The Mid-Tier Glory of Extraction 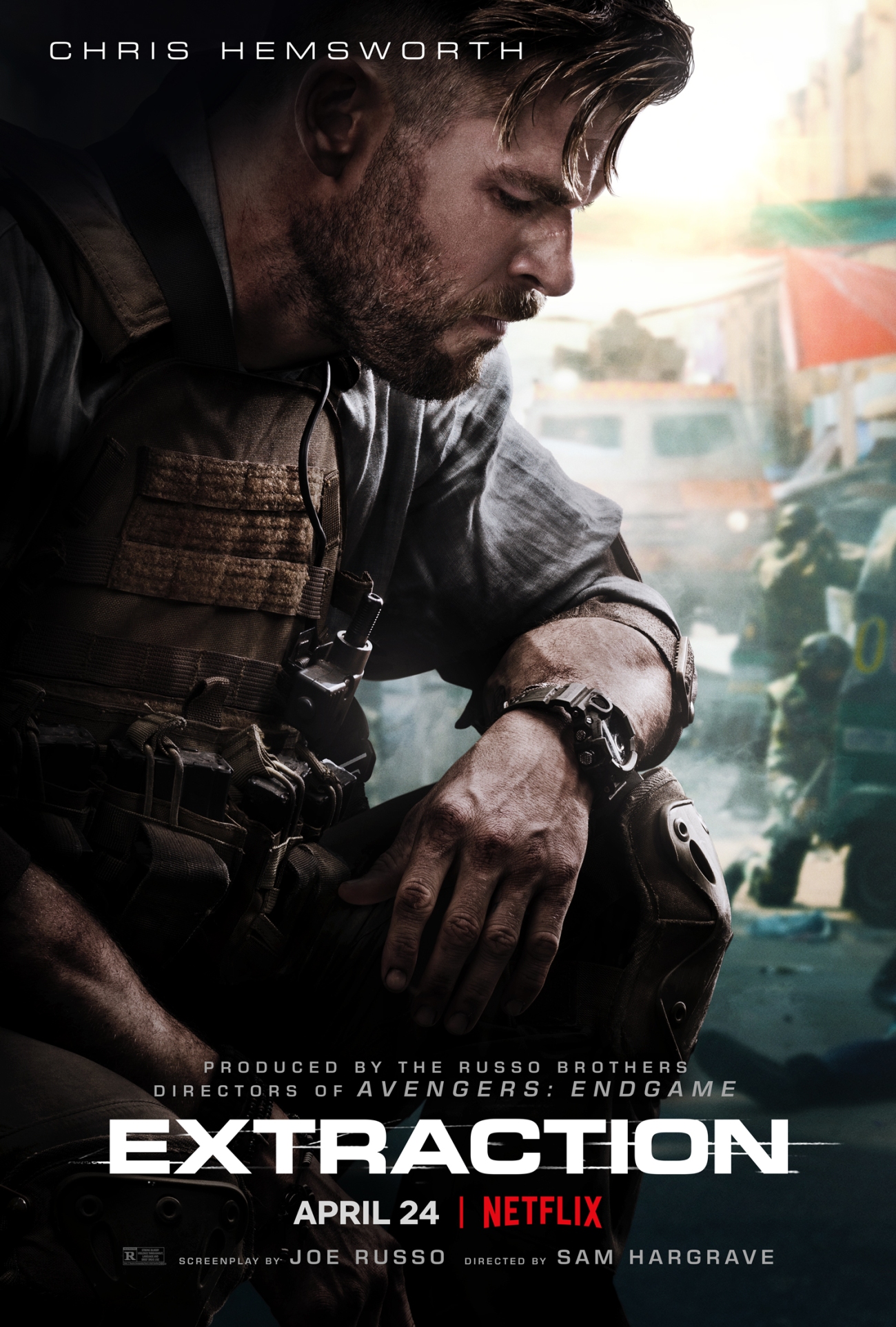 Well, the Apocalypse is still going strong out there, so the choices for quality new movies is pretty damn slim. But, Netflix is still chugging along, releasing their glut of original films that they bought distribution rights to, along with some studio films that apparently didn’t show much promise to stick around and wait for real theaters to open back up. And, our latest film to grace the streaming service that has deliver a whole slew of solid C+ films from famous directors, and a few legitimately great ones too, is Extraction, a bloody and brutal action movie that seems to have time-traveled from the mid-nineties, staring Chris Hemsworth. Now, the fact that Chris Hemsworth is the star seems to be the primary source of interest with this film, and I suppose the vaguely important idea that it’s produced by the Russo Brothers. But, when this film landed on my front-page of Netflix I found myself a little curious about it. This didn’t seem to be one of those movies that got scooped up after studios started freaking out about the theater closures, and it wasn’t one of these weird Netflix vanity projects that keep cropping up where directors are allowed to make whatever insane project they want to, with seemingly no studio interference, so this movie seemed to be coming out of left field. But, after a tad of Wikipedia research, it turns out that we have a John Wick situation on ours hands, because this film is the creation of Sam Hargrave, a stuntman and stunt-coordinator who has worked on several of the big MCU films. So, it seems like he and Hemsworth must have hit it off, and he impressed the Russos enough to help bring this little action movie to life. Unfortunately, this ain’t John Wick. But, that’s not necessarily a bad thing.

The film largely tells the story of a guy named Tyler Rake, a former soldier who now operates as a high-profile mercenary. And, he’s contacted by one of India’s biggest drug dealers, Ovi Mahajan, because one of Rake’s specialties seems to be rescuing people and extracting them from dangerous situations. And, it turns out that Mahajan’s son, Ovi Jr, has been kidnapped by his rival, Amir Asif, and has been taken to Bangladesh. So, Rake heads to Bangladesh, and is able to rescue Ovi rather easily, taking care of Asif’s men and begins trying to escort the boy back home. Unfortunately, things aren’t exactly as they seem. Because it turns out that Ovi’s father has also sent one of his own mercenaries, a man named Saju, to abduct Ovi and bring him back on his own, because Ovi’s father has been arrested and doesn’t have the money for the ransom, nor the extraction. But, Rake assumes that Saju is there for more nefarious purposes, and the pair end up fighting, leaving Saju badly wounded, before Rake and Ovi flee again. They fight their way through a series of corrupt Bangladeshi police officers who are all controlled by Asif, and even find themselves attacked by a gang of children and teenagers, all trying to prove themselves to Asif. Rake fights them all off, and ends up having to call in a former friend of his, Gaspar, who s actually living in Bangladesh. Gaspar shows up and takes both Ovi and Rake back to his home, where the two mercenaries catch up, and Rake starts having some heart to heart’s with Ovi.

Rake tells the boy about the young son he lost to cancer, and Ovi talks about how place in his family, with a father who seems him more as an object than a person. But, these nice talks are cut short when Rake goes to chat with Gaspar, and finds out that the man is intending to kill Ovi and cash in a massive bounty on the boy’s head. Rake and Gaspar fight, and in the struggle Ovi shows up and shoots the man dead, meaning both he and Rake now need to flee again. And, seeing no alternative, Rake ends up calling up Saju, realizing that the man was just trying to keep Ovi safe. Saju comes to work with them, and they formulate a plan where Rake will cause a distraction so that Saju can get Ovi out of the city and through a massive check-point that’s searching for him. This leads to a massive gun-fight on the streets of Dharka, all while Asif watches the events unfolding from afar. After some close calls Saju and Ovi are able to get past the checkpoint, and head to a helicopter that has been brought in by another colleague of Rake’s, Nik Khan, while Rake tries to make it as well. However, he’s attacked by one of the teenagers from the gang earlier in the story, and he manages to get a seemingly mortal wound off on Rake, who falls off a bridge. But, the distraction works, and Saju is able to escape with Ovi, while Khan goes on to get some revenge by murdering Asif in a bathroom sometime later. And, we’re left with the idea that Rake possibly survived the whole ordeal, seemingly leaving itself open for sequels.

I wasn’t exactly expecting a miracle with Extraction. By and large Netflix’s original films have been pretty hit or miss, with the vast majority just being sort of fine, with the occasional actually great film peeking through. And, from the very beginning, this film just seemed to be a middle of the road action flick. Which, is what it ends up being. Hemsworth is a charismatic actor, and it definitely seems more recently that he’s going to be able to escape the shadow of Thor, at least more so than earlier in his career. I still prefer my Hemsworth with  little more comedy, but he’s a solid action star, and this film really serves as a showcase of “Chris Hemsworth, serious action leading man.” Which is probably the film’s strongest point. The action in the film is really solid, giving some shockingly violent and visceral moments that really manage to spice up and otherwise run of the mill film. I don’t know if Hargrave is going to become as beloved an action-filmmaker as the duo behind John Wick, but it’s clear that the guy has an eye for directing action in a way that’s incredibly tense, impressive, and followable, which is weirdly a tall order these days. Other than that though, the film isn’t much to write home about. The plot is fairly boilerplate, and it certainly falls into that silly Hollywood trope of wildly misrepresenting foreign countries, sending their American hero through some cartoonish slums shot through a sepia filter. But, none of that manages to fully derail the film, just give it some hiccups.

I feel like this isn’t the first time I’ve said it, but I do kind of miss films like this. I had a good time watching Extraction. It’s dumb as hell, but it was a good time. I’ll never think about it again, and almost certainly never watch it again. But, it was a solid little mid-tier action movie. Which, is largely something we just don’t see anymore. The Hollywood system is incredibly broken at the moment, and it’s entirely possible that this COVID-19 pandemic will either completely break it, or force it to evolve into something completely foreign to what it is now. Because there’s no longer any room for anything other than massive blockbusters. That’s what the model has shifted towards, and every film has to be the biggest thing you’ve ever seen, a start to massive franchise that will captivate people for years, or else it’s a complete failure. Some lower-grade stuff is still getting released straight to VOD, or you get the smaller indie studios like A24 that are still around just to win awards. But, I can remember a time when a movie like Extraction would have opened in August, done fairly well, and then played on HBO for months. And, I would have watched it a thousand times. It’s slight, dumb, but watchable. And, we just don’t get movies like this anymore. It’s a purely nostalgic response that doesn’t really stand up to much scrutiny, but I kind of recommend this movie if you too are feeling that itch for some good old-fashioned dumb action.

Extraction was written by Joe Russo, directed by Sam Hargrave, and released by Netflix, 2020.