Hi there everyone, and welcome back for another thrilling installment of Bat Signal, my never-ending mission to read every issue of Detective Comics that has ever been published, in random order, and with basically no context. We’re taking a trip back into the Golden Age this week folks, into the earlier days of the Dark Knight, back when the book was very different, the tone was all over the place, and the whole medium of comics hadn’t quite been figured out yet. But, longtime readers of this project may know that I have a certain soft-spot for these unhinged Golden Age comics. Perhaps it’s the novelty of how strange they are compared to their more modern descendants, or perhaps it’s just because they’re typically a lot of a fun in a strange way, but whatever the reason, a good Golden Age book is exactly what I was in the mood for this week, and the Random Number Generator gods have smiled upon us.

The issue begins with Bruce Wayne and Dick Grayson attending a performance by a purported psychic called Carlo, the Man Who Can Read Minds. Not the catchiest moniker, but his skills do impress young Dick. That is until they leave the show and Bruce immediately explains that it’s all a con, and that Carlo’s assistant helped him identify the various items people were holding up through a series of trigger words. Dick’s disappointed, but  not as disappointed as Carlo himself, who drives home from that show in a torrential downpour, wishing that he actually did have psychic powers. And, his prayers are answered when his car suddenly swerves out of control, and crashes through a billboard advertising his own show. Carlo is raced to the hospital, where an emergency brain surgery takes place in order to save his life. And, while the surgeon is preforming the operation the hospital is truck by lightning, causing the lights to go out. The procedure is very time-sensitive, so the surgeon ends up completing it by candle-light, and in the process apparently does something to Carlo’s brain that makes him telepathic.

Carlo discovers that he’s able to hear the thoughts of the various other patients who are apparently placed outside to heal, and realizes that this is his chance to get rich. As soon as he’s discharged from the hospital he begins making money hand over fist by gambling and participating in gameshows, using his abilities to read the minds of those around him. And, pretty quickly, the thrill of these events starts to diminish, and Carlo turns to crime. He begins a short-lived crime-spree, which ends up catching the attention of Batman and Robin. One night while out on patrol the duo end up spotting someone rifling through an office, and swing in to investigate. Sure enough, Carlo is robbing the place, and ends up reacting to Batman in shock. Batman feels like he recognizes the man’s voice, but before he can think about it too much, Carlo announces that he knows Batman and Robin’s secret identities. They assume he’s bluffing, and think about their own names, giving Carlo the information he needs. He tells them their real names, and they both become too stunned to stop Carlo as he flees.

The next day Dick and Bruce are hanging out in Wayne Manor, trying to figure out how Carlo could know who they are, when Dick reads an article about Carlo, saying that he’s now doing his show without a helper. At which point Bruce finally realizes that the voice he recognized from the criminal was that of Carlo. So, they go to his show that night, and end up figuring out that he’s picking prominent people, and using his new ability to read their minds and steal their things. Unfortunately, Carlo recognizes Bruce and Dick in the audience, and realizes that they’ve figured out who he really is too. So, he sends them a package containing a live bat and a note. He informs them he’s going to go to Miser’s Island, the home to an eccentric millionaire, and rob him. But, if Batman and Robin show up he’s going to expose their secrets to the world.

However, the Dynamic Duo decide that they still have to do their jobs, and suit up one last time in order to stop Carlo. They hop into the Batplane and fly to Miser’s Island, making their way to the eccentric millionaire’s house. And, as soon as they barge in they find Carlo waiting for them, with a gun. Robin is able to think quick, and throws some sort of metal crest at Carlo, deflecting the bullet, and giving Batman the chance to grab a sword off the wall. Carlo too gets himself a sword, and the two begin fighting. Carlo does quite well, since he’s able to read Batman’s thoughts and see what he’s going to do at all times, but eventually Batman is able to swing wildly enough to cause both of the sword to fly out of their hands. Carlo wants to part in fighting Batman hand to hand, so he triggers a secret trap door, sending Batman down into a dungeon, while he knocks Robin unconscious and carts him off, sticking him in an old bathysphere outside, and dumping him into the ocean.

Batman finds himself in a room where the walls quickly begin closing in on him, but he’s able to escape ludicrously. Because this room also has an oil-lamp in it, and he’s able to use his belt to snag the lamp, dump the oil on the ground, and mess with the moving walls’ roller. At which point Batman is able to escape, and comes across Carlo talking the millionaire who owns the island inside of a glass box. Batman realizes that Robin is in danger, and makes his presence know, causing Carlo to flee. Batman is able to break into the strange glass cage that the millionaire is in by using a diamond-encrusted Batarang he has, and then races off to find Carlo and Robin. Which, is the same place, because it turns out that all of the billionaire’s riches are kept in a sunken ship right where Robin’s bathysphere was put. Carlo plans to use an acetelyne torch to get inside, but Batman just knocks him the hell out, and dives into the ocean with the torch. He manages to free Robin, and while he’s submerged Carlo gains consciousness, and attempts to flee. However, the millionaire arrives and shoots Carlo. The psychic falls into the ocean, and when he washes to shore does his best to write a message in the sand, revealing Batman’s identity. But, the surf washes it away, so Batman and Robin are free to continue fighting crime! 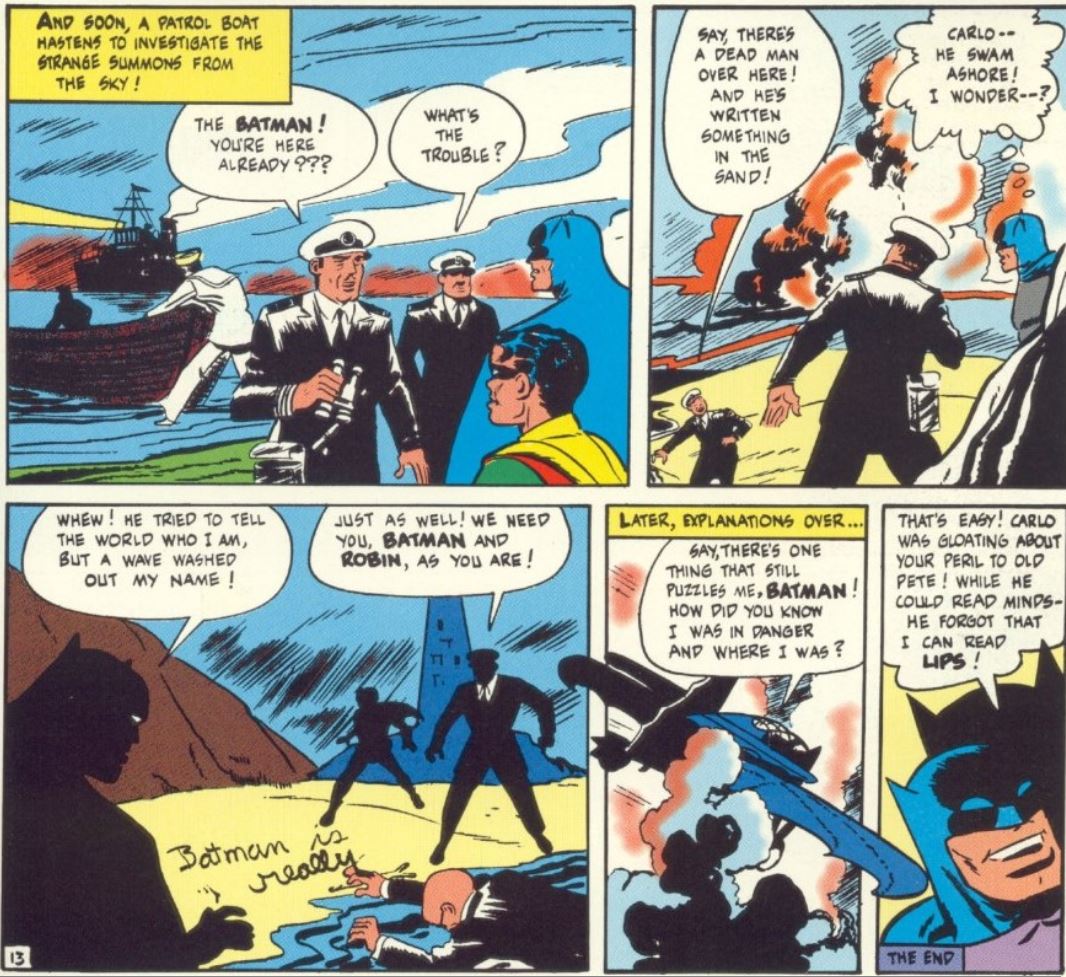 Like I said up top, this issue is a whole lot of fun. It’s very weird, in the same way that a majority of the Golden Age comics that I’ve covered so far are. I mean the villain gets psychic powers after a botched brain surgery by candle-light. And, while I can think of countless other comics I’ve read that revolve around “villain has figured out Batman and Robin’s secret identity and is trying to use that to blackmail them,” I wonder if this was one of the first, since it comes so early in their history. It’s obviously a story without much stakes, since of course it isn’t actually going to happen, and everything is going to get wrapped up nicely by the end, but it works well in this story. Especially the whole psychic thing, seeing Carlo match wits and brawn with Batman, all because he knows exactly what he’s going to do next. So, take a decent story and add in goofy stuff like Batman being put in a room with crushing walls, Robin getting trapped in a bathysphere, and the aforementioned brain surgery and you end up getting an extremely fun little story.

“The Man Who Could Read Minds” was written by Don Cameron, penciled by Bob Kane, inked by Jerry Robinson and George Roussos, lettered by Ira Schnapp, and edited by Whitney Ellsworth, 1942.