We’re apparently having a spooky week here on Puzzled Pagan Presents. I’m not exactly sure why February and March have become quite so full of horror movie releases, other than the potential idea of programming against the glut of romance movies that come out around Valentine’s Day, trying to get people who are not going to be seeing those types of movies. But, whatever the logic is, we’ve gotten quite a few horror movies already this year, and most of them have been pretty great. So, when I started hearing good things about this creepy cabin fever horror movie known as the Lodge, I figured I’d be giving it a shot. And, that was enhanced by the fact that I had become kind of confused about the release of this movie. I tried doing a bit of research, but kind of came up blank, because I’m very curious about the marketing of this movie. I go to the theaters essentially every weekend, and I remember seeing a trailer for this movie ages ago, potentially last Spring, and it looked like a creepy and mysterious horror movie about a woman being trapped in a house with two kids. Then, I stopped seeing the trailers, and assumed maybe something had happened to it, and it didn’t actually get released. But, a few months ago the trailers started popping back up, but now featuring quite a bit of details about suicide cults, which hadn’t been a part of the first trailer. I became very fascinated with this movie, wondering if cult stuff had been added in the ensuing months between the trailers, or if they just decided to completely change the tone of the marketing to let people know there were cults in this movie. And, sadly, I don’t know why I’m telling you all of this, because I didn’t get any sort of answer, just a weird mystery. But, I did get an incredibly dark and spooky little horror movie to talk about! Segue!

The Lodge is primarily the story of two young children, Aidan and Mia, who begin the film after something truly horrible happens. Their father Richard has left their mother Laura in order to pursue a relationship with a woman named Grace, who is the sole survivor of a suicide cult that Richard had been researching. And, after officially asking for a divorce, Laura commits suicide, throwing the children into a state of depression. Several months later though, Richard is looking to move on with their lives, and plans to head to a remote cabin in the woods with the kids and Grace, hoping to have the kids get to know her. The kids are very against this idea, but they kind of get pushed into it, sending all four of them out to the cabin for a long Christmas trip. Unfortunately, almost immediately Richard learns that he’s needed back in the city for work, and Grace offers to stay with the kids for a few days, figuring she can find a way to bond with them. The kids are very against spending time with Grace, but they slowly start to all get along, eventually spending a night watching movies together while Aiden gives Grace a mug of hot chocolate.

But, the next morning they awaken to something strange. The power and water to the cabin are not working, and all of their belongings are missing. There’s very little food left, none of their phones are charged, and Grace’s medication is gone. She assumes that the kids did it to prank her, but they promise that they had nothing to do with it, and are just as freaked out as her. And, that fear only grows when they start to realize that all of the clocks in the house are stuck on January 9th, as if they’ve missed a substantial chunk of time. Which is when Aiden informs Grace that he had a dream that they died from a gas-leak the night of the movies. Grace beings panicking, especially when her medication withdrawals start giving her vivid nightmares and fits of sleep-walking, exacerbated by her suddenly hearing the voice of her dead father telling her to “repent.” She attempts to flee into the wilderness, but just ends up back at the house, where she finds a newspaper article seemingly saying that she and the kids died from carbon monoxide poisoning. And, as Grace begins leaning into her past, believing that the ghosts of her fellow cult members are haunting her and that she and the kids are trapped in purgatory, we learn something horrible. This isn’t really happening. Aiden and Mia have planned all of this, they’ve hidden everything, and drugged Grace the night of the movies. They’re hoping to push her to suicide in some sort of revenge for their mother, but things are quickly getting out of hand. Grace becomes more and more unhinged, and when Richard ends up arriving back from his work, she assumes he’s some sort of trick, and kills him. The children are then forced to reenact the suicide ritual that Grace’s cult performed, realizing that there’s no way to make Grace realize none of this was real.

Going into this movie, I wasn’t exactly expecting a fun little romp. The trailers, both versions, looked pretty terrifying, and were accompanied by a bunch of pull-quotes informing potential viewers that it’s such things as “nerve-shredding.” But, I don’t really think I was even expecting something this dark. A movie starting off almost immediately with a parent committing suicide is a pretty great sign that we’re in for a rough sit, and the film does a pretty great job at making things even darker and crazier from there. I was genuinely unsure of what was actually going to end up happening in this movie as it was trucking along, completely believing that this could have been something legitimately mystical, or something horrifyingly real. And, the final reveal that none of this is happening the way we’ve been made to think it was happening, really caught me off guard, and makes the film one of the more twisted things I’ve seen in ages. Everyone is great in the movie, especially the kids who are given the difficult task of being destroyed by grief, and then essentially asked to be bad actors just to make all the deceit much more confusing. It’s a rough movie, and certainly isn’t going to work for everyone, but it really ended up working for me, delivering one of the creepier theater-going experiences I’ve had this year.

And, I think a big part of that is all due to the horrifying realization that these children are torturing someone into suicide. These kids have had something truly horrible happen to them, the suicide of a parent. And, instead of dealing with these emotions, their father has basically told them to just move on and accept the woman that they believe is the reason their mother killed themselves. So, they decide to do something horrible. They believe completely that Grace is responsible for the death of their mother, essentially something tantamount to murder, and have decided that it’s up to them to get some sort of justice for their mother. But, there’s no justice there. Instead, they’ve concocted terrible revenge, something to punish someone else for something they didn’t actually do. It’s probably indisputable that Grace’s relationship with Richard is what pushed Laura to kill herself, but that doesn’t necessarily mean that Grace should be held accountable for that, and definitely doesn’t mean that these children should force her to kill herself as some sort of psychotic sense of fairness. And the fact that this decision made sense to these kids ends up being the scariest outcome that this film ever could have had. 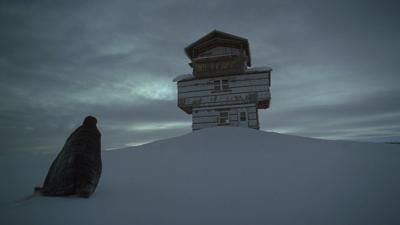