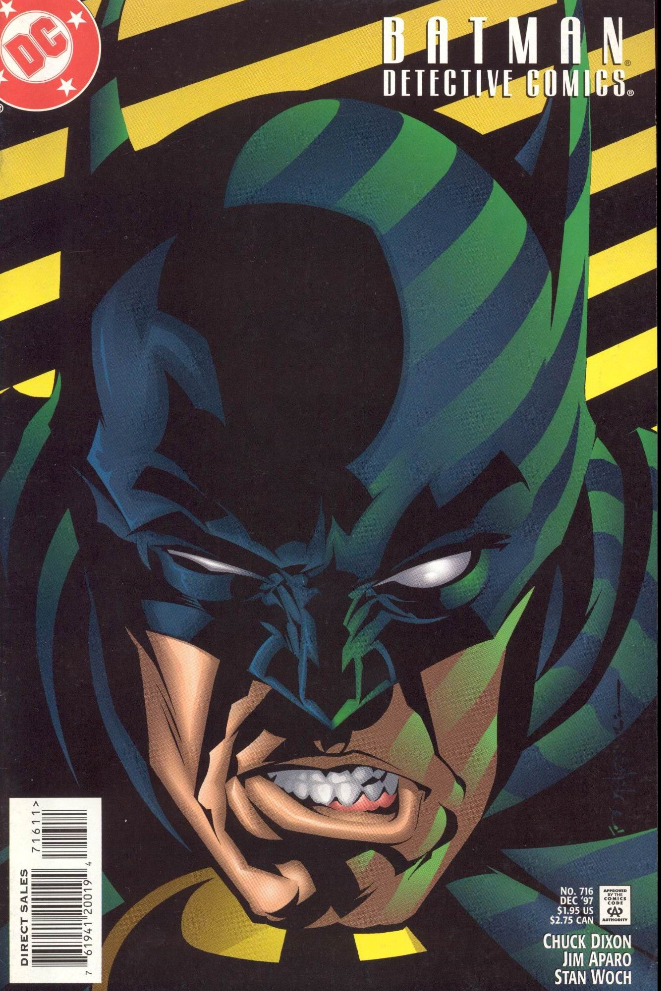 Hello everyone, and welcome back for yet another installment of Bat Signal, my never-ending mission to read every single issue of Detective Comics over published, in random order, and with basically no context. It’s time for the last Bat Signal entry of the year, and the Random Number Generator gods have decided to throw us a bit of a curve-ball this week, folks. In the past we’ve hit a handful of issues that don’t quite feel right, that don’t end up featuring Batman too much, basically just having him be a supporting character. That’s not necessarily a bad thing, and has led to some fun stories, it’s just a little unexpected and jarring. And, that’s what we have this week, an issue that really doesn’t feature much Batman, instead focusing on a little examination of a random citizen of Gotham City, and his one interaction with the Dark Knight. Which, as you might guess, leads to a pretty eventful period in the guys life.

The issue begins at the end, with Batman standing solemnly n a morgue with a man wearing a Gotham Knights jacket and rocking a great late-nineties ponytail. The man is quite distraught at whoever is in the drawer at the morgue, yelling about how they’re gone too soon, and how young they were, all while Batman just kind of stars at him stonily. The man thrashes around, furious and depressed, as we hop backwards in time a day to learn that this man is Dusty Howell, an ex-con who has fallen on hard times. He’s apparently made a pretty terrible bet on the Gotham Knights, which didn’t work out for him, meaning that a local bookie named Spanky Dallas, who has come to make good on the bet. Dusty is pretty terrified at the prospect of paying up to Spanky, and promises him that he’ll have the money, somehow. 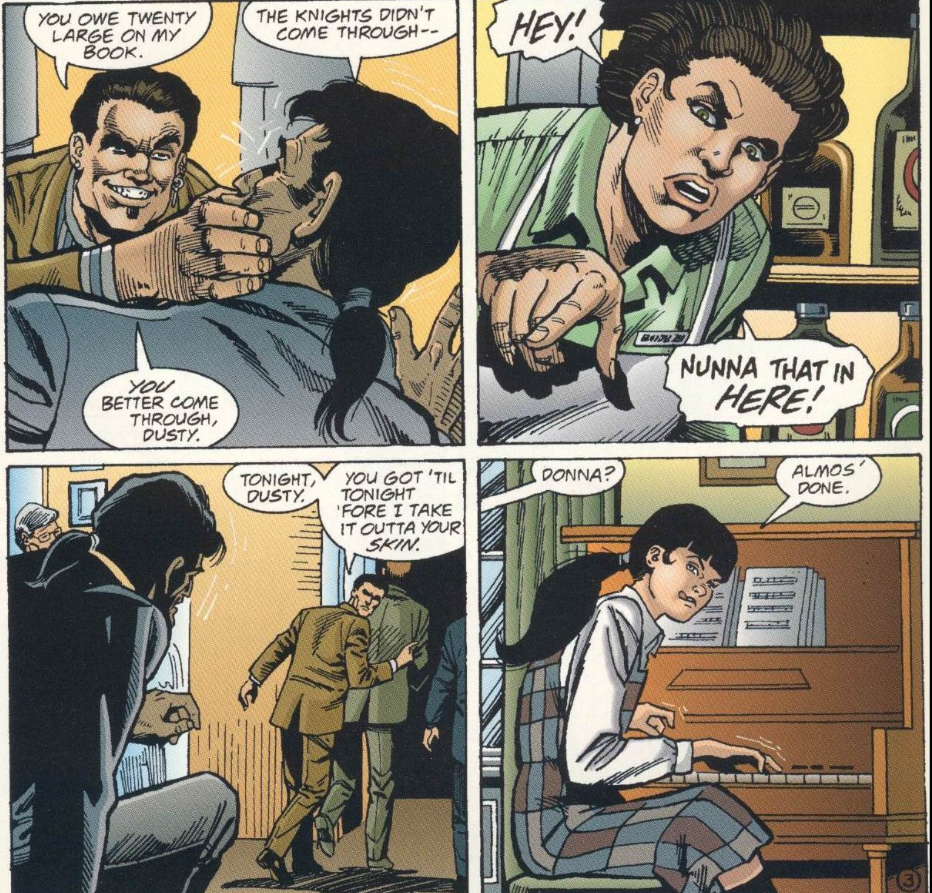 We then meet Donna, Dusty’s young daughter who loves playing the piano, and who has a big recital coming up. She’s been practicing for months getting ready for this big show, and is so proud to show her father how far she’s come. Which, is going to be a problem, since things aren’t going well for Dusty. He’s in desperate need for money, and his hot-temper ends up getting him fired from the auto-parts store that he’s working in. Meaning he’s going to need to find some other way to get a lot of money, quickly. Which, is of course going to lead to one specific path in Gotham City. And, since Dusty is an ex-con, he finds his way into a criminal scheme pretty quickly. He meets with a former acquaintance, Hap, who informs him that he has a job that night, and is in dire need of a fourth man. But, he gets cold feet when he starts to think about Donna, fearing being sent back to prison.

Unfortunately, things change when he calls home to check on his wife and Donna. Because it turns out that Spanky has stopped by the apartment to threaten them. So, Dusty decides to take Hap up on the job. He gets the details and stops by Hap’s apartment where the four-man crew begins to prepare for their little heist. Because Hap has came up with a plot to rob a department store, specifically at the end of the day when they compile all of the cash. Unfortunately, while Dusty is out plotting, we see that Spanky and his boys have arrived at Dusty’s apartment to take his wife and daughter hostage, just in case Dusty can’t get them the money in time. But, Dusty is confident that the robbery is going to go off without a hitch. Which, of course, is a sign that it won’t. So, yeah. Things aren’t going swell. An alarm was triggered, which causes the thieves to escalate things, taking some people hostage and clearing out the rest of the department store. Which, obviously, draws the attention of the police. Which, then draws the attention of the Batman. Commissioner Gordon just kind of stalls outside with the officers, talking about dreaming of moving to Ohio, when Batman arrives and slips into the building. He begins sneaking around through the department store, taking down some of the thieves. And, while Dusty is standing guard, he notices Batman slip past him, causing the fledgling thief to freak out. He races and tells the other guys, watching the hostages, that he saw someone running around, so Hap decides to come help him search.

But, when Dusty finally mentions that the shadow he saw was vaguely bat-shaped, Hap starts to freak out, firing his shotgun wildly in order to draw Batman out. And, when the Dark Knight finally does arrive, Hap forces the two to flee. Unfortunately, Hap’s shoelace gets caught in an escalator, causing him to wipe out, leaving Dusty alone. And, instead of helping him, Dusty just grabs one of the bags of cash, and flees from the department store, leaving Batman to fight the rest of the thieves. Dusty flees through the the store, making his way to a subway stop, and getting back home. Which is when he finds Spanky and his men holding his wife and Donna hostage. Dusty freaks out, and throws the bag of cash at Spanky and his men, causing them to lay down their guard and cheer over the money. Which is when Dusty takes his chance, and starts firing his gun at the men, killing the two goons. But, Spanky is left alive, and he’s about to kill Donna and Dusty’s wife. But, Dusty throws himself in front of the bullets, getting himself killed. Which is when we realize that that scene in the beginning of the story was actually Dusty’s ghost looking at his own corpse in the morgue, which is a little goofy, but whatever. 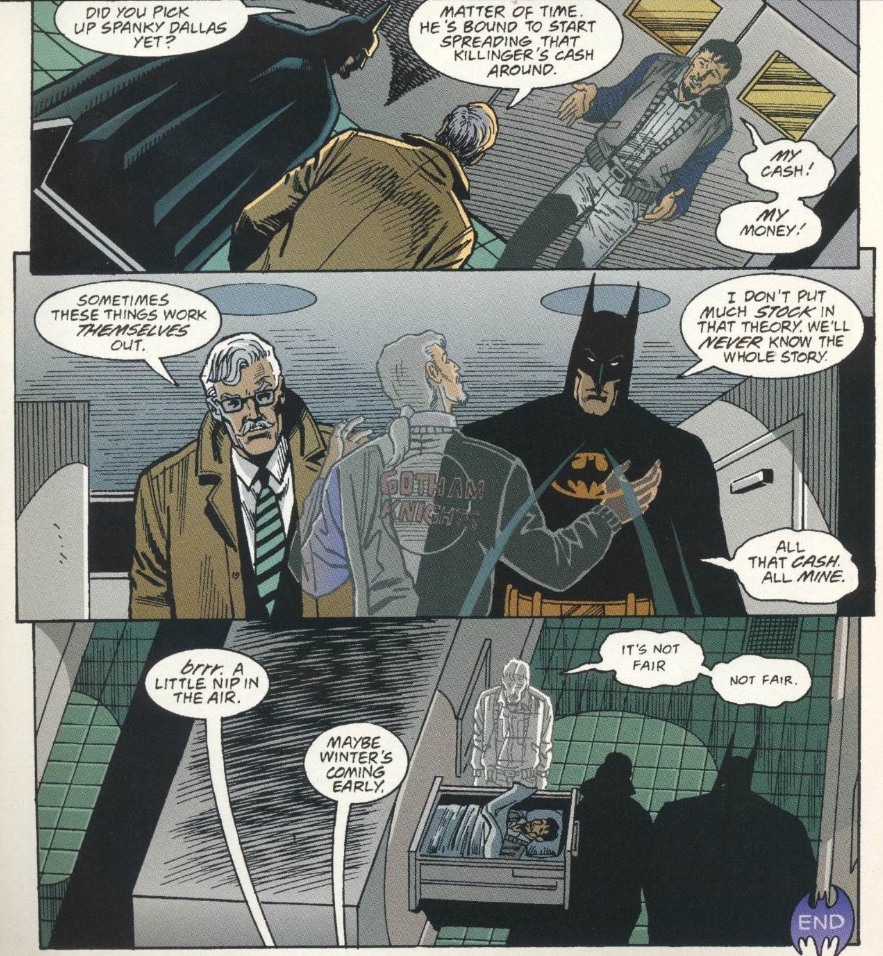 This is a strange issue, but I generally really enjoyed it. It was a little odd at first seeing an issue that really didn’t feature Batman at all, especially when the cover to the issue is literally just a crazy close-up of his face. But, instead we ended up getting an interesting look into what it’s like to be a random citizen in Gotham City. Which, is an insight that doesn’t get shared too often. Seeing a guy, completely down on his luck but also largely due to his own temper and incompetence, get drawn back into a life of crime is an engaging enough story, the type of story that makes for great prestige TV. But, to also throw in Batman, and the inherent fear that one would feel when foolishly attempting a life of crime in Gotham City make it all that much more fun. I’m not exactly the biggest fan of “scary Batman,” but seeing occasional stories like this, where he’s this ominous figure, barely seen clearly, just slipping around the shadows, taking criminals down have their own certain pleasure. I do think that the whole ending, with the ghost, is a tad ridiculous, but it doesn’t take away from the unique flavor of the issue. 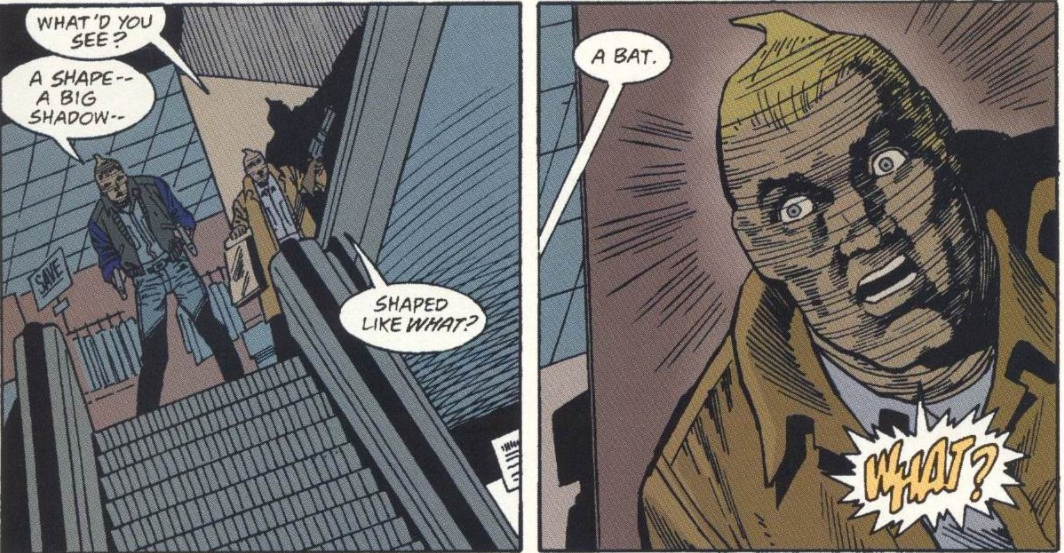