Hi there everyone, welcome back to yet another installment of Bat Signal, my never-ending quest to read every single issue of Detective Comics ever published, in random order, and with basically no context. We’re taking a trip back to the earliest days of Batman this week, giving us a very goofy story featuring one of Batman’s biggest arch-enemies, the Joker! And, since it’s a classic Batman story, that means we get a Joker who is actually fun, not cutting either his face, or other people’s faces off. Plus, as you can tell from the cover, we’re getting some red hot horticultural action this week. Buckle up folks.

The story begins by showing us that the Joker and his men have taken over a popular flower shop in Gotham City known as Pettle’s. They’ve kidnapped the man who ran it, Pettle, and have been dolling the Joker up in makeup so that he can run he shop. But, this scam wasn’t for the Joker to get a 9 to 5, it’s actually fairly elaborate. Because apparently this flower shop is frequented by the rich and powerful of Gotham, so when they come in guy some flowers, they lay in wait for their trick flowers to get to work. We see the valet of a rich man buy several pots of flowers, and then shortly everyone in the house is knocked unconscious, giving the Joker and his men ample time to break into the home, and steal everything that isn’t nailed down. And, when the rich folks wake up they find their things stolen, and a Joker card in their hands. So, the police inform Batman and Robin of the crimes, and they decide to go to a flower show, since the appearance of the flower pots at the crime scene has gotten under Batman’s skin. And, as soon as they enter the flower show, they find the Joker and his men robbing people inside.

Batman and Robin begin fighting the Joker and his men, who all happen to be wearing gas masks. But, the longer Batman and Robin spend in the room with all the unconscious bodies, the weaker and sleepier they feel. And, eventually they both just end up passing out. The Joker and his men, victorious, tie the Dynamic Duo up, stick them in a nearby elevator, and cut the cable, sending them plummeting down to their death. But, it’s apparently the tallest building in town, because Batman and Robin have time to wake up, realize what’s going on, and then trigger the emergency brake on the elevator before they’re dashed to pieces.

When they get out of the elevator though, they find that the Joker and his men are long gone, but they’ve left behind their flowers. Clearly the flowers are key to this whole drugging thing, so Batman and Robin begin investigating both the flowers from the show and the first break-in, and realize that they both come from Pettle’s. So, they head over to the shop, and begin staking it out. And, when they notice another rich and powerful man of Gotham come to the flower shop, they wait it out until the Pettle delivery van leaves, surely to go rob them. The Dynamic Duo then race into the rich man’s home, and sure enough find the Joker and his men again. But, they apparently haven’t learned anything, because the Joker is able to hit them with a gas gun, knocking them out. At which point they tie the crimefighters up, stick them in the room with the rich folks, and then attach the kitchen’s gas main to the air supply, hoping to suffocate everyone. Which, is a tad extreme. Batman and Robin manage to free themselves from the room, taking a door apart before they die, and rescuing everyone. At which point it becomes clear that they’re going to have to take down Pettle’s. But, Batman’s worried that they may have some other hideout as well, so they aren’t just going to storm the flower shop. Instead, the next morning Bruce Wayne and Dick Grayson enter Pettle’s, and buy some flower pots. They bring them back to Wayne Manor, and quickly discover that the pots actually contain a condensed chloroform, which gets released on a timer, meant to knock them out so the Joker can show up later and rob them. They take the thing apart, and then work with Alfred to fake being unconscious, watching as the Joker and his men arrive at the Manor and steal things.

They then suit up as Batman and Robin, and give chase, following the Joker’s truck to a hideout in the middle of the vast wilderness outside Gotham. The Joker and his men are pleased at such a big score, plus the fact that they theoretically killed Batman and Robin. Which is quickly ruined when Batman and Robin come racing towards them, beginning a battle with the Joker and his men. It’s a tense fight, and eventually the Joker realizes that they’re outmatched. So, he and his men flee to a greenhouse on the property with bullet-proof windows, where they keep the real Pettle, and decide to just wait them out. But, Batman has a different idea. He and Robin begin wandering around the property, finding the drums of chloroform that they have. Batman then hooks it up to the furnace heating the greenhouse, which eventually knocks out the Joker and his men. Batman and Robin are then able to stroll in, arrest the Joker, and send him patronizing letters to him in prison. There was something charming about this issue, but boy is it weird. This era of the comic, when they just didn’t seem to know whether this should be a dark book for older audiences, or a goofy book for kids, is really fascinating, and I’ve grown to really appreciate it. Because where else am I going to get a Batman story that features the Joker owning a flower shop, and also him attempting to kill several people with natural gas? It’s a bit of a tonal whiplash at times, but it’s pretty fun as well. Batman and Robin are kind of dopes in this one, not figuring out what’s going on until shockingly late in the story, and being knocked out by gas two different times without maybe thinking about wearing gas masks of their own. Which, gives an even weirder element to this story when viewed from the present. Because the Batman of today is a hyper-competent superhuman who is prepared for every outcome, and defeats any obstacle. But, here we have a goofy Batman bumbling his way through a case involving flower-related heists. It’s fun, and a breath of fresh air.

“Slay ‘Em with Flowers” was written by H.L. Gold, penciled, inked, and colored by Jerry Robinson, lettered by George Roussos, and edited by Jack Schiff, 1943. 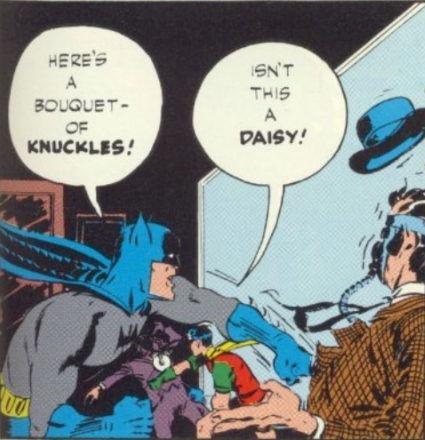