A Beautiful Day in the Neighborhood and Nostalgia 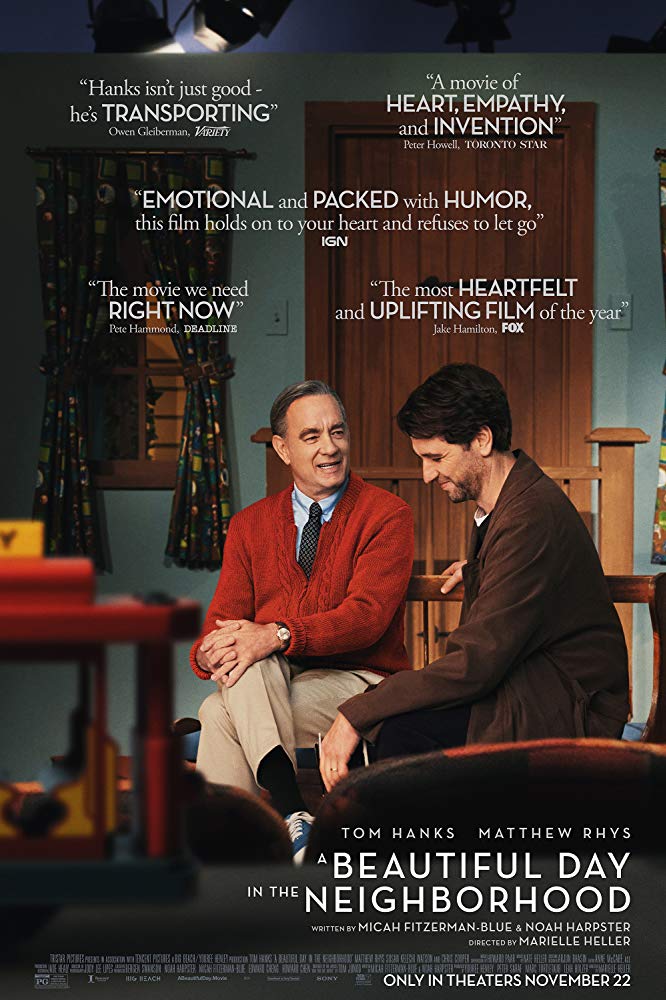 I’m going to start things off with by admitting something that often baffles and angers people. I, to my knowledge, have never seen a single episode of Mister Roger’s Neighborhood. I’m not quite sure why, but I don’t remember ever having that show be a presence in my life, and even if I did see a handful of episode it clearly didn’t leave any mark on me, especially compared to just about everyone else I ever meet. Mr Rogers is this weird, massive cultural blindspot for me, a person that seems to mean quite a lot to quite a lot of people, but who just doesn’t hold any real attachment with me. I respect the man and what he did both for children’s entertainment and development as well as public broadcasting as a whole, but there’s no real emotion there. Which is why I never saw the documentary that was apparently making people spontaneously week last year, Won’t You Be My Neighbor, and why I really didn’t plan on seeing the film I’m discussing today, A Beautiful Day in the Neighborhood. But, because I’m a crazy person and have a near pathological desire to go to the theater every weekend, I found myself with slim pickings this weekend, and ended up hitting up a screening of Beautiful Day in the Neighborhood, not quite sure what to expect, but kind of curious to see what it would be like to see a movie that elicits such a strong emotional reaction in people, but which I’m going in with absolutely no emotional baggage. And, let me tell you, it’s a weird experience.

The film is largely the story of a journalist named Lloyd Vogel. Lloyd is a rather cantankerous and emotionally stunted investigative reporter, working for Esquire, who gets a very unexpected assignment the day after getting into a fist-fight with his estranged father at his sister’s wedding. Because of his difficult personality, his editor is looking to punish Lloyd a bit, and have him go do a 400-word puff-piece about Fred Rogers for a series they’re doing on American heroes. Lloyd finds the whole thing to be a little ridiculous, since he’s used to serious journalism, not interviewing goofy children show hosts, but he agrees to travel to Pittsburgh and interview Rogers. And, right away, Lloyd is put off by the man, assuming that his gregarious kindness is a front for some darker issues lurking beneath the surface. But, he continually finds that Rogers seems to just be a very empathetic and kind man, who turns the interview around on Lloyd, digging into his own life, specifically his troubles relationship with his father. Lloyd becomes obsessed with Rogers at this point, watching countless hours of his show and interviews, hoping to finds some crack in his sugary exterior. They meet again in New York, but Lloyd still isn’t able to find any dark truth to Rogers, and ends up getting worked up emotionally, ending the interview and returning home. Where he finds his father waiting for him with his new wife, spending time with Lloyd’s wife Andrea and their son. This causes Lloyd and his father to get into an argument that results in his father having a heart attack.

Lloyd is completely unable to deal with his father or the possibility that he’s about to die, and is unable to cope with the reality that his father abandoned him and his sister right as his own mother began to die herself. So, lost and adrift, Lloyd heads back to Pittsburgh to meet with Rogers once more, where he ends up fainting on the set, having a hallucination where he’s become part of Rogers’ show. And, after that cathartic hallucination, Lloyd finds himself in Rogers’ home, being cared for by the man. He and Rogers then go have lunch, and finally have a real heart to heart, where Lloyd opens himself up about his problems with his father. Lloyd then returns home, apologizes to his wife, and makes up with his father. He begins caring for his father, all while writing a now massive piece about the importance of Mister Rogers, and what he has done for American culture. Rogers himself then comes to visit Lloyd’s family as his father’s health begins to truly decline, helping them through that problematic time, and helping Lloyd really connect with his emotions.

I think the film is good. But, I also think that a lot of the emotional heavy-lifting comes from your own personal nostalgia of Mister Rogers. As I watched the film I heard by audience occasionally sigh with happiness when we would see things like the old set, or Tom Hanks doing the impression, and it just didn’t really mean anything to me. The film is extremely emotional, almost to a schmaltzy degree, and it really primes you with your happy memories of childhood and Mister Rogers’ show. But, without that experience you end up just kind of sitting there, wondering why we’re lingering on certain shots, and just generally not quite getting it. I find myself somewhat in the journalist’s position, kind of questioning if Rogers really was this decent, or if it was all an act, but our paths start to diverge when he begins succumbing to the power of his nostalgia and childhood, and I wasn’t able to follow him. It’s not a bad movie, and it’s actually fairly effective. I just feel like it leans a tad too much on an assumed nostalgia, that I just didn’t contain.

A Beautiful Day in the Neighborhood was written by Micah Fitzerman-Blue and Noah Harpster, directed by Marielle Heller, and released by Sony Pictures Releasing, 2019.

A Beautiful Day in the Neighborhood is a very odd film. I see most people referring to it as “the Mister Rogers movie,” and yet this isn’t a movie about Mister Rogers. It’s essentially a biopic of the journalist who wrote the article, but then weirdly it’s only loosely based on that true story, even to the point where it’s a different name used. So, we mainly have a movie about an emotionally stunted journalist whose life is changed by a chance meeting with Mister Rogers. Which, I guess isn’t that bad an idea. A traditional biopic of Rogers would probably be pretty boring, so I think it’s a wiser idea to tackle a specific period in his life, it’s just still a little weird that it’s not about his life. And, I feel like in a few years people are really only going to remember the Mister Rogers aspects of the film, specifically Tom Hanks’ performance. He really is terrific in the film, utilizing his own powerful status as a beloved father-figure in film, and channeling it all to bring this impossibly decent man to life. You really do understand why everyone around him is in awe to be in his presence, primarily by how Hanks carries himself. I just can’t help but feel like I’m missing something major about this movie. 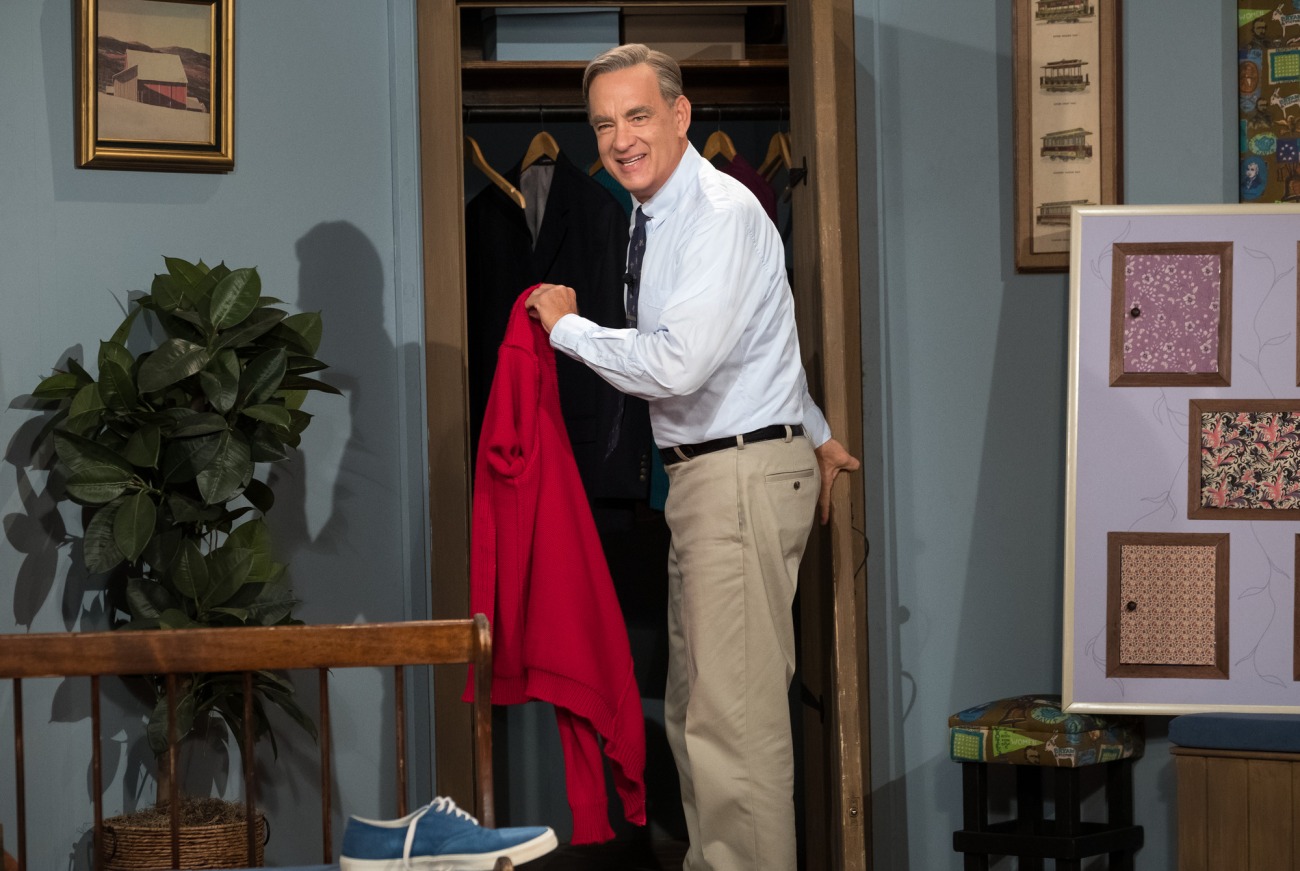