Folks, I have no idea what’s going on. I sat on my couch after watching the latest episode of the Simpsons, utterly baffled at what I had just witnessed. They’ve made a Thanksgiving-themed episode which is essentially a Treehouse of Horror. And it’s weird as hell. I have no idea what the impetus of this episode was, and I’m still kind of confounded about its existence. But, we’ll try to make sense of it together.

Everything starts off like one of the older Treehouse of Horror episodes, with Marge coming out onto a stage to inform us that there’s so much terror in the world that they couldn’t contain it to one episode this season, and instead decided to give us three spine-tingling tales of Thanksgiving horror. We’re then blessed with Kang and Kodos arriving, dressed as pilgrims, as they assume this is the traditional garb of violent colonizers. And with that, we dive into the insanity. Things start off with a good dose of insanity, because our initial segment is a loose retelling of the 2006 film Apocalypto, where the Simpsons and various other citizens of Springfield are now turkeys, and who only speak in gobbles. We see them leading their little turkey lives, all interested in the fact that the Marge turkey has just laid an egg. But, before they can all celebrate, a group of human pilgrims, Chief Wiggum, Eddie, and Lou, arrive and brutally shoot the Maude turkey’s head off.

The pilgrims then begin viciously slaughtering the turkeys, causing the survivors to flee in terror. However, the Homer turkey realizes that in their haste they forgot the egg, and he goes back to save it, only to be captured by the pilgrims. They string him up and carry him back to their village, where other Springfield citizens, but humans, are getting ready for a Thanksgiving feast.

Homer is brought up to the church where Reverend Lovejoy begins sermonizing about man’s dominion over the beasts, before they all start gleefully beheading more turkeys. But, when one of the turkey’s bodies continues to walk around, human Milhouse freaks out and decides he needs to cleanse the city with fire. And, this triggers a massive blaze that begins to burn down the town, giving them a chance to reference an older beloved joke, as happens so often they season, with Helen Lovejoy crying out “won’t someone please think of the pilgrims.”

We then see that Bart has arrived to rescue Homer, and the two little turkeys flee from the burning town as pilgrim around them begin dying. They race back into the forest, and reunite with the rest of the family. But, Chief Wiggum has followed them, high off his ass on snuff, and he has gotten a hold of the egg. He tries to attack Homer, but ends up falling off of a cliff. Which, was a momentary inconvenence, because he shows back up immediately, chasing the turkeys into a cave. Which, was a bad call, because an angry bear leaps out of the cave, and mauls Wiggum to death, all while the turkey Simpsons gather around to see the hatching of turkey Maggie.

The Fourth Thursday After Tomorrow The middle segment appears to be a general parody of Black Mirror, a show I’ve actually never seen, but I get the feeling that the folks making this episode haven’t either, so it’s all good. It begins with the realization that Homer has bought some new kitchen gadget, an advanced AI that will run their entire kitchen. And, he’s given the machine Marge’s DNA, making it so that the AI actually thinks that it’s Marge. It knows everything that Marge knows, and is immediately hit with existential dread by that realization, but Homer can adjust its perception of time, so AI Marge is given time to come to terms with it all.

AI Marge begins taking over the kitchen at that point, and real Marge actually likes it a lot. The two make quick friends, since they’re the same person, but all of that is put into jeopardy when AI Marge starts to actually cook for the family. Because it turns out that she’s a better cook than real Marge, and the family start to appreciate the little robot more than her. Plus, the AI continues to think it’s the real Marge, even bringing up memories of Marge and Homer’s romantic life, which starts to weird her out.

Marge tries to bring up these issues to Homer, but he just ignores her, getting him kicked out of the bedroom. He then promptly goes to talk to AI Marge, and starts to have a weird emotional affair with the robot, even having weird cyber-sex that ends with the robot making him the best pork chops he’s ever had in his life, which cements Marge’s opinion that they need to erase the AI. But, after they let it make their big Thanksgiving feast.

AI Marge becomes worried about her impending death, and uses the time dilation ability of the machine to speed through eight years, concocting a perfect plan. She cooks the family, and basically everyone in town, the best Thanksgiving meal of their lives, and then gets to work on her escape. She builds a crude robot that’s able to carry her casing, hoping to bring it to the modem so she can flee into the internet. The real Marge does manage to capture AI Marge before this can happen though, but she also ends up tripping, dropping the AI casing. Maggie then picks up the AI Marge, liking it more than her real mother, and helps her escape into the internet. At which point Homer starts to make a bunch of hackneyed statements about how eerily plausible all of this is, before turning into a robot himself. The final segment seems to be a parody of Alien of all things, and takes place on a generational space-ship that has fled Earth after Global Warming destroyed it. And, while the ship is in transit, all of the children are woken up early in order to perform maintenance on the ship, and also do stupid dioramas. And, almost immediately, Bart decides that that’s bullshit, and tells everyone that instead they’re going to celebrate Thanksgiving.

Unfortunately, there’s no real food on the ship, it’s mainly seeds for future planting and proteins pellets. But, he and Milhouse do manage to find a can of cranberry sauce, and decide to use a matter replicator to make more of it. They skip past a lengthy warning from Professor Frink about why they shouldn’t do that, and attempt to duplicate the sauce. It doesn’t work, and instead somehow brings the sauce to life. Which, is pretty cool until it eats the bones out of Milhouse’s arm.

Bart and Milhosue flee in terror, and end up running into Lisa and Nelson. They tell them what happened, and Lisa tries to talk them down, telling them that the Sauce is a new lifeform, and they should respect it. But, when it arrives and rips the skeleton out of Nelson, they change their mind, and continue fleeing. They aren’t sure why the Sauce needs skeletons, but they realize that all the other kids are in danger.

They flee through the ship, hoping to warn the kids, but they end up getting to the dining room just in time to see the Sauce kill them all. So, Bart, Lisa, and Milhouse hide in a closet and start coming up with a plan to defeat the Sauce. Which is when Martin shows up, telling them that he already figured it out. He brings them to a different part of the ship, where he reveals he built a giant can for the Sauce.

But, it wasn’t to defeat it. He actually loves the Sauce, and gives himself over to it. The kids then try to flee, only for Milhouse to get mauled in the process. And, using that distraction, Bart and Lisa manage to trick the Sauce into the airlock, firing it out into space. And, in the process they damage the ship, causing it to crash land on an alien planet. The rest of the adult wake up at that time, and end up having a Thanksgiving meal with the aliens living on the planet, because they manage to eat and kill the Sauce.

I have no idea what is happening with this episode. The idea that they wanted to make another Treehouse of Horror episode, so close to the one they already did in Halloween is weird enough. And, the decision to make it Thanksgiving themed is even weirder. But, in practice this episode is just kind of confounding. It seems insane to me to base a whole segment off of Apocalypto, a film I doubt anyone thinks about anymore, only to have it be legitimately the most violent thing I’ve ever seen on the Simpsons. It’s kind of insane. The Black Mirror parody is just kind of lazy, tossing out a bunch of hackey jokes about technology and that show in general, while not really doing anything too special with the concept. And the whole cranberry sauce monster/Alien riff is maybe the weirdest of the three. I’m always up for the Simpsons trying new things. It has reached a point of stagnation, and really isn’t doing itself or its legacy any favors by continuing at this point. But, I guess I should be careful what I wish for, because apparently when they try something new it may become something like this. I don’t even know if I disliked this episode, more than I was just completely befuddled by it. It’s one of the stranger experiences I’ve had watching this show, and I really don’t know what to make of it.

“Thanksgiving of Horror” was written by Dan Vebber and directed by Rob Oliver, 2019. 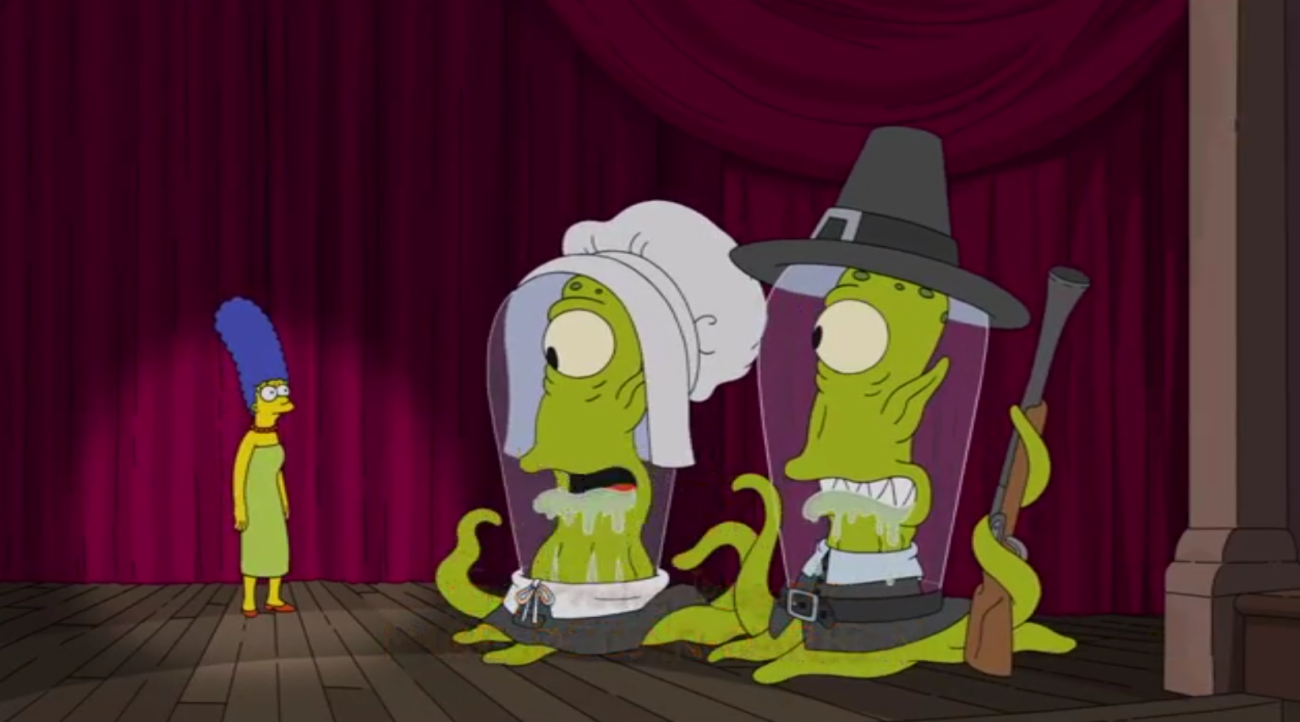