Hello everyone, and welcome back for yet another installment of Bat Signal, my never-ending quest to read every single issue of Detective Comics ever published, in random order and with basically no context. Which, really is going to come into play with today’s issue. Every now and then I end up pulling an issue that is part of a larger story, meaning that I’m not going to get the full story any time soon, because the odds that I’ll randomly pull the other issues from that story any time soon are pretty slim. But, even more rarely I get issues like today, which spill over from Batman, which I don’t even read. I mean, this story is so connected with the other one that the title doesn’t even fully make sense, because the first issue is the first half of a dumb pun, “Half a Hero…” But, that doesn’t really take too much from this story, because we end up getting the whole picture. Plus, a whole lot of bureaucratic Gotham City nonsense!

The issue begins by throwing us right into the chaos of what’s going on, because Bruce Wayne and Batman have been missing for a week now. We hop all around Gotham City, seeing how various citizens are reacting to that news. Robin and Alfred are obviously really worried, being the only people who can confirm that both men are truly missing, and having no idea where he is. Which is obviously throwing Robin into a bit of a panicky rage. And, Alfred is also having to deal with Vicky Vale, who has become convinced that Bruce is Batman, and has been hectoring Alfred to tell her the truth. And it’s not just the people in Bruce’s circle that are feeling the effects. Batman’s disappearance has become big news around town, including the new Commissioner of Police, Peter Pauling, who has decreed the whole thing as a media fabrication. We also see Mayor Hamilton Hill and crime boss Rupert Thorne discussing how this is a good thing for them, unless Batman’s gone to hiding in order to reveal their criminal enterprises. But, that’s not even the biggest thing on Thorne’s plate, since he’s also seeing the ghost of Hugo Strange. Which I’ve weirdly seen come up in several issues from this era. 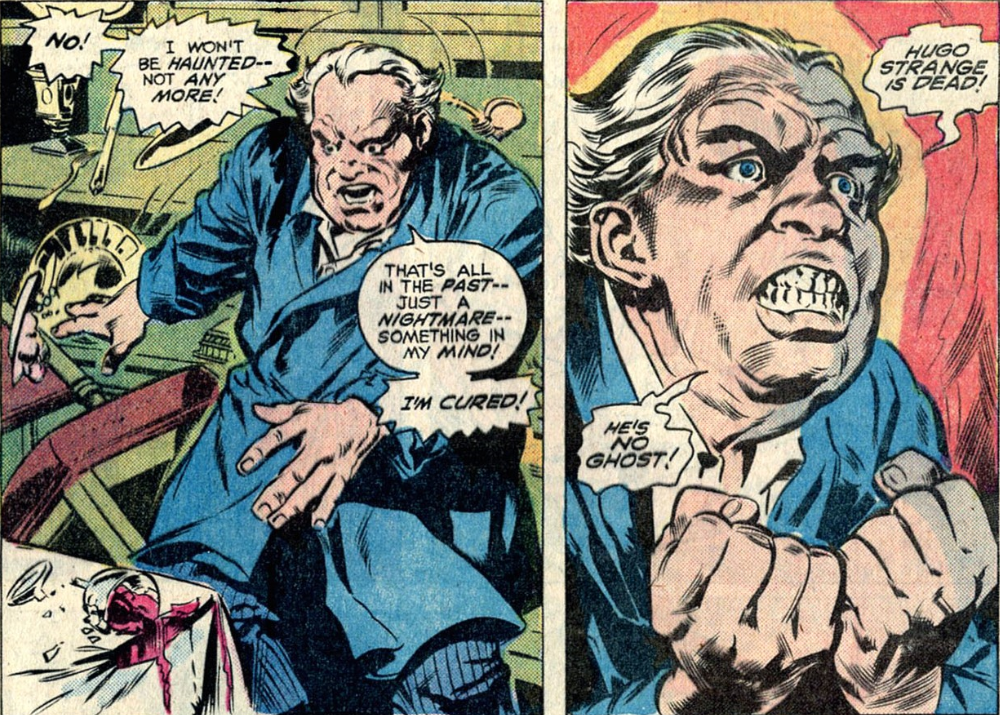 But, it turns out that there’s one person in Gotham who definitely knows what’s going on with Batman. And that man is Harvey Dent, better known as Two-Face. We see that he’s sitting around in his hideout, complaining about what an idiot he used to be back when he believed in truth and justice, and how better his life is as a crazy supervillain. And, after his strange little monologue, he begins laughing at the people of Gotham, worrying about Batman’s fate, which he just so happens to hold in his hands. As he demonstrates to his assorted flunkies by taking out his infamous coin, and flipping it. And, just as has happened the previous seven nights, it has come up on the ‘good’ side, meaning he’s not going to kill Batman for another day. Because he’s apparently taken Batman captive, and has been keeping him in a glass cell, taunting him with impending death whenever the probability gods will it.

Batman and Two-Face yell at each other for a while, until Two-Face decides it’s time for him and his men to go take care of their latest crime.Which also requires the flip of his coin, but in an interesting twist this decides which of his gangs is going to take point, a group of sophisticated gangsters, or a pack of wild killers. And, the killers end up winning, meaning they get to come with Two-Face as he pulls off his latest crime, attacking a popular record label called Duo Records. And, while they leave t take care of their crimes, Batman is left alone with Two-Face’s girlfriend, meaning the Dark Knight can get to work trying to free himself with minimal observation. And, while he’s taking care of that, Two-Face and his men are storming the record company.

Two-Face and his men storm into the Duo Records building, and gain access to the central air vents, where they begin pumping in a “binary gas,” which manages to knock everyone in the building out. Because, for some reason this building is full of people at 2 A.M. And, with all of those people knocked unconscious, they begin ransacking the building, specifically taking their gold and platinum records to melt down and sell. Unfortunately, the security guard they shocked earlier is able to press a security alarm before passing out, sending out a signal that ends up hitting Robin as he cruises around in the Batmobile. Robin then races to Duo Records, and attacks Two-Face and his men. Two-Face attempts to throw the young crime-fighter off with some taunts about Batman, but this just ends up causing Robin to hulk out and beat the shit out of Two-Faces men, causing Two-Face to flee in terror.

Two-Face races back to his hide-out, furious that his little plot has failed. And, as he gets to the building he finds his girlfriend waiting for him, telling him that Batman is up to something. And, having had a terrible night, Two-Face flips his coin once more, and gets the scarred side, deciding it’s time to kill Batman. He storms into the room with Batman’s cell, and finds the Caped Crusader messing with a pipe in his cell. And, as Two-Face approaches the pipe bursts, and Batman is sprayed with hot steam. At which point he turns around and reveals a severely burned face, much like Two-Face’s. This causes Two-Face to lose it, having some PTSD, at which point he frees Batman, feeling his pain. Which gives Batman the chance to knock Two-Face out. Robin then shows up, and Batman reveals that the burned face was just a prop made from a melted food tray he’d received that night, figuring that he could play on Two-Face’s own fears and memories.

This is a pretty fun issue. I’m always a sucker for Two-Face stories, and this one certainly didn’t disappoint. I was a little worried at first, realizing that I was reading a story that I couldn’t possibly find the first half of due to the stupid confines of this project, but it ended up working a lot better than some of the other similar stories I’ve tackled. There was a lot of the issue devoted to seeing how various people around Gotham feel about Batman’s disappearance, but none of that distracts from a pretty fun little issue. I kind of liked seeing a story where Batman is largely out of commission for most of the story, just stuck in a cell trying to think his way out. And, that ended up being pretty fun, preying on Two-Face’s own issues to win, which is a little twisted, but it works. I also really enjoy the idea that Two-Face is running two very different gangs, and his coin chooses what types of crimes he pulls based on the coin. That’s something I don’t think I’ve ever seen from him, and would love to see make a come-back.

“…Is Better Than None!” was written by Gerry Conway, penciled by Don Newton, inked by Frank Chiaramonte, colored by Adrienne Roy, lettered by Ben Oda, and edited by Dick Giordano and Dave Manak, 1982.