Discovering the Past with The Lady from the Black Lagoon 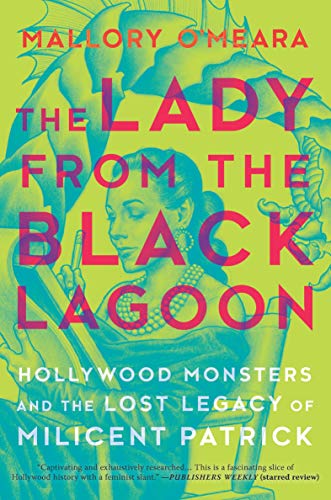 As Halloween approaches, I’ve decided to do something a little different. Normally I like to spend October talking about horror novels, or at least spooky novels, to get into the mood. And, I’ve largely whiffed on that promise this year, ending up mainly just talking about a Stephen King novel that didn’t end up being a horror story. So, keeping up with this trend, I decided to branch out and talk about a book that isn’t necessarily a horror story, but certainly horror related. I don’t talk about a lot of non-fiction here on the site, but when I heard about this book I knew that I’d need to check it out, and have basically been saving it the entire year to discuss in October. Because, when I heard that a book was released telling the untold story of the woman who actually designed the Creature from the Black Lagoon, one of my favorite of the Universal Monsters, I knew it was going to be something special. And, it was. This is a really fascinating book, one I highly recommend anyone interested in horror, movie-making, or just awesome stories of talented women, to pick up, because it’s a hell of a journey.

The book is written by a horror fan and movie producer named Mallory O’Meara, and chronicles her obsession with the history of a woman named Milicent Patrick, who despite never getting properly credited, was the person who designed the distinctive Creature from the Black Lagoon. The book switches between O’Meary explaining her trials and tribulations looking for this person that history had largely forgotten, and the story she uncovered. O’Meara had to deal with quite a few historians and buffs who had largely dismissed her idea, seeing Milicent Patrick as a minor figure, and not one worth studying. But, she perseveres, and ends up discovering the life of a fascinating person, who led a very strange life. Milicent Patrick was born the middle daughter of an ambitious architect who traveled around the world with his family looking for work, before eventually ended up working for Julia Morgan, a powerful architect who was tasked with designing the massive estate of William Randolph Hearst. Milicent grew up around Heart Castle as it was being built, seeing powerful and glamorous people, which helped inspire her to follow her dream and get an arts education from the Chouinard Art Institute, a respected institution founded by a woman named Nelbert Chouinard, and which ended up getting Milicent her first crazy job. Because the Chouinard Institute was hired by a fledgling animation company to help color and ink their animation. That company was Disney.

Milicent began working for Walt Disney’s company, helping paint and animate a few of their earliest films, including being instrumental in the Chernabog scene of Fantasia. She worked at Disney for a few years, meeting her first husband, before leaving perhaps to scandalous reasons. She then bopped around Hollywood for years, acting and modeling, while keeping her love for art alive. And, through that, she eventually got a job designing makeup for the studios, which at the time was dominated by a family known as the Westmores. Bud Westmore ran the makeup department at Universal, while largely doing little other than administration, and Milicent was brought on board to help design their new Monster, the Creature. The project wasn’t really anticipated to be a huge success, but Milicent designed an instantly iconic monster, and when the media learned that such a scary monster was designed by a beautiful woman, Universal decides to send her all around the country promoting the film. Which, drew the ire of Bud Westmore, who ended up demanding that Milicent be fired from Universal, and her contributions essentially erased from history so that he could get all the attention. Milicent then largely left Hollywood, living out the rest of her life as a socialite, while never forgetting her deep love of art and creation. And now, thanks for the work and ingenuity of Mallory O’Meara, her story has finally been told.

I haven’t really read a lot of biographies since starting this website, largely because I find it so much more fun to discuss narratives rather than just quickly summarizing I life that I read a summary of, but historically I’ve been a big fan of biographies. They’re often incredibly engrossing, giving you an in depth look at an interesting person, usually written by someone with a lot of passion, because otherwise they wouldn’t have devoted so much of their life examining the life of someone else. But, there was something refreshing about the way that this book is written, melding the life of the subject with the life of the author, giving you an appreciation for the struggles that Mallory O’Meara went through in order to uncover a story that had largely been forgotten. She learned of Milicent when she was young, found that no one really seemed to care about her, and decided to devote a chunk of her life to investigating the raising up this mysterious figure, attempting to find a great female role model for aspiring horror fans. And, along the way, she ended up discovering an utterly fascinating person, whose career and life was so much more than being defined by the Creature, along the way finding out about several other completely fascinating women that I would love to read biographies of, and who I’ve never even heard of. Which, ends up being the central idea of the book, that history is littered with truly fascinating women who history has largely forgotten, thanks to the patriarchy. Women whose inventions, stories, and lives were put into the shadows by egotistical men, who took credit for their work while helping write the history that forgets them. It’s a tragic story, but one that could change. Because Mallory O’Meara has accomplished something wonderful here, and should be an inspiration in her own right for more people to chase down their own personal heroes, finding the countless forgotten stories of the past to be appreciated by the people of the present.

The Lady from the Black Lagoon was written by Mallory O’Meara, 2019.