Hello everyone, and welcome back to yet another installment of  Bat Signal, my never-ending quest to read every single issue of Detective Comics, in rando orer, and with essentially no context. Now, I always hope that as we approach Halloween that the random number generator gods will smile upon me and give me a somewhat spooky issue to talk about. But, sadly, that almost never happens, and instead we get to talk about an issue that feels straight out of a 1950’s B-Movie. We have a ridiculous set-up fueled by a gross misunderstanding of atomic power and radiation, where Batman gets a temporary new look. Pretty standard stuff here, folks.

The issue begins with a random Gotham City beat cop wandering the streets, looking for crime to tell Batman about, when he sees something pretty shocking, even by Gotham City standards. Because, right before his eyes, an entire bank just vanishes in the blink of an eye. And, this qualifies as something to call Batman about. Batman and Robin show up to see what’s going on, and as they’re standing there puzzled the bank suddenly re-appears, along with everyone who was inside of it when it vanished. But, the people inside aren’t of much help. They say that some armed men came inside the bank, and suddenly they blacked out. Then, they all came to when the bank reappeared. They have no idea what has happened. And, that’s for good reason, because the actual answer is pretty damned unbelievable. Because it turns out that a disgraced scientist named Hal Durgin has created something he calls an atomic camera, which can do all sorts of insane things.

So, yeah, Durgin has essentially created a magic camera that has Pokeball technology. And he’s using it to pull all sorts of heists, such as shrinking and stealing an entire bank, and currently stealing a massive crate of imported furs. Unfortunately, Batman and Robin just happened to be skulking around that shipyard, and quickly start to fight them. And, in that tussle, Batman ends up tripping on a pipe, sprawling out to give Durgin the perfect shot with his camera. But, before the device can fully focus on him, Robin throws a gun at Durgin’s head, causing him to jerk and mess up the process. But, it did have a strange effect on Batman, causing him to become a photo-negative of himself. Which, obviously keeps Batman and Robin occupied enough that Durgin and his men are able to slip away.

Batman and Robin are pretty baffled by this whole photo-negative thing, and after filling Commissioner Gordon in on their failure, they head back to the Batcave. But, once there, Batman starts to feel really terrible, and excuses himself for the night. And, the next morning he and sitting around on a dark and dreary Gotham Day, when Batman figures out a clue that Durgin accidentally left behind, which makes him think that they are planning on hitting a museum next. So, the Dynamic Duo race off to fight Durgin, only to find that he and his men have done something insane. They have shrunk and then released an elephant into the park outside the museum that’s covered in metal dinosaur replicas, distracting everyone. Batman and Robin then focus on defeating the elephant, while Durgin is able to focus on escape. Which, is made much easier when the sun finally peek out of the clouds, causing Batman to instantly weaken again. And, as Durgin escapes yet again, Batman decides to tell Robin about a terrible realization he’s just had. Much like a real photo negative, bright lights are causing Batman to degrade. So, they call Commissioner Gordon, who brings along some reporters for some reason, and Batman explains the whole predicament. Batman and Robin then get picked up by an ambulance so that Gotham’s finest doctors can run experiments on Batman to try and save him. And, nothing works. They think that Batman will just continue to weaken until he fades into nothing. So, Batman and Robin sadly walk back to the Batcave, avoiding light at all costs, before slumping down, defeated.

Meanwhile, Durgin and his men are planning their next heist when they see a news broadcast about something that piques their interest. Turns out that a jewel-encrusted replica of the Taj Mahal is going to be displayed in Gotham, and they decide they need to steal it. So, that night they arrive where the large replica is being held, and find Batman waiting for them. But, Durgin just uses the camera once more, absorbing Batman and the Taj Mahal, so that they can bring it back to their base. However, when they get there and they release both the Taj Mahal and Batman, they find that Batman is still a negative, which doesn’t make sense to Durgin. He starts panicking, especially when it appears that Batman now has superhuman strength. However, as they’re panicking the real Batman and Robin come out from the Taj Mahal, and begin fighting Durgin and his goons. So, what’s going on? Well, it’s insane. Batman has apparently made a robot version of his photo-negative self, placed it inside the Taj Mahal, provoked Durgin to shrink it and him so that he can revert to his natural state, and then sprung out to fight them. Why the robot? Why not! A lot of Batman comics from this stage of the Silver Age just kind of feel like rejected premises for the sort of bad B-Movie sci-fi flicks that Roger Corman and his ilk would churn out. Which, isn’t necessarily a bad thing. I certainly grew a strong affection for that whole aesthetic after a life-time of loving Mystery Science Theater 3000, so when I come across a story like this, where Batman gets wrapped up in the type of story that I could see the inhabitants of the Satellite of Love riffing on, it’s pretty fun. This era of Batman, when they were desperately trying to shoehorn him into the current popular genre, isn’t exactly my favorite, but it can lead to some goofy and fun stories. Such as this. It’s not a story that I’m probably going to remember well, but seeing Batman get turned into a photo-negative of himself, all thanks to an insane “atomic camera,” it pretty fun. Batman’s plan at the end doesn’t really make a whole lot of sense, and the robot seems incredibly superfluous, but hey, if you have a robot replica of yourself I bet you find reasons to bring it out all the time.

“The Negative Batman” was written by someone (probably Bill Finger), penciled by Sheldon Moldoff, inked by Charles Paris, and edited by Murray Boltinoff and George Kashdan, 1960. 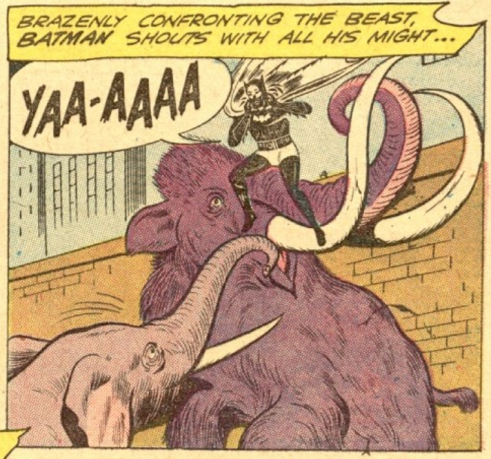