Hello everyone, and welcome back for yet another installment of Bat Signal, my never-ending quest to read every single issue of Detective Comics ever published, in random order, and with essentially no context. And, once again, we’re taking a trip to the early Silver Age this week, a time when the comic industry really didn’t know if it was going to survive, and thus tried whatever they could do to draw readers in. More often than not that lead to weird stories that leaned into a sci-fi aesthetic, passing up on the more familiar villains and classic set-ups. But, weirdly enough, we get a very different issue today, one that not only features one of Batman’s all-time villains, Catwoman, but one that leans into an almost pulpy adventure story aesthetic. And, it’s kind of a blast.

The story begins with the pilot of a plane carrying a cargo of diamonds making a quick landing in Gotham City. Which, seems like something someone carrying diamonds should never do, but whatever. And this is made even more apparent when he’s immediately robbed by Catwoman and her trained black panther. The pilot is terrified of the panther, justifiably, and he immediately hands over the diamonds to the Princess of Plunder. She then stores them and her cat in a giant cat-shaped jet, and flies off to her new hide-out. Which, obviously is going to catch the attention of Batman and Robin. They’re informed of the heist, and after a quick investigation of the scene they’re able to identify that Catwoman’s plane had some very rare clay in its tire-tracks, leading them to believe that she’s hiding out on an island. So, they hop into the Batplane, and fly off to the island they assume she’s hiding in. Which, turns out to be exactly correct! Unfortunately, Catwoman just so happens to be flying around the island as well, and her cat-shaped plane is able to destroy the Batplane. Catwoman’s plane is able to rip up the fuselage of the Batplane, causing them to crash-land on the island. But, before they hit the water, Batman’s able to identify a small mine on the island. So, when they wash ashore they immediately start trekking through the jungle, looking for the miners. And, sure enough, they come across a group of men working in a small diamond mine. They tell the miners that they’re here looking for Catwoman, and it just so happens that they’ve been dealing with her for quite a while. They tell the Dynamic Duo that Catwoman has been trying to take over their mine, and ask them for help. So, Batman and Robin start setting up a series of ridiculous snare traps to deal with Catwoman, and while working on them they suddenly find themselves captured themselves. Because these miners are actually in league with Catwoman, who comes strutting out of the jungle once the two crime-fighters are hogtied and waiting for her.

She then orders Batman and Robin to be stripped of their costumes and gadgets, forced to wear “jungle clothing” before being released into the jungle so that she and her collection of jungle cats can hunt them. And, taking advantage, Batman and Robin race off into the jungle, hiding in a nearby river and breathing through reeds so that Catwoman and her cats walk right past. And, with that taken care of, Batman and Robin begin stalking after Catwoman, hoping to figure out what she’s up to. Which ends up bringing them to an ancient temple on the island, seemingly devoted to a cat-god. And, inside she finds Catwoman lounging around with her cats, which Batman realizes are actually trained circus animals that she appears to have stolen. So, leaning into that realization, Batman gets a hold of a whip and begin trying to tame the cats, luring them back to their cages while capturing Catwoman.

Unfortunately, it turns out that the miners have another trick up their sleeves. Because they also have a caged gorilla whose size seems to radically shift between panels. They free the massive gorilla, and it attacks the Dynamic Duo, managing to pick Robin up and throw him like a rag-doll. Batman attempts to save his ward, but in the process leaves himself wide open for the miners to take him hostage. And, in order to take care of Batman, Catwoman and the miners decide they’re going to ritualistically drown him. They dress Batman back up in his costume, tie him up, and toss him into a river, assuming that he will flow down to a waterfall and plummet to his death.

But, while Batman is struggling to come up with a way to survive this drowning, Robin is waking up back with the animals. And, thinking fast, he starts bothering the animals with smoke, hoping to get them to stampede into the miner’s camp. Meanwhile, Batman has figured out how to lasso himself onto a rock, swinging out of the waterfall and to safety so that he can sneak back up to Catwoman, who legitimately seems sad that she has defeated Batman. So, the Dark Knight ties her up in the middle of he jungle, and returns to the miners camp, where he learns that Catwoman has been stealing diamonds from around the world where the fake miners then recut them and sell them as supposedly freshly mined gems. The miners then attempt to attack Batman once more, but are thwarted when Robin and his stampede arrive, distracting them long enough for Batman to defeat them. At which point they witness Catwoman fleeing on a tiger, deciding not to give chase for some reason.

This issue is pretty dumb, but I ended up enjoying myself quite a bit. I love that comics from this era were just kind of throwing everything at the wall to see what stuck, resulting in some incredibly strange Batman comics where he was chasing whatever genres would get people to pick up issues. And, apparently crazy jungle adventure was one genre that they hadn’t tried, and it actually ends up working much better than you’d think it would. I mean, it’s always weird when Batman and Robin are facing aliens, but for whatever reason seeing the two run around in loin-cloths fighting evil diamond miners and giant gorillas just kind of worked for me. It honestly may just be the novelty of the situation, actually becoming something that I hadn’t seen before from a Batman story, which is becoming an increasingly irregular phenomena.

“The Jungle Cat Queen!” was written by Edmond Hamilton, penciled by Dick Sprang, inked by Charles Paris, and edited by Whitney Ellsworth, 1954. 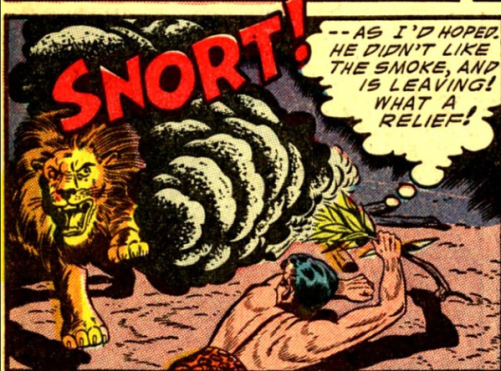