Hello everyone, and welcome back for yet another installment of Bat Signal, my never-ending quest to read every issue of Detective Comics, in random order, and with essentially no context. And, we have a strange thing to talk about this time, folks. It’s definitely the most recent issue that I’ve ever covered here on Bat Signal, since it literally came out this year. And, it’s a really weird issue. I’ll be honest, I read this issue when it came out mere months ago, and I felt completely lost rereading it, having completely forgotten what in the world was happening with this complicated plot that ran in the book as it rapidly approached issue 1,000. It’s not a bad story, and it features on of my all-time favorite weird DC characters, Etrigan the Demon. So, let’s piece through this thing.

This issue is part of an ongoing story that took revolved around Batman fighting a mysterious demonic entity that became obsessed with him. It seemed to know everything there was to know about Batman, and was targeting the various people that helped train Bruce Wayne when he first began being Batman. This has taken Bruce on a tour of his own history, fighting this creature as it continues to evolve and attack people, all while he looks for the source of it’s evil. And, this bring him initially to Hugo Strange, who just so happens to have recently been creating impossible monsters to bedevil Batman, so it just kind of makes sense. But, when Batman reached Strange’s latest hideout the villain seems genuinely confused why Batman’s there, and ends up being quite impressed when he hears about the monsters that have been attacking Batman’s friends and family, admiring the craft-work that went into them. So, that ends up being a dead-end. However, at that moment Bruce gets a call from Alfred, saying that they were recently called by Jason Blood, asking for help. So, Batman knocks Hugo out, and heads off to meet with Jason Blood. 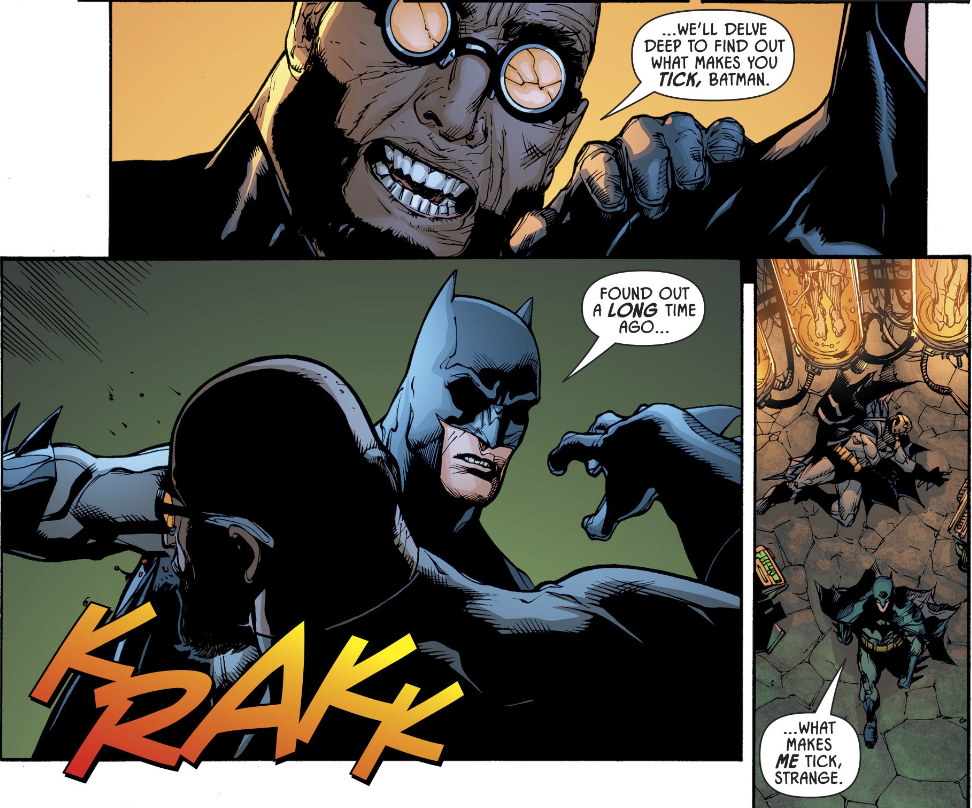 Batman leaves Stange’s hideout, and requests Alfred bring him a very specialized suit. It’s called the Hellbat, and Batman feels like he’s going to need it to deal with Jason Blood and whatever this mysterious foe is going to be doing to him. Because Jason Blood is no normal man. He’s been alive for centuries, as a result of having been bonded to a demon known as Etrigan. Bruce apparently went to Blood to learn about fear, figuring that a guy who literally transforms into a demon from Hell would know a thing or two about that. But, because of those hellish possibilities, Batman needs to be more than a man in case the strange monster now has magical abilities. Hence the Hellbat, a massive high-tech suit of amour that apparently has abilities borrowed from every member of the Justice League, which was forged in the sun by Superman, and that literally is powered by Bruce’s soul, meaning that he could likely die if he uses it too much. But, it’s worth it, so he gets into the suit and flies off to Jason Blood’s curio shop.

And, just as he was afraid of, as soon as Batman reaches the shop he finds that the creature has beaten him there, and currently has Etrigan trapped in some sort of magical cage. The creature is draining Etrigan’s spirit to power itself, and it doesn’t take kindly to Batman showing up and ruining its meal. Luckily, the Hellbat is absolutely stocked with weaponry specifically designed to fight mystical enemies. Batman starts unleashing upon the creature, and is briefly even able to free Etrigan from his magical confines, but the damn thing comes back too quickly. The creature seems specifically designed to harass Batman, and mess with him psychologically, so it starts mocking him about how much he’s fighting to save a literal demon, to which Batman responds by beating the hell out of the creature.

Unfortunately, the creature doesn’t take this assault very well, and starts turning out all the stops. It begins attacking Batman with everything it has, both physically and with quite a bit of mystical green fire, sending Batman and itself careening through the building, until they end up falling into the streets of Gotham. And, this barrage of attacks is able to breach the Hellbat, causing Batman to resort to the ultimate weapon in the suit, something that has a 90% chance of killing him in the process. But, Batman decides that it’s worth it, and powers up the Devestator, an attack powered by the entire Justice League. And, once utilizing that power he’s able to punch the creature so hard that it loses control of it’s magical confines, freeing Etrigan so that he can roast the thing with hellfire, killing it.

Etrigan is quite pleased to have been freed and starts thanking Batman, but Bruce doesn’t really have any affection for the Demon, and requests Blood be returned. So, Etrigan transforms back to Batman’s former mentor, who tells Bruce that he had been studying the creature, and it appears to literally be a manifestation of all the fear that he’s caused over the years, come back to haunt him. Batman realizes that that doesn’t sound good, but he also notices that the creature left behind the very first grappling gun he ever made, which gives him a clue as to the creature’s next target. So, he leaves Jason Blood and heads to S.T.A.R. Labs, where Elias Stone is hard at work. It turns out Bruce got scientific advice from Stone back in the day to make his gadgets, and he fears that Stone is the next victim. The two chat for a while about Stone’s son, Cyborg, until Bruce starts to notice something off about him. Which reveals that this isn’t actually Silas Stone, but some sort of hologram created by the creature. It then reveals its next form, which is a child in a Batman costume? The end! So, yeah, I’m kind of conflicted about this story. On one hand, rereading it was kind of fun. It’s a really weird little story, but it’s also kind of a hoot. It’s full of deep-cut DC nonsense, has Batman fighting a monster which wearing magical armor, and features Etrigan the Demon, a rhyming monster who I love. But, on the other hand, I read this story in April, and literally remembered nothing of it. It’s fine at the time, but it just kind of slips right out of my brain. Who knows, maybe it’ll stick this time, but I’m not really holding my breath. I can’t even remember what this demon thing ended up being revealed to be, or what this strange child thing at the end is. This entire storyline was pretty fun, Batman dealing with some internal and external demons while hanging out with a bunch of weird DC characters who have been retroactively made parts of his origin, but it just didn’t leave that much of an impact on me. But, hey, when else are we going to get to talk about Etrigan?

“Mythology: Hell and Back” was written by Peter Tomasi, penciled by Doug Mahnke, inked by Jaime Mendoza and Mark Irwin, colored by David Baron, lettered by Rob Leigh, and edited by Chris Conroy, Jaime S Rich, and Dave Wielgosz, 2019.