Hi there everyone, and welcome back to yet another installment of Bat Signal, my never-ending quest to read every single issue of Detective Comics, in random order, and with essentially no context. And, we’re kind of dealing with that last aspect again this week. Last week we talked about a story later on in a long-running story, which kind of left me lost both in terms of what happened before the issue we read and the story after. But, we did okay. This week though, we’re dealing with a completely different problem. We’re dealing with the first part of an ongoing narrative, meaning we get a lot of set-up and no payoff! Woo! But, we also get an introduction to a villain, something we haven’t had in a long time. I mean, it’s Anarky, but it’s still something.

The issue begins with Batman lurking in the shadows outside of a bustling heavy metal club creatively called “The Heavy Metal Club,” where a bunch of disaffected Gotham teenagers are waiting to mosh, and where a handful of drug dealers are attempting to make some sales, convincing all the waiting kids to buy their speed and crank. Which, obviously isn’t going to fly for Batman. He comes swooping down from the shadows, and he begins beating the hell out of the drug dealers. And, after dealing with that, he moves onto another nearby club, “the Heavy Heavy Club,” and gets to work. Because he’s apparently learned that the lead singer of the band performing that night, a guy named Johnny Vomit, is a big deal drug dealer, and he’s decided to take the guy down.

So, Batman gets into the vents above the venue, and begins shuffling around keeping an eye on them. And, after the show finally ends, with Batman griping the entire time like a grumpy old man, he follows them into the next room where he can peep on Johnny Vomit. And, soon enough, some drug dealers march into the green-room and ask for the drugs that Johnny has apparently been smuggling in his guitar case. Which is when Batman comes crashing through the roof, ready to fight all the criminals. He makes pretty short work of the drug dealers, who get the hell beaten out of them, while Johnny Vomit takes the opportunity of the distraction to flee from the building.

Unfortunately, this doesn’t lead to freedom. Because there’s another strangely attired person waiting for him in the alley. It’s Anarky! And Johnny Vomit is really put off by the sudden appearance of a looming figure in red robes, a golden mask, and a big red hat. Johnny is very alarmed, and when Anarky realizes that Johnny is holding a bag of drugs, he suddenly attacks him with an electrified cane, shocking Johnny and dropping him to the ground, unconscious. Anarky then leaves a message behind for the police, who are pretty concerned when they find an almost dead Johnny Vomit. And, weirdly, they also find a page from the newspaper, specifically a letter to the editor specifically complaining about the heavy metal club that Johnny was just killed in front of. Which, obviously raises a red flag for Batman when he begins investigating Johnny’s near-murder. 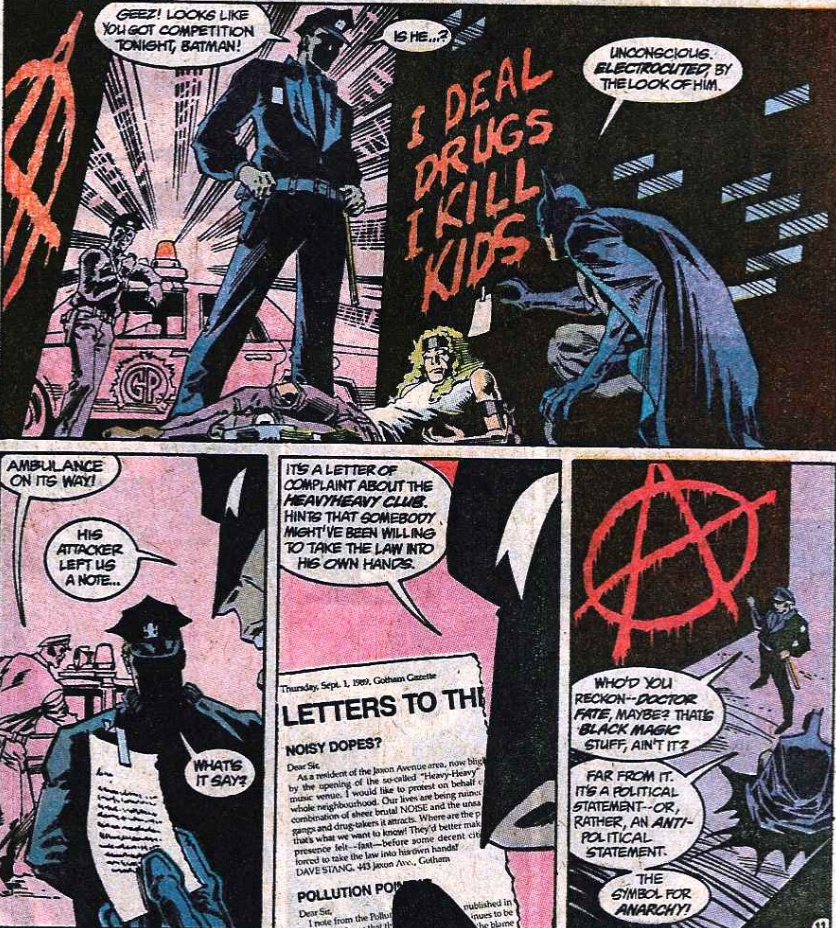 And, it turns out that Anarky has a busy night a head of him, because after almost killing Johnny Vomit he immediately heads towards a local chemical factory that has been dumping waste in the rivers. And it’s all because someone sent a letter to the editor complaining about it. Because that’s kind of Anarky’s whole schtick. He believes that the wisdom of the masses is the most important thing in the world, and thus if the people point out one of society’s woes, it’s up to him to stop them. So, following along with that he breaks into the chemical factory, knocks a security guard out and starts to hold the CEO hostage, all because someone wrote a letter complaining about the chemical waste.

Meanwhile, Batman has decided that it’s worth a shot checking in on the person who sent the letter to the editor, just in case the person was dumb enough to also almost kill a drug dealer. But, it turns out that the person who was complaining about the heavy metal club was just a little old lady, who certainly wasn’t running around killing people and painting the anarchy symbol on walls. So, Batman heads home for the night, full of questions, at the same time that we see a suburban Gotham family settling in for some breakfast. The dad seems disheveled like he’d been out all night, and the son has returned from delivering papers, and they’re just in time to see a news report that’s basically just footage that Anarky shot where he’s brutally kills the CEO of the chemical plant by drowning him in toxic sludge. Proving that this Anarky guy is the real deal, and a major problem that Batman will have to deal with. 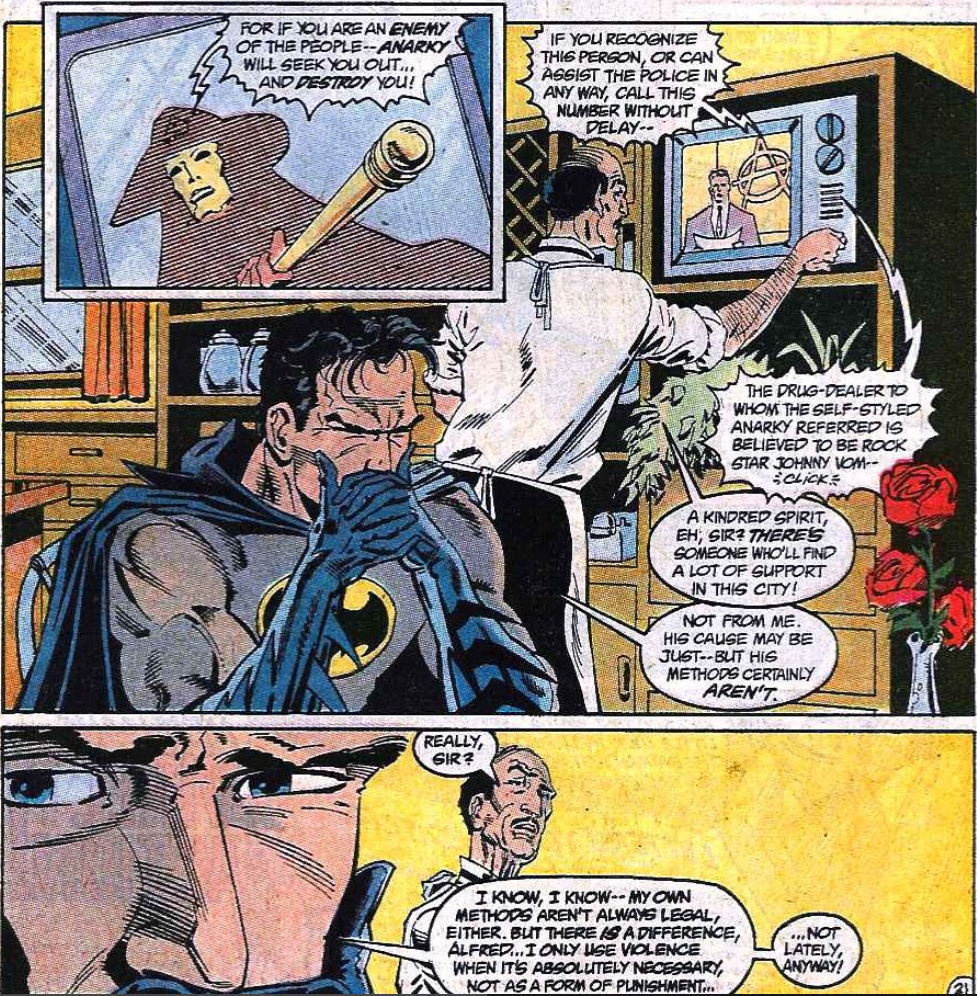 So yeah, this really isn’t much of a story. We’re introduced to a new character, we have no idea what really makes him tick other than an interest in crazy people complaining in the newspaper, and the story just kind of ends without Batman and the villain even running into each other. This is just the first part in a few-issue story, so obviously things will get going in later issues, which we’ll eventually reach someday, I suppose. Plus, it doesn’t help that we’re talking about Anarky, a character that I really struggle to muster much opinion about. Although, I do think it’s funny that in his first appearance I guess we’re supposed to be tricked into thinking that his secret identity is a lazy dad, instead of the truly insane reality of the character, which is that he’s the dumb kid who delivered newspapers, because who else but a moody teenager would dress up like V and kill people because of some basic philosophy he read in a textbook? Because it’s just a very bad way to lead you life.