Hello everyone, and welcome back for yet another installment of Bat Signal, my never-ending quest to read every single issue of Detective Comics, in random order, and with basically no context. And, as you can tell, we’re talking about a very old issue today. In fact, it’s the earliest issue of Detective Comics that we’ve ever talked about here on the site. In case you weren’t aware, Batman only debuted in Detective Comics #27, which means that we’ll be discussing the fourth issue he was featured in. Which means things are very strange. This is a Batman pre-Robin, pre-Batcave, and pre-a whole lot of other things you usually associate with Batman. Hell, he wasn’t even a big enough star yet to guarantee the cover of the comic! So buckle up folks, because this is a bumpy ride.

The story begins with a reminder that the last story ended with Batman grimly looking at a burning house which in theory contained the body of his latest foe, a man known as Doctor Death. Batman assumed the man burned to death, but a week later while reading the newspaper Bruce Wayne finds an article about a local man who died of a strange disease that turned him purple. And, immediately, Bruce decides that this could only be the work of Doctor Death, and decides that the man must have faked his death and is continuing his reign of terror. So, Bruce decides to begin investigating, and figures that the first course of action should be to impersonate a reporter and go interview the widow of the man who died. And, luckily, she has just the information that Bruce wanted to hear. 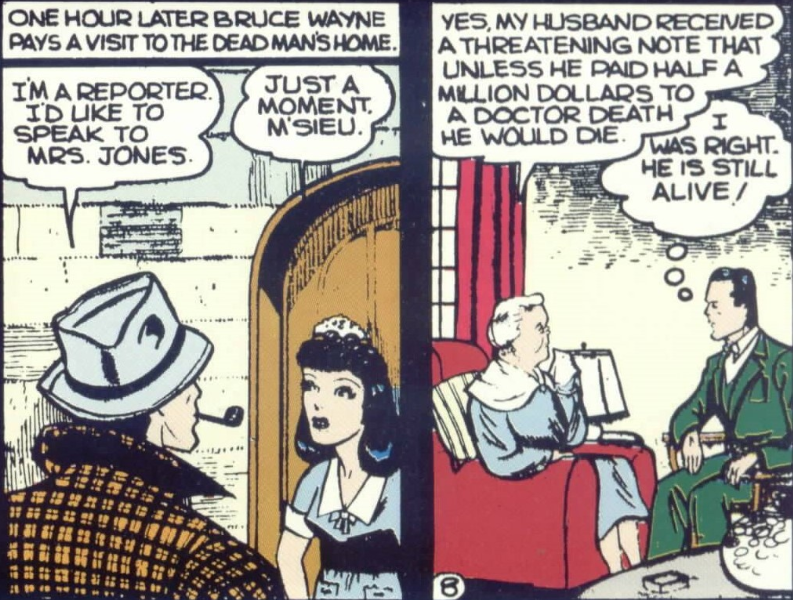 Oh, well, case closed I guess. Check one off for the World’s Greatest Detective. So, Bruce’s hunch is confirmed, and what more the woman tells him that she has no money to pay Doctor Death, only a large collection of diamonds. But, he tells her not to pay off the villain, assuring her that things will be taken care of. So, that night Bruce returns home to Wayne Manor, and puts on his Bat Suit, which is just held in a trunk in his living room, and heads out to fight crime. He travels back to Mrs. Jones’ house, and essentially breaks in, looking for the woman’s collection of diamonds so that he can lay a trap for Doctor Death.

Which, doesn’t take long. Because Doctor Death is alive and well, just wrapped up in quite a bit of bandages, and has ordered a henchman named Mikhail to go steal Mrs. Jones’ diamonds. So, Mikhail reaches the house, only to find the safe with the diamonds already cracked by Batman, and just starts loading up the ill-gotten gains. Unfortuantely, right at that moment Mrs. Jones starts to hear a ruckus, and comes to investigate. Mikhail then responds by taking out a gun, ready to shoot the old woman, which means Batman has to make his presence know. He attacks Mikhail, throwing the man out of the window, while Mrs. Jones faints. However, once this is taken care of, Batman realizes that he’s made a mistake, because he was going to have to follow Mikhail to find Death, and now he can’t with him unconscious. So, he makes an odd choice.

So, yeah. Batman quickly takes care of Mrs. Jones, ensuring that she’s okay and hasn’t died from her freight, and then just gives Mikhail the diamonds so that he can tail him. And, apparently Mikhail is so dumb he doesn’t even question this turn of events, and drives straight to the fence that Doctor Death ordered him to visit. So, Batman watches Mikhail drops off the diamonds, and then follows the man back to his apartment, Batman waits a few moments, and then slips into Mikhail’s home, dropping a vial of chemicals which knock the man unconscious so that he can snoop through his belongings and get a read on Doctor Death’s location.

However, while Batman is snooping Mikhail wakes back up, and a fight ensues. Batman ends up launching himself out the window and grabbing a hold of his Batrope, swinging himself up into the air and then coming back down onto Mikhail’s head as he peeked out the window with enough force to snap the man’s neck. Because early Batman had no real oath about killing. And, with that taken care of, Batman calls the police and informs them that Mrs. Jones’ diamonds are at the fence named Ivan Herd. He then heads back to Herd’s office, and confronts the man, only to learn that he’s actually Doctor Death himself. So, Batman defeats his recurring villain, and leaves him tied up for the police to be prosecuted for his various crimes.

One of the great joys of doing this project is seeing the various iterations that Batman has taken over his many decades, and the multitude of ways that he’s changed. And, this is certainly a strange version. This is only the second time we’ve talked about a pre-Robin Batman, and I have to say, I’m not quite a fan of this guy. Yeah, the killing thing is a major part, it just feels wrong seeing Batman use his momentum to snap a guy’s neck, but he just generally feels so much more low-rent. He doesn’t have the gadgets, the car, the lair, or even the impressive house. There wasn’t even an Alfred in this issue. He’s just a sad man sitting along in a house, putting on a costume and heading out into the night on random hunches to find people to beat up. And that Batman’s kind of a bummer. It really makes sense why Robin was introduced into the story, and it’s clear what a positive addition he was. It’s still Batman, on the surface, but it’s just not quite there yet. All the elements are present, they just aren’t quite in the right order. 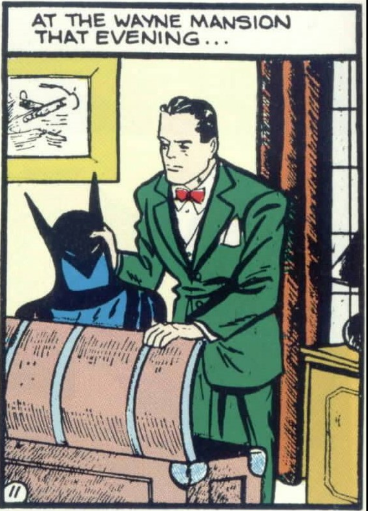