Hello everyone, and welcome back for another installment of Bat Signal, my sworn mission to read every single issue of Detective Comics, in random order, and with basically no context. And folks, we have a fascinating issue of comics to discuss today. It’s been a surprisingly long time since we’ve talked about an issue with a real, established supervillain in it, even though we’re kind of going to be fudging that a bit this week. Because we get to talk about the Mad Hatter! But, not the fun one. Weirdly, there are two Mad Hatters, one who was obsessed with mind-control, and one who just did crimes involving hats. And, it’s that second, more TV-Friendly Mad Hatter we’ll be talking about today, with one of his incredibly infrequent appearances in comics. And, while bringing in a character most known for his appearances in the Adam West show, you better believe that we’re getting a shockingly antiquated comic for 1987. So buckle up folks, there’s giant billiards.

The issue begins with the second Mad Hatter, also known as Jervis Tech even though it was later decided that he was a completely separate person, being released from Gotham State Prison. He’s an incredibly meek man, doing his best to avoid talking about hats, and is ready to leave the prison and attempt to start a new life. However, as soon as he gets out of the prison and into a waiting taxi cab, things start to get weird. Because the driver of the Taxi is none other than Batman, with Jason Todd-Robin riding shotgun. They’re here to drive the Hatter out of the prison and into Gotham while intimidating him and telling him to stay the hell away from hats. But, the Hatter pretty quickly starts inquiring about the little cabbie hat that Robin is wearing to complete the look, causing Batman to fly into a rage and just abandon the Hatter on the side of the road, figuring that he’s a lost cause. Which, is correct, because as the Dynamic Duo flee from their supposedly stolen taxi cab, the Mad Hatter gets right back to normal. Cool. And, now that he has a hat, the Hatter gets straight to work. Because the next day Batman and Robin arrive in Commissioner Gordon’s office after seeing the Bat Signal, and are informed that the Mad Hatter has sent them an empty hat box with a riddle in it. Which, kind of feels like he’s stealing someone else’s bit, but whatever. The box says that the Hatter has gone hatless, but not the way that Batman wanted, and as they ponder what that could mean, they get words that the Mad Hatter and his men are robbing some sort of gentlemen’s club known as the Liar’s Club. So, the Dynamic Duo race into action, and arrive to start kicking some ass. But, as they’re fighting the goons the Mad Hatter dons a fire-fighters helmet which also doubles as a flame-thrower, using that to escape.

So, Batman and Robin deal with the goons, and then are forced to go about their night, waiting for the Mad Hatter to strike again. But, they get a little restless for this process while hanging around Wayne Manor, and begin spitballing places that the Mad Hatter could strike. And, using the clue from the hatbox, Batman decides that the Hatter is focusing on places with metaphorical hat connections, and they decide that means he’s robbing a hockey game, since there are hat tricks. And, insanely, this is correct. They arrive at some bizarre place called the Gotham Sports Arena which is apparently where every major sport is played, including a museum of sport complete with giant versions of sports equipment. So, Batman and Robin chase the Hatter and his goons into the museum. Which of course ends with Batman and Robin fighting goons on a giant billiard table while the Hatter flees. Gotham City is a pretty rad place. But, that’s another failure for Batman and Robin. So, they return to Wayne Manor, and start plotting again. But, this time they decide they’re going to try and lure the Mad Hatter to them instead of find his next score. And they do that by planning an even perfect for the Hatter. Bruce Wayne announces that he’s going to run for the city council, throwing his hat in the ring, while also hosting a massive gala in order to drum up support, giving he Hatter a perfect place to rob. Bruce and Jason just strut around the party, keeping up the lie of Bruce Wayne. And, while they’re hanging out they notice that a bunch of straw hats with Bruce’s name are getting passed out to the crowds, hats which they certainly didn’t order.

So, Bruce and Jason slip away and suit up, and come back to the party just in time to find that Mad Hatter has arrived, and weaponized these hats, causing them to fly around the party like drones, their serrated edges threatening the partygoers. So, along with the police that Batman requested secretly be in attendance, Batman and Robin begin defeating the Mad Hatter’s goons, while destroying as many of the evil hats as possible. And, once that’s taken care of, Batman and Robin chase the Mad Hatter, who has fled to the roof of the building. The Hatter then gets into a waiting rocket shaped like a tophat, and attempts to flee. Luckily though, Batman was able to replicate the electronic signal used to control the hats, and is able to use the remaining drones to attack the Hatter’s getaway, destroying it. But, before he can begin gloating, he realizes that Robin was severely injured in the fight. Cliffhanger! 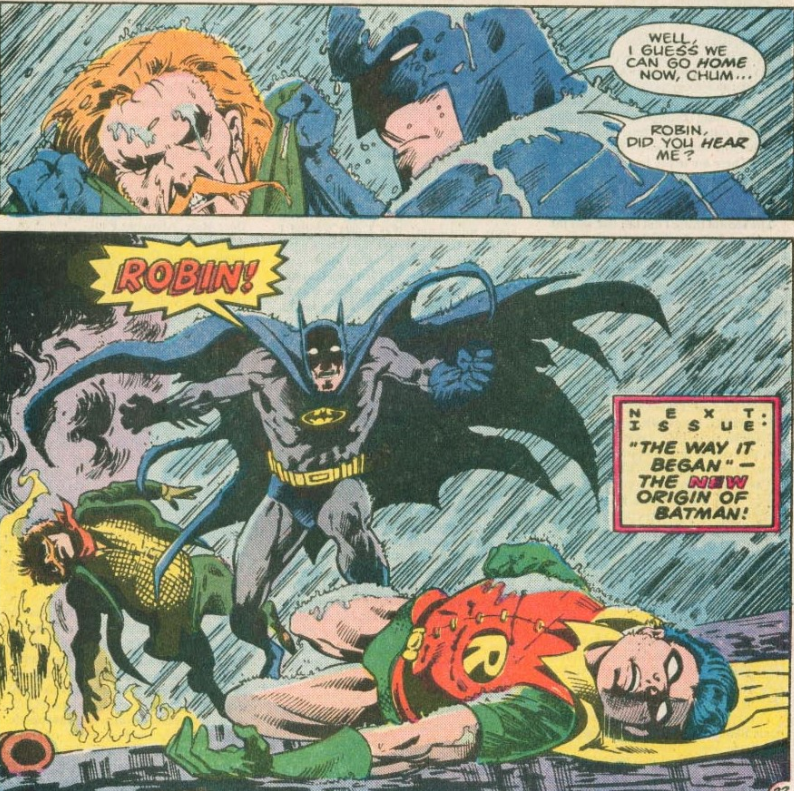 Well, actually, not really. See, it turns out that we’ve already talked about the next issue, an incredibly weird story where Batman takes Robin to Leslie Thompkins, and then has an extended flashback to an origin story that was immediately retconned by Batman Year One. So, Robin’s fine. not that we were in any real danger for that.

But, putting any of that aside, this is a hell of a fun issue. I am legitimately shocked that this issue came out in 1987, because it really and truly feels like something that we should have gotten in the 1950’s. I mean, we have a silly older version of a villain who is obsessed with a singular gimmick, pulling a series of crimes throughout Gotham City with Batman and Robin always one step behind, having huge fights on weirdly gigantic versions of normal things. That basic setup describes a majority of the stories I write about from the 50’s and 60’s, but I sure wasn’t expecting it from a late 80’s issue. And it was an absolute delight. I definitely enjoy the other Mad Hatter, with all his mind-control nonsense, but this guy was a pleasant surprise, just attacking Gotham with silly hats, and there was just something incredibly satisfying about seeing a Batman who should be grim and gritty fighting guys on top of a giant billiard’s table. I don’t know why this issue was such a throwback, but I really connected with it.

“The Mad Hatter Flips His Lids!” was written by Mike W Barr, penciled by Alan Davis, inked by Paul Neary, colored by Adrienne Roy, lettered by Richard Starkings, and edited by Dennis O’Neil, 1987.