Hi there everyone, and welcome back for yet another installment of Bat Signal, my never-ending quest to read every single issue of Detective Comics, in random order, and with basically no context. And we have a very silly issue to discuss today folks. And, as usual when dealing with a majority of comics featured on this journey, you can’t quite believe what the cover is selling. I’d love to tell you that Batman is put on trial by a bunch of insanely stereotypical gangsters, all with cigars in their mouths and Tommy guns in their hands, while a criminal judge uses a pistol like a gavel, but unfortunately, that really isn’t what we get with this issue. If you can believe it, we end up getting something much stranger. Buckle up, this one gets weird.

The issue begins by dropping a pretty astounding bit of information on us. Apparently there is a building in Gotham City that acts as a front for an underground office building of gangsters. And, not just any gangsters. It’s the base of operations for a man known as Mr. Velvet, who runs a globe-spanning criminal empire, all controlled by him. He has his finger in almost every criminal pie in the country, and he controls it all by using his own personal television studio where he beams out orders to criminals all over the world. No one in law enforcement knows who he is, and he has an absolutely stellar track record with committing the biggest and best crimes. However, that starts to change shortly after he gets word that two Gotham City criminal underlings of his have gotten into a mob war so bad, Batman and Robin were called in to stop it. Velvet quickly gets the two men responsible in front of him though, and chastises them, hoping to regain control of his empire.

Unfortunately, that’s not the case. In the days after this event Mr. Velvet starts to experience the impossible. His crimes start to get busted. All over Gotham City things start going wrong, crimes are being foiled by Batman or the police, and he has no idea who is responsible. So, Velvet decides it’s time to find the rats in his organization, and calls forward every Gotham City criminal to come before him in a televised committee meeting were he attempts to grill the possible rats and find the truth. So, with every criminal in Mr. Velvet’s country-spanning network watching live, he begins to interview every possible suspect, attempting to suss out the traitor.

And he does very poorly. None of the criminals admit what’s going on, and Mr. Velvet realizes that while he’s a very skilled manager of crime, he’s not a very good investigator. So, he decides he needs to bring in someone with more skill. Namely, Batman. But, to pull that off he’ll have to catch himself a Dark Knight. So, Velvet sends men out to commit a very obvious crime, which catches the attention of Batman and Robin, who have been pretty bored lately what with every criminal in town involved in these meetings. So, when Batman and Robin go to investigate a robbery the men split up, causing Batman and Robin to go separate ways. Which, is a shame, because the men are able to kidnap Robin pretty easily, and then send Batman a message through Commissioner Gordon telling him he’ll only get the Boy Wonder back if he agrees to meet with the criminals. Batman has no choice but to comply, and is then blindfolded and brought back to Velvet’s underground empire where he’s given a strange choice. That’s right, Batman gets to be a prosecutor for this criminal tribunal! And, using his skills as a criminal investigator Batman is able to make short work of the various men that Velvet suspects. Such as proving that a man has paint stains on his hands from using a recently painted police tip-box. And, all of this pleases Velvet. So much that he sweetens to the deal with Batman, promising that if he can prove that a man named Dapper Tim Williams is the mastermind behind this coup he’ll give Batman enough information to keep Williams behind bars for years. So, Batman starts doing his research, and slowly but surely starts unveiling every rat in Velvet’s organization, much to the shock and amusement of the various criminals watching across the country.

And it all culminates in Batman revealing that a fashionable pocket square used by Dapper Tim is actually a method for communicating with a police informant using some for of semaphore. After which, Batman is given the evidence to arrest all of these men, and a glimpse of Robin on a live feed, the quality of which is really shoddy. Which, gives Batman an idea, causing him to suddenly flee from Velvet’s compound, seemingly abandoning Robin. But, Velvet doesn’t believe that’s the case, and heads to where Robin is being kept nearby so they can execute him. However, as you would have guessed, Batman shows up just in time to save his ward, and together the Dynamic Duo are able to defeat the men and capture Velvet himself, toppling his entire criminal empire. The two old chums then head back to the Batcave to explain how Batman found Robin using a series of convoluted graphs and diagrams! Scintillating! What an incredibly silly story. I do love this strange era here at the end of the Golden Age, when comics were basically a failing business, and they were desperate to do anything that would work. And, apparently, at this point they decided that one way to get people on board with Batman was to have him prove to everyone that he’s not only the World’s Greatest Detective, but the World’s Greatest Criminal Prosecutor as well. The idea of a massive criminal empire operating underneath Batman’s nose is ridiculous enough, but to then have that empire purposefully bring Batman in to use his absurd abilities to root out corruption in said criminal organization is that extra bit of insanity that I just love from these comics. The only thing that really keeps me from loving this story whole-heartedly is the fact that I’m generally not a fan of issues that end with Batman delivering a wall of text to the reader with accompanying charts to explain how the hell he did it, basically a text-book definition of “tell and not show.” But, the majority of the story is a hoot, and is enough to bolster an incredibly unsatisfying ending.

“the Underworld Crime Committee” was written by Bill Finger, penciled and inked by Dick Sprang, and edited by Whitney Ellsworth, 1951. 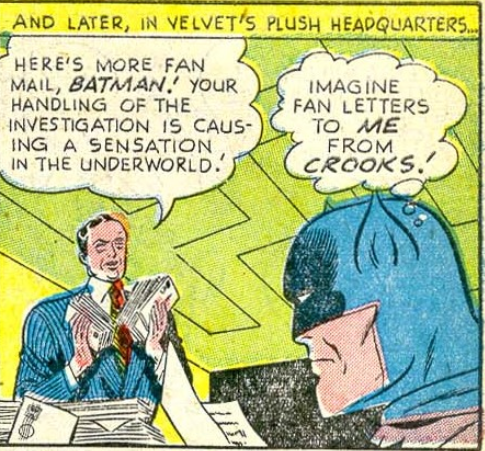