Hello everyone, and welcome back for yet another installment of Bat Signal, my never-ending quest to read every issue of Detective Comics, in random order, and with basically no context. And we’re talking about a really goofy issue this week, folks. I mean, take a gander at that cover. We get to see Batman being hunted like an animal. And, unlike some of the Golden Age comics we talk about here, we do indeed get to see that very thing. Because, awesomely, we get to have a Batman story that legitimately feels like it should feature Kraven the Hunter in it. Maybe not as swarthy a villain as Kraven, but if you’ve ever wanted to see Batman hunted on an abandoned island, I have the story for you!

This issue begins in a very strange way, with Batman arriving at Commissioner Gordon’s office to pick up his mail. Apparently, according to this comic at least, Batman starts every night’s patrol by stopping by Gordon’s office to grab any sort of messages that have been sent to Batman. And, if you’re wondering what kind of person would be sending Batman mail, the answer is apparently “a lunatic.” Because the only piece of mail Batman has received is a warning from someone calling themselves the Stalker, telling Batman that he’s going to become his latest prey that night. And, to hammer in the point, as Batman is reading the flier, complete with a picture of his head in a target, a bullet comes crashing through the window and right through the letter. Which, is pretty concerning. So, Batman retires to his penthouse above the Wayne Foundation, and begins talking with Alfred about all of this. And, to kind of get his mind off of his brush with death, they decide to put on the TV and watch some local talk show. Which, just so happens to be interviewing a big-game hunter named Carleton Yager, who just so happens to be talking about how he’s getting ready to hunt the most deadly game. But, just as Bruce starts to wonder if this is maybe their culprit, something nefarious happens.

An arrow has flown through the window of Bruce Wayne’s penthouse, and into his television, delivering a note with some pretty terrible implications. Because it’s also from this mysterious hunter, and it proves that they know that Batman and Bruce Wayne are the same person. The letter also confirms that this hunter is indeed Yager, who informs Batman that he’s going to start hunting him starting immediately, and it will be to the death. Alfred is pretty terrified by this, but Bruce insists that he has everything handled. He suits up as Batman and takes to the night, planning on visiting Yager’s office at the Gotham City Safari Club to try and gain some information about his latest foe.

Batman sneaks through the darkened streets of Gotham and arrives at the Safari Club before climbing up into the office of Yager. Batman ensures that he’s alone inside of the room, and begins investigating, taking out a flashlight to snoop. And, almost immediately he comes across the empty trophy plaque that Yager was showing off on the interview, and sees that it’s labelled to soon hold his head. And, as he’s looking at the plaque a crossbow bolt comes flying through the room and pins Batman’s cape to the wall. It also triggers a recording from Yager, telling Batman that this has all been a part of his plan, and that Batman has to now come to Urbia Island, a new development in Gotham City that’s currently being built up. So, Batman frees himself from the crossbow bolt and heads to Urbia Island, where he begins planning his assault. 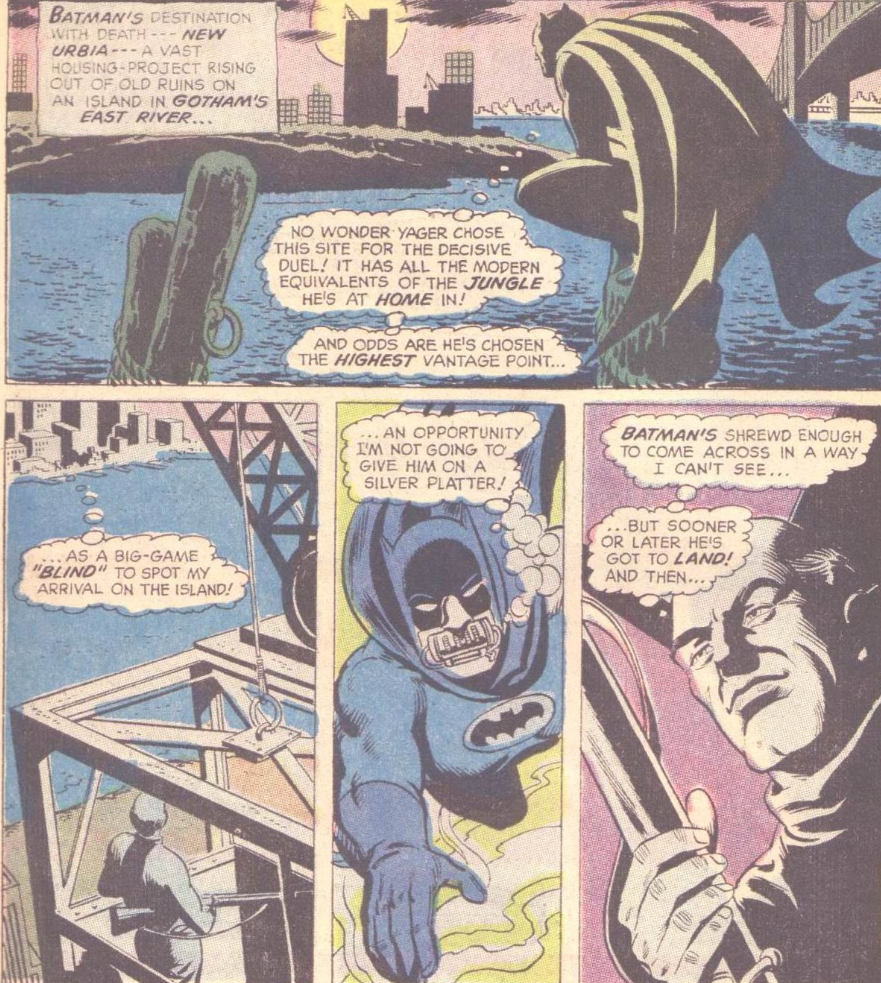 Batman notices an open pipe on the shore of the Island, and decides that this will be the sneakiest way onto the island itself, assuming that Yager will be watching the shore like a hawk, ready to snipe him. And, sure enough, Batman follows the pipe directly to the largest building on the Island, which is where he finds Yager perched. So, Batman decides to take down Yager, and attempts to drop his elevated perch down to the ground. Which, is exactly what Yager though he’d do. It turns out that this path was trapped, and Batman is snared in a net, and brought up to Yager. But, the villain doesn’t just shoot Batman. He tells the Dark Knight that this was too easy of a hunt, and tells him that he’ll give him another chance. He has already figured how long it will take Batman to get out of the net, and scurries off into the Island, telling Batman to track him down again.

Batman is eventually able to get out of the net, and he starts working his way through the Island, hoping to find Yager before he himself gets killed. He’s worried about both underestimating and overestimating Yager, but eventually comes across a small alcove surrounding by some sticky mud. Batman leaps over the mud, but stops when he hears sounds from inside the alcove. And, tucked inside and below a ramp is a shocking sight. Alfred, hogtied. Batman has no idea how Yager could have caught Alfred, but he immediately leaps into action, jumping over the ramp and drop kicking his loyal butler. Because, this isn’t actually Alfred, it’s Yager. Batman has realized that the only way into this place would have involved getting his boots dirty with that mud, and this fake Alfred’s boots are clean. Batman and Yager start fighting, but Yager quickly realizes he’s outmatched, and attempts to flee. Unfortunately, he’s not the athlete that Batman is, and is unable to jump over that ramp, which turns out to be a trap. The ground opens up and Yager is dropped down into a pit full of sharpened pikes, where he promptly dies. And, in a strange turn of events, the actual Alfred shows up, hoping to help Batman out, and the two reunite and head home.

This issue is a whole lot of fun. I will say that it was kind of a bummer to read an issue where Batman is almost constantly being outclassed by some random jabroni hunter, but I guess it all comes together at the end with Batman’s masterful mud gambit. It does seems weird that he just keeps getting tricked by Yager’s various traps, but I guess I can forgive the World’s Greatest Detective having an off night or something. Primarily because the whole idea of Batman being forced into a deadly game of cat and mouse with a man who is trying to hunt him like an animal is a very fun one.  I really don’t understand how Carleton Yager, some random doofus was able to deduce the identity of Batman, one of the greatest secrets in the world, and just used it for this silly game, but whatever, it’s the thrill of the chase that matters, and this was a pretty solid chase.

“Target for Tonight!” was written by Frank Robbins, penciled by Bob Brown, inked by Joe Giella, lettered by Ben Oda, and edited by Julius Schwartz, 1970. 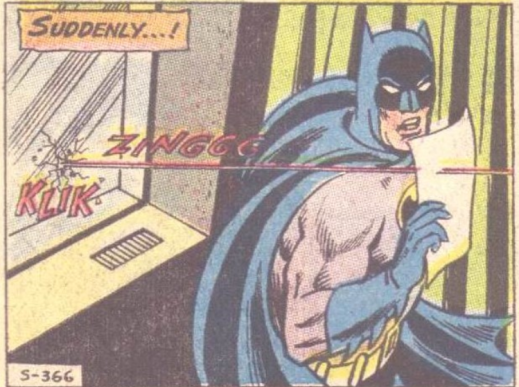