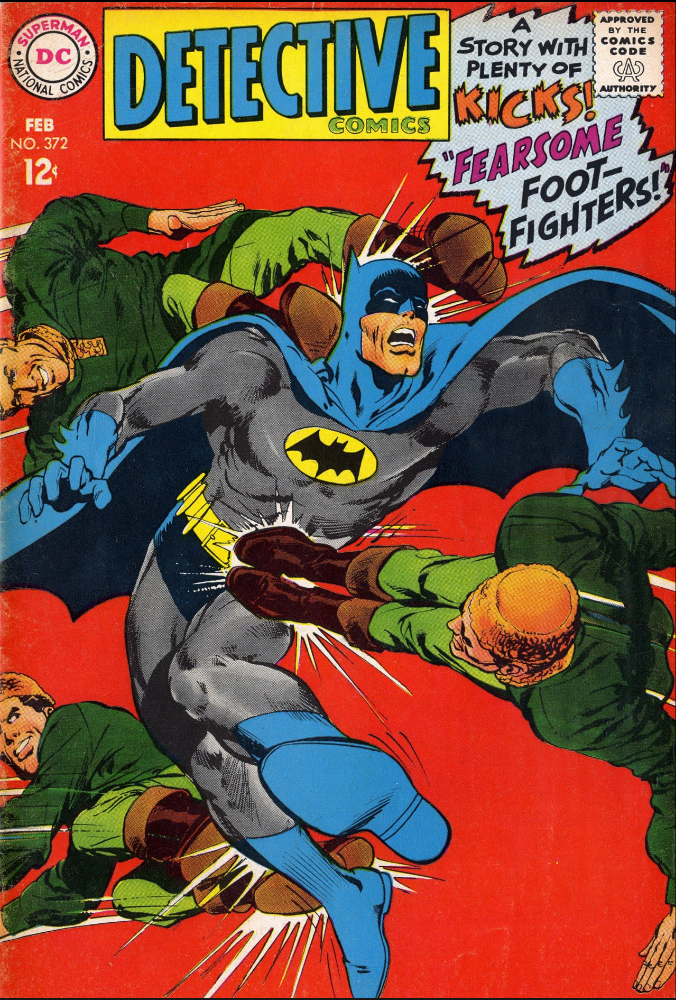 Hi there everyone, and welcome back for yet another installment of Bat Signal, my never-ending quest to read every single issue of Detective Comics, in random order, and with no real context. And I have something very goofy to share with you all this week. I mean, just take a gander at that cover. We’ve certainly learned over the years I’ve been doing this project that it’s often a foolish move to assume anything featured on the cover of an issue of Detective Comics will actually be in the story itself, but I am pleased to say that Batman does indeed get the shit kicked out of him by people in Eastern European outfits. So, if you like goulash, Bruce Wayne being the worst boyfriend in the world, and Batman getting repeated kicks to the head, I have the issue for you!

The story begins in the ritzy penthouse apartment of two wealthy Gotham City socialites, ready to attend a very trendy folk festival for the fictitious country of Karonia. Unfortunately, when the wife opens up her safe to get her fanciest jewels, she finds that they’re missing and an IOU has been let behind. And, this isn’t the only person who has had their belongings stolen and had an IOU left in its place. There’s been a rash of these thefts going on, and Commissioner Gordon has called Batman in to help him. And, literally after taking one glance at the various IOUs, Batman gets a hunch. Because he recently saw a very similar handwriting at a new Karonian restaurant. So, Bruce calls up some girl he occasionally dates and invites her out to that restaurant so he can poke around, all while mentally preparing to ditch her as soon as possible. 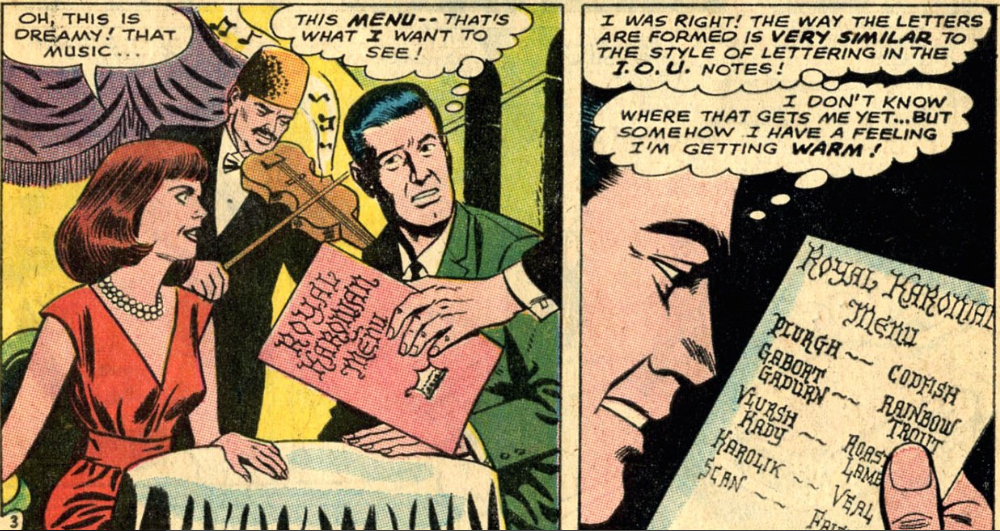 So, apparently those IOUs were written in some sort of traditional Karonian script or something, and it makes Bruce think that he’s on the right track. But, he doesn’t really have any leads other than that. Until he and his date leave the restaurant and Bruce notices two men dressed in traditional Karonian garb kicking the crap out of some guy in an alley. So, Bruce immediately calls a cab and sends his irate date packing before he runs at the two men, deciding to fight them even without his costume. And, he’s able to catch them pretty off guard, grabbing the two attackers and clunking their heads together like they’re the Three Stooges.

While Bruce waits for the two men to wake up though, the one they were attacking flees into the night. And, this turns out to be a problem. Because when the men awaken they tell Bruce that the guy they were beating up was a famous Karonian criminal named Zoldin who they think is responsible for the IOU thefts. They tell Bruce that they were attempting to apprehend him for the police, which makes Bruce realize he really dropped the ball. But, it does confirm that Karonians are involved in the thefts, so he decides to continue exploring the Karonian culture by attending that folk festival, with the same woman he infuriated earlier. So, Bruce and the unnamed date head to the festival, and Bruce begins scoping out the crowd, looking for Zoldin, when something odd happens. 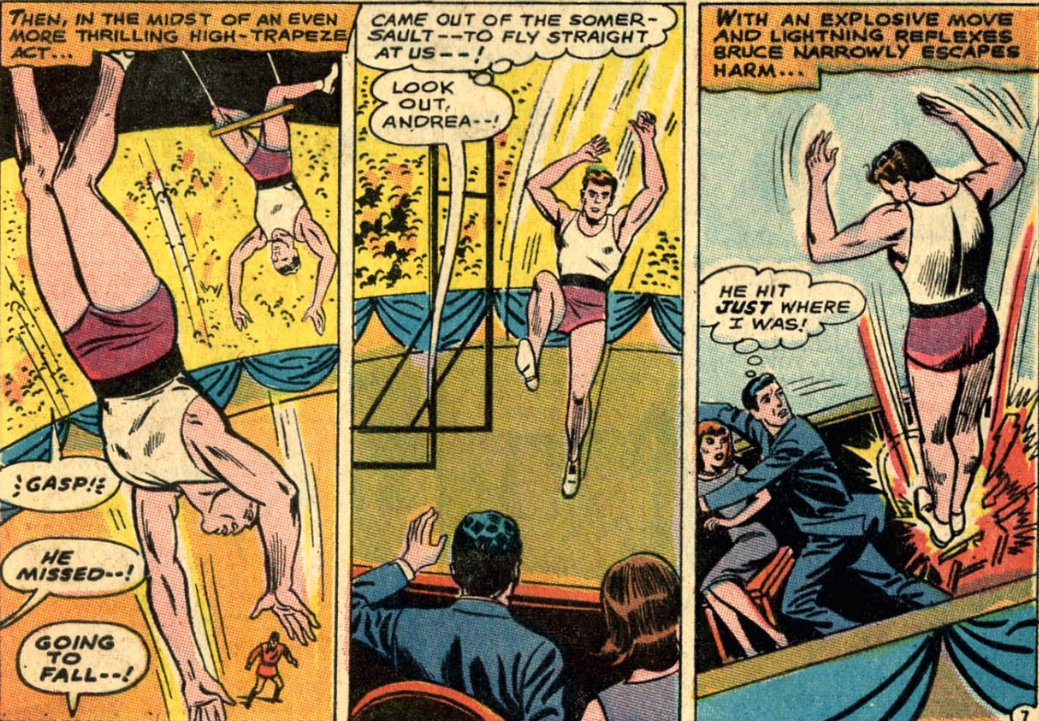 So, yeah, one of the trapeze artists seems to purposefully mess up one of his tricks so that he could come crashing down on Bruce’s seat, as some sort of intimidation play. And, what makes matters stranger, the man who almost crushed Bruce was one of the guys he stopped from beating up Zoldin the other day. So, that’s odd. Odd enough that Bruce ditches his date again and goes to follow the acrobats, assuming that they’re clearly up to something. He sees them load into a station wagon and drive off into the night, leading him to follow them. Eventually they end up at a small home in the country, so Bruce pulls over and puts on his Batman costume. However, in the time that takes, the Karonians are apparently done, and they speed off into the night.

Batman races into the home and finds Zoldin, barely holding onto consciousness. Batman talks to him, and finds out something shocking. Zoldin is the thief, but he did it for honorable reasons. Back in Karonia he was the leader of a democratic revolutionary group trying to topple the evil dictatorship, which is why he placed IOUs, planning on repaying the people after the helped save his people. Batman asks where the stolen goods are, and he responds with a word in Karonian before passing out. So, Batman takes Zoldin to the hospital, and sets out to find his attackers. He ends up at the Rainbow Hotel, where the Karonian soldiers are leaving with suitcases full of stolen goods. And, Batman’s not going to allow that. He starts fighting with the men, who all use their mastery of savate to kick Batman as much as possible. But, Batman has a perfect defense against kicks. Lots of punches! So, Batman beats the hell out of the Karonians, and eventually defeats them, taking their ill-gotten goods and returning them to the people of Gotham City. And all because he figured out that the word Zoldin told him meant rainbow in Karonian, which he learned off of a menu! 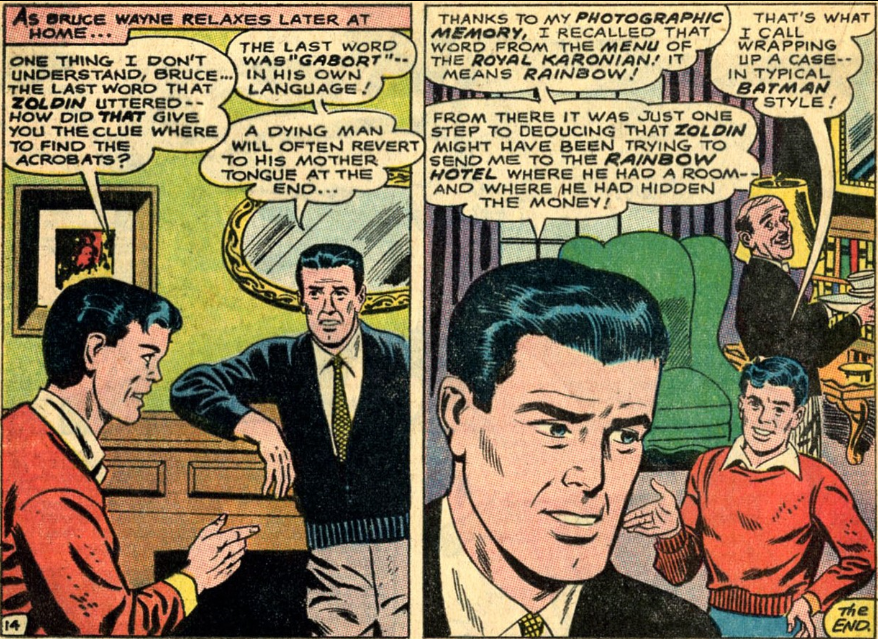 What a goofy issue. The idea of Batman fighting a bunch of Eastern Europeans who are masters of savate is a pretty great one, especially because it’s probably as close as we’ll ever get to seeing Batman beating up Batroc the Leaper. But, the way that this issue is structured is why I found myself really falling for it. I mean, we barely see Batman in this issue, it’s primarily a story about Bruce Wayne trying to solve a criminal conspiracy as himself, which was a refreshing change of pace. Although, I will say that these Karonians seemed to have a really shaky plan. Because Bruce never would have found out what was really going on if the one acrobat didn’t decide to bizarrely threaten him by almost kicking him in the face during a circus act. That dude screwed the whole thing up! Plus, I guess the people of Karonia are going to continue toiling under a brutal dictatorship, all thanks to Batman!

“The Fearsome Foot-Fighters!” was written by John Broome, penciled by Sheldon Moldoff, inked by Joe Giella, lettered by Joe Letterese, and edited by Julius Schwartz, 1968. 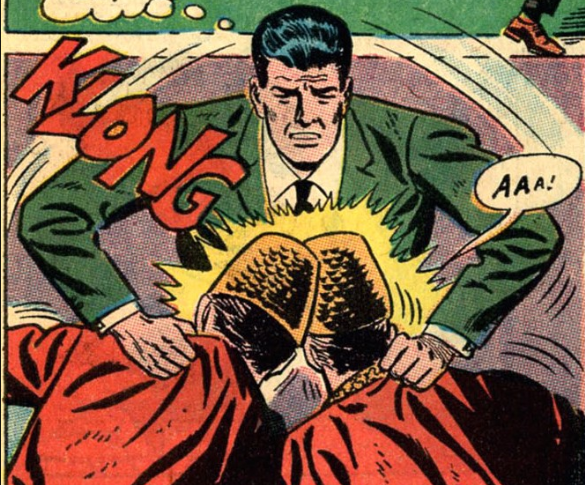