It’s almost time for us all to take another trip into the world of Earth’s Mightiest Heroes, the Avengers. After last year’s Infinity War it all comes down to Endgame, a movie that promises to reshape one of the biggest movie franchises in history. Last year I celebrated the release of that massive film by sharing a trio of ridiculous stories featuring the various defeats of the Mad Titan, Thanos. Those stories were a delight, and while I probably could have scrounged up even more ridiculous stories about Thanos attempting and failing to destroy the world, but I just couldn’t find any as absurd as Thanos fighting children or pets. Plus, we don’t even really know how important Thanos is going to be in this next movie, so I decided to shake things up, and looks for a crazy story featuring the Avengers. And, thankfully, I happened upon just the sort of crazy story that I love to feature on this site. I mean, this isn’t exactly the Avengers team that we’re going to be seeing up on the silver screen in the coming weeks, in fact it’s one of the odder assortments of heroes, but when I realized that I had stumbled upon a story that featured the Avengers forced to travel into the body of one of their own members in order to save his life, I knew I’d found something special.

This story takes place after a series of events that led to one of the founding members of the Avengers, Janet Van Dyne the Wasp, taken to the hospital. The Avengers had been fighting with some weirdly defined villain known as the Stranger, and after being injured she was rushed to the hospital, where she was almost immediately attacked by a supervillain with a grudge named Whirlwind. Janet’s husband Hank Pym was able to defeat Whirlwind with the help of the newest Avenger, the former X-Man known as the Beast, but at a pretty dangerous expense. See, at this point in Hank’s career as a superhero he wasn’t exactly supposed to use his size-shifting powers, thanks to a potentially deadly microbe that’s in his bloodstream. Recently he used his abilities to shrink down to the size of an ant, and was unable to return to human size for quite some time. But, this time he’s having the opposite problem. Because when he grew to his giant size to fight Whirlwind, he found himself unable to shrink back down. And, what’s even more alarming, he appears to be growing. Because, as Hank and Beast…also a Hank, make their way back into the hospital to check on Janet, Hank passes out and slowly begins growing right there on the curb. Beast springs into action and races off to get help. And, since he’s just recently joined the Avengers he figures that that would be best gotten from some of the other members. So, Beast rapidly scales the side of the hospital and tosses himself into Janet’s room, where he finds Thor standing vigil. Beast quickly tells Thor what is going on and the two head back down to the street, only to find that Hank is still passed out, and has grown quite a bit in just the few minutes that he was alone. And, he’s starting to draw quite a crowd.

And to make matters worse, the doctor who has been attending Janet is not exactly pleased with the Avengers, and not in the most willing mood to help Hank. He was pretty pissed off that Janet’s mere presence in his hospital led to a goddamn supervillain attack, and now the husband of a critically wounded woman has done something stupid and put his own life in peril, possibly drawing more superpowered shenanigans to his hospital. Plus, he doesn’t really have any ideas about how to help a man with science-defying abilities to stop growing. But, Beast thinks that he may have an idea. See, this is still from an early time in Hank McCoy’s life as a big furry blue creature. Before that he’d been a relatively normal looking mutant, but when he worked at a think tank known as the Brand Corporation, he accidentally turned himself into the Beast we all know and love while working on a cure for mutation. And, he thinks that he may have also heard of another bit of chemical work being done there that may save Hank’s life. So, Beast heads to Brand and sneaks into his old place of work, ready to save an Avenger. 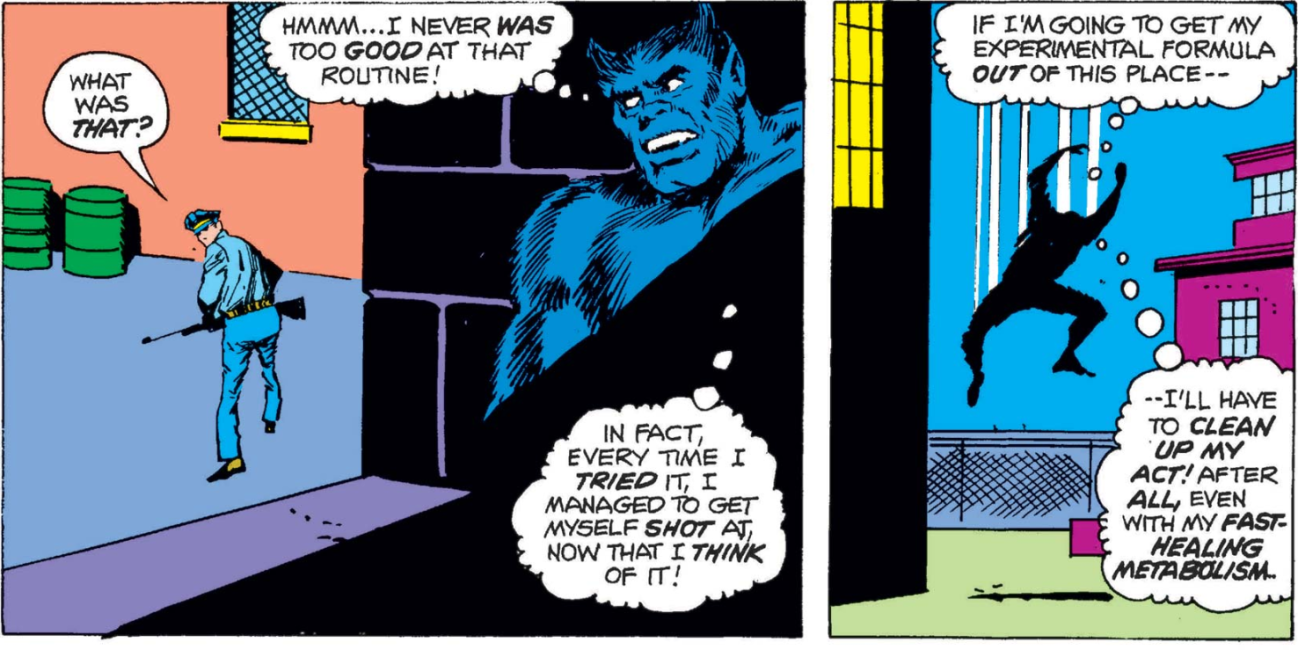 Beast begins sneaking around the Brand Corporation, aware that he’s not exactly the most popular person in these parts. For a while he basically haunted the facility, sneaking in and out each night and becoming something of a boogeyman. Which, has led to a much higher standard for security than he was used to, taking the form of a new guard station in a place he wasn’t anticipating. The guard spots Beast and sounds an alarm, drawing in a group of security guards who aren’t exactly trigger-shy.

Beast is forced to race around the facility, avoiding bullets while trying his best to remember where the experimental serums were kept. And, thankfully, his memory is pretty strong, and he’s able to quickly come across a secure room that contains just the serum he needed. So, he palms the serum and makes a hasty retreat out of the facility, heading back to Hank Pym’s increasingly large form. And, he’s not the only one, because it turns out that the Vision and the Scarlet Witch, recently married, are returning to New York after a brief honeymoon. And, while flying through the city they spot the massive body of Hank Pym, and land their ship to see if there’s anything they can do to help. 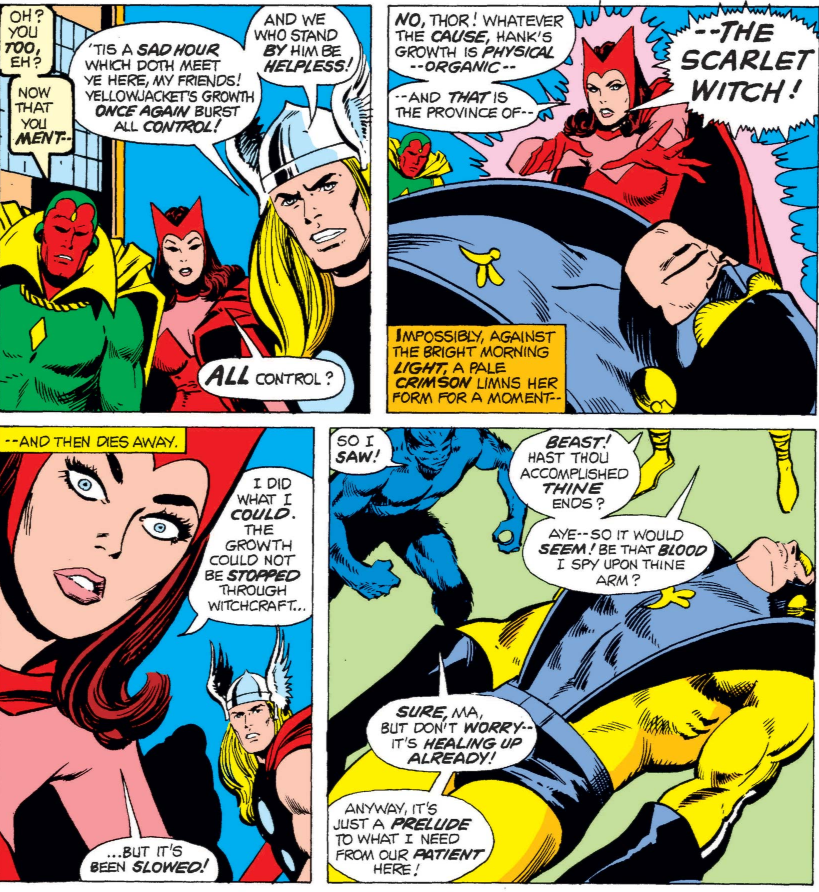 Vision isn’t really helpful at the moment, but Scarlet Witch does think that she may be able to help Hank. Her magic can’t quite deal with his affliction, since it was created by science, but her spells are able to slow his growth down, which could potentially save his life as they wait for Beast to return. And, thankfully, he returns just in time, with the serum that’s needed to neutralize that pesky microbe in Hank’s blood that’s keeping him from controlling his powers.

Unfortunately, for reasons that aren’t exactly made clear, Beast isn’t quite sure if the serum will work for Hank in its current form, since it wasn’t designed for someone whose cells have been affected by Pym particles. Luckily though, they do have another person with similar cells that Beast could do a little experimentation on. So, they race upstairs again to see if Janet’s doctor would be willing to let Beast experiment on her blood samples. And, he’s not a fan of this idea.

The doctor refuses to let these colorful weirdos play around with Janet, whose life is in imminent danger. He doesn’t trust that any of them actually know what they’re doing, and won’t allow them to mess with one of his patients. But, it turns out that the Avengers have an ace up their sleeve, albeit one they don’t even realize they have. Because, as we’ve discussed before on this site, for a considerable amount of time in his early years, Thor wasn’t just the God of Thunder. He was actually a crippled doctor named Donald Blake who could turn into Thor by stamping his cane on the ground. So, Thor slips out of the room, reverts to his Donald Blake form, and struts back in to vouch for the Avengers.

And, this works. Janet’s doctor trusts in Blake’s opinions, and allows the Avengers to experiment on her blood in order to save her husband’s life. So, Blake draws some of Janet’s blood, and begins examining her, making sure that she’s still in stable condition, while Beast gets to work retrofitting his serum to help Hank. He holes up in an apparently unused laboratory in the hospital, and after quite a bit of work he finally cracks it. Beast is able to adapt his serum and giddily leaves the hospital to deliver the serum to Hank, who is being watched over by a very flustered group of Avengers. And, when Beast gets down there, he sees that things have continued to escalate. 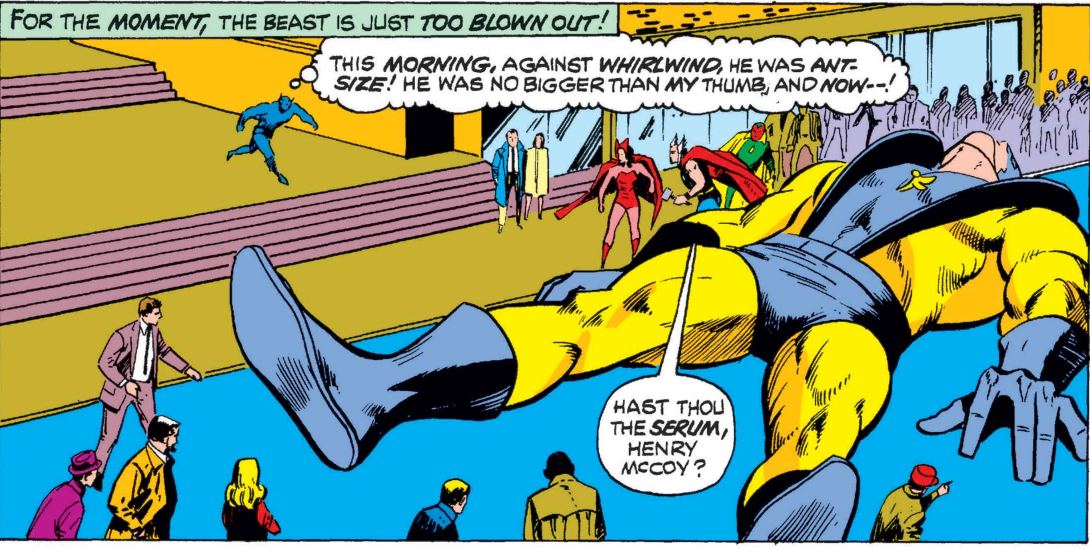 So, yeah, that’s less than ideal. Hank has grown to a very dangerous size, which means that they’re going to have to get this serum into his system as fast as possible. It could be injected, you know, the normal way, but they fear that that may not be fast enough. Plus, earlier in these character’s histories Hank Pym once shrunk himself down to a minuscule size in order to travel into the body of the Vision in order to fix a malfunction. So, seeing a debt that needs to be repaid, Vision has decided to deliver the serum directly into Hank’s body.

He takes Beast’s serum, pours it into his weird cape, and uses his density powers to turn himself intangible, which apparently also affects the serum. Vision then lowers himself into Hank’s massive body, floating through his various innards like a specter. Vision traipses through Pym’s body for a while, waxing poetic about what a solemn duty this is, saving the life of a man who technically speaking could be considered his grandfather. And, eventually, Vision comes across Hank’s heart, and enters it, releasing the serum. Vision then leaves Hank’s body, and sees that the serum is remarkable fast acting, as Hank is already waking up and regaining his normal size. And, once Hank is fully awake he and the rest of the Avengers race up into hospital to find that something miraculous has occurred. Janet is awake! So, the day is saved and the Avengers are whole again!

I feel like when people remember Avengers stories they usually just remember the huge events. Stuff like the Kree/Skrull War. And, they tend to just glaze over these weird little stories like this. And, as I’ve made clear over the years that I’ve been writing about weird Marvel stories, I have a serious soft spot for these little forgotten oddball stories. In recent years what it means to be an Avengers comic has changed quite a bit. Now, primarily thanks to the influence of the movies, the Avengers has become a flagship title, full of the biggest and most popular heroes, going on the biggest and craziest adventures in the Marvel Universe. But, back in the day the team was just kind of a home for misfit toys, a bunch of weird characters who could be stuck together, leading to some really weird teams. In the grand scheme of things, this team is pretty straightforward, but I’m always glad to talk about a story where the Beast is a member of the team, because I really think he works well as an Avenger. And, when he’s placed in a story like this, where they have to send the Vision inside of Hank Pym to save his life, it’s exactly the kind of nonsense that I’m here for. Because one of the things that I enjoy most about old Avengers stories is that sometimes when they aren’t saving the galaxy from some terrible foe, they have to deal with their own stupid misadventures and mistakes. They’re a team that gets put together by weird circumstances, and are forced to make these partnerships work. And, sometimes that means you need to dive into your grandfather’s heart.

Avengers #140 “A Journey to the Center of the Ant” was written by Steve Englehart, penciled by George Tuska, inked by Vince Colletta, colored by Petra Goldberg, lettered by Charlotte Jetter, and edited by Marv Wolfman, 1975.