Hi there everyone, and welcome back to yet another installment of Bat Signal, my endless mission to read every single issue of Detective Comics, in random order, and with basically no context. And, we’re travelling back to the Golden Age this week to talk about an incredibly goofy story featuring one of my favorite Golden Age villains, the Penguin. We’ve talked about the Penguin quite a few times during this project, sometimes in a more modern setting and sometimes from the earlier days of the Caped Crusader. And, while I certainly enjoy some of the more modern additions and characterization to the Penguin, I’m a huge sucker for how incredibly weird and goofy his Golden Age appearances tended to be. Back when they really kept Batman villains shackled to their weird gimmicks, and the Penguin was lucky enough to have like, three strange aspects to him that could be mined for silly stories. So, buckle up for a story that really feels like it would have been relegated to Mr. Freeze if it had come out a few years later.

The story begins while Gotham City is in the grips of a terrible heat wave, causing quite a bit of consternation from its already beleaguered citizens. Everyone is busy looking for a way out of the heat, except the recently escaped Penguin and his henchmen, who are hiding out in a special new headquarters which is kept at an icy degree. The whole building has an ice motif, and the Penguin even sits atop a solid ice throne. But, it’s all integral for his latest scam, which involves his henchmen delivering three large pine boxes to various places around Gotham. And, the one we happen to follow ends up arriving at the offices of a random shipping company that just so happens to have Bruce Wayne as a boardmember. And, while the board are meeting, some delivery men arrive with the box and leave before the boardmembers can open it. And, when they do, they find something a little startling. Yep! There is what appears to be the preserved corpse of a man named Rogers, who was missing from that days board meeting. But, while most of the members assume it’s a dead body, Bruce reads a note that informs him he’s actually in some sort of cryogenic state that can only be reversed if they play ball and pay a $50,000 ransom. So, Bruce encourages the other board members to pay the ransom and leave the police out of it, so that he can investigate the crime on his own as Batman. And, the next morning when he and Dick Grayson get ready to look for leads, they find that two other people have been put in the same scam, leaving identical messages in the newspaper. Which, leads the Dynamic Duo to ask Alfred if he has any ideas about where they should start. And, rather obviously, Alfred notes that they should probably start by investigating places that would have the equipment to freeze a human being.

Luckily for Batman and Robin, Gotham City apparently has a vast refrigeration district, so they suit up and head to a neighborhood filled with warehouses. And, almost immediately, they comes across the Penguin just walking down the street carrying a large bag. Penguin panics when he sees the Dynamic Duo, but he’s luckily carrying an umbrella that fires a razor wire net out of the tip, which distracts the crimefighters long enough for him to flee. But, in the chaos one of his bags was apparently ripped open, leaving a trail of white powder. So, they follow the trail and end up in a warehouse that used to belong to the Quick-Freez Company. They walk into the warehouse, and almost immediately slip and fall down a series of icy steps before landing in the Penguin’s lair, where he is awaiting them. And, cutting the customary monologue, the Penguin just jump straight to threats.

The Penguin has covered his base with giant icicles, and has given himself a special umbrella with a heat ray, so that he can activate it and melt some of the ice, causing the giant icicles to fall on the Dynamic Duo. And, instead of just spearing their heads through, all it does is knock them unconscious. So, with our heroes incapacitated, the Penguin drags them into a large freezer where he’s going to just let them freeze to death while he delivers bags of useless salt to the people he has ransomed. Things look dire at this point, but Batman is able to pull himself out of unconsciousness, and thinking fast comes up with a plan. He slips off his utility belt and uses it to pry an ammonia pipe off the wall, using it to smash his way out of the freezer before they a) freeze to death, or b) die of ammonia inhalation.

Batman and Robin don’t leave the Penguin’s base immediately though. First they poke around, and end up finding the three people’s whose frozen bodies were in theory delivered to people. It turns out that Penguin doesn’t have some sort of cryogenic technology, he just made wax dummies of people and sent them out, too afraid to actually kill anyone. So, Batman and Robin free the kidnapped people, and lay in wait for the Penguin and his men to return with their ill-gotten money. And, when they finally do arrive, the Dynamic Duo jumps into action, and make quite work of the Penguin’s henchmen. Penguin himself panics though, and grabs a new umbrella, one with an explosive shot that he intends to use to blow Batman in half. Luckily though, Robin is able to grab a giant block of ice and channel his inner curling professional, and slide the big ice block right into the Penguin, causing his shot to go wide and cause a whole bunch of ice and snow to fall on him and his henchmen, making easy arrests for Batman and Robin. 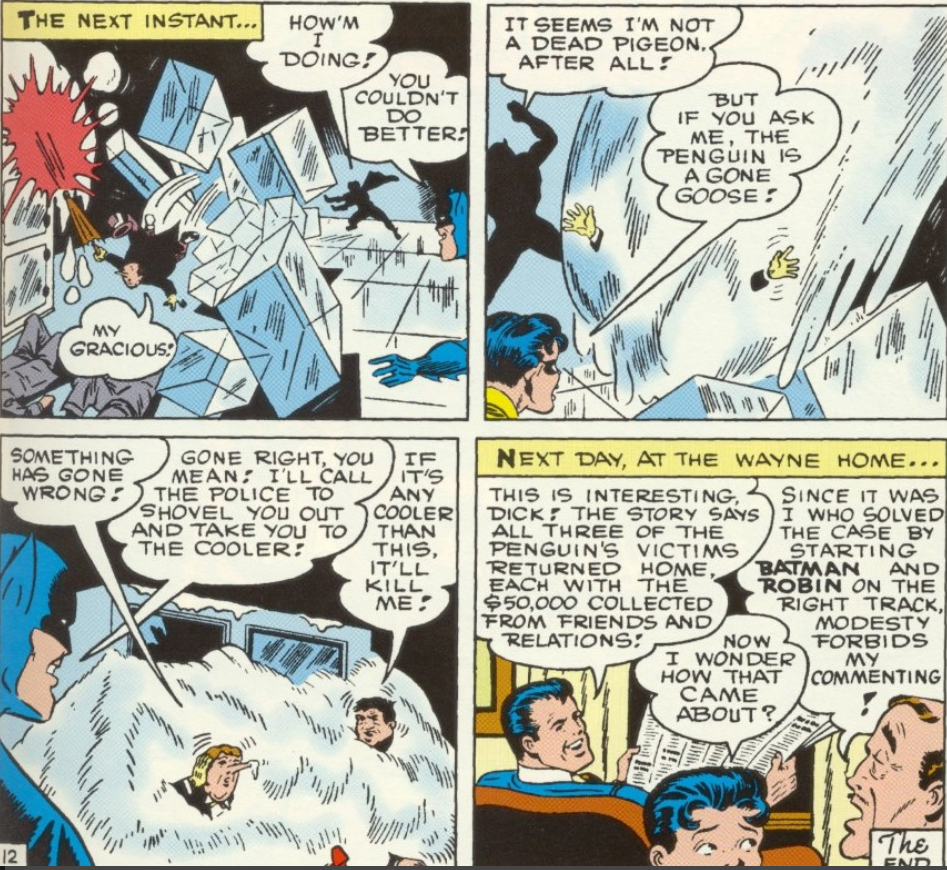 This is exactly the type of silly Golden Age story that I’ve developed a serious soft spot for. Yeah, there’s no treks into the vast wilderness outside of Gotham City, but we get a classic villain relying on his ridiculous gimmick and some good old fashion detective work, which I just adore. Plus, we got that great, poppy Dick Sprang art that I love so much. The Penguin is one of those Batman characters who has really lost quite a bit of his old gimmicks in the ensuing decades, often to great results. I like the modern Penguin, the weird mobster and information broker who operated out of an ice-themed casino. But, I’m also a sucker for this older version of the character, the guy who only committed crimes relating to his numerous and strange obsessions. Sometimes it was umbrellas, other times it was rare birds, and other times it was ice related, all while giving off an air of upper crust bourgeois. And, like I said up top, I feel like this story falls more in line with something you’d expect from Mr. Freeze, but that character wouldn’t come about for almost fifteen years after this issue, so I guess they looked around at their stable of villains and found the one most related to ice. And, it works!

“The Temporary Murders” was written by Don Cameron, penciled and inked by Dick Sprang, lettered by Pat Gordon, and edited by Jack Schiff, 1945. 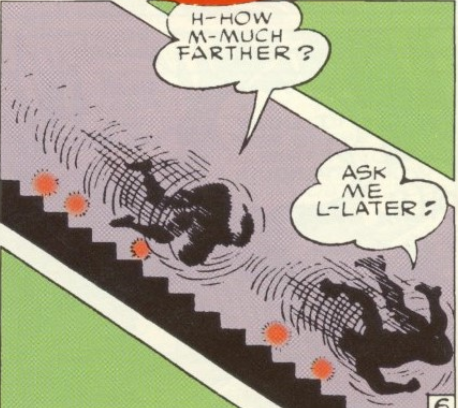