The Hodgepodge Fantasy of the Blade Itself 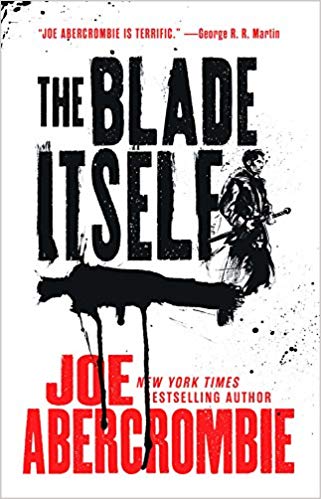 Every now and then I find myself with with a strong desire to dive into some dorky fantasy. I’ve talked about this before, but my love for books began as a little kid when I started to get obsessed with fantasy. Stuff like the Lord of the Rings, the Chronicles of Narnia, and the Neverending Story were some of my favorite books growing up, and I occasionally find myself drawn to dive back into an extremely well-realized fantasy world. And, after recently getting into the wonderful Critical Role podcast, that need to read some nerd-ass fantasy became too strong to ignore, and I started searching through my Kindle to find some fantasy I hadn’t read yet. And, while looking around I came across a book that had come highly recommended to me, Joe Abercrombie’s the Blade Itself, the first entry into his First Law series. I didn’t really know very much about the book, but I decided to dive right in, seeing if I’d find myself a new fantasy series to occasionally dip back into whenever I get that fantasy craving. And, I do think it worked out great. I really did enjoy this novel, even though now that I’ve read it all I kind of get the feeling that this entire story was just preamble for a larger narrative.

The Blade Itself follows several different characters as they go about their lives, slowly but surely coming together to start an adventure. For most of the novel they are disparate characters, having their own journeys, before all meeting up in the large capital city of this world’s largest and most powerful empire. In the wild north we get to meet Logen Ninefingers, one of the North’s mightiest and most legendary fighters, a veteran barbarian who can commune with the spirits and who is approached by a novice wizard, telling him that his destiny is to follow him and meet with his master, Bayaz. Bayaz is a seemingly centuries old wizard, and has decided to make a position in a conflict between a fledgling Northern empire and the Union, and he needs Logen to accompany him to the capital. Inside the capital we find a handsome and vain young warrior Jezal dan Luthar, who is training to compete in an incredibly prestigious fencing tournament that will earn him honor before the coming war. We also meet Sand dan Glokta, a former war-hero who was tortured for years in a rival nation, and is now a twisted and bitter man, working for the Empire’s Inquisition, torturing people to keep the king’s peace. And, far to the South we become aware of a wild escaped slave, Ferro Maljinn, who has freed herself from bonds and wishes to kill everyone who has wronged her, but who is sent North to the Union with one of Bayaz’s colleagues.

These characters have their own adventures for a while, living their own lives. But, when Bayaz and Logen arrive in the capital, it becomes impossible to ignore them. Bayaz theoretically has been alive since the formation of the Union, and he played a pivotal role in it’s foundation, so he arrives expecting a grand welcome. But, no one trusts that he’s not a charlatan, especially Glotka and his colleagues at the Inquisition, and they begin investigating him. But, things change after Jezal does win the big fencing tournament, thanks to some magical intervention from Bayaz. Because at a celebratory banquet the Inquisition attempts to catch Bayaz off guard, bluffing him into opening a mythical building in the capital no one has ever been inside. But, Bayaz agrees, and ends up taking Logen, Jezal, and Glokta into this mystical building, gaining some artifact that Bayaz needed for his real reason for coming to the capital. He’s going to launch an expedition to journey across the ocean, past the known world, and has decided that Logen, Jezal, and Ferro are to join him. So, they set said for the unknown, while Glokta is sent to the South to stop an impending war.

I really enjoyed myself with this novel. It was full of excellent world-building and a whole litany of well-realized characters, all of whom came together to create a really fun story. But, as you maybe can tell from that plot description, not a whole lot happens in this story. I didn’t even really notice it until I was approaching the end of the book, and reflected back on the fact that the story, while enjoyable, didn’t really gain a whole lot of traction. I understand that it’s a trilogy, and that this just served as the first act of a larger narrative, but it does make it so that reading this book feels a little unfulfilling, just a taste of a larger story. And, because I make an effort not to get hunkered down with one series, and spread books out over months, if not years, so that I’m not writing about the same thing again and again, it made me a little worried that when I inevitably pick up the second book I’ll have remembered nothing, because not too much happens.

But, what does happen is a whole lot of fun. And, I think one of the keys to this novel’s success, and the reason that I didn’t let the set-dressing feeling of it keep me down, was the fact that this story felt like a bunch of different fantasy archetypes crashing into each other, as if from different stories. Logen and Bayaz seem to come from something more akin to Conan the Barbarian, a brutal sword and sorcery tale full of violence and destruction. Glokta almost feels as if he’s from something like A Song of Ice and Fire, a more grounded fantasy that tries to take the horrors or real history, the Inquisition, and place it into a fantastical world, letting him reflect the darkness that usually gets skimmed over in medieval fantasy. And Jezal practically feels like a fairy tale, the guy does get a lot of inner turmoil and development, but he’s a handsome nobleman whose whole goal in life is to win a sword-fighting competition, which seems at odds with what everyone else is doing. And yet, all of these different flavors of fantasy end up pairing very well with each other, showing that while fantasy may have any number of different facets, they all are playing in the same ballpark and can be combined in fascinating ways.

The Blade Itself was written by Joe Abercrombie, 2006.