Hi there everyone, and welcome back to yet another installment of Bat Signal, my never-ending quest to read every issue of Detective Comics, in random order, and with essentially no context. And boy do I have a weird issue to share with you today. I don’t even know how to prepare you all for this story, because I really haven’t tackled many like this. It’s dark and gruesome, while also featuring a nearly unrecognizable Batman, one who is lovelorn and complaining that no one wants to hang out with him. It’s time to get downright moody, folks, and dive into the world of late-eighties Batman comics. Buckle up, we’re in for a weird adventure.

The issue begins on a stormy night in Gotham City, and we enter the apartment of a stewardess who is nursing a cold. The narration is laying down some heavy-handed thoughts on the nature of love, and it’s interrupted by a thunderous knock on her door. She opens the door, wondering aloud if it’s “Jim” who is calling on her. But, it turns out that it’s actually an ax-wielding maniac in a trenchcoat and fedora. He starts yelling at the woman, talking about how they used to be in love, and that she left him for someone named George who she claimed to have loved more than him. But, now she’s apparently waiting for someone named Jim, and that just proves some point he has about her being unfaithful. And, before she can say anything to her own defense, the mysterious man kills her with his ax. Which, inevitably warrant the attention of Batman, who is brought in to investigate, only to find that Catwoman is already there, but unwilling to work with him. Batman pushes it out of his mind though, and begins looking into the grisly crime scene.

Apparently this issue takes place at a time when Catwoman and Batman had been both working together as crimefighters, and have been in a romantic relationship. Both relationships seem to be on the rocks though, and Catwoman appears to be eager to spread her wings and be her own crimefighter, meaning she’s taking the lead on this one, and not really waiting for Batman to tag along. Harvey Bullock ends up telling both her and Batman that they’re unable to make a positive ID, and thus this corpse could be two possible women, both of whom are stewardesses. So, Catwoman take the initiative to head to the airport in the hopes of finding which woman is still alive. And, it turns out that things are a little complicated. The police had assumed that the dead woman was Nancy Campbell, because her boyfriend Jim had shown up. But, Nancy is alive and at work, having agreed at last minute to switch shifts with her roommate Mona Lamont, who had a cold. So, Mona is the victim, which means they have at least something to go on.

Catwoman brings Nancy back to the apartment to help reassure Jim that she’s still alive, and to give them some possible tips. She says that she didn’t know Mona all that well, but she does know that her boyfriend, George Micheals,  does live nearby. So, Batman and Catwoman head over to George’s apartment to give him that bad news. He’s crushed, but he does remember Mona once telling him about a former boyfriend who harbored a grudge, a guy named Roy who worked at a chemical plant. Batman offers to go check into the guy with Catwoman, but she acts very coldly to Batman, leaving him alone to hilariously stare at a stalagmite in the Batcave that kind of resembles a cat. And, the next day, both Batman and Catwoman arrive, independently, at the chemical plant of the supposed suspect. They meet Roy Spivey, Mona’s ex-boyfriend, who does seem rather hostile towards them. But, Catwoman has decided that Spivey couldn’t possibly be the murderer, but does consent to doing a stakeout with Batman. So, that evening Batman and Catwoman start staking out Spivey’s apartment, watching from the rooftops to see if he would leave. But, Spivey is aware that Batman and Catwoman could possibly be watching him, so he ends up just hunkering down, and calling up an acquaintance to come beat up Batman for him. Which, isn’t a great plan. But, he does luck out, because Batman’s kind of off his game that night, after having gotten in a big fight with Catwoman on the rooftops, squabbling about their dying romance, before she leaves abruptly. So, Batman is a little distracted when he leaves his stakeout, and gets jumped by Spivey’s hired goon. The Dark Knight is still able to mop the floor with this random dude, but it does seem to confirm that Spivey is someone to be watching, even if the guy refuses to give up his employer.

An entire month them passes, with Batman becoming increasingly obsessed with this unsolved case. Catwoman has apparently been picking up the slack, going on nightly patrols while Batman just obsesses over Spivey, and Jason Todd starts making out with a girlfriend. And, on a fateful evening, Catwoman comes to confront Batman, telling him that he’s letting this case destroy him, and that obviously spills into a dramatic argument between the two about their failing relationship that ends with Catwoman admitting that there is someone else in her life. And, while all of this is going on, we learn that Spivey actually is the killer, and he’s been using some chemicals from work to treat Mona’s severed head, shrinking it down and preserving it so he can occasionally go down to the boiler room where he’s hidden it to yell at it. And, before leaving us on that incredibly grim note, we learn that the other person it Catwoman’s life is actually a panther that she’s apparently been raising in her apartment with the intention of making it help her fight crime. Which is insane, but that’s where the issue leaves off, promising a conclusion in Batman, and since we don’t talk about that comic on this project, we’ll never know what happened! 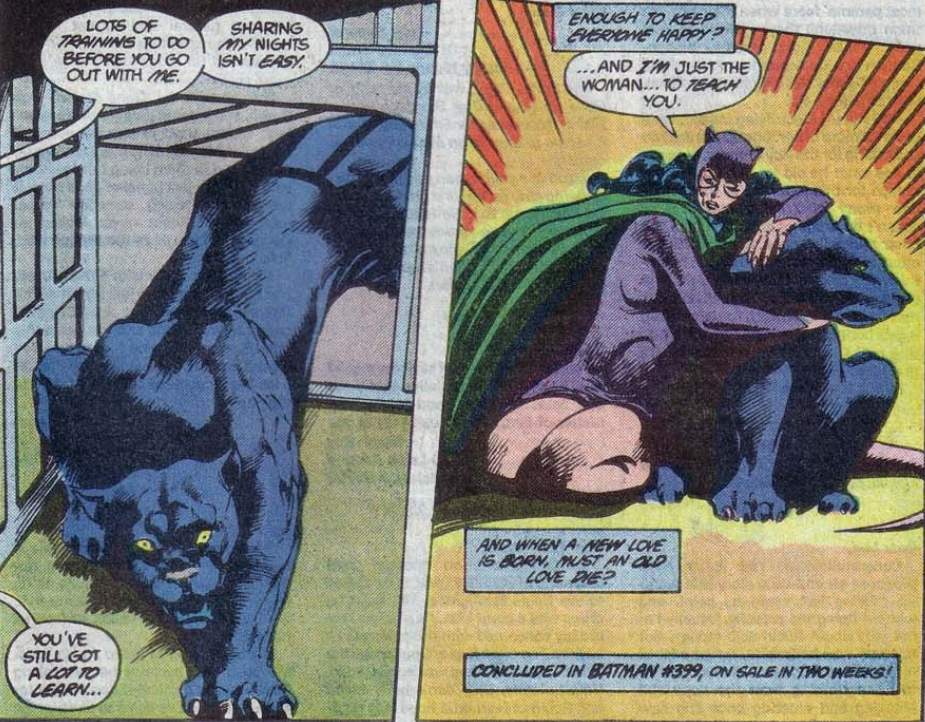 This issue is incredibly strange. And, primarily because it’s from that very odd period in Batman’s history where he seemed to be at a crossroads, abandoning the somewhat goofy aesthetics of the Golden, Silver, and Bronze Ages and embracing the grim and gritty world of the late 1980’s comics. Which gives us a comic that on a single page can feature a man yelling at the severed head of a woman he’s killed and Catwoman planning on somehow teaching a wild panther how to fight crime with her. Those two concepts don’t belong in the same comic as each other, let alone the same page, and it ends up creating some sort of cognitive dissonance. It’s an issue full of growing pains, getting rid of the old and embracing the new, all while saturated with a very unpleasant Batman who is just yelling at Catwoman for not being in love with him anymore. Things were rough this week, y’all. Plus, because this story was finished in a book we don’t talk about, there’s not even a conclusion. But, as always, I’m going to go out on a limb and assume Batman saves the day. Just, probably not his relationship.

“The Love Killing” was written by Doug Moench, penciled by Gene Conlan, inked by Bob Smith, colored by Adrienne Roy, lettered by John Costanza, and edited by Len Wein, 1986.