Dumbo and the Monetization of Wonder 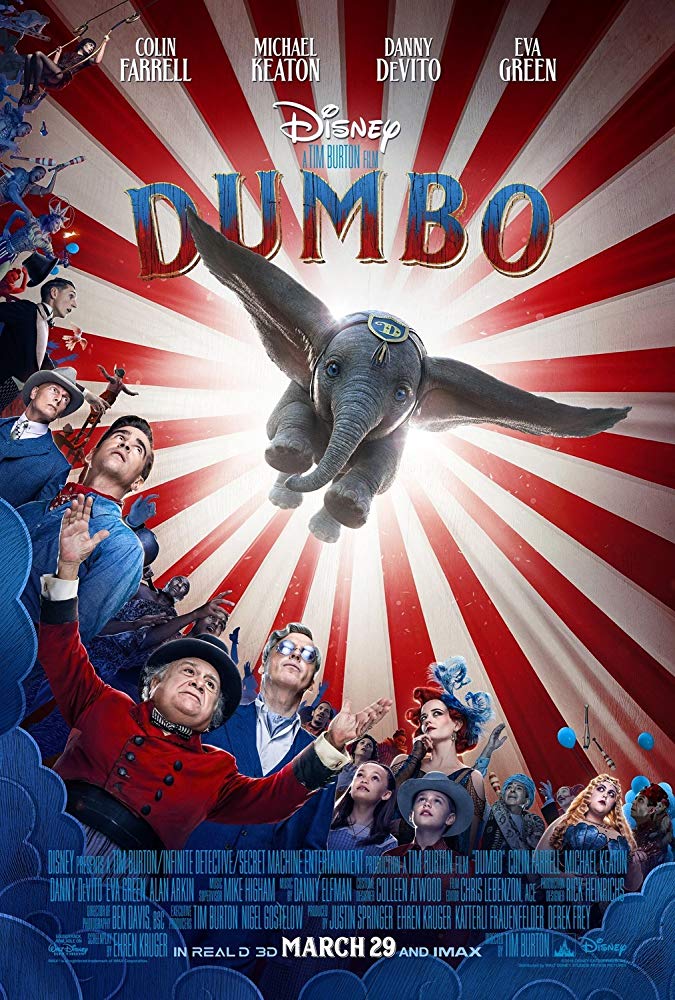 It’s now clear that we’re going to be enduring a whole bunch of “live-action” Disney remakes. When this all began, it seemed like a strange endeavor that could potentially lead to interesting things. But, it’s so far been a crapshoot whether the movies actually are worth it. Cinderella was incredibly forgettable and skewed too closely to the original to actually be interesting. Jungle Book also followed its original a little too closely, but by and large that one worked for me, primarily because of the amazing effects and cast. Pete’s Dragon has probably been the best of the bunch, and it really told its own story, not resembling its original too heavily while just becoming a very heartfelt and personal story. But, then we got Beauty and the Beast, which fell into a very similar camp as Cinderella, occasionally feeling like it was a shot for shot for shot remake, really making me nervous about what the rest of these movies were going to be. Because Disney has been on a tear, greenlighting these remakes at a staggering rate and we’re basically at the point where every movie in the fabled Vault is about to be remade. And, after Beauty and the Beast, I felt like the only way these movies weren’t going to become rapidly tedious was if they stopped being such similar adaptations, and attempted to do something new with the material. Which, brings us to the latest remake, Tim Burton’s Dumbo, a movie that virtually redefines the entire plot of the threadbare original to do something very unique. And, well, it turns out that lack of originality wasn’t the only problem.

Dumbo begins exactly where you’d think it would. With a recent amputee returning from fighting in World War I to console his children whose mother recently died from influenza. That would be Holt Ferrier, a former cowboy who performs for the Medici Brothers Circus, and who has now found his entire life tossed upside down. He reunited with his children Milly and Joe, while also asking the head of the circus, Max Medici, to give him a new job since he can’t really ride and lasso anymore. And, the only job Max has for him is to become the new caretaker of the elephants. Times are tough for the Medici Brothers Circus, but Max has just purchased a pregnant elephant that he believes will become a huge draw when the baby is born. However, when the elephant, Mrs. Jumbo, does give birth they find that the calf isn’t what they expected. Because this baby has absurdly large ears, to the point that Medici is convinced no one will ever take it seriously. But, they’ve already sold a lot of tickets, so they decide to just hide his ears in a baby bonnet. Unfortunately, during the first show the baby is drawn to a woman’s hat, and ends up sneezing from the feathers, revealing his massive ears and earning mockery from the crowd and the new name Dumbo. And, sensing her baby’s embarrassment, Mrs. Jumbo charges into the ring and attempts to defend her baby, earning her the reputation of being a mad elephant. So, making a financial decision, Medici decides to sell Mrs. Jumbo, while looking for something to do with Dumbo. And, while trying to cheer the depressed Dumbo up, Milly and Joe make a startling discovery. If he has a feather Dumbo can use his massive ears to fly.

Ferrier doesn’t believe the children, but after a disastrous attempt to make Dumbo part of the clown show, Dumbo reveals his true ability and flies in front of a bewildered crowd. And, one of the people in attendance is able to catch a photo of the flying elephant, sparking a massive fascination with the elephant. And, eventually, the news of a flying elephant reaches New York and the owner of a massive amusement park, V. A. Vandevere. He travels to the Medici Brothers Circus to make a deal with Max, offering to hire everyone in the circus to come work for him in his Dreamland, with Dumbo as the star. Max agrees, and the entire circus travels to Dreamland, a technological marvel that’s missing a real attraction. But, with Dumbo’s help, Vandevere hopes to get a new show up and running with Collette Marchant, a famed trapeze artist. And, Dumbo does okay. He starts learning how to fly more consistently, and with Collette on his back, and they get ready for his big unveiling. Unfortunately, it turns out that Vandevere has also bought Mrs. Jumbo, and when Dumbo recognizes her calls he abandons his show to go be with her. Which, is a problem for Vandevere. So, he decides to have Mrs. Jumbo killed. As well as fire all of Max’s crew. So, they all decide to band together, along with Collette who has started to fall for Ferrier, and they plan a heist. During Dumbo’s next show they manage to free Mrs. Jumbo, and escape Dreamland, causing a chain reaction that ends with Dreamland burning to the ground. But, the elephants are free, and with the circus’ help the pair are sent back to the jungle to be with their own kind, while they start the Medici Family Circus, seeking to be a different and kinder sort of circus.

This movie seemed incredibly ill-advised from the get-go. The idea of remaking Dumbo, a 64-minute movie that barely has enough plot for an hour, seemed like a strange call to begin with. They’d have to add a whole lot, or virtually start from scratch to make a film of any real substance. Which, is what they ended up doing. But, an even weirder decision was to hand this film to Tim Burton. Now, I feel like I’ve crapped on Burton a lot on this site, which mostly stems from his largely terrible recent output. But, thanks to the recent Black Check Podcast miniseries on him, I’ve come to terms with the fact that I really do love a lot of Burton’s older films. But, it’s become abundantly clear that he has run out of passion, and no longer has anything personal to say with his films, leading to their increasingly diminishing quality. And, the idea that Dumbo of all things would be the spark he needed seemed unlikely. And, it turns out that that was correct. Because Dumbo is kind of a mess. And, it’s kind of hard to point the finger at any one aspect of the film, other than the lackluster script and the general idea of the film at large. None of the acting is particularly inspired or invested, the effects are fine but nothing special, and the film just generally seems to be treading water for the entire run-time. Which, probably makes sense when you see them trying to adapt Dumbo into a two-hour film. There are some occasional good ideas, the production design is generally great, and Michael Keaton is putting in a fascinating performance as the villain, but by and large it’s the kind of movie you forget as soon as you leave the theater. There was just no emotional investment, and there’s no wonder to be found, despite the fact that that’s kind of everything the movie attempts to be about.

Because, in an incredibly hypocritical turn of events, Dumbo ends up being a movie warning of the dangers of selling out. It’s a story about a group of starving artists who discover something wonderful, partner with a large corporation, and then are bit in the ass for that decision. Which is awfully rich coming from a movie made by Disney, a corporation which is increasingly devouring and destroying the film industry. And that’s a shame, because I feel like if this movie was somehow divorced from the Disney baggage, and came from a different studio, the message would be interesting. Because, at its heart, it’s a movie about the ways that corporations and capitalism at large find something truly special and wonderful in the world, and ruin it by forcing it into a model that will become most fiscally profitable. And, that’s something that is increasingly becoming a problem. We live in a world where people are expected to hustle for every dollar, to the point where people are basically expected to find a way to monetize their hobbies and passions, which can easily take the joy out of it. Dumbo, and the experience of seeing him fly, is a miraculous thing. It’s a special thing, and it gives a person true wonder to witness it. So, it’s a shame when he’s carted off to Dreamland and forced to become as profitable as possible. Which, maybe could have been more poignant if it didn’t come from a company that bought every fairy tale and fable and has found new and exciting ways to package and sell it to your for almost a hundred years.