It can sometimes be frustrating working my way through this project, because there are certain directors who just keep getting the sort end of the stick. It felt like I spend a huge portion of this list alternating between Hitchcock and Wilder movies, while potentially meaning that I never got to talk about directors I really do like, but whose movies just kept getting outclassed. One such director, who as I’ve been building this list I was shocked to realize almost go completely shut out, was Martin Scorsese. I really love Martin Scorsese, but as luck would have it, every time one of his movies that I love was released, it happened to be in a year where there was some other movie that I loved even more. But, thankfully, I get to talk about a Scorsese movie, which also happens to be my favorite Scorsese of all time, which may be a slightly strange pick. Both in terms of Scorsese’s larger filmography, and in terms of the King of Comedy being my favorite movie of 1982. Because, looking at the other films released in this year, and my recent choices for films to be highlighted in Cinematic Century, you’d probably think that I’d go with something else. Because 1982 was weirdly a banner year for genre movies. I’ve never been a big fan of it, but perennial sci-fi favorite Blade Runner was released this year, which could have raised the incredibly difficult question of which cut I’d be referring to as my favorite movie, if any of them actually could keep my interest. We also got a very strange double feature of alien movies that couldn’t possibly be more different in the form of John Carpenter’s the Thing and Steven Spielberg’s E.T., two movies I love wholeheartedly, and that probably would have won in any other year they could have come out in. Likewise, the mysteriously directed Poltergeist is a movie that I really like, and could have made for a great dive. Or, hey, we could have gotten all cyberpunk and dove into Tron, one of the most endearingly goofy films ever made. And, speaking of endearing and goofy, Conan the Barbarian came out in 1982, and it ruled. But, despite all that high quality genre content, some of which are my favorite movies of the 1980’s, I couldn’t deny that I had to talk about one of Martin Scorsese’s oddest and most cynical films.

In 1980 Martin Scorsese released Raging Bull, his most successful film to date, and he found himself completely burnt out on film-making. He was considering giving up narrative films, but still had a few dream projects rattling around in his head, so he decided to keep working in narrative, and approached his friend Robert De Niro to discuss their next collaboration. And, De Niro had an idea. He wanted to try something a little more comedic, and had come across a script by Paul D Zimmerman that pulled from the world of autograph seekers and celebrity stalkers that had caught his attention. Scorsese was a little unsure about making the film, but after the vast creative drain that Raging Bull had been, he seemed eager to make something a little more low key. So, while the hunt began to find an actor with the proper gravitas to play the talk-show host in the script, Robert De Niro threw himself fully into preparing for the role of obsessed stalker Rupert Pupkin. De Niro began studying stand up comedy in order to bring Rupert to life. He also apparently spent time with his own stalker, trying to fully understand the mindset of someone who fixates their entire life on a celebrity they’ve never met. And, after racing through basically every member of the Rat Pack, Jerry Lewis was finally picked as the talk-show host, meaning they were able to mine from his own experiences with a lifetime of fame. And, it all came together to create a very odd movie that, like so many other films I cover on this project, didn’t find its audience. The film was generally a critical hit, but was a massive bomb financially, most people finding it too cynical and distasteful. But, as time has gone on the film has been reevaluated, and is met with far greater appreciation. And, while it’s certainly not a very common opinion, it’s my favorite Scorsese film. 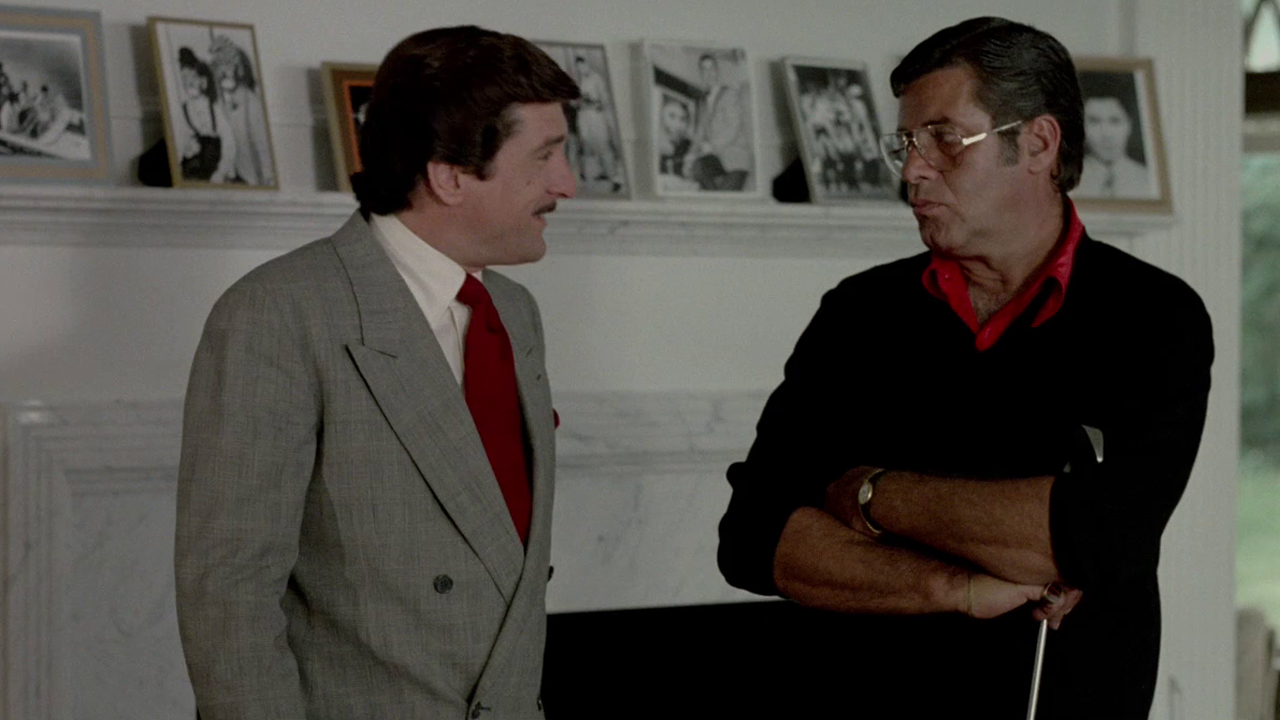 The King of Comedy is the story of Rupert Pupkin, a delusional man living in New York, in his mother’s basement, spending almost all of this time planning a meteoric rise of celebrity. Pupkin has decided that he’s going to become a famous stand-up comedian, and envisions that the first step to that plan would be to perform live on the late-night talk-show hosted by famous comedian Jerry Langford. Pupkin doesn’t actually perform, and has never done comedy live, but is convinced that if he’s given the chance to perform on Langford’s show he would instantly become the new King of Comedy, the greatest comedian in the entire world. Which means that he’s going to have to find some way onto the show. And this primarily takes the form on him lurking outside of Langford’s studio with other stalkers, including an acquaintance named Masha, hoping to get a moment alone with Langford. And, finally, he does just that. Pupkin ends up inside of Langford’s limo, and because he cut himself trying to push other people away, Langford feels sorry for him and humors him, telling him that if Pupkin were to call someone in his organization they could see about auditioning him.
Which, in Pupkin’s mind, means that he’s been guaranteed a slot on Langford’s show, and has become Langford’s new best friend. He goes to celebrate at a bar, attempting to woo a woman we went to high school with named Rita, insisting that he’s about to become a big deal. And, the next morning Pupkin arrives in Langford’s office, demanding to see the man. The staff at Langford’s office are generally put off by Pupkin, and do their best to humor him, telling him that they need a tape of his set to assess if he’s good enough to be on the show. So, Pupkin heads home to his basement, full of cardboard cutouts of celebrities that he routinely falls into fantasies with, and records his jokes. Pupkin drops off the tape, and instantly begins building a fantasy where Langford hears the tape, loves it, puts Pupkin on the show, and he becomes massively famous, while also becoming Langford’s best friend. And, so wrapped up in that fantasy, Pupkin decides that he’s been invited to Langford’s country home for a party. So, inviting Rita, the two head to Langford’s home, completely uninvited, and end up being confronted by the comedian. He’s horrifed that Pupkin has invaded his personal space like this, and demands the man leave, but not before telling him that his set was terrible, and that he’d never make it in comedy.

And, facing that rejection, Pupkin decides to do the only logical thing. He and Langford’s stalker Masha concoct a plan to kidnap him. The two are able to abduct Langford from his apartment, and bring him back to Masha’s home where he’s tied up and ransomed back to his network. But, not for money. Pupkin has Langford tell the studio that he’ll only be released safely if his kidnapper, who will only be known as King, is allowed to perform a set on his show. And, after seeking help from the FBI, the studio decides to go through with it, and Pupkin heads out to have his guest spot on the show. Langford meanwhile is left tied up and forced to engage in a psycho-sexual with Masha, until he’s finally able to escape her clutches and flee. But, he’s unable to stop Pupkin from performing. He reaches the studio, announces himself as the King, and is allowed to perform under the understanding that he’ll be immediately arrested by the FBI. Rupert then performs his long-simmering set, and actually does pretty well. People enjoy it, and the next day when the truth about his strange appearance on the show is revealed, he becomes a public sensation. Rupert is arrested by the FBI and sent to prison, but in a possibly delusional coda we learn that Pupkin releases a tell-all memoir from inside prison, leading him to be released to fame and fortune several years later. But, there’s no way to knowing if this is the truth or just another fantasy concocted by Pupkin.

Martin Scorsese is quite adept at showing the uglier side of the human experience. He’s most linked with his crime films, telling the stories of criminals rising and falling, full of depravity and deviance. He’s also told stories of murder, torture, child prostitution, and all manner of unpleasant things. But, strangely enough, this is the film of his that becomes the most upsetting to watch. And, that’s one of the reasons that I enjoy it so much. The King of Comedy is a hard movie, but not in the way that Scorsese is so famous for creating. It doesn’t feature any gory violence or anything, but it’s nevertheless an incredibly unsettling film, almost entirely thanks to the tremendous performance from Robert De Niro. He brings Rupert Pupkin to vivid and uncomfortable life, a man so completely disconnected from reality that he has conversations with cardboard, lets himself into strangers homes, and ends up kidnapping someone to advance his perceived career. And, De Niro is able to make everything Pupkin does completely believable, creating one of the more upsetting characters in cinematic history. And, when you also consider the fact that De Niro and Lewis were lifting from their own experiences with fame, and that people like Pupkin undoubtedly exist, it becomes that much more unsettling.

Because Rupert Pupkin isn’t really a fantasy. I’m not sure how recognizable Rupert Pupkin was in 1982, if this sort of fanatical and obsessive fan was really that common of an experience. But, in 2019, Rupert Pupkin is incredibly recognizable. He’s a man who wants to be famous more than anything, who thinks that interactions he’s had with celebrities in passing (or in his own head) are the same as real human connections, and he expects everyone to just bow down to his perceived greatness, all with a smiling obliviousness to reality. There are a million Rupert Pupkins on Twitter at this moment, being overly familiar with celebrities they obsess over, and dreaming of becoming famous. Not for anything either, just famous. It’s incredibly damning that Rupert Pupkin spends all of his time fantasizing about fame, not comedy. He doesn’t sit around dreaming up new material, he sits around dreaming about being on talk-shows, having famous friends, and being beloved. Stand-up comedy is just a path to get there, at least in his head. Rupert Pupkin has no real passion or drive, he just thinks that he deserves to be loved, and will do anything in his power to do that, social structures be damned. We have no real idea if the end of this film is real or not, but the sad thing is that if this story were taking place in modern day, it almost certainly would be real. If a person like Pupkin, clearly mentally unwell, kidnapped Jimmy Fallon and performed on the Tonight Show he’d become an instant celebrity, a viral sensation that no one would be able to stop talking about. Because, like so many satires, reality has caught up with the King of Comedy, and the Rupert Pupkins of the world have been given more and more chances to become King for a night.

The King of Comedy was written by Paul D Zimmerman, directed by Martin Scorsese, and released by 20th Century Fox, 1982.