The Simpsons is a very cyclical show, often setting up recurring episode premises that would end up coming around just about every season. And, for a long time, one of the weirder recurring story-types were episodes revolving specifically around Itchy & Scratchy. It took a litany of forms, but for several seasons it was guaranteed that there was going to be an episode that would test my typing skills, because I’m for some reason incapable to typing Scratchy. But, lately that trend has fallen off. No more, however. And, to make matters even stranger, Itchy & Scratchy don’t really play that big a role. Let’s do this thing.

The episode begins with some sort of Krusty convention going on in the Springfield event center, and Bart and Lisa have dragged the rest of the family to attend with them. They’s specifically at a panel featuring the insight of Krusty, Mr. Teeny, Tina Ballerina, and a producer on the show who refuses to speak. They take some questions from the audience, and show them some gag reels featuring such highlights as Krusty exposing himself, Krusty being beaten by mobsters, and Krusty crushing Sideshow Mel’s spine with a bit of the set.

After all of this though, Krusty announces that he has a pretty big change coming to the show. Based on market research and proof that boys are quickly switching to video games as their primary source of entertainment, Krusty has decided that Itchy & Scratchy are going to be rebooted as women. And, while Lisa finds this a little odd but generally awesome, Bart and all the boys in the audience are horrified.

Bart and the boys begin spouting the same ignorant talking-points, talking about how much canon matters and that women can’t realistically be cartoon mice. Krusty doesn’t really care about any of this, since he’s only doing this for the pandering, but Bart is able to whip up his friends into a fury, and convinces them that they shouldn’t even hate-watch the show, they should protest it.

So, Bart invites over a bunch of the other boys to his house for the first episode of Krusty’s show to feature the new cartoon so that they can specifically turn their TV off as soon as it starts. And, weirdly, they’re all super psyched about it, very eager to make this petty little demonstration that no one will even know happened.

Meanwhile, Lisa is upstairs in her room, stoked to see female Itchy & Scratchy. She’s even setting up her phone to film her reactions to the episode. And, when it begins, it just seems like Itchy & Scratchy. It’s still gory, and I think it’s referencing Pitch Perfect, but otherwise it’s the same show that they love. In fact, Bart happened to be walking by while all of his buddies were downstairs protesting, and he ends up laughing a whole bunch at the joke.

Bart won’t admit that he thought it was funny though, and storms back downstairs to be with his friends, happy that they were able to pre-judge something without giving it a chance first. And, this obviously disgusts Lisa. Luckily though, she realizes that her phone caught proof of Bart laughing at the cartoon. So, she uploads the video to the internet, and it promptly becomes viral, because apparently people love seeing little boys be hypocrites.

And, it doesn’t go well for Bart. Everyone knows that he liked this cartoon with girls in it, and his social standing immediately plummets. The other boys at school start giving him shit, but Bart ends up standing up to them, and insists that the show was actually funny. But, weirdly, Milhouse finds himself placed as the head of this group of boys, insistent that girls are terrible, that they keep taking everything from boy culture, and that Bart is now some sort of gender traitor. Which means he needs to be beat up.

Bart runs away, and ends up hiding inside of a girl’s bathroom to avoid a beating. And, inside he comes across a trio of sixth grade girls, Carmen, Erica, and Piper. And they are not happy to see Bart. They start bullying him immediately, and only stop when Bart notices that they have spray paint with them and he outs himself as El Barto. And, because he’s quite prolific, they decide that this proves he’s legit, and they even let him in on a prank they have planned to flood Skinner’s office with pink paint.

This prank goes swimmingly, and Bart is even invited to their hideout, a seemingly abandoned old Home Ec room. They then explain that, in their eyes, what they do isn’t pranking, it’s feminist protest. And, in order to stand by their claims of gender equality, they allow Bart to become the latest member of Bossy Riot, their little gang. And, at the same time, we learn that Milhouse has radicalized the other boys to begin a Boy’s Rights Association.

Bart starts hanging out with the girls all the time, pulling all sorts of pranks that fight back against the patriarchy. And, apparently thanks to having a fourth member, Bossy Riot end up becoming so prolific that their pranks become local news. And, they gain a huge fan in Lisa. But, as she makes that known she also begins to suspect that Bart is also a member, which threatens to destroy her understanding of the universe.

She confronts Bart, and he freely admits that he’s in Bossy Riot, even though he doesn’t care about feminism. He does invite her to come with him to the latest Bossy Riot meeting, but Lisa is too timid, and Bart goes himself to hear about their latest prank. Apparently Krusty has caved to Milhouse’s gang, and is going to be switching back to male Itchy & Scratchy cartoons. Bossy Riot thinks that that’s a cop-out, so they have a plan to destroy all the old tapes of classic Itchy & Scratchy as revenge.

Which, is a bridge too far for Bart. He tries to stand up to the girls, and they promptly beat him up so they can go destroy the tapes. Luckily though, Lisa had a change of heart and has arrived to find Bart tied up shortly after the girls left. Bart tells Lisa what they’re planning, and she agrees to help him. They race to the Krusty studios and find that Bossy Riot are planning on destroying the original tapes on live TV, dumping them into a vat of nail polish remover.

Bart and Lisa arrive just in time, and Lisa is able to save the day, kicking over the vat before the tapes can be destroyed. And, this ends up working out for Bossy Riot, because the fumes from the spilled chemicals cause all the Boy’s Rights Activists to start crying on TV, showing themselves to be petulant little children. The Bossy Riot girls then manage to escape, and promptly kick Bart out of their gang. They do invite Lisa to join them though, and she decides to play it dangerously, and agrees to go cause some feminist havoc. 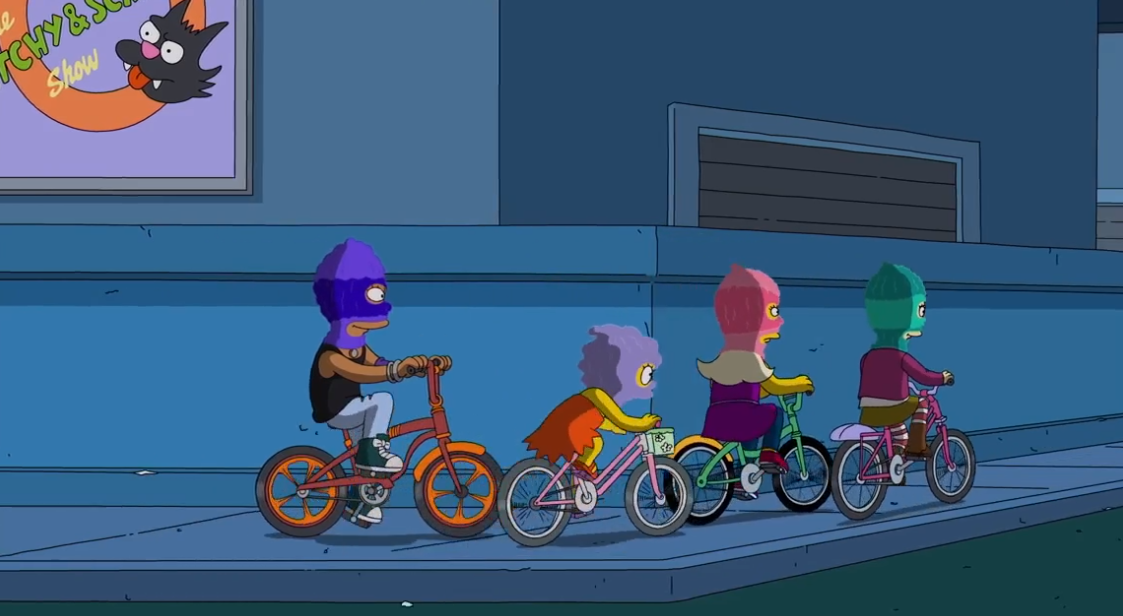 This episode, while a little scatterbrained, works pretty well. Especially in relation to the other episodes we’ve had lately, which have been by and large terrible. This one is at least funny and appears to have been written by someone with knowledge of current culture. Which, makes sense, since this is the first episode written by the tremendously funny Megan Amram, breathing some much needed life into this stale season. It’s just a shame that there’s a little too much going on in the episode. I love the idea of Bart accidentally joining a bunch of feminist pranksters, him being more in it for the pranking than the politics, I just wish that he kind of ended up being more involved with the feminism. This could have been a great episode to have Bart actually learn something, but instead it all gets bogged down in the Itchy and Scratchy stuff. Which, is weirdly also a good storyline. I love the show taking down the idiot men who feel constantly attacked by the idea of fiction involving women, because they’re obviously ridiculous. So, having a story about the boys of Springfield becoming these sort of trolls is a great one. I just kind of wish that this had been two episodes, each given their own time to flesh out. But, I guess I can’t knock the episode for not being what I wanted it to be, and wishing that there was more to it is certainly not the worst complaint I can have about an episode. Especially in context to the sort of drek we’ve been dealing with lately.

Take Away: Don’t be a men’s rights loser.

“Bart vs. Itchy & Scratchy” was written by Megan Amram and directed by Chris Clements, 2019. 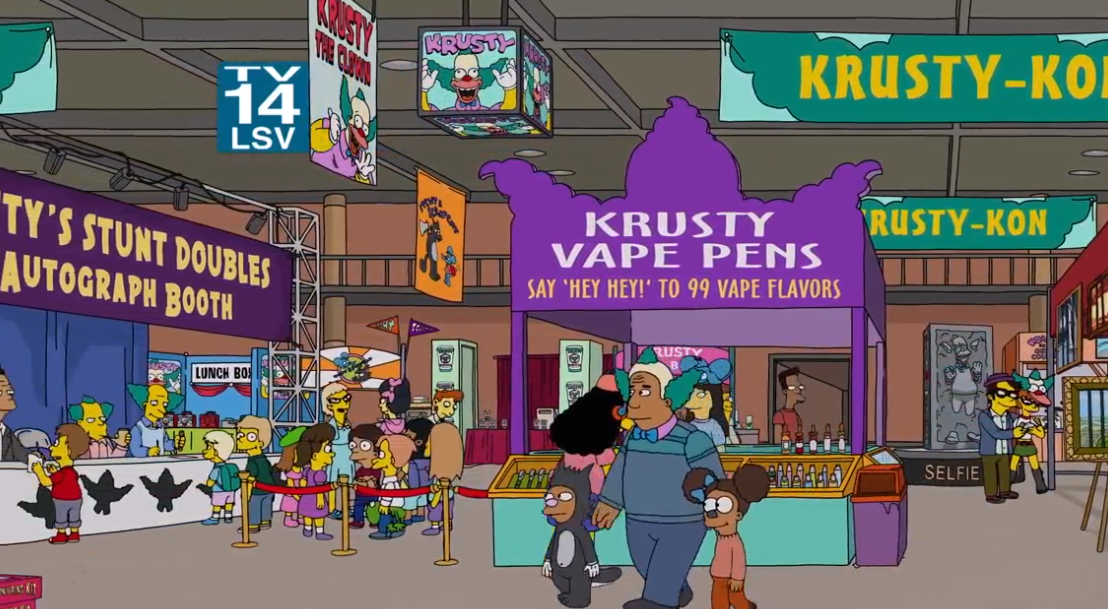 Tagged as: 2019, Bart vs ITchy & Scratchy, Lifetime of Simpsons, Season 30, the Simpsons