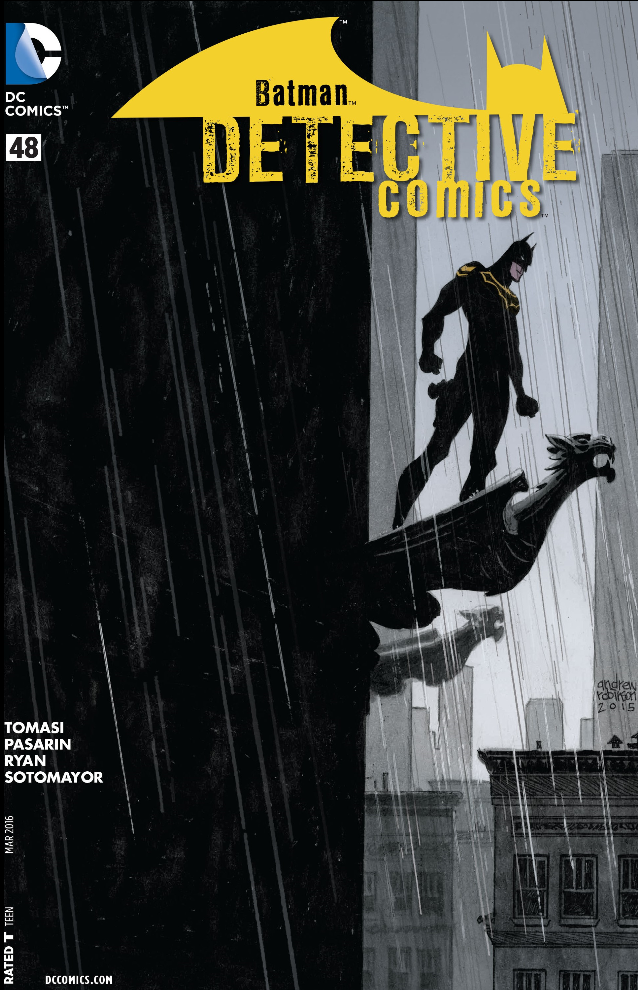 Hi there everyone, and welcome back to yet another installment of Bat Signal, my never-ending quest to read every issue of Detective Comics, in random order, and with essentially no context. And, after a week off I’m getting back into the swing of things with one of the oddest issues that I’ve ever covered during this project. This isn’t the first time that we’ve tackled and issue from the New 52, that brief period when DC Comics rebooted everything and for the most part it all got substantially worse, but this is the first time I’ve talked about a story from an even briefer period when Bruce Wayne wasn’t Batman. Commissioner Gordon was. See, in the pages of Batman, one of the only New 52 books I legitimately liked, Bruce Wayne seemingly died while having a climactic fight with the Joker, and as a result Jim Gordon started working with Alfred’s daughter an an elite group of police officers to keep Batman’s memory alive, while getting Jim super jacked and using a weird robot costume. It was nuts. And, to my surprise, Gordon-Batman actually did show up in Detective Comics as well, including this issue. So, buckle up folks, it’s going to get weird.

The issue begins, after an introductory page of a shadowy man methodically loading a flintlock pistol while quoting George Washington to himself, with Jim Gordon doing nightly patrols in Gotham City. Which takes the form of him voyeuristically leering into people’s windows while he races along the rooftops, looking for crimes to fight. He’s not in the weird vaguely rabbit-like mech-suit he usually wore as Batman, instead opting for the more sleek costume, and after watching a father and daughter bonding in an apartment, he decides to call up his own daughter. Which leads to a silly scene where both Jim and Barbara chat while simultaneously trying to keep their separate secret identities still secret, neither of them admitting that they’re actually dressed up as bats and fighting crime. And, after enough father/daughter time, Jim hangs up just in time to hear a very peculiar sounding gunshot. He races off after the source of the shot, and ends up finding a corpse in an alley. And, it’s a pretty peculiar corpse. It seems to be dressed as George Washington. 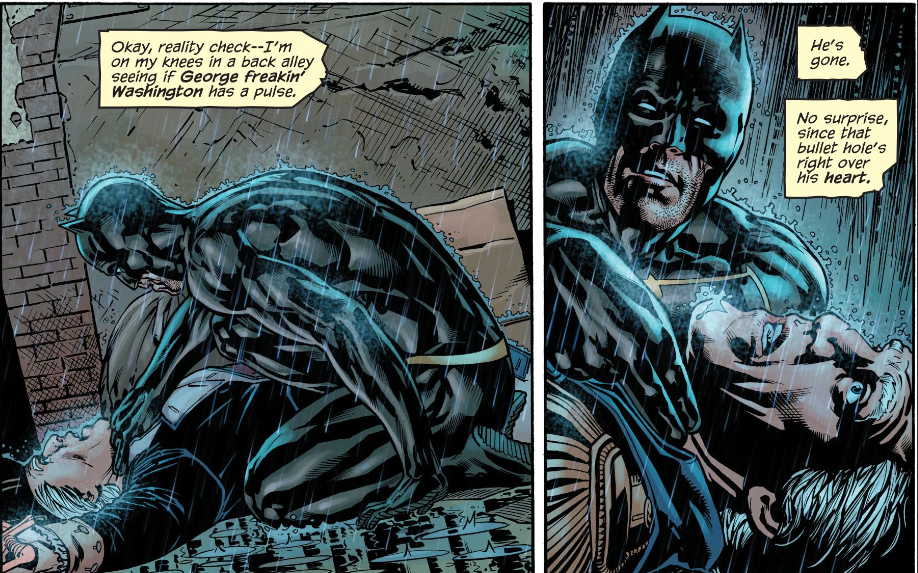 Jim starts investigating the corpse, getting pretty drawn into how strange it is to find the body of the first president of the United States in a dingy Gotham alley. He gets so engrossed in fact that he doesn’t even realize that the murderer is still in the alley, and just so happens to be taking a bead on Jim’s head with a flintlock. The killer fires the shot into Jim’s head, which is stopped by his advanced Batsuit. It still jostles him pretty hard though, and he only has time to shoot off a few Batarangs with a weird little Batarang gun he keeps, before falling on to the ground. The killer flees into the night as Jim makes an emergency call to his support crew, who arrive in their Batman dirigible to airlift him out of there.

Alfred’s daughter Julia rescues Jim and brings him back into the dirigible where they make sure that he’s okay. The suit really did take the brunt of the damage, and Jim just has to get his wits back from the head trauma he suffered, while also fretting about the fact that the killer got away. And, as we the reader see, the killer is clearly not ready to stop. He ends up returning to his base of operations, which is in an abandoned cemetery. The killer enters his sanctum and we find that he’s still quoting George Washington, while wearing a Washington mask. But, after he pries the one Batarang that did hit him out of his shoulder, he takes the mask off and sets it back onto a massive wall of celebrity faces. He then starts quoting astronaut Alan Shepard to himself while he approaches a bound and gagged man, preparing him for some new nefarious purpose. Meanwhile, Jim has returned to GCPD headquarters with the corpse of the other fake George Washington, and is ready to debrief with Harvey Bullock. It turns out that the murder victim is a hero fire-fighter with no criminal record, and no real clue as to why he’s been murdered while dressed up as George Washington. And, it wasn’t a cheap costume either. Both Bullock and Jim note that it has an extraordinary amount of detail to it, showing just how much work with into dressing this murdered man up like a president. Also, for some reason, his thigh bone has been surgically removed from his body, which they have absolutely no clues about.

It’s all incredibly strange, and as an added little bonus bit of weirdness, they find that the murdered man was shot with a lead bullet from the flintlock, but Gordon had been shot by a rubber pellet, meaning the killer never intended to murder Batman, cowl or not. And, while tossing around some theories with Harvey, Jim gets a page from his team that he’s needed at Wayne Tower where there appears to be a dead body tangled in a weather balloon. So, pulling a classic Batman, Jim runs away while Harvey is in the middle of a sentence, and gets to the roof in time to be picked up by his dirigible. They then fly to Wayne Tower where they’re met with the site of an astronaut, dead, and tied to a spire on the building, setting up a second historical figure murder. What a weird little issue. I mean, the whole “Commissioner Gordon shaves his hair into a mohawk, gets ripped and becomes fake Batman” plot is weird, and I’m so glad we finally got a chance to talk about it even if we didn’t get to see his ridiculous robot, but this issue was very strange on top of all of that. And, it’s strange in a way that I found surprisingly captivating. It is written by Peter Tomasi, whose work on Batman’s various books I generally like, but by and large I didn’t like the New 52’s Detective Comics, so I never had much interest in them. But, a killer who is apparently dressing up as historical figures, dressing his victims up as the same figures, and then killing them with period appropriate means? That’s fantastic. I have no idea what this guy’s deal is, and I genuinely would like to read more of these issues to figure it out. It’s kind of a shame that it’s all couched in the weird Gordon stuff, but that’s okay. At least it wasn’t Azreal.

“The Bronze Age – Blood of Heroes” was written by Peter Tomasi, penciling by Fernando Pasarin, inked by Matt Ryan, colored by Chris Sotomayor, lettered  by Wes Abbott, and edited by Mark Doyle and Rebecca Taylor, 2016. 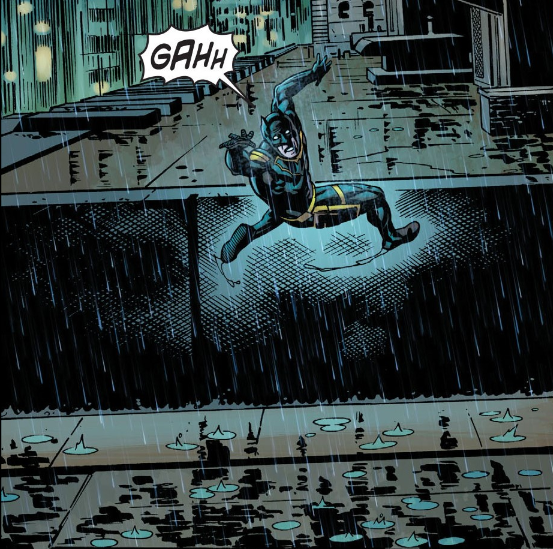