Yesterday we got to talk about an episode of the Simpsons that was just kind of disappointing. It just wasn’t really anything special, and just felt a little tired. And, I was hoping that things might have turned around for today’s episode. Nope! It’s a been a while since we’ve had an episode I’ve actively disliked like this one. I mean, it takes a lot for me to root against Lisa on this show, but this episode got me there. Buckle up, folks.

The episode begins with the family sitting around on a rainy day playing board games, even including Patty and Selma. And, weirdly, everyone’s in a great mood. They’re having a perfectly lovely time and nobody is mad at each other, which causes them all to become suspicious. But, Lisa figures out the one element that seems to be missing. Bart isn’t there.

And, Homer has an explanation for that. Apparently he was tasked with punishing Bart after he got the family banned from a buffet place for taking too much soft-serve, and that punishment has taken up a lot of Bart’s time. Oh, did I say punishment? Sorry, that’s not right, because what Homer actually did was buy Bart a top of the line gaming computer, and Bart has become a hardcore gamer, meaning he hasn’t had time to be around the family.

So, that’s weird, right? And, it doesn’t stop there. Bart’s on what appears to be a desktop computer from at least ten years ago, he’s playing some sort of League of Legends ripoff which is incredibly topical, and he’s growing a mustache apparently. It’s all incredibly weird, but what gets weirder is that no one but Lisa finds this a weird choice Homer made. Marge is cool with it, Homer thinks he’s a genius, and Lisa gets to complain that Bart benefited from acting poorly, and threatens to start acting out herself in order to get a present. Which, makes sense! Unfortunately for her, she’s terrible at misbehaving, and that just fizzles out immediately.

Homer is thrilled to have Bart out of his hair, but quickly becomes annoyed with just how much time Bart’s spending playing this game, and tries to put a stop to it. Until Bart explains that he and his team (comprised of Milhouse, Nelson, Martin, and Krusty’s daughter Sophie) are actually really great, and are about to compete in a tournament with a $1,000 cash prize. And, just like that, Homer decides to fully support Bart and his new esports career, even though he can’t quite understand why people could possibly make money doing this.

So, Homer goes with Bart and his team while they compete at the Elementary School for some reason, and watches as they easily win the prize. They each get $200, and it’s clear that Bart sees this as just the beginning, and wants them to get even better. Homer tells them that they should just give up while they’re ahead and enjoy their childhoods, until Bart explains that this win just qualified them to go to a larger tournament that’s prize is $500,000. And, just like that, Homer’s fully on board, and installs himself as the team’s new coach.

Homer knows that Marge won’t be too happy with Bart spending all his time playing video games, and manages to manipulate her into not caring by spoiling her with a Keurig machine, because this episode really feels like it was written ten years ago, and gets her on board. They then bring in some professional gamer to help coach the kids, giving them all the tips needed to become the best players in the entire world, and suck all the fun out of the game.

Unfortuantely, for no real reason, the professional gamer just suddenly loses his skills pretty quickly into his lessons and retires from gaming, leaving Homer as the coach once more. Which made all of that…pointless! But, it does lead Homer to start teaching the kids that they need to become obsessive and insane about this game, which certainly could set up a dark path for this episode to take.

But, it doesn’t. Marge is thrilled with how much time Homer’s spending with Bart, even though she does wish that he’d also be teaching him how to be a good person. Homer doesn’t care about that though, because he’s too busy worrying about getting glory through his son’s achievements. Which, causes him to have a very strange dream where he meets with the parents of famous athletes who sing him a song about how great it is torturing children into living our their parents dreams, just cementing the idea that Homer’s doing something great.

The next tournament then arrives, and thanks to Homer’s coaching, they’re able to win at the last second, becoming the best players of this game in North America. But, that just means that they’re now going to have to go to South Korea to participate in a global tournament! And, as Homer’s getting ready to take Bart and the team to South Korea, he notices that Lisa is depressed. 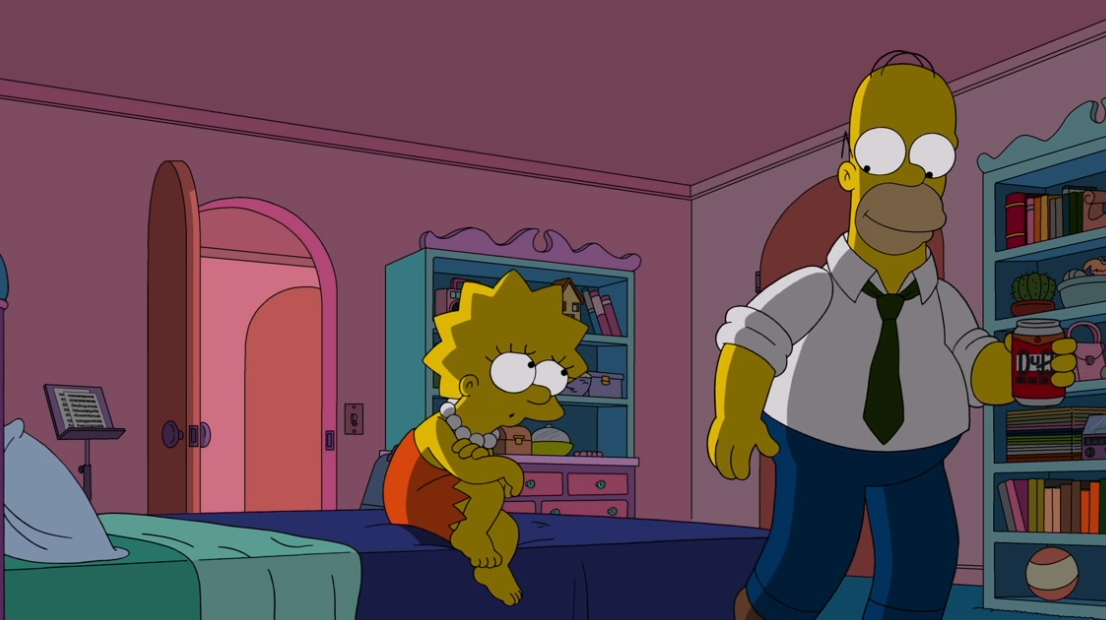 It turns out that she’s sad that Homer is spending so much time with Bart, and wants him to stop caring about the video games and focus on her. Homer doesn’t really care though, so Marge has to pick up the slack and parent Lisa, which is where this episode kind of goes off the rails. It turns out that Lisa has had a dream to go to South Korea to visit some famous monastery, and thinks that this is the only time she’ll ever have that chance, and ends up demanding that Marge let her come to South Korea as well, all while making it seem like she’s been some great victim of Bart’s new talent. And, Marge eventually relents.

So, the whole damn family ends up going to South Korea, where Bart and the team start preparing for their big game. But, as Homer is dealing with his stress and trying to coach the team, Lisa decides that he and Marge have to accompany her to that temple. He goes through with it, and they arrive to find that the whole idea of this place is that they make mandalas and drawing out of salt, and once you finish you destroy it to teach you about zen happiness. That’s the whole thing, and the reason Lisa had to come.

And, weirdly, Homer loves it. He finds an incredibly amount of inner peace by learning that destroying things you’ve worked hard to accomplish gives you a release. So, he takes that knowledge and goes to destroy Bart’s happiness. Because while they’ve been at this temple, the big game has begun, leaving Bart without his family to root him on.

And, as he and his team are about to win and become the world champions, Homer cuts the power to the building, getting satisfaction from destroying his perceived accomplishment, while throwing the tournament into chaos. But, that was apparently the happy ending? Because, while it seems that Bart spends the entire plane-flight back to America being  bullied by his team because his dad ruined their chance, Homer gets to gloat with Lisa about their newfound zen.

This episode is just kind of a mess. And, weirdly, there’s two completely separate aspects of it that simultaneously drag it down, which is kind of an impressive feat. On the one hand, I would be legitimately surprised to learn that this script wasn’t written in 2008. The episode seems to find the prospect of esports completely shocking, it features a League of Legends parody, it has Bart on a big bulky desktop computer, Marge is thrilled with a Keurig, and for an episode that revolves around video gaming it seems to have no knowledge of Twitch or YouTube streamers. It feel only tangentially aware of video games, and just generally felt like an episode that came from a time machine. Although, I can’t sit here and say that I’d rather Bart have become a big Twitch streamer, because I really don’t need to hear Bart Simpson use the N-word and become a white supremacist. But, aside from all of that, the real reason that this episode rubbed me the wrong way was Lisa. Now, I’m a huge fan of Lisa Simpson, and almost always find myself in her corner. But she’s just the worst in this episode! Bart actually has found something he’s good at, and is spending time with Homer as well. But, Lisa decides to destroy that…for no reason? She forces them to bring her along to South Korea just so she can make Marge and Homer do something that she doesn’t do herself, because it’s been a lifetime dream apparently. And, she then smugly watches as Homer ruins Bart’s chance at glory. Normally those two roles are reversed on this show, which is why I so often find myself disliking Bart. And it’s just a huge bummer to see Lisa act to out of character, be so unlikable, and then watch as the episode seems to tell us that she’s the hero of the story, I guess because video games are a colossal waste of time and it was absurd that Bart gained any satisfaction or self-esteem from them? I don’t know, folks. This episode is confounding.

Take Away: Maybe accept the fact that your parents are allowed to give your siblings attention as well? And, don’t live through your children.

“E My Sports” was written by Rob LaZebnik and directed by Rob Oliver, 2019.