Hi there everyone, and welcome back to yet another installment of Bat Signal, my ongoing quest to read every issue of Detective Comics, in random order, and with basically no context. We’re taking a trip back to the 1940’s this week, which means it’s time for some good old-fashioned Golden Age nonsense. Plus, I learned something! Because this issue uses the term “Steeplejack” a whole bunch, and I was somehow completely unaware of it. I guess it just means “person who scales tall buildings to do structural repair,” which you can easily pick up from context clues in this story, but hey, it’s always nice to learn something from America’s favorite source of education, Batman!

The issue begins by showing a group of steeplejacks almost falling off of a building while doing routine maintenance, and quickly realizing that this life absolutely sucks, and that they need to do something better with their life. Ominous! They work at a company called Skyline Steeplejack Co, which is owned by a war-hero named Bob Skelly, who seems completely nonplussed by his worker’s near death. But, he has something more than just potential employee death on his mind, because that day Batman and Robin arrive at the office to give him bad news. Apparently there’s been a rash of burglaries in Gotham, and the seem to be done using the scaffolding that Skyline Steeplejack uses. Skelly doesn’t know who might be doing these crimes, but does tell Batman that he’ll insist his men take apart the scaffolding every night so criminals can’t use it. And, as soon as he tells his men, the same ones involved in the accident earlier, they make it incredibly clear that they’re the criminals. Not really playing it cool.

The next day though, while Skelly is walking to work, he’s accosted by a random fortune teller who draws him into her store to tell him some bad news. She informs him that he’s going to die a horrible death involving heights, and very soon. And, sure enough, that night while he’s scaling a building with Red and Logan, the criminals, which he apparently does regularly, his line breaks and he almost falls off the building. He manages to catch a gargoyle, which is when Batman and Robin find him. Batman uses his grappling hook to swing around the building, grabbing Skelly and bringing him to safety, causing the man to be extremely rattled. He promises Batman he’s stay safe, and as Batman and Robin leave to continue looking for the Steeplejack criminals, Red and Logan plot his imminent demise.

Which takes the form of trying to drop a can of paint on his head. Well, they can’t all be winners. And after two near-misses, Skelly is thrown into a deep panic. He decides that he’s both cursed and a coward, which makes him decide he’s going to have to call off his engagement to his secretary, because she probably wouldn’t want to marry a coward. Although, she thinks that that’s ridiculous, so she decides to get in touch with Batman and ask for his help. He doesn’t really know what to do about Skelly, but does know that all signs point to these robberies being involved with Skelly’s company. And, he thinks it may be Red and Logan, the two most suspicious people on the planet, who are involved. And, it just so happens that the two men are working at a large office building, on a holiday, which makes Batman very suspicious. So, he and Robin race over there, and sure enough find Red and Logan robbing an office. Batman races into the office, ready to fight the men, and they prove to be surprisingly well-equipped in combat, and are able to knock Batman out. And, with that accomplished, they tie Batman to a chair, wrap steel cords around him, and come up with an insane plan to kill him. Basically, they’re going to hang him off of the scaffolding, and place a soldering iron into the rope holding his chair, so that when it heats up the rope will burn and Batman will plummet to his death. Which…is complicated. Plus, they’re just going to stand there and watch as the damn thing heats up. But, apparently they aren’t paying that much attention to Batman, because he’s able to activate the radio in his utility belt, and uses it to send a Morse Code message to Robin.

Robin understands the message, and goes racing out of the Batmobile and into the skyscraper, right as Skelly happens to be wandering by. He realizes that something must be happening to Batman, and follows him into the building, terrified that his newfound cowardice will doom them. Skelly hangs back while Robin charges right towards Red and Logan, causing them to shoot their gun at him. It narrowly misses Robin, instead striking a rope holding up some sort of hunk of stone. But, it does manage to knock Robin out, somehow, making Skelly realize it’s up to him. So, he throws aside his cowardice, gets onto a rope, and swings out to save Batman, much in the same way Batman saved him earlier. And, after being saved, Batman returns to the scaffolding to take down Red and Logan, and save Robin. Which, proves difficult, because Logan is threatening to toss the Boy Wonder off the building and to his death. Luckily though, the frayed rope holding the stone finally breaks, hitting the scaffolding in just the right way to flip Logan off the building, killing him. Batman saves Robin, they arrest Red, and Skelly finds that his bravery has returned, letting him marry his secretary! 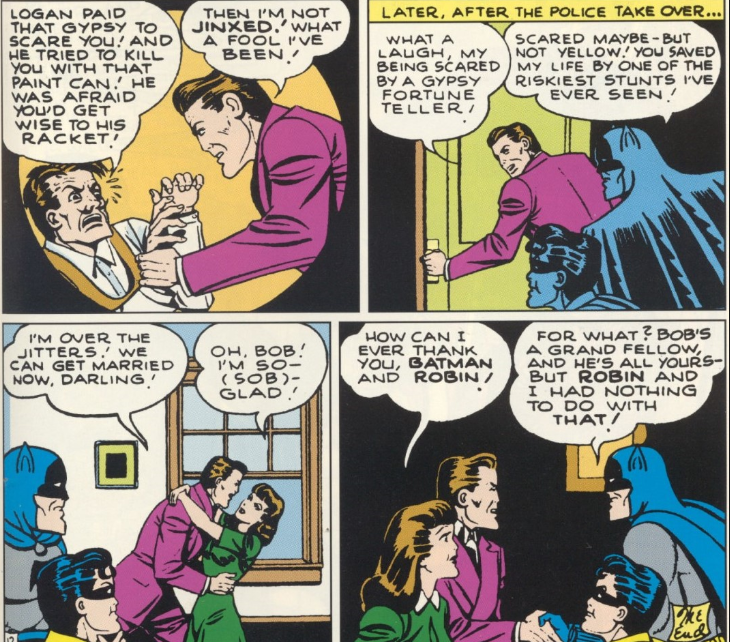 As a mystery, this isn’t exactly the greatest issue of Detective Comics I’ve ever read. From the literal first page you realize that Logan and Red are going to be the criminals, and throughout the issue they take pains to remind you of that fact. But, these stories aren’t often good sources of legitimate mystery. Instead, we’re given a really odd little story, which doesn’t actually feature a whole lot of Batman. This Skelly guy kind of becomes the protagonist of the story, and we follow him around until Batman finally takes center stage by confronting the villains. And, once that begins, the issue basically becomes a slapstick farce, something that I’d expect from Buster Keaton with people falling off buildings and being knocked to their doom. It’s not a particularly memorable issue, but it’s kind of a fun one. Plus it’s always nice to see Batman being integral in convincing two people to get married. That would be a hell of a story.

“Steeplejack’s Showdown” was written by Don Cameron, penciled by Paul Cooper, inked by Ray Burnley, and edited by Jack Schiff, 1946. 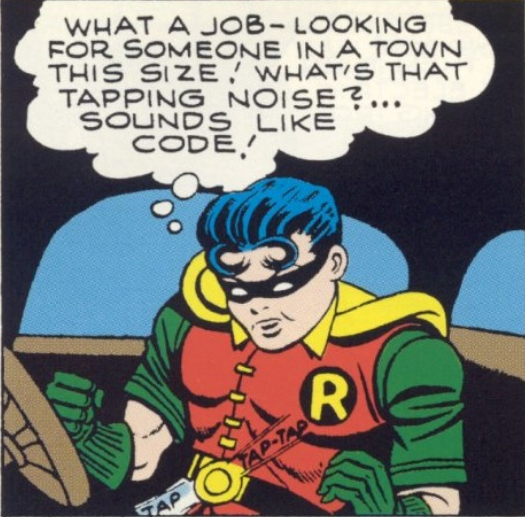