Fighting With My Family and the Appeal of Passion

Last week we got to talk about a corner of the world of pop culture that I don’t really connect with thanks to Alita: Battle Angel’s use of anime aesthetics. I was not a fan of that movie. And, this week we get to take another stab into a different world of pop culture that doesn’t do a whole lot for me. I’m not a wrestling guy. I was when I was a kid, didn’t really understand the gimmick of professional wrestling, and mainly just watched it to watch these insane larger than life characters fighting. I mean, when I was a kid there were guys who legitimately brought giant snakes into the ring, and wore insane colorful costumes and masks. It just seems a little more dull to me now, even though I know a lot of people who love comic books have flocked to the world of professional wrestling, recognizing that melodramatic and almost soap operatic quality that comics do so well. But, for whatever reason, it’s just not something that I find myself having any interest in. So, the idea of seeing a biopic about a professional wrestler probably wouldn’t have caught my attention. And yet, for perhaps the dumbest reason, I found myself drawn into checking out Fighting with My Family, a film that tells the tale of professional wrestler Saraya “Paige” Bevis. And, that reason was the fact that this movie was written and directed by Stephen Merchant, a comedian I enjoy quite a bit, and a person that I couldn’t have been more shocked about feeling passionate enough about Paige to make a film about her. The trailers looked charming, I knew nothing about Paige, and Merchant’s involvement was enough to get me interested enough to check it out. And, I’m glad I did. Because this was a surprisingly delightful little film.

Saraya Bevis’ story begins in Norwich, England, a working-class town where she lives with her wrestling obsessed family. Her father and mother, Rick and Julia, operate their own independent wrestling organization, while also running a wrestling gym that trains several kids from the neighborhood. Saraya and her brother Zak are inducted into the world of wrestling at a very young age, and they quickly build up an impressive amount of talent and drive. And, around the same time that Zak gets his girlfriend pregnant, they learn that both of them have been invited to an audition to join the WWE, the biggest professional wrestling organization in the world. They both head to the audition, and after getting some intimidating advice from Dwayne “The Rock” Johnson, and after Saraya develops her in-ring identity of Paige, they give it their all and audition for Hutch Morgan, a talent scout for the WWE. And, at the end, Paige gets an offer to come to Florida and join NXT, a subsidiary of the WWE. But not Zak. Saraya fights for her brother to come too, but the family convinces her to not throw away her shot, and she travels to Florida, alone, ready to start her dream job.

Saraya finds herself in a very different world, as she and a group of other newcomers begin training. They are placed into a gauntlet of physical feats, practice for their stage-patter and character work, and a whole onslaught of struggles to remind them that this is more than just a fun “fake” sport. And, almost immediately, Saraya starts to struggle against her fellow newcomers. None of the other women seem to know anything about wrestling, and she begins to develop a bit of a superiority complex, thinking that she’s better than all of them, before coming across some hard truths. After some more training and a few exhibition matches Saraya starts to realize that she’s not as physical fit, or apparently attractive, as her competition. This causes her to try to be someone she’s not, which just burns her further. So, she returns to England for Christmas, with every intention of giving up on her dream. But, after seeing how depressed and bitter Zak has become after being passed over, she starts to realize that she’s doing this for more than just herself, and she returns to America, ready to give it her all. She becomes a team-player, works on forming a new identity, and ends up getting moved into the WWE, becoming the youngest Divas champion in WWE history, and forging a new path for herself, while Zak devotes his life to training more kids, helping them chase their dreams. 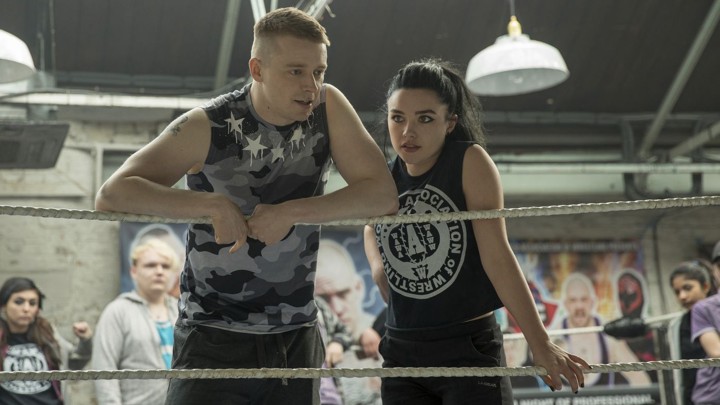 Like I said earlier, I wasn’t really sure what to expect with this movie. I don’t know much about wrestling, I knew nothing about Paige, and I kind of assumed that it was just going to fall into the same tried and true biopic format. And, it kind of did. The movie isn’t any sort of revelation. It didn’t charge into new ground, challenging the subgenre of biopics, and it didn’t really spark any interest for me to start watching wrestling. But, it’s still an incredibly charming story, performed with truly great and earnest performances, and while the story it was telling was a little familiar, it told it in a fun way. It’s just a charming film. And, I think the driving of that charm, and the main reason that the film worked as well as it did were the performances. I really don’t know what Paige is like in the WWE, but Florence Pugh portrayed her with incredible respect, giving us a character that it was impossible not to relate to. She’s just so earnest, and you quickly get drawn in by her quest. Nick Frost and Lena Headey were absolutely delightful as Saraya’s parents, just full of support and love, wishing nothing but the best for their daughter and helping her attain the dreams that they themselves were never able to reach. And, while it was impossible not to become frustrated by the pig-headed jealous that the character falls into through the whole film, Jack Lowden was really great as Zak, combining with Pugh’s performance to show us just how passionate these two people are, and how volatile that can make them.

I’m not a wrestling guy. But, I’m a huge sucker for stories about people who are chasing whatever it is they’re passionate about, recognizing the fact that there’s something in their life that they love so completely and thoroughly that they can’t imagine their life without it. And this film is absolutely checking that box for me. The sheer passion on display in this film, from the characters and the story to the clearly loving adaptation that Stephen Merchant and crew have accomplished makes it impossible not to be drawn into this film. Because even if the thing they’re being passionate about isn’t something that I personally connect with, I couldn’t help but become completely invested in this film. Everyone involved is so clearly in love with the material they’re working with, and the story itself is about people who have spent their entire lives striving towards one goal, so to see they accomplish that goal, and to see the film express that story in such a wonderful way is just pure catharsis. Not everyone is lucky enough to have a passion like this, and I’ve just become a huge mark for stories about people doing their jobs well, and fighting for their dream anyway they can, and this film delivers that feeling in spades.

Fighting with My Family was written and directed by Stephen Merchant, and released by United Artists Releasing, 2019.