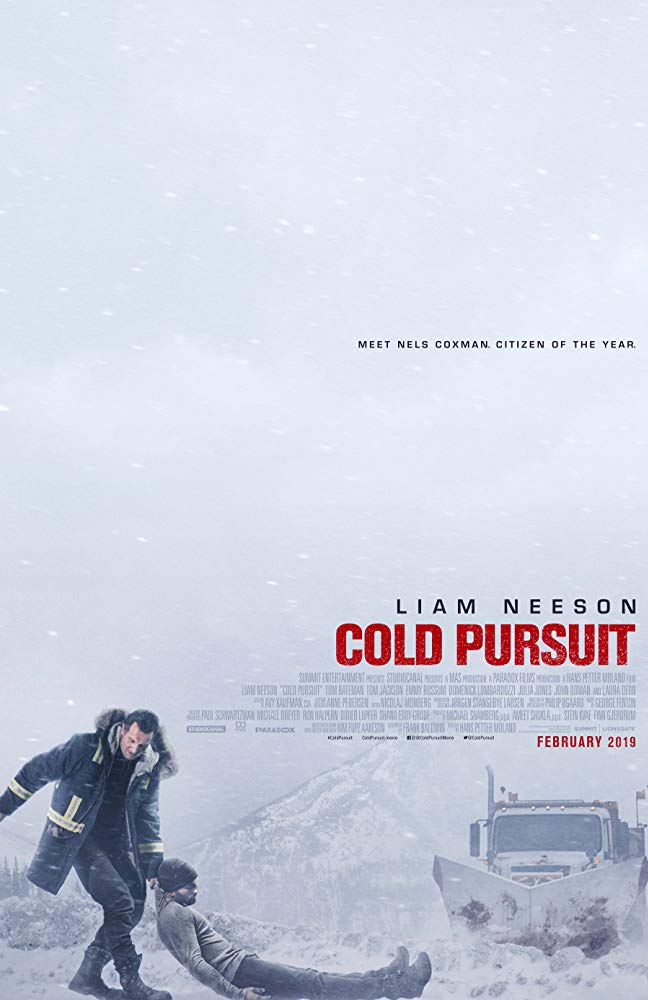 We live in a very tumultuous world, one where every day we’re barraged with an insane volume of noteworthy news stories, most of which end up getting forgotten in mere days. We learn all sorts of terrible things, get mad about them, and then promptly move on with out lives. But, that constant state of outrage can sometimes lead to some rather awkward situations. For instance, as I’m sure you’ve all learned and already forgotten, Liam Neeson got himself in quite a bit of trouble recently while marketing the movie we’re talking about today, Cold Pursuit. In case you hadn’t heard, Neeson decided to share some shockingly racist thoughts he had when he was younger, seemingly coming out of nowhere, and instantly throwing himself and this entire film into a mire of controversy. Which, made the fact that I already had tickets to Cold Pursuit kind of awkward when this news came out. It’s an incredibly strange situation, and it’s led to a lot of talk about internalized racism and the very nature of revenge narratives, and all of that has almost immediately out shined whatever success this movie could have possibly had, while completely dominating the discussion around it. I’m not the biggest fan of Neeson’s later career shift into weird revenge fantasies, but I’d actually heard some positive things about this film. Remade from a successful Norwegian film, from the same director no less, this movie promised to actually do something different with the standard formula Neeson has found himself in. But, it was hard to go into this film without any of the recent developments rattling around in your mind. Which is a shame, because this actually is kind of a weird and interesting movie.

Cold Pursuit tells the story of a stoic snow-plow driver named Nelson Coxman who operates in a remote ski-town called Kehoe, which is absurdly placed in the mountains of Colorado. This town receives staggering amounts of snowfall, making Coxman and his plow an integral part of the town’s society, making him one of the most respected figures in the town. But, his life is thrown into chaos when his son dies from an apparent heroin overdose. Coxman doesn’t believe that his son could ever have been wrapped up in something like heroin, and it turns out he’s right. His son was killed by a powerful Denver-based gang who were running heroin through a small airport in Kehoe, where Coxman’s son worked. He apparently found out about the drug-operation, objected, and was therefore eliminated. And this news throws Coxman into a rage. He decides that it’s going to be his mission to destroy the gang who killed his son, and begins trying to track them down. He gets a lead on a member of the gang, and slowly starts working his way up the chain, finding people and killing them, learning that the gang is run by a fastidious criminal named Trevor Calcote who goes by Viking. And, Coxman actually starts to make a lot of noise. He kills several men, and ends up losing the Viking a whole lot of cocaine and heroin, thus earning his ire. However, there’s a misunderstanding. Viking obviously doesn’t assume that a plow-driver from a ski-town is the one behind this sudden rash of murders, and makes the leap that it must be a rival gang of American Indians operating near Kehoe whom he and his family have had a truce with for decades. But, Viking decides that the leader of this rival gang, White Bull, must be declaring war, and decides to reciprocate by killing White Bull’s son, kicking a gang-war into gear.

Coxman doesn’t have any idea that this is happening though. He’s still focused on killing Viking, and has asked his brother, a former criminal himself, for some advice. His brother is actually familiar with Viking, and tells Coxman that he should bring in a hitman rather than try to kill such a connected person himself. Unfortunately, the hitman he hires immediately goes to Viking, telling him what’s going on, and ends up getting Viking on Coxman’s brother’s trail, ending with his brother being murdered. So, with dead piling up all around him, Coxman decides to change gears and changes his goal to kidnapping Viking’s son. Which is a coincidence, because White Bull and his men are planning on killing Viking’s son as well. Coxman gets there first though, and brings Viking’s son to Kehoe, planning on holding him ransom, and instead creating an ambush where Viking’s men and White Bull’s men will all arrive in Kehoe at the same time. A massive fire-fight opens up at Coxman’s workshop where he’s hiding Viking’s son, which ends up eliminating Viking, most of his gang, and most of White Bull’s gang. But, Coxman ends up surviving, as does White Bull, and the two agree to just drop everything and go about with their lives, forgetting any of this insanity ever happened. 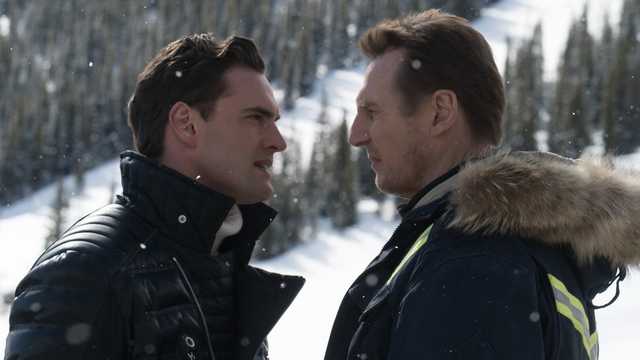 Cold Pursuit isn’t exactly a great movie. The writing is a little campy, relying on some truly ridiculous monologues that just don’t resemble any way actual human being talk. It also has a hilariously wrong-headed understanding of Colorado’s geography and climate, which probably won’t bother anyone who isn’t from Colorado like myself, but certainly drew a lot of befuddled laughter from my audience. It’s a somewhat sleazy revenge flick, exactly the kind that Neeson has been churning out for the last few decades. But, it does kind of try to rise above the rest of these movies by inserting some weird dark humor throughout. This movie has some legitimately funny moments, and seems to be willing to take the piss out of Neeson’s more serious revenge flicks. It never quite embraces that idea, and as a result some of the humor ends up sticking out like a sore thumb. Which is a shame, because if this movie had really leaned into it and become something approaching a satire of the entire revenge subgenre, it could have been something really special. But, as it stands, it’s nothing overly memorable. It had some good ideas, and probably could have served as a bridge to a new phase of Neeson’s career.

But, that’s probably not going to happen now. Cold Pursuit isn’t a particularly important film. It was generally well-made, and I had a good time while watching it, but it isn’t really a film that was going to get a whole lot of attention. It’ll probably end up smack-dab in the middle of my rankings for the entire year. Who knows, maybe it would have worked for some people and found its audience, becoming something special. But, now all anyone’s ever going to think about this movie is the real-world controversy surrounding it. Which, isn’t even about the movie, it just happened in the press tour. Now, I’m not saying that that’s not earned. The things Neeson said are reprehensible, and if people feel like this movie should be pushed aside, along with Neeson’s career in general, I can’t argue against them. But, I still find it fascinating that a movie can be completely overshadowed, and potentially destroyed, thanks to things happened completely unconnected to it. Events in the real world have made it so that this movie probably performed far worse than it would have, made it reach less people than it would have, and probably be forever tarnished. This wasn’t an amazing movie, making this fallout a tragedy or anything, but as more and more comes out about people in power, their bad behavior no longer quite as accepted as it was even three years ago, I feel like it’s going to be increasingly likely that films get overshadowed like this in the future. For good or bad.