Velvet Buzzsaw and the Horror of Creation

Well, another week has gone by and another new film from a fairly established director has found its way onto Netflix. The streaming giant really seems to be making a play for legitimacy, picking up a whole plethora of new films that come from filmmakers who have some actual clout, apparently hoping to borrow it. And, it’s been pretty hit or miss. I don’t know if there’s just something about Netflix not quite knowing how to produce movies yet, or if they’re just picking up films that no other distributors really wanted to touch, but a lot of their original movies of late have been just kind of dull and forgettable. And yet, Roma and the Ballad of Buster Scruggs have worked out really well. So, it seems to be rolling the dice pressing play on these movies at this point. Maybe it’ll end up being something special, or maybe it’s be further proof that these talented directors need an experienced production company to help reign in their wilder impulses to make something people will actually want to see. And, the latest director to present something for that roll of the dice is Dan Gilroy, a director who has been really hard to nail down. After a career in screenwriting Gilroy exploded onto the directing scene with Nightcrawler, a sleazy and immensely enjoyable little noir thriller. But, he then followed that up with Roman J Israel, Esq, a biopic that got quite a bit of awards nominations, but that I really never heard anything too impressive about, and never found the time for it. It was a weird one-two punch, leaving people to have no real idea what to expect from any future Gilroy films. So, when details and trailers of his latest film, Velvet Buzzsaw, started to be released, it was certainly a surprise. A weird satire/horror film about art collectors who have accidentally come in contact with cursed paintings that begin killing them? Well, that’s certainly an idea I’ve never seen before. But, could it sustain that strange mixture of tones and concepts for a full movies? Turns out, not really.

Velvet Buzzsaw takes place in the weird world of Los Angeles modern art. Specifically following a powerful and eccentric art critic named Morf Vandewalt and a rising art agent named Josephina who works for a popular art gallery. The owner of the gallery, a former punk-rock star named Rhodora Haze is constantly looking for ht next hit artist, and pressures Josephina to do whatever she needs to do to make that happen. Everyone seems to be fighting over who gets to represent two popular artists, Damrish and Piers, but Josephina doesn’t seem to have much chance at winning their newest projects. But, her prayers are answered when she happens upon the apartment of a neighbor who has just died. The man’s name was Ventril Dease, and Josephina ends up walking into his apartment to look for a missing cat, only to find a treasure trove of artwork that Dease had apparently been making his entire life. There’s something haunting and beautiful about the paintings, so Josephina decides to steal it all. She calls up Morf, who she’s begun a relationship with, asking for his opinion. And, he loves them. He says Dease is a wonderful painter and a fascinating figure, and pushes Josephina to bring the paintings to Rhodora. She does, and they become an immediate smash success, drawing in a vast swathe of art-lovers who all become absolutely transfixed with these paintings and the mystery behind their creator.

However, things start to get supernatural pretty quickly. We the viewer start seeing the paints move while the various art-lovers aren’t paying attention, but they claim their first victim when an assistant of Rhodoroa’s takes a bundle of the Dease paintings to a storage facility to create false scarcity, and he ends up crashing his car into an abandoned gas station after seeing one of the paintings move. And, while looking for help in the station, he’s murdered by a painting of monkeys that comes to life. And, once the paintings start killing, they don’t want to stop. Morf has began investigating the life of Dease, hoping to write a book about him, and in the process learns that Dease was a deeply disturbed man who spend time in a mental asylum after killing his abusive father, and has apparently poured quite a bit of his hate into the paintings, along with his own blood. And that magical hatred seems deadset on killing people who are financially benefiting from Dease’s paintings. They end up killing a rival gallery owner who attempts to discredit Dease by causing an instillation to hang him, and a curator named Gretchen is killed after a modern art sculpture comes to life and rips her arm off, having her bleed to death. And, after three people have been killed, everyone else becomes terrified that they’re next. Josephina finds the whole thing ridiculous, but Morf becomes deeply convinced that they’ve unleashed something evil, and begins attempting to shut down the art world’s burgeoning interest in Dease. But, that doesn’t seem to be able to save him, because that night while Morf is attempting to hide some Dease paintings in a storage facility he’s brutally killed by a robotic sculpture. And, Josephina is next, finding herself absorbed by a large graffiti mural, becoming part of the art. Which just leave Rhodora, who fully believes that the paintings are haunted, and attempts to move every bit of art from her home so that nothing can kill her. Unfortunately, a tattoo on her neck from her former band, the Velvet Buzzsaws, apparently counts, and it comes to life, slitting her throat, and killing off the last of the art lovers. 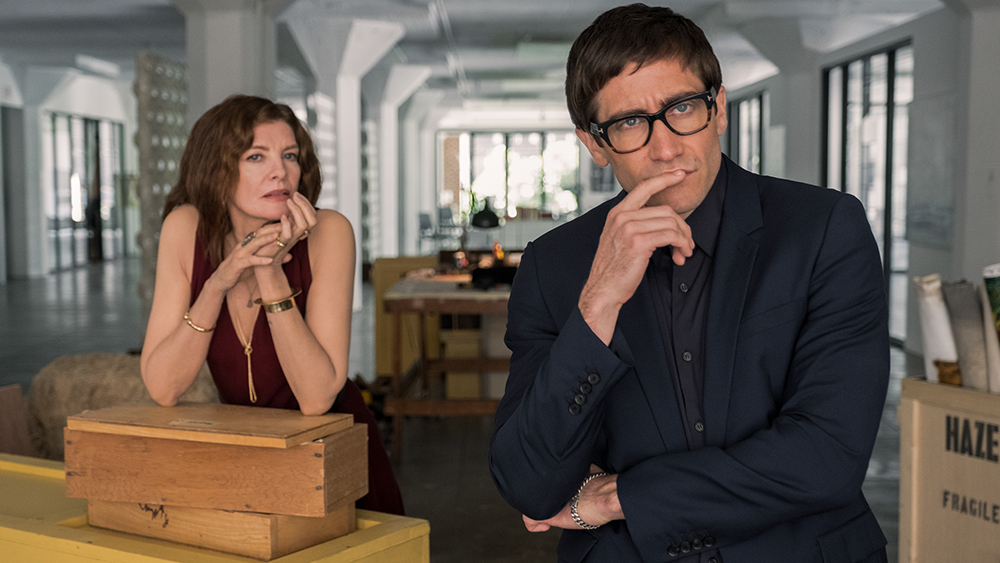 I’m not quite sure what I was expecting from this movie. Like I said earlier, I’ve never seen Gilroy’s second film, so all I had to go on was what I knew of Nightcrawler, a film I liked quite a bit. It was pulpy and weird, and hearing that Gilroy was making another film with Jake Gyllenhaal and Rene Russo made me assume that it would be something similar. But, it really wasn’t. I’m not quite sure what this movie was. The marketing definitely seemed to imply that this was going to be a dark satire, a movie that was mocking the world of modern art, and more than likely the idea of art criticism at large, while also getting a little scary. And, I guess it did that. At least at times. But, the feeling I found myself most experiencing was simply boredom. The satire never felt particularly sharp, and the horror never really connected that well. The movie took a lot of easy, low-hanging-fruit jabs at the world of modern art that never really went further than “aren’t they pretentious?” but never really seemed to have anything more to say beyond that. And, I feel like the horror never really worked primarily thanks to the film’s biggest problem, that almost none of the characters are likable in any way. They’re all just kind of vaguely self-absorbed and unpleasant, which makes you not really care about the fact that they’re being killed by evil paintings. And, with no real stakes, the horror was just kind of startling, but without any real suspense. There were some interesting ideas in the movie, and it was generally full of good performances, it just felt wildly uneven, and kind of self-satisfied, which ended up giving us a movie that was fun to look at, but without out much going on beneath the surface.

I find myself kind of at a loss to really figure out what went wrong with this movie though. Because both sides of the film do seem interesting, and it feel like all the pieces are there, they just didn’t connect in the right way. The idea of a horror film set in the modern art world where a series of haunted paintings are killing people seems like a really solid one, especially if done in a kind of campy, pulpy way. But, that’s just not what we got. I’m still not sure what we got, because after it became apparent that the film was kind of a slog I at least assumed that it was going to become some sort of screed against criticism and the idea of people critiquing other people’s art, the traditional vain subject that directors can spit out after one of their films gets tepid reviews. But, it didn’t even become that. The best I could tell, the whole idea of this movie stemmed from the idea that the sheer act of creation can sometimes be terrifying. This Ventril Dease had a pretty horrible life, and seems to have found some supernatural way to put that misery back into the world, but the idea that something you make could have horrible ramifications for others is a legitimately scary idea. I don’t quite know if the movie was trying to make that point, since it kind of seems like Dease did whatever he did on purpose, but I still found myself struck by that concept. You pour your heart into some form of artistic expression, and then it ends up ruining other people’s lives. That could happen, and it’s the darkest outcome of creativity. And, that could have made for an interesting horror movie. But, instead we got this. C’est la vie.

Velvet Buzzsaw was written and directed by Dan Gilroy and released by Netflix, 2019.