Howdy everyone, and welcome back for yet another installment of Bat Signal, my never-ending quest to read every issue of Detective Comics in random order, and with basically no context. And, folks, it’s that time again. Time to talk about a story that we won’t get any sort of closure with! That’s right, it’s the first part of an ongoing storyline, which means we won’t be talking about any other part of it any time soon. And, this is a crazy one. One that I really find myself fascinated to see the outcome from. Because today we’re going to be talking about the opening chapter of a particularly crazy story-line called Mud Pack, which seemed to come about when the writers at DC realized they had far too many characters called Clayface rattling around their canon, and decided to just mix them together. That’s right, we’re going to be talked about a whole lot of mud this week.

The story begins on a storm night at Arkham Asylum, specifically in the cell of Preston Payne, the third supervillain to take the name Clayface. Payne received his powers by injecting himself with the blood of the second Clayface, giving him a terrible condition where he’s constantly in pain unless he touches another person and melts them. So, he wears a weird containment suit, which he obviously has to wear in Arkham where he lives with his weird mannequin wife Helena. Unfortunately, there’s trouble in paradise, and Payne has grown resentful of Helena, due to some apparent simmering resentment, and has decided to divorce his mannequin bride. Which quickly turns ugly. Payne starts screaming at Helena, all while the guards at the Asylum watch on in amusement. But, that amusement turns to concern when Payne ends up knocking Helena’s head off, causing him to fly into a panic. He starts banging on the door to his cell, demanding someone to help, and in the process ends up battering the door down, freeing himself into the Asylum. And, as soon as Preston finds himself free of his cell, he immediately realizes that he can finally scratch that painful itch and kill some people. He ends up activating his containment suit and kills the guards, finally gaining some semblance of solace for the first time in quite a while. Which, obviously gets the attention of the Gotham City Police, who fire up the Bat Signal. Batman’s a little busy beating the hell out of some muggers, but as soon as he sees the Signal he hops in the Batmobile and races toward Arkham Asylum. Which means that Batman drives right past something incredibly suspicious. A shadowy man in a hat and cloak comes marching down the street, clearly hiding something, and earning the attention of a pair of thugs. They follow the mysterious man into a rundown old theater, where he promptly reveals himself to actually be Basil Karlo, the original Clayface who was just an insane actor who wore a clay mask. And, he promptly stabs the two hoodlums to death, too busy with his evil machinations to worry about them.

Meanwhile, Batman is chatting with Commissioner Gordon, getting filled in one what’s going on with Preston Payne. And, the situation has escalated since we last checked in. Payne has managed to kill several guards, and has escaped the Asylum, and is now apparently running around the rural farmland outside the Asylum while some surviving guards are attempting to track him down. And, Payne is starting to run out of steam. He’s in a lot of pain, and he’s still feeling really guilty about killing Helena. So, with little else keeping him going, Payne collapses in the woods, willing to be found by the guards. Which is when a mysterious woman comes marching out of darkness, offering to help Payne. And, as the guards finally arrive, the woman uses some sort of mental power to control them all, causing them to shoot each other to death, letting her telekinetically lift Payne into the air, carrying him back to the weird old theater that Karlo is hiding out in. 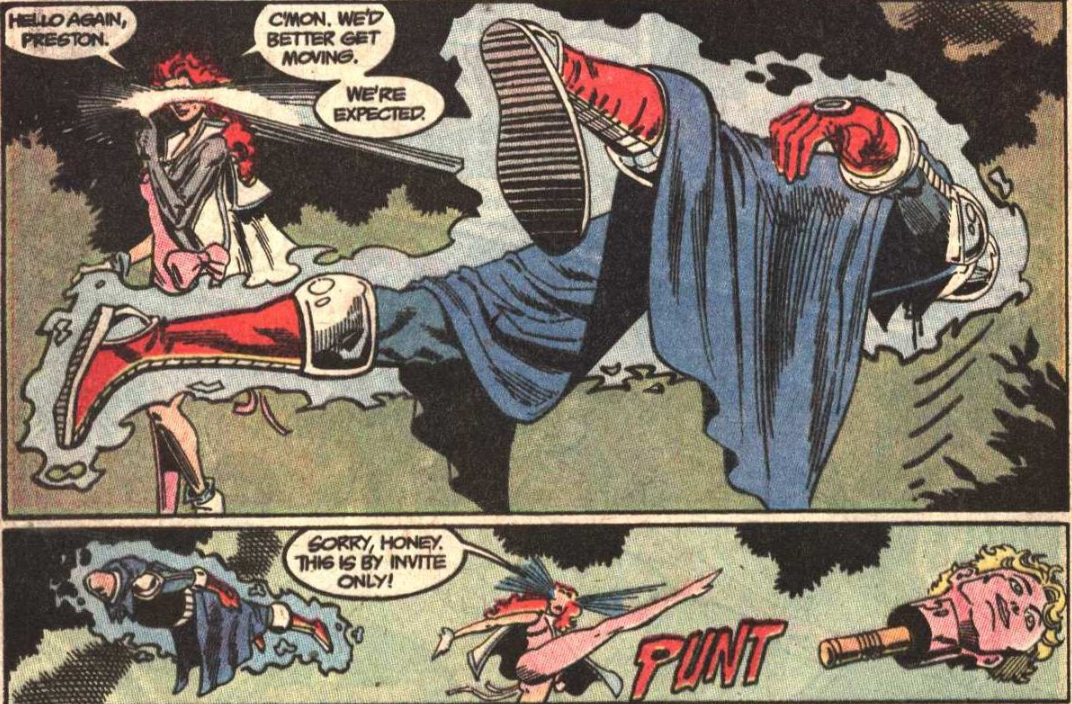 And, Karlo is hard at work back at the old theater. But, what exactly he’s planning on doing is a little confusing. He has apparently gotten a hold of the remnants of Matt Hagan, the second Clayface, who was dead at the time. But, Karlo believes that he can bring Hagan back to life simply by putting water on the dead clay. And, despite that being such a clearly fantastic idea, it doesn’t work. He even molds the clay into a tiny man. But, bupkiss. The little clay man just falls apart, and Karlo realizes that things might be a little harder than that.

But, you might be wondering who that woman who is kidnapping Payne is. And, so is Batman. He has reached the Asylum and is talking with the guards, who filled Batman in about the crime scene with the dead guards. They also mention that Payne had received a visitor recently, which is obviously suspicious. Batman takes a look at the security footage of Payne’s time with this guest, and is shocked to find that the woman is a superhero he knows called Looker. Which, doesn’t make a whole lot of sense to him.

However, this isn’t actually Looker. This woman is apparently the fourth Clayface, called Lady Clayface. And, she’s arrived at the theater Basil Karlo has been hiding out in, with the unconscious Payen in tow. Which is where thing start to get weird. Karlo has clearly called all these four Clayfaces together, with the goal of uniting. And, even though they couldn’t revive Hagan and Payne is passed out, he still starts monologuing to Lady Clayface, telling her his goals. First, he wants Claypeople recognized as victimized minorities deserving of respect. Second, he wants them to become the most powerful people on Earth. And third, he wants them to unite and murder Batman. Which is where the issue ends!

Issues like this one, that are part of a larger ongoing narrative, can often be pretty frustrating in regards to the strange confines I’ve built myself for this project. Often it can be incredibly unsatisfying to get only part of a story, especially the first part. There’s no closure, and you’re just left with a whole lot of exposition and set-dressing that doesn’t go anywhere. But, every now and then I come across an issue like this one, that’s frustrating for a similar but slightly different reason. This issue frustrates me because it’s so insane, it sets up such a ridiculous story that I really want to see where it goes. Because this issue was hilariously weird. The idea that by 1989 there were four different people running around the DC universe who called themselves Clayface, and that were tenuously related to each other at best, is just so quintessentially DC Comics. But, where DC usually tended to just ignore the weird canonical inconsistencies that came from decades of comics, several acquisitions of other companies and their characters, and a whole bunch of reboots, this story decided to lay it all out on the table, and find a way to reckon with all these Clayfaces. And, from what I understand, this story goes in some incredibly weird directions, which I really hope I get to read sometimes soon. But, as it stands, this is just a fun, weird, and incredibly engaging issue of comics that really succeeded in making me want to see where things go. All while absolutely blowing my mind with the knowledge that at the same time the Tim Burton Batman movie was shattering records, and the cultural cache of Batman couldn’t have been higher, this was the insane story people would have found if they felt obliged to pick up a comic. This story. About a bunch of mud-people.

“The Mud Pack – Part One – Men of Clay” was written by Alan Grant, penciled by Norm Breyfogle, inked by Steve Mitchell, colored by Adrienne Roy, and lettered by Todd Klein, 1989. 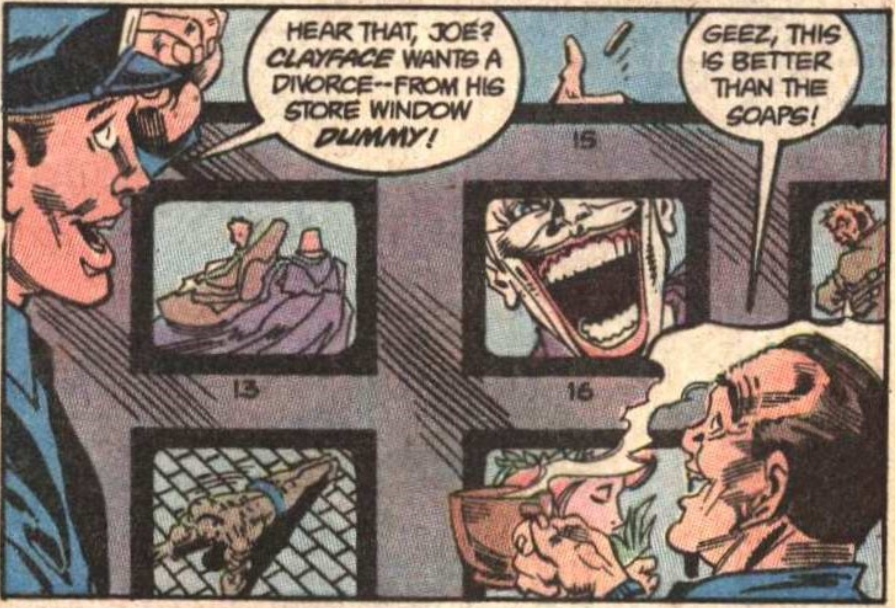