Merry Fake Christmas, everyone! I’m getting back into the swing of things this week, and after yesterday’s less than stellar introduction back into the world of the Simpsons, I’m at least glad to say that today is better. It’s by no means a wonderful episode of the Simpsons, but as both a Christmas episode and an episode from the thirtieth season, it’s doing pretty well!

The episode begins on Thanksgiving, post-gorging, as Homer and Marge are doing their best to clean up the vast swaths of destruction. And, while they’re doing dishes, Lisa and Bart come rushing in wearing Santa hats, brandishing Christmas wish-lists. Because, as we all know, the second that Thanksgiving dinner is over it’s time to start fixating on Christmas.

Homer and Marge aren’t super excited to start worrying about presents this early, but Bart and Lisa have some slightly good news. They both only want one thing, and it’s the same thing! But, that thing is a fancy smart TV, which is insanely expensive. Homer and Marge are pretty sure they aren’t going to be able to afford this fancy TV, but also don’t want to disappoint their children. Luckily, they find a possible plan. The very TV the kids want is on a super sale for Sprawl Mart’s Black Friday Sale.

So, Homer and Marge are going to have to fight the unwashed hordes of Sprawl Mart to get themselves a Black Friday TV. Which, you’d think would already be a waste of time, since they’re deciding this the evening of Thanksgiving, when most lunatics would have long since abandoned their families to start standing in the cold, since most stores now open on Thursday. But, this show is apparently still laboring under the naive thought that stores don’t open until 6 AM on Black Friday, so Homer and Marge have time.

They decide that Marge is going to go first, and Homer will arrive to relieve her, giving themselves some marital backup. But, as soon as Marge gets there, she starts getting suckered. There’s barely a line, but she ends up standing right behind Gil, who immediately starts complaining about his life. He’s freezing cold, and tells her that the only thing he wants is some stuffed animal for his granddaughter. And taking sympathy on him, Marge slowly starts to give Gil all of her warm clothes, meaning she quickly starts to get too cold to handle.

Luckily, Homer is about to arrive to relieve him! Until Homer gets his scarf caught in the front door and knocks himself out, leaving Marge to freeze. Eventually the door is opened though, and Marge is forced to race into the building, ready to kick ass and take names with all the other insane animals. And, it pays off. She reaches the electronics department with ample time to grab the TV. But, before she can do it, she sees that Gil is being trampled by other people, and isn’t going to get that doll.

So, like the good person she is, Marge decides to abandon her mission and saves Gil, getting him the doll. At the expense of getting the TV. And, to rub salt in the wounds, Gil then immediately sells the doll at a higher rate. So, she sadly leaves the store, right as Homer shows up, vowing that she’s going to find a way to make Christmas great.

The next day though, Marge breaks the news to Bart and Lisa, and they immediately start acting shitty. But, Homer takes them aside and berates them for being little assholes, and tells them that they should instead make their Christmas all about Marge. They actually agree, and the three decide to plan a last-minute vacation to Florida. They hop on the internet, and end up quickly buying tickets to some motel/amusement park in Florida, primarily because the website pressures him into thinking tickets are going fast.

They then broach the topic of going on a vacation for Christmas with Marge, which feels like something they should have done before, and are shocked to find that she really doesn’t like the idea. So, they need to pull a BA Baracus, and drug Marge’s tea. She ends up waking up when the family are already in Georgia, and after being a little irritated, decides to lean into it and have a nice vacation with her family.

Which is when they get to the terrible resort. As you could probably guess, the resort is an absolute nightmare, rundown, low-rent, and the weather is terrible. Plus, their room is apparently built for dwarfs, with four feet high ceilings. It’s obviously terrible, but Homer and the kids have a quick meeting and decide that they need to keep happy faces on, so that Marge will be tricked into having a good time. 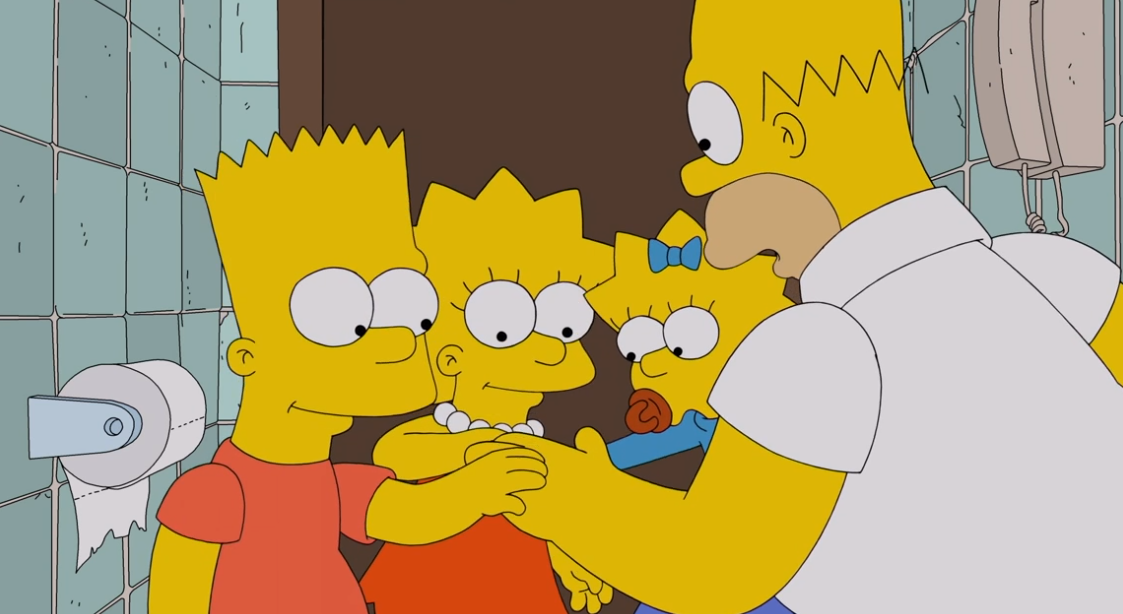 So, the next day they decide to make the most of their little vacation, and head to the horrible amusement park next to the motel. And, it’s not good! Most of the attractions are closed for police investigations and the mascot characters are weirdly aggressive. But, they keep a smile on their faces, trying to have a good day before returning to the motel to listen to their neighbors have angry, angry sex.

Which is the last straw for Bart and Lisa. They sneak out and head to the manager’s office to complain, and find that she couldn’t give less of a shit. She doesn’t care about their predicament, and refuses to refund their money. So, the family head back to the amusement park, and look at a terrible Hall of Vice Presidents robots, which is when Marge finally snaps.

She tells them all that it’s a terrible vacation, and that she wants to leave. The family admit that they agree, but they also want their money back. That won’t work though, so instead Bart pulls a Godfather and cuts the heads off of all the Vice Presidents, putting their heads in the manager’s bed, before driving back to Springfield.

However, when the family are only five miles away from Springfield, their car runs out of gas, more or less in the middle of nowhere. It’s snowing outside, so the family have to hike through the snow, in their Florida clothes, searching for some warmth and light. And, they find it in the form of Moe’s Tavern. And, it’s actually bumping inside. Apparently Moe serves Christmas dinner to the old and needy, and invites the Simpsons inside. Luckily, Grandpa is already there, so the family end up having a nice dinner together. And, as an added bonus, the terrible motel manager sends the Simpson’s a check for their money back, which is enough for them to buy their TV. Like I said earlier, this episode isn’t amazing, but it at least makes some amount of sense, so it’s better than yesterday’s oddity. Christmas episodes can often be very hit or miss, and lately that rate of success has gotten pretty bleak. But, this one wasn’t terrible. There were certainly some elements to it that felt like they were from several years ago, but I think more or less the episode works. The idea of Marge deciding to go to Black Friday on Thanksgiving and having the store open at six is completely ridiculous. I worked several Black Friday’s back in the day, and it’s a pure nightmare, especially as I watched the time my store opened creep earlier and earlier each year. Also, the kids are psyched about a smart TV? Is that a particularly timely goal? But, whatever, that’s just petty complaints. The central idea, that the family take Marge on a Christmas vacation that ends up being terrible, is a good one, and I think it mostly works. Once they actually get to Florida it becomes a little repetitive, with them just going to the amusement park, going back, going to the amusement park, going back over and over. But, it generally worked. Which is better than most episodes this season.

Take Away: When you want to take someone on a vacation, maybe confirm first that they want to do that.

“‘Tis the Thirtieth Season” was written by John Frink and Joel H Cohen and directed by Lance Kramer, 2018. 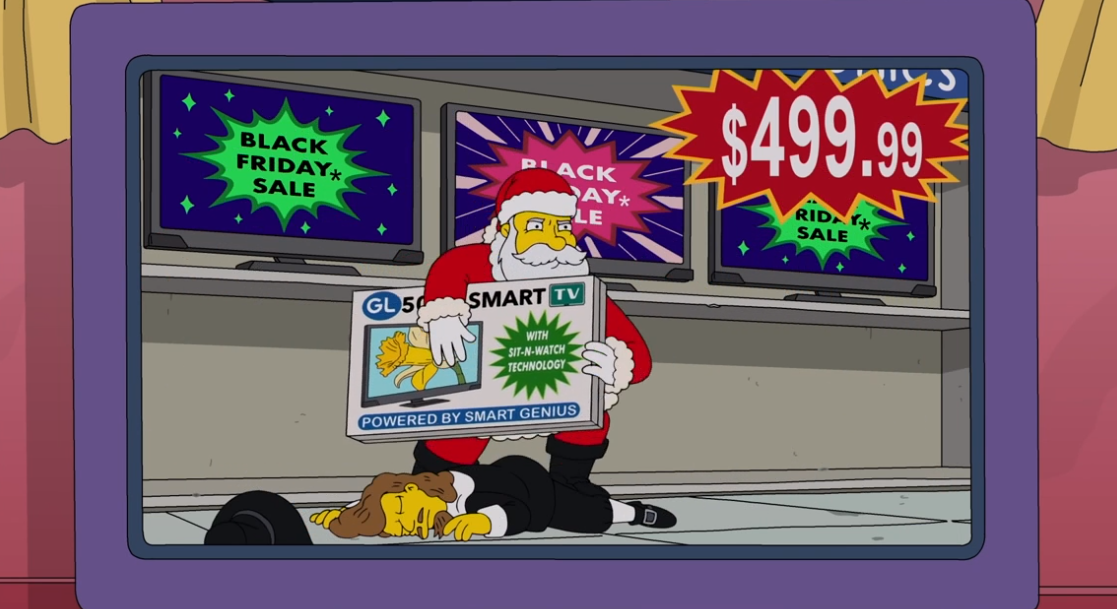 Tagged as: 2018, Lifetime of Simpsons, Season 30, the Simpsons, Tis the Thirtieth Season