Hey there everyone! My little hiatus from the Lifetime of Simpsons is finally over! I’ve been away for a while, and have built up a little backlog of episodes, meaning that this week is going to be pretty old-school. I’ll be talking about all four episodes I’ve missed this week, which sure was a fun way to get back into the swing of things. Just diving back into this extremely underwhelming season! And things start off with this bizarre little episode that just rubbed me the wrong way almost the entire time, from it’s incredibly timely Incpetion couch gag to the fact that the episode feels like it ends nicely and then keeps going for a whole other act. Sounds fun!

The episode begins at Springfield Elementary where a bunch of parents are going to have to suffer through a second-grade play, which is at least promised to be shorter than last year. It appears to be all about food, and starts off with Ralph struggling to rattle off a series of short facts about broccoli, earning him the ire of Llewellyn Sinclair, who has really fallen on hard times.

We also get to see Nelson explaining how veal is made by having him dress up as Anton Chigurh and kill a fake calf. Which, is weird for a lot of reasons, the least of which is that Nelson isn’t in the second grade. And this little demonstration really freaks out Lisa, who comes storming onstage in a pork chop costume, berating everyone for liking it. And the show basically ends at that point, everyone gladly leaving, while Lisa gets to meet up with her family, still furious about the veal thing. And, in classic Homer fashion, he has no idea what to say, and ends up just making things worse by telling her she did great, even though she didn’t actually do anything, proving he wasn’t even paying attention.

And that really sits on Marge. So, the next day she tells Homer that he needs to do something with Lisa, to have some bonding time that requires he speak to her and make eye-contact. So, Homer decides to just drag Lisa to the mall so they can shop for clothes, which is really inconvenient to Lisa, since she’s recently started reading To Kill a Mockingbird. Homer makes a lot of awkward small talk, until they get to the little girl clothes store, and he becomes horrified how skanky everything is. Homer ends up getting up on his high horse, ranting and raving to everyone in the store about how this is unacceptable, and that his young daughter shouldn’t be treated like a sex object.

You’d think that this would be incredibly uncomfortable or Lisa. But, because she’s fully engrossed in To Kill a Mockingbird, she instead sees Homer standing up for her honor as very heroic. In fact, she starts to see him as a modern day Atticus Finch. And, just like that, she starts to respect Homer. She just makes one major mistake. She tells Homer about this, and it immediately goes to his head.

Homer then starts trying to keep this respect alive, hanging out with Lisa and doing things to remain honorable. He even watches the movie of To Kill a Mockingbird with Lisa, which is really weird, because they just play a few scenes from the movie, and it’s very bizarre to see real humans on the Simpsons. But, regardless of that weird quibble, Homer really starts to enjoy it. He and Homer are spending all of their time together, and are having a great time together.

But you know who doesn’t appreciate it? Bart. He’s furious that Homer and Lisa are spending so much time together, and starts to act out. Marge does notice it though, and asks Homer to spend equal time with both kids, which doesn’t really work. So, confused about why he cares about Homer so much, he ends up going for a speed-round with the elementary school therapist. And, the therapist gives pretty terrible advice, telling Bart that he wants what he can’t have, but that he should just act out until he gets the attention he needs.

So, Bart plans a big prank, which takes the form of him and Milhouse heading to Shauna’s bat mitzvah. Milhouse has an asthma attack in from of the Squeaky Voiced Teen, who was working as a valet, and when the Teen races off to take Milhouse to the hospital Bart gets his hands on all the keys, and switches them around. So, when the bat mitvah finally ends, chaos quickly spreads, and a huge brawl begins. The furious synagogue-goers look for a scapegoat, and Milhouse ends up popping back, and ratting Bart out. 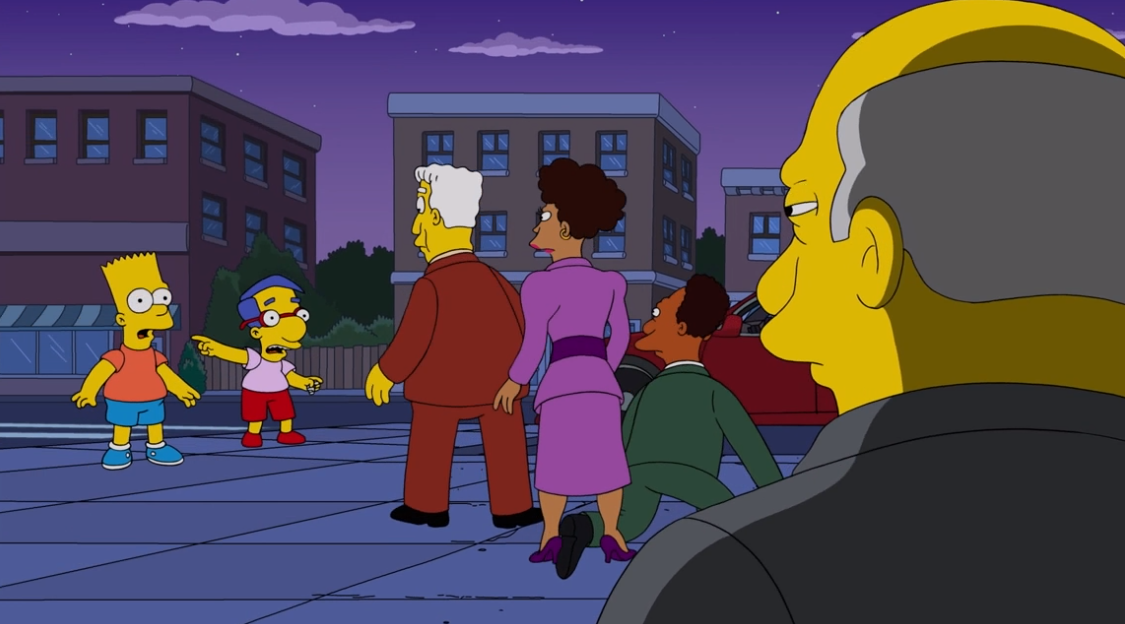 The mob then chases Bart, as he flees back to the house. He finds Homer and Lisa sitting around watching Mockingbird again, and begs them to help. So, taking another page from Atticus Finch, Homer heads out to the front of the house, and awaits the mob. They arrive, and Homer ends up speaking calmly and rationaly, disarming them. Lisa then comes out, speaking in a Southern accent, and manages to get the mob to remember their humanity and sense of neighborly goodness. This defuses the mob, and they leave, letting Bart survive.

Which feels like the end of the episode, right? Everything tied up pretty nicely? Well, that’s not the case! Because we then see that this little event didn’t do anything to fix Bart and Lisa’s feud. They end up fighting again, this time because Bart badmouthed Homer and Lisa couldn’t stand any insults to her perfect father. Which really starts to worry Marge. She ends up going to that same school therapist, asking him advice on what to do with her daughter’s unmitigated hero-worship towards her father, who isn’t that great.

He doesn’t help though, so Marge returns to the house and just straight up tells Homer what she feels. She says that she’s worried Lisa worships him too much, and that its tearing the family apart, so Homer decides to just go ruin his relationship with his daughter. But, luckily, Lisa has finished To Kill a Mockingbird, and no longer needs to see Homer as Atticus Finch, just making everything go back to normalcy. Homer then has a somewhat sweet moment with Maggie as he promises to make her obsess over him next.

This episode is weird, right? Like, what was even going on with it? The idea that Lisa becomes obsessed with To Kill a Mockingbird and thus becomes obsessed with the idea of Atticus Finch is a pretty decent one. And, looking past Homer’s faults and making him the subject of her hero-worship certainly had potential. Homer and Lisa episodes have a great history of being great, and that should have been a solid premise. But, instead, the episode ends up becoming a Bart story, with him just being a jerk because he’s not getting one hundred percent of the attention. Which wasn’t that interesting. I just don’t care about episodes that revolve around Bart being as asshole and not learning any sort of meaningful lesson. I thought that he was maybe going to learn something when Homer and Lisa’s Mockingbird cosplay saves his ass, but no. That wasn’t actually the ending, and he just keeps being an asshole until Marge just straight up capitulates to him, telling Homer to be a worse father. Not that that mattered, since Lisa grew as bored with the premise as I did, and just kind of fizzles out. I don’t know, I didn’t want to come back negative, but boy oh boy was this a rough episode to get back into the swing of things with. It’s not a great sign when as soon as this episode ended I started frantically Googling to get any confirmation that the show had been renewed for a 31st season, or if I was finally free. Hopefully the rest of the week picks back up!

“Daddicus Finch” was written by Al Jean and directed by Steven Dean Moore, 2018.

Tagged as: 2018, Daddicus Finch, Lifetime of Simpsons, Season 30, the Simpsons