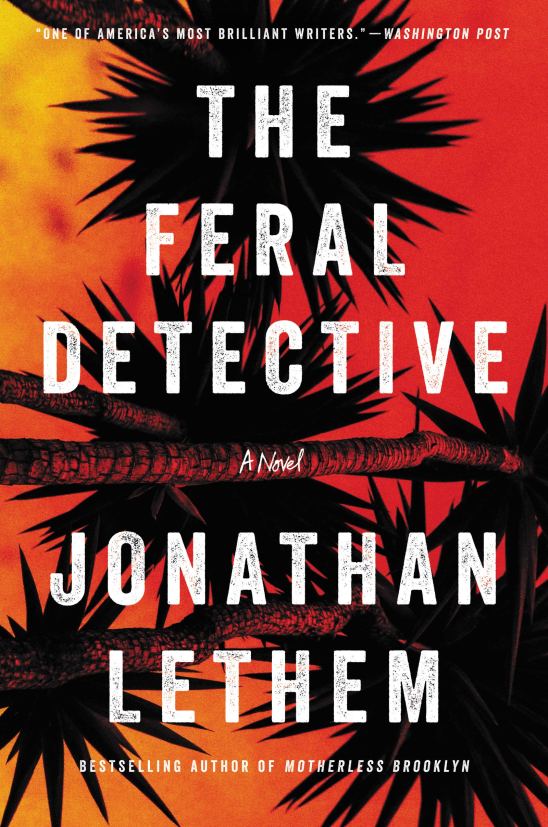 If there’s one thing that I’ve learned through my experiences reading the novels of Jonathan Lethem, it’s that I’m probably not going to get the book I thought I was getting. Which, has been positive and negative. This is the fourth of Lethem’s novels that I’ve read, and by and large I’m a big fan. I’ve talked about two of these books before, and have really liked them both, even though the book I finished off was nowhere near the book I thought I was getting. Fortress of Solitude was a hell of a read, a sprawling coming of age story that had a bit of surreality to it, but nowhere near what I was expecting. The Gambler’s Anatomy was a pretty fun book, even though it swerved on me pretty quickly and never got back into the lane I was expecting it to. I enjoyed it, but it didn’t blow me away like Fortress of Solitude did. But, the first novel of Lethem’s that I read, and the one that first taught me to never foster any strong expectations when reading his books, was Gun, with Occasional Music. It’s a very hard book to describe, a bizarre hardboiled noir set in a world with sentient animals, the novel really caught me off guard, and kind of set me up for a lifetime of struggling to pin Lethem down. I’ve been wanting to take another dive into his takes on noir ever since reading that first book of his, and as luck would have it, he’s delivered a brand new novel to us that fits the bill. Just hearing the title the Feral Detective had me excited, curious to see what kind of Lethem we would be getting. And, well, it sure wasn’t what I expected.

The Feral Detective tells the story of a woman named Phoebe Siegler, a New York writer who finds herself in the outskirts of Los Angeles the days before the inauguration of Donald Trump, looking for a detective named Charles Heist. Phoebe’s best friend’s daughter Arabella has vanished, and all clues have pointed to Los Angeles, so she hires the services of Heist, a taciturn and grizzled Western archetype who specializes in tracking down missing young people in the Inland Empire outside Los Angeles. Heist is an incredibly strange man, but Phoebe finds herself being quickly drawn in by him, becoming more than a little fixated with him while he tracks down any evidence of Arabella’s location. It’s slow going at first, just some vague ideas that she may have found refuge in a Buddhist monastery frequented by Arabella’s hero Leonard Cohen. But, after a bit of gumshoeing, Heist finally catches the trail of Arabella, and things get weird.

Heist reveals that there is a mini-society of strange drifters living in and around the Mojave desert. They’ve given up on American society and live nomadic lives, off the grid. Two major factions have developed over the years: The Rabbits, a group of kindly agrarians mostly consisting of aging women. And the Bears, a bunch of hunter/gatherer bikers who mostly exist to do drugs and rape people. Heist is concerned that Arabella has gotten wrapped up in these two factions, primarily using his intimate knowledge of their workings. And, he has that knowledge because he was one of the first children born in this world, and spent time among both the Bears and Rabbits before leaving them all behind to spend his life saving runaway children. Phoebe and Heist end up sleeping together at that point, and then head into the desert to track down Arabella. They experience both of these worlds, before learning that Arabella has indeed joined up with a group of Bears, and is planned to become the queen of the new potential Bear king. And, the only way to save her is for Heist to challenge the king for the throne, since he’s considered the chosen one of the Bears. Phoebe then watches as Heist does combat, helping him kill the potential bear, saving Arabella. Phoebe is able to take Arabella back to New York, before returning to Los Angeles to save Heist, assuming that they’re soul mates now. She does manage to save Heist from the Bears after a few failed adventures in the desert, but is then left with the realization that she has no idea who this person is, and what she’s been doing for the last few days, all to distract herself from her country falling apart.

This book is weird! And, I don’t think that I really kept up with it. The first half of the book was okay. It felt like a weird choice to tell a noir story from the point of view of the person who hired the detective, primarily just sitting in her hotel room and waiting for updates while opining about the horror of the impending Trump Administration. But, when the Bears and Rabbits got introduced, I really wasn’t sure what to make of the book. And, after having finished the book, I still don’t know what to make of it. It’s strange. I’m okay with a book having a weird swerve into a different sort of story. Hell, Lethem made it work pretty well with the Gambler’s Anatomy. But I just don’t think it worked for me this time. The whole desert society stuff was actually pretty interesting, but it felt like a whole lot of characters just explaining wordlbuilding to us, without much happening in the world. And that wasn’t helped by the fact that Phoebe Siegler felt like a very weird character. Between her constant fretting over the inauguration, her condescension towards everyone around her, and the amount of focus on her libido that felt weird coming from a male author, she just wasn’t a character whose head I enjoyed spending much time in.

But, part of me still kind of gets it. Everything about this book kind of screams that Jonathan Lethem got really messed up by the election of Donald Trump, and did his best to work through his feelings. And, I get it. Things are bad. And confusing. The world seems to have been turned upside down, and it’s increasingly seeming like these Rabbits and Bear’s inclination to leave society behind and just hide in the wilderness while everything burns down around them make sense. I don’t want to begrudge anyone’s methods for coping with the horrors that are perpetrated on us on a daily basis. There’s no right way to deal with the world we’re living in, and if you’re method is to give up on society and become a burn out in the desert, I guess that’s fine. And if your method is to write a really weird book that kind of functions as a therapy session, then I guess that’s fine too. It wasn’t for me, but I hope someone gets something out of this book. Even if it was just Jonathan Lethem.

The Feral Detective was written by Jonathan Lethem, 2018.