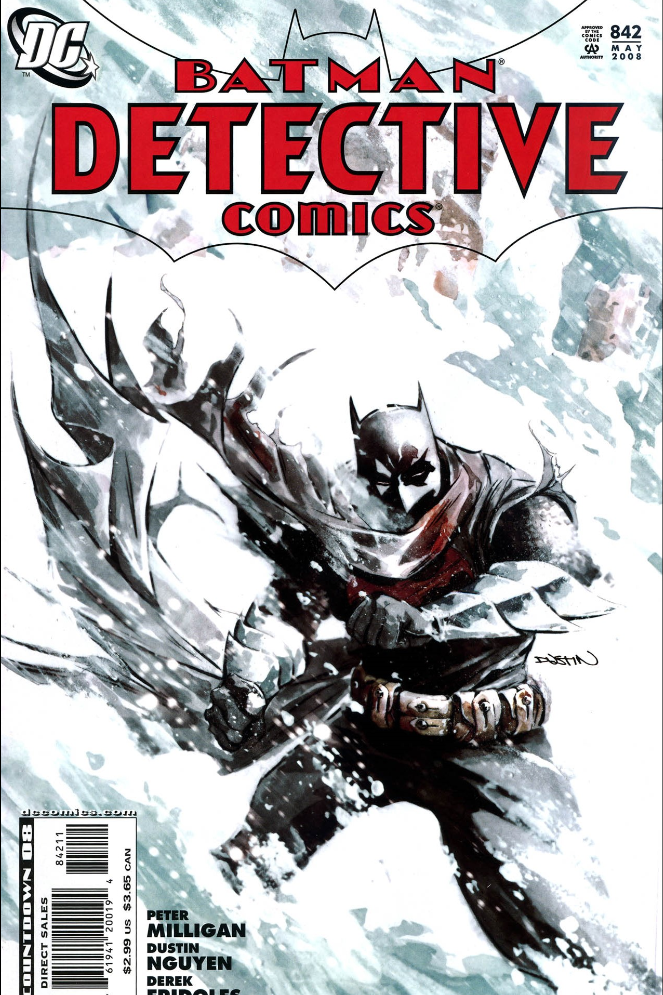 Howdy everyone, and welcome back to yet another installment of Bat Signal, my never-ending quest to read absolutely every issue of Detective Comics, in random order, and with basically no context. And we’re taking a leap into the relatively recent history of the Dark Knight this week. Which can often be kind of a risky trip. Because, for whatever reason, this century of Detective Comics has more or less given up the concept of the comic being full of single-issue tales, falling more into the trap of ongoing narratives, which can be kind of frustrating to talk about using this absurd system I’ve devised. But, thankfully, we don’t have to worry about that too much this week. Because, shockingly, this was more or less a self-contained story. There was a bit of backstory from a story several months earlier, but we actually get to see Batman start and end an adventure in the modern era. So, let’s cut the preamble and dive on in.

The story begins with Batman racing through streets of Gotham, hunting down a new serial killer who has styled himself after Jack the Ripper, and who goes by Gotham Jack. But, it’s not just a regular night, because Batman is wearing something a little out of the ordinary. It’s a medieval suit of armor that’s been turned into a makeshift Batsuit, which we learn was recently given to him by Talia al Ghul. But, it wasn’t exactly a nice gift. The armor is apparently called the Suit of Sorrows, and legend has it that it turns people into killing machines. Bruce, apparently willing to tempt fate, has been wearing the suit as his new costume, and has been experimenting with the suit, trying to prove Talia wrong. But, he’s not doing a very good job of that, because when Batman finally does catch Gotham Jack, he finds himself unable to stop hitting him. He starts to feel a compulsion to beat Jack to death, and has to force himself to stop. Batman then stands by as Gotham Jack flees in terror, preferring to let the man escape than murder him bare-handed.

Bruce then returns to the Bat Cave, planning on running some experiments. He apparently didn’t take the myth of the Suit of Sorrows seriously, but his experience with Gotham Jack has made him realize something is wrong. So, with Tim Drake’s help, Bruce begins to run experiments on the suit, and the results are strange. The suit actually does appear to be so old that it came from the Crusades. They’re also able to find trace evidence of a type of plant that only grows in France near the Alps. All of this seems to come together, along with the fact that the suit was given to Bruce through the al Ghul family, to imply that the suit has something to do with the Order of St. Dumas, a weird religious cult that ties into the ancillary Batman character known as Azreal. Tim figures that Bruce should just drop it at that point, figuring they should just get rid of the suit. Bruce has a different idea.

He flies out to the French Alps, having tracked down the specific minuscule village that the suit appears to have come from. During the Crusades a knight called Geoffrey de Cantonna apparently got vengeance on a raving gang of Moores who slaughtered the townsfolk in the city, and Bruce heads straight for a church named in honor of Geoffrey. And, when he gets there, he hits paydirt. Because the monk inside the church immediately starts to freak out when he recognizes the Suit of Sorrows, to the point that he attempts to stab Batman to death. Batman’s a bit of a better hand-to-hand fighter than a random monk though, and he’s able to disarm the holy man, demanding that the monk tell him what’s going on with the suit. The monk explains that the Suit of Sorrows comes from a splinter cell of the Order of St. Dumas, and gives Batman directions to the remote chapel that will hold all the answers. Batman then spends days looking for the chapel, only for some shadowy men to trigger an avalanche as soon as he steps foot on the chapel’s property.

But, something strange happens after the avalanche. Bruce doesn’t remember much of being under the snow, but he finds himself suddenly above the icy death, seemingly fine. Which may mean that the Suit kept him alive, and somehow moved itself and Bruce out of harm’s way. And, not looking a gift suit of armor in the mouth, Bruce decides to return to the first chapel to see why that monk guided him to his death. And, Bruce ends up arriving at the chapel just as some shadowy assassins working for the St. Dumas splinter cell have arrived to kill the monk for even pointing Batman in their direction. But, Batman is able to defeat the two men, and saves the monk’s life, thus earning the right to hear the full story of the armor.

Bruce returns to Gotham at that point, ready to melt the armor down in a forge the Batcave apparently has, when Tim arrives to hear about his trip. Bruce explains that the Suit of Sorrows was indeed worn by a knight known as Geoffrey, but the legend of him defeating the Moores is incorrect. Geoffrey actually was the one who slaughtered the people of the village, his mind having been broken by the Suit, leading to people coming up with the Moore story to protect him. Bruce has no idea what evil this suit contains, but he in that instant becomes convinced that he needs to prove himself better than it. So, instead of melting the armor down, he puts it back on and tracks down Gotham Jack. He finds the killer about the take the life of yet another woman, and starts fighting with the killer. And, this time, he doesn’t feel the desire to kill Jack. He arrests him like he normally would, and then places the Suit of Sorrows in his hall of trophies at the Batcave, a grim reminder of a path he could have gone down.

This was a pretty fun issue, if a little out of the ordinary. Batman doesn’t spend a whole lot of time in Gotham, instead globetrotting in a way that I don’t usually see in comics outside of the 1970’s. But, it worked pretty well. I guess this Suit of Sorrows showed up a few issues earlier, given to Bruce by Talia, but the issue does a good job at catching the reader up in a way that didn’t really make you feel like you’d missed anything major, instead focusing on its own weird little story. Even Gotham Jack is apparently just in this issue. Which is a pleasant change for pace for these more modern stories. Getting to see Batman head to snowy France and fight cult-members wasn’t exactly what I was expecting from a story that started with Batman tracking down a weird serial killer in a top hat, but the story was a lot of fun. When the Order of St. Dumas came up I got very leery, since Azrael is not really one of my favorite aspects of the Batman mythology, but even that wasn’t enough to spoil this really weird little story. I haven’t read many stories like this, and I probably won’t read many more, but it was an interesting little palate cleanser. It’s getting increasingly rare that I come across a story that doesn’t feel familiar, and that does something I haven’t seen before, so I’ll cherish it when I actually do find it.

“The Suit of Sorrows” was written by Peter Milligan, penciled by Dustin Nguyen, inked by Derek Fridolfs, colored by John Kalisz, and lettered by Sal Cipriano, 2008.