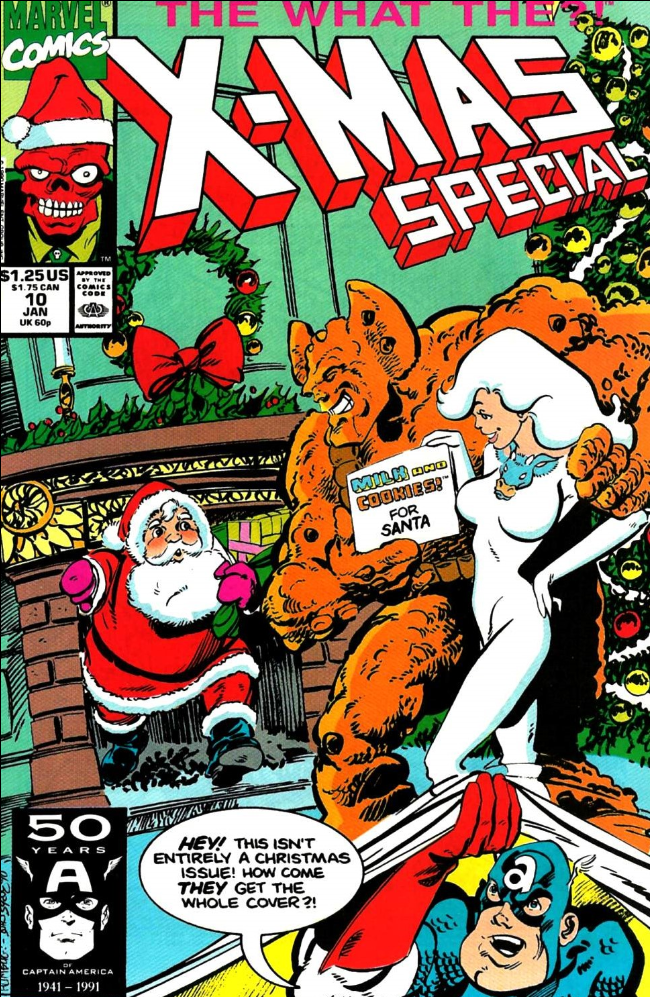 For the last few years I’ve spent December sharing some of the weirdest Christmas related stories that Marvel comics have ever produced. This often takes the form of looking into one of the Marvel Holiday Specials that were so prevalent in the aughts. They tended to be little anthologies featuring a handful of somewhat comedic short stories that had a holiday bent to it. Previously I’ve talked about when a woman turned a broken Ultron into a robotic Santa Claus that decided to destroy the Avengers and when Fin Fang Foom and Wong stopped Hydra from destroying New York with an evil Santa robot. So, it stands to reason I’d take another stab at Marvel’s interpretations of Santa Claus. And, in the course of that quest I’ve come across something truly special. As you can see, I found a way to work my own personal obsession with Doctor Doom into this year’s festivities, and all it took was scrounging up and incredibly strange comic book. See, Marvel has had a strange history in releasing self-deprecating comedy comics. Marvel has always been very aware that they’re telling stories about people with incredible powers who dress up in silly outfits and punch each other, and that that is an inherently goofy thing to do. So, they’re willing to take the piss out of their work in the form of occasional comics that take a lighter look at the world of superheroes. These books have taken a variety of forms over the years, but in the early nineties it took the form of a comics called What The — ?! This was a parody anthology book, letting the writers and artists at Marvel get a tad goofy. And, in 1991 they let Scott Lobdell and John Byrne tell a story where Doctor Doom basically starred in a precursor to the Tim Allen Santa Clause movies. It’s a short one, but it’s very worth it.

The story, which is told with a shocking amount of rhyming, begins on Christmas Eve in Latveria. The entire world is eagerly awaiting Christmas morning, except for Doctor Doom. The citizens of Latveria are sleeping, awaiting presents from Santa, and Doom is sitting in his castle, acting like a real Grinch. He’s looking down on his citizens, proud that he has them in a stranglehold, when a very uncommon noise disrupts his yuletide solitude. The proximity alarms on his castle are going off, signifying that someone is attempting to break into his castle through the roof. Doom is shocked and furious by the impudence of someone trying to break into his stronghold. So, Doom storms through the castle, and ends up finding something unexpected on the roof. Jolly old Saint Nick, trapped in a giant novelty-sized bear-trap. Apparently Doctor Doom has gotten his home-security system from the ACME corporation. You could think Santa would be dead, what with the giant bear-trap snapping around his neck, but he seems to be in pretty good shape, just kindly asking Doom to help him out of his current predicament. But, shortly after his slight appeals for help, Santa Claus passes out from the pain, leaving Doom with a decision to make. And, perhaps surprisingly, he doesn’t just turn around and go back into his castle to let nature take its course. He pries Santa out of the bear-trap, and brings him back down into the castle, setting him up with a room where he can recuperate and be looked over by his reindeer.

And, as Santa lays in the bed, nursing some grievous neck injuries, he makes an appeal to Doom’s heart. He tells Doom that he’s going to be unable to fulfill his sacred duties and deliver all the presents to the children of the world that night, and that Doom has to do the right thing. He has to fill in for him. Doom responds with pettiness, demanding to know what’s in it for him. But, Santa seems to have seen this coming, and says the one thing that would get Doom on board. He promises to fulfill one wish for Doom, granting him his heart’s deepest desire. Which, could be any number of things, but as we’ve seen before, on this site even, it’s probably to release his mother’s soul from Hell. We don’t get into the specifics right now though, all we really see is that Doom accepts. And, after a smash-cut that sadly steals a costume montage from us, we see Doom all suited up and ready to spread holiday cheer.

Yeah, Doom’s having a little trouble with the vernacular. Which the reindeer, who can obviously talk, immediately start giving him shit for. Doom does his best to ignore their mockery, and board’s his own personal sled, ready to fulfill his promise. Santa Doom and the reindeer then take flight from Latveria, while the bedridden Santa Claus looks on in concern, really starting to regret this course of action. But, those worries seem to have been largely unfounded, because Doctor Doom seems to do a halfway decent job. He and the reindeer make good time, travelling around the world delivering presents, while Doom gets into a bit of a groove.

And, while in that groove, he doesn’t really notice that he’s made his way to New York. He’s kind of on autopilot, and doesn’t even realize when he and the reindeer land atop Avenger’s Mansion, just thinking of it as any other house in the world. But the reindeer clue him in on where he is, and the good Doctor decides to tread a little more carefully, slipping down the chimney to deliver some presents for Earth’s Mightiest Heroes. And, while in the mansion, Doom notices something that really catches him off guard. It’s not the giant tree and it’s not the Avenger’s lounging around in yuletide cheer. It’s the fact that apparently the Avengers buy presents for all of their villains. This is of course strange, but it’s not the reason Doom gets so flustered.

Yeah, Doom is primarily pissed off that the Fantastic Four have never sent him a Christmas present before. Which, I guess is fair, they were college buddies. At the very least send him a lame Christmas card or something. And, in true Doctor Doom fashion, he then storms straight over to the Baxter Building. Unfortunately for him though, a couple Avengers did spot him lurking around their house, and assuming he’s up to no good, they begin following him. Captain America, Quasar, and Speedball (such an insane group) start stalking Doom and follow him to the Baxter Building, watching as he slips down their chimney.

Doom starts delivering presents inside the Baxter Building, apparently no longer having an issue with the fact that he gets gypped out of villain presents, and is just doing what he’s supposed to be doing. Unfortunately, since he does have a pretty disastrous relationship with the FF, things don’t go well. They become aware that Doctor Doom has entered their headquarters, and before he can spin a rhyme about how he’s there to deliver presents, the Thing punches him so hard he blasts through the roof of the building. And, once he lands on the rubble of the roof, he finds a group of superheroes waiting to beat the hell out of him, assuming that he’s up to no good. Which, makes sense. And, Doom instantly drops his little act, and gets to battling.

So, Doom, the Fantastic Four, and these random three Avenges start to beat the hell out of each other atop the Baxter Building on Christmas Eve. And, he actually kind of holds his own. Doom’s armor is pretty damn impressive, and it does kind of make sense that he’s able to fend off seven different superheroes. But, the battle pretty quickly falls apart when a small girl happens upon the battle, which has spilled down to the streets. And, she’s more than a little confused why a smattering of New York’s finest superheros are beating the holy hell out of Santa Claus. On Christmas Eve no less. And, the little kid is not alone, because the massive super-battle has ended up next to a “Hospital for Sickly Children.” They have some valid questions, and both Doom and the superheroes quickly realize that they need to let bygones be bygones, and give these kids some holiday cheer. So, Doom hands out some presents, and then hangs out while the superheroes play with the children, giving them the best possible Christmas. Doom even hugs a little kid!

And, after the impromptu Christmas party, Doom wraps up his Santa duties, and returns to Latveria to take care of the real Santa Claus. Several weeks later, when Santa is finally well enough to return to the North Pole, he and Doom have a little conversation on the very rooftop they met. Santa congratulates Doom on such a good job being Santa, and tells him that he has potential to be a very good man. Doom doesn’t much care for this though, and responds that the two’s arrangement is now over, and that if he ever sees Santa Claus again, they’ll be enemies. Santa, not really wanting to spend any more time with Doom, then says that he’ll be leaving, after he takes care of their agreement and gives Doom his true heart’s desire. But, Doom says that that won’t be necessary, because he’s already gotten something important. So, Santa and his reindeer return to the North Pole, wondering what Doom could have meant by that. And the story ends with Doom cuddling a small teddy bear he was given by the little girl at the hospital.

This wasn’t exactly the most substantive story I’ve ever highlighted here on Marvel Madness, but that’s kind of par for the course for these Christmas stories. The Marvel Holiday Special’s usually clock in at just a handful of pages, and are just some saccharine and goofy little story, full of holiday cheer. And, while What The–?! was by no means normally a book full of good cheer, this story really seems to set the template for what those other stories would become. It’s short, it’s sweet, and it’s surprisingly merry. Who would have thought that Victor Von Doom, tyrant of Latveria and greatest supervillain in the world would make such a solid replacement for Santa Claus? And, the craziest thing? I kind of buy it. Doom is an incredibly proud character, and almost all of his motivations as a character revolve around the idea that he’s trying to prove that he’s the best at everything. So, when he encounters Santa Claus and is tasked with taking on responsibilities of delivering presents to all the people of the world, you’d better believe that Doom is going to go out there and be the best damned Santa he could possibly be. It all just fits into my larger obsession with Doctor Doom, and the fact that his one true superpower is that he’s one of the most versatile characters in comics. Obviously this story is out of continuity, and taking place in a much sillier universe, but I still buy the idea of Doctor Doom doing his best to be a suitable replacement Santa. And that’s pretty damn great. So, I hope everyone has some happy holidays, and remembers not to have any unseemly fights in front of sickly orphans.

“I’ll Be Doom for Christmas” was written by Scott Lubdell, penciled and inked by John Byrne, colored by Daniel Vozzo, and lettered by Jade Moede, 1991.