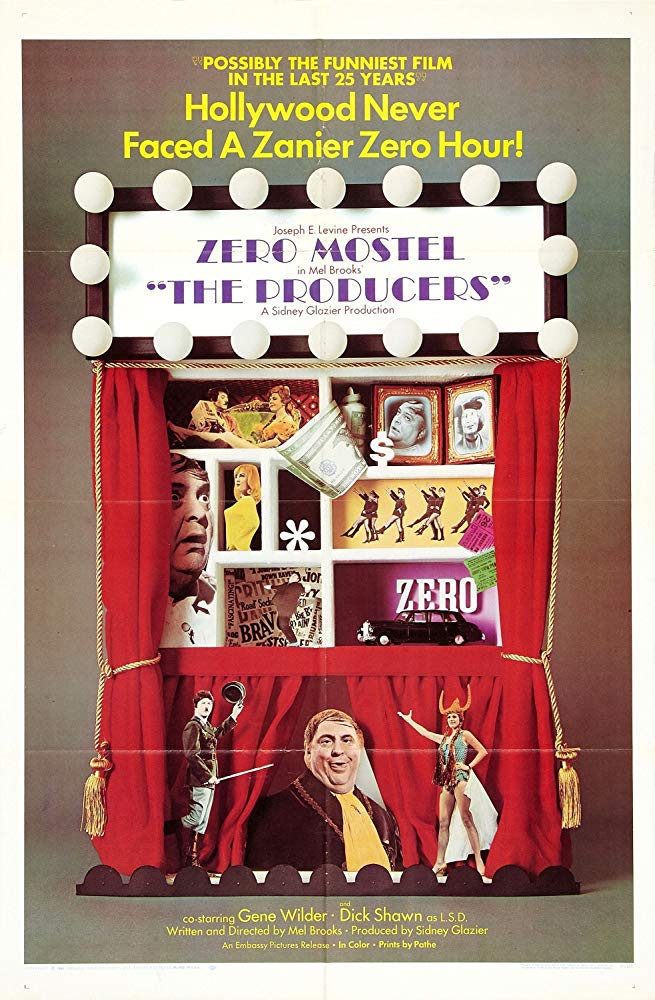 Picking the films the feature on this Cinematic Century project can sometimes be incredibly hard. Because every now and then I come across a year that ended up producing a whole bunch of beloved movies that could easily take the top spot for any other year. I’ve had a couple incredibly difficult years to deal with. But, this is the first time I’ve ever had a watershed moment to handle. 1967 is an absolutely insane year for American cinema. In fact, it’s one of the most important of all time. There have been books written about American cinema in 1967, one of which I’ve talked about before on this site. It’s the year that the New Hollywood movement gained legitimacy, giving us several of the most quintessential films of the movement, and even started to gain mainstream attention in the form of the legitimacy that comes from Academy Awards nominations. It’s a huge year, full of absolute titans of New Hollywood cinema that changed the landscape of American movies for decades to come. And I’m choosing to pick a goofy comedy about con artists. This was a very hard decision to make. But, what I ended up coming down to was the fact that 1967 is full of movies that I respect and think are wonderful pieces of cinema. But, not a lot of movies that I really love. At least as much as the wacky hijinks of Mel Brooks. Which isn’t to say that these other movies aren’t really great. I’ve never really connected with the Graduate, but it’s hard to deny that’s it’s a fantastic portrayal of that confusing malaise that hits so many of us when we leave college, unsure of how to make that transition form adolescence to adulthood. Bonnie and Clyde is a terrific crime film, pulling on America’s endless fascinations with outlaws and the spirit to do whatever we want. In the Heat of the Night is a terrific little bit of detective fiction, full of at the time progressive politics that at the very least becomes an interesting time capsule of the era’s views. And, hey, Cool Hand Luke is great, who doesn’t want to watch Paul Newman eat an upsetting amount of eggs? But, when it was all said and done, I couldn’t deny the fact that my favorite film of this whole bunch had to be the Producers, the monumental story of a bunch of idiots failing upwards.

By 1967 Mel Brooks has already established himself as purveyor of off-beat comedy through his writing on the Show of Shows and Get Smart. But, he decided to make his first foray into the world of movies off of one simple idea. Shady producers trying to make a musical called Springtime for Hitler. This was apparently the initial seed that Brooks began working on, and ended up fleshing the rest of it out based on his own experiences. Brooks had met people exactly like the unscrupulous Max Bialystock, and around that character created a story he intended to work as a novel, until he realized there was far too much dialogue, and not enough plot. So, the story evolved into a play, which he intended to become an incredibly meta play about a play. But, while shopping the play around he ended up impressing a movie producer named Sidney Glazier who bought the play with the intentions of turning it into a film. And, as the production began to ramp up, Brooks himself took the reigns of the film, becoming a first-time director. Brooks was given a shockingly low budget and time-frame to get the film made, which was made all the most stressful by the fact that Brooks didn’t fully know what he was doing. But, he did it. And the studio hated it. They thought it was too tasteless, and sought to bury it. Until the film was saved by an unlikely hero. Peter Sellers apparently got a hold of a print, loved the film, and started hyping it up, getting the film to be released and become the classic that it is today. And, just like most of the movies I talk about here, the film was a huge failure upon release. People thought it was sloppy and a little too tasteless to feature so many gags about Hitler a mere 23 years after the end of World War II. And yet, as the years have gone on, the film has only gained in stature, taking on the mantle as one of the greatest American comedies of all time, and launching the wonderful career of Mel Brooks.

The Producers tells the story of two men, Max Bialystock and Leo Bloom. Bialystock is a Broadway producer that has fallen on hard times, forced to sleep with old rich widows in order to make the money necessary to put on what few plays he can produce, almost all of which result in failure and financial ruin. Which is where Leo Bloom comes in. He’s a young, neurotic accountant who has been assigned to help Bialystock with his books. Bialystock reacts to this in an incredibly hostile manner, pushing all of Bloom’s buttons and pushing him to find a less than legal way out of his current financial situation. And, perhaps because of that prodding, Bloom realizes something surprising. It would technically be more profitable to make a flop than a success, if you’re willing to do illegal things. Basically, if you raise more money than the play is worth, and it fails immediately, you won’t owe anyone their share of the rewards, because there is none, and you could theoretically pocket the excess money. Bloom thinks of this as a accounting exercise, but it immediately draws Bialystock’s attention. He becomes adamant that he could pull off such a scheme, with the help of Bloom. Bloom is aghast by this proposition, not wanting to do anything illegal or even somewhat deviant. But, Bialystock becomes convinced he could convince Bloom to come to his side, and after a ridiculous day in Central park full of hotdogs, balloons, and merry-go-round rides, Bloom ends up thinking of Bialystock as a friend, and agrees to help him defraud people.

Which means they need to find a script so terrible that it will be a guaranteed flop. The two begin reading every script they can find, and eventually hit the mother-load. Springtime for Hitler: A Gay Romp with Adolf and Eva at Berchtesgaden. It’s an incredibly pro-Hitler musical written by an ex-Nazi named Franz Liebkind. The two agree that such a play could never succeed, and they end up reaching out to Liebkind. He’s thrilled to find people as passionate about Hitler as he was, and agrees to sell them the play. And, with a terrible script acquired, they next seek out a director bad enough to make it. They end up finding Roger De Bris, a director with a terrible track record for success, and they’re able to convince him that it’s an avant garde piece of theater that will make his career, earning his help. Bloom and Bialystock then get themselves involved in the casting of the play, along with De Bris and Liebkind, and slowly start to push the play in the absolute worst direction. Including hiring a burnt out hippie who goes by L.S.D. as their lead action, a man who seems to have no acting or singing experience. So, with all the pieces in play, Bialystock starts hitting the streets, and ends up selling 25,000% of the play, which will earn them a massive amount of money once Springtime for Hitler closes on its first night.

There’s just one problem. The play doesn’t become a failure. On opening night Bloom and Bialystock sneak out, spending the run-time getting drunk in a nearby bar, assuming that everything will fall apart. And, it almost does. After the titular opening song ends the crowd prepares the leave in disgust, but the sheer incompetence of the entire production ends up convincing the crowd that it’s actually supposed to be a cutting satire. The lackluster direction, acting, and writing are too bad to possibly be taken seriously, the the play becomes an absolute laugh-riot, becoming the most popular new musical on Broadway. Which isn’t exactly what Bialystock and Bloom were anticipating. They attempt to take their money and flee the country, before running into a furious Liebkind, who wants to kill them for ruining his play like this. But, the three end up coming to an agreement, and decide to do something that will solve all of their problems. Blow up the theater and cause the production to be shut down. Unfortunately, something goes wrong with their plan for the first time, and the explosion ends up going prematurely, getting them caught before they can escape. The trio are then sent to prison for all their various arsons and frauds, where Bloom and Bialystock get to work pulling the exact same scheme with a new musical inside the prison. 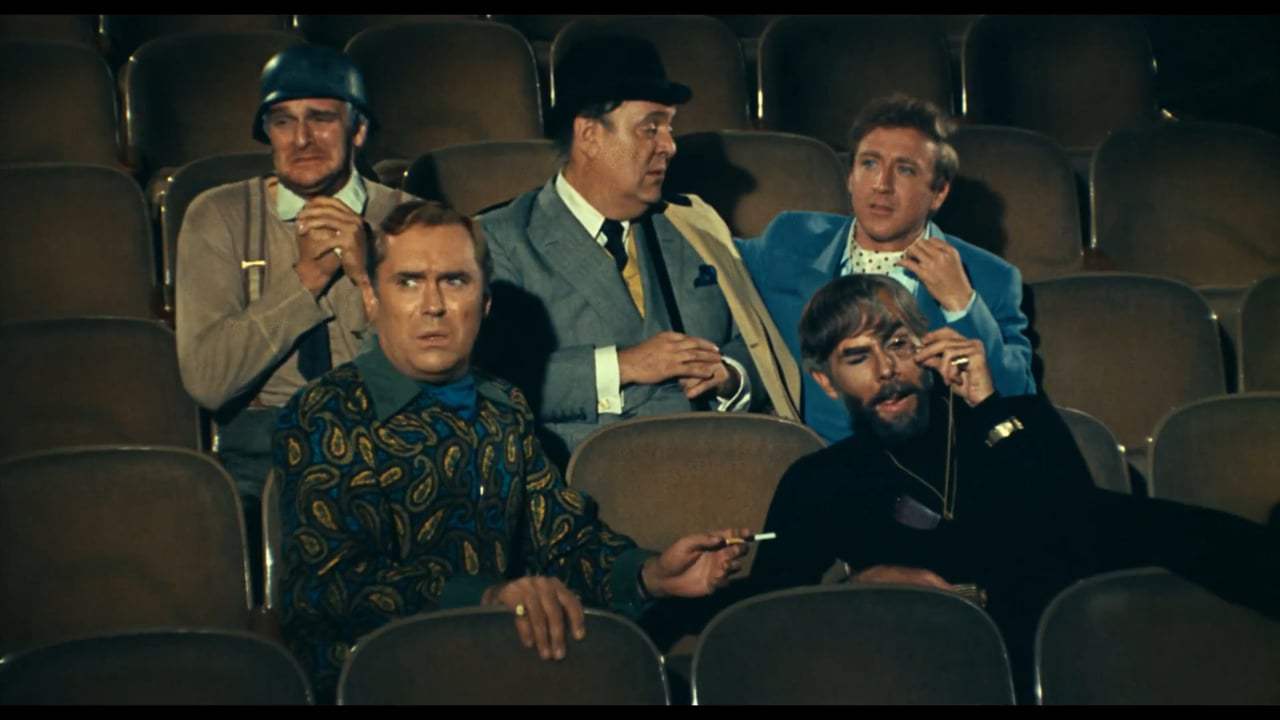 I love Mel Brooks. His movies rank among some of the funniest ever made, and while this film doesn’t exactly fall into line with the rest of his filmography, not really serving as a parody of anything in particular, you can tell from watching this what a singular talent he is. The Producers is a wonderfully hilarious film, pulling no punches and telling the story that Mel Brooks clearly wanted to tell. It’s a tight, biting, and absurd little satire that contains some of the funniest scenes in American cinema. I mean, there are few things that can make me laugh more than the shot of the entire audience in slack-jawed horror after watching the first song in Springtime for Hitler, Gene Wilder happily holding a balloon, or Zero Mostel’s furious bafflement at how they made a successful play. It’s a film that could only be made by someone intimately familiar with the weird ways our entertainment is made, building on a lifetime of strange experiences and stories to give us a movie reminds us how amazing it is we get any good stories, because there’s so much working against creators, even when they’re trying to succeed.

When viewed in the mindset of 2018, the Producers, and the vast majority of Mel Brooks’ filmography, would probably be seen as problematic to say the very least. It makes light of Nazi Germany, the only female character is a basically non-thinking sex object, and its jokes towards homosexuality are pretty broad. I’m a big proponent of the idea of historical context, and that it’s unfair to judge a film from the past based on the standards of the present. It doesn’t excuse anything, but it re-contextualized it, and hopefully explains it. Cultural norms are constantly in flux, so of course a comedy that was trying to be edgy in 1967 wouldn’t exactly line up with progressive ideology in 2018. But, one things I’ve always been fascinated about the works of Mel Brooks is the idea that while he was frequently tasteless and offensive, it was almost never hateful. Brooks isn’t a mean creator, someone taking shots at the little guy. Instead, his entire filmography seems to be based on the premise that nothing is sacred. Not the stuffy world of theater, not the great genres of cinema, and not the most popular films of all time. Everything can stand to be taken down a peg or two, and nothing is above some playful mockery. The Producers is probably the single Brooks film that takes place the most in our reality, nothing too outlandishly heightened, and it ends up being a fascinating little time-capsule of 1967, not idealizing the past, not attempting to give a sanitized or hopeful view of the world, but a story about the present, showing us what was funny then can still be funny today.

The Producers was written and directed by Mel Brooks and released by Embassy Pictures, 1967.