Over the three decades the Simpsons have been on the air certain tertiary characters have become surprisingly frequent fodder for episodes. Character that you maybe wouldn’t think could sustain the shocking amount of episodes that revolve around them have managed to pull out pretty huge numbers. And one of them is Krusty the Clown. He’s a character I enjoy, but when you really sit back and realize how many episodes that have revolved completely around him, it kind of blows your mind. So, here’s another one.

The episode begins in the tense newsroom of the Springfield Elementary School newspaper, with Principal Skinner marching in to give them some bad news. The paper is losing money…somehow, and he wants to bring in a new editor to replace Lisa and make things more profitable. For a newspaper that is presumably free? Anyway, Billy Eichner comes marching in and immediately starts shaking things up, firing everyone and announcing that the school newspaper is now a terrible click-bait BuzzFeed knockoff.

Lisa is obviously not excited with this idea, and stands up for journalistic integrity, which earns the fury of Billy Eichner, causing him to give Lisa the most embarrassing and shameful job available. A television recapper. That’s right folks, this episode is full to the brim with scathing hatred for people who recap television shows, just hammering in the fact that this season of the Simpsons really is making finishing this project a chore.

Lisa then gets to work trying to recap television and come up with insights and opinion into it, and finds that she’s terrible at it. But, while watching an Itchy and Scratchy episode where Scratchy gets turned into shwarma she notices that Homer seems to be a natural at it. He’s able to speedily craft some opinions, and Lisa decides to pawn this new job off on Homer, letting him recap the Krusty show for her.

And, for some reason, Krusty ends up reading this recap of his show, and becomes absolutely furious that Homer only gave it a B-. Which, raises a lot of questions. Why is Krusty reading an elementary school newspaper? Why is Homer publishing these recaps in his name and not Lisa’s? Why does Krusty think his show is better than a B-? None of these questions get answered, but Krusty continues reading Homer’s recaps, getting more and more furious as the scores get lower and lower.

This eventually reaches a point that Krusty has decided to murder Homer. He waits outside the Simpson’s house, and when Homer leaves in the middle of the night he starts following him. The two get in a crazy car-chase, all while Homer is recapping the experience, much to Krusty’s fury. It even reaches the point that Krusty starts strangling Homer out of his own car window, causing them both to get in a massive car-crash.

Bart then somehow gets to the scene, almost immediately, and goes straight to Krusty. Bart decides that Krusty needs to get out of there before the police arrive, and the two go fleeing into the woods while the EMT’s work on saving Homer. Krusty needs somewhere to hide out until the heat goes down, and Bart has a pretty clear idea. Krusty should join a circus and be a clown!

Krusty is pretty put off by this idea, not really wanting to be a circus clown, but he accepts that it’s the only immediate answer. So, with Bart’s help, Krusty disguises himself as a different clown, auditions, and immediately gets the job. Which means that Krusty is going to have to learn how to be a real clown, not a television clown, which he learns is one of the most shameful things a clown can be, at least according to the other clowns.

While Krusty is getting used to his new life, Homer has healed from his terrible car accident, and gets a surprise visitor at his home. Comic Book Guy and some random other lady are there, representing a clickbait site of their own. They want to hire Homer to be a recapper, because it’s awesome that he was so mean a creator tried to kill him. Homer accepts, but because it’s Peak TV, he has to begin reviewing 30 shows a night, which slowly starts to drive him mad.

All Homer does is watch TV, basically nonstop, while tossing out increasingly tired and poor opinions, just to keep himself above water. And, this really starts to distract him, to the point where he becomes a shell of a man. Marge tries to seduce Homer one night, to bring some spark back to life, and he finds himself recapping their sex, against his will. Which Marge does not appreciate.

Back at the circus, Krusty is getting ready to perform his first show in front of a crowd. And he does terribly. He misses all of his marks, gets stuck in a clown car, and causes a pretty severe lion mauling, until everyone but Bart in the audience leaves. And, the next day, the ringmaster fires Krusty. He and Bart prepare to leave the circus grounds, while Krusty laments that he’s a terrible clown.

But, before they can get too far the Ringmaster stops them, seeing if Krusty would be willing to do an incredibly dangerous tightrope act, because no one else will. Krusty agrees, because he’s drunk and sad, and gets ready to pull off a very dangerous stunt. And, it goes wrong. But, in a hilarious way. He gets up to all sorts of clowny shenanigans, and really amuses the crowd, giving Krusty a massive dopamine rush. 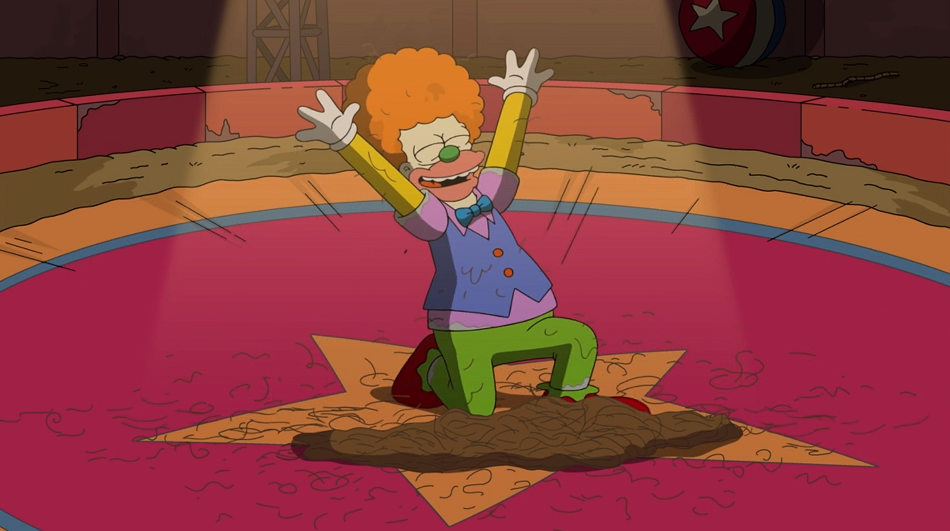 Because of the performance he gave the ringmaster hires Krusty as a permanent comedic tightrope walker, and he begins a new life as Soggy the Clown. And life is good. He’s the star of the show, people love him, he has friends, and he’s started a relationship with the bearded lady. So, when Bart comes to tell him that he found an even better fake job to hide out in, Krusty refuses, preferring his new life.

Before we see how that plays out though, we need to finish off that Homer plot. Because he ends up resigning from his recapping job after the Marge thing, only to be poached by the CEO of a massive media conglomerate. They don’t want him to quit recapping, because they want him to get involved in a complicated conspiracy. Apparently they are making fake television shows in order to con people into paying for subscriptions to streaming platforms, and they want Homer to write mediocre reviews for the fake shows so that people don’t try and watch them and realize they’re fake. Incredibly complicated. But, Homer was recording the whole meeting, so he leaves to recap their conversation, and bring down the conspiracy.

And, with that out of the way, we then hop back to the circus to learn everything is falling part. The circus is being sued, because circuses are terrible, and they’re having to close down. Unless they can get $50,000 in order to buy a new name and start over as a new circus. And, it’s a good thing that that’s the amount, because that just so happens to be what Krusty’s current bounty is worth for running Homer off the road.

So, Krusty has the Ringmaster turn him in and get the bounty, while facing the court for his punishment. But, the jury finds him non-guilty because they too hate recappers, the lowliest of the low, and he’s free to go and rejoin the circus. Until he learns that they don’t want him back. Once they learned he’s a television clown they lost all respect for him, and they want nothing to do with him, despite him saving the day. The circus folk abandon Krusty, and he goes back to his sad show. But, he starts getting A’s from the recapping websites, because Ralph is writing them, so he’s fine with it now.

This episode is fine, I guess. Nothing too objectionable, just nothing special. Krusty is usually a character that I enjoy, but for whatever reason this plot just didn’t do too much for me. The idea that Krusty the Clown has to join a circus and be an actual clown is a premise I’m utterly shocked has never been used on the show, and I think it should have been funnier. But, there just wasn’t much to it. And, honestly, I think part of it might have been the fact that Krusty was so into it. I just don’t think I like a positive Krusty. But, if he’d just been miserable the whole time I don’t know if it would have been any better. Plus, we get that really irritating B-plot about the TV recappers. Listen, I’m not going to stand here and say I was offended that the show was taking a shit on people like me who write about TV shows, because I’m under no pretense that this is some sacred and artistic thing I’m doing. But it just felt weirdly vindictive. Who cares about people writing about episodes? Does the concept of TV recappers really piss the writers off so bad that they’d make it a plot in an episode? That just seems weird to me, and just more evidence that the Simpson’s writers have fostered a weird hatred for “the kids today.” They’ve been putting out plots yelling about “safe spaces,” TV recapping, social media, and all sorts of other things that just are starting to come off as them being mad at a world that’s changing. And it’s not a good look.

Krusty the Clown was written by Ryan Koh and directed by Matthew Faughnan, 2018.

Tagged as: 2018, Krusty the Clown, Lifetime of Simpsons, Season 30, the Simpsons