The Ballad of Buster Scruggs and the Tall Tale

Over the course of their illustrious career, the Coen Brothers have gained the reputation of being creators that are hard to figure out what they’re going to do next. Their films have a general aesthetic to them, but within that aesthetic they’re able to tell stories that run the gamut of tone, as well as jumping between a whole litany of different genres. And, there seems to be no rhyme or reason to what type of stories they’re going to do. They can go from a deathly serious story of what it was like to be a folk singer in the 1960’s right into a goofy farce about movie stars, or from a rambling and folksy retelling of the Odyssey into a pitch-black neo-noir about a barber. Really the only thing you can expect from the Coen’s is an incredibly well-made film that you’ll love. Outside of that, it could be literally anything. So, we shouldn’t have been surprised that their latest film ended up being a scatter-brained anthology film that told six disparate stories set in the Old West, that went straight to Netflix, and was the subject of quite a bit of confusion regarding it’s actual form. I don’t know if this is something that was widely know, or I’m only aware of this because I spend far too much time on the internet reading about movies, but for the longest time this film was reported to be a miniseries, with each of the segments being episodes. I’m still not quite sure if there was ever any veracity to that idea, or if it was just a misunderstanding, but whatever the case, it certainly added to the mystery of this film. I had no idea what to expect walking into the Ballad of Buster Scruggs, but what I got was quite a lot of fun.

The film is an anthology, with six different stories told without any real inter-connectivity. There’s a slight frame-story that all of these come from a book of stories about the Wild West, but it’s never really used. The first story is the titular “Ballad of Buster Scruggs,” which follows a singing cowboy/outlaw named Buster Scruggs as he rides his horse around, getting into violent scrapes and murdering just about everyone he comes in contact with, all while singing little songs. Unfortunately, his reign as the fastest gun in the West comes to a halt when he encounters another singing cowboy in a small down, and pretty quickly loses a duel, but not before giving a posthumous duet. We then head into “Near Algodones,” the story of a young outlaw with truly terrible luck. He attempts to rob a minuscule bank in the middle of nowhere, only to be bested by the elderly bank teller in his pots and pans suit of armor. He’s then brought to a tree where he’s to hung, only to survive an attack from some Comanche that leave his captors dead. He’s saved by a man who comes across his attempted hanging though, only to find that this man is a cattle rustler, leaving the outlaw to blame when the law catches up with them, where he’s brought back to town and finally successfully hung. Which brings us to “Meal Ticket,” and incredibly dark tale about two entertainers, travelling the West in search of paying customers. The leader is  stoic Irishman who carts around a young man who is missing his arms and legs, and who is able to recite stirring speeches. They travel around, garnering smaller and smaller crowds, until their entire career starts to fall apart. And this culminates when their crowd is absolutely dwarfed by that of a chicken who can do math, leading the Irishman to buy the chicken, then tossing the young man off a bridge, starting his new life as a chicken promoter.

Next up is “All Gold Canyon,” a story that follows a lonely old prospector who stumbles upon a picturesque canyon. He and his faithful donkey head into the canyon, which becomes void of all life as soon as he gets there, and begins searching for gold. It becomes clear that there’s a mother load in the canyon, and after days of searching he finally finds it. Just in time for a young man who had been following him to arrive, shoot him in the back, and try to take the gold. But, the prospector is able to survive, and fights the young man to the point where he’s able to kill him, getting out of the canyon with the gold. We then move to the longest segment of the film, “The Gal Who Got Rattled,” which tells the story of a young woman named Alice Longabaugh, who heads out on a wagon-train with her ineffectual brother Gilbert and their dog President Pierce. Unfortunately, shortly after heading out in the train, Gilbert dies, leaving Alice alone on the train with no money and no idea how to survive in the world. She ends up befriending one of the men who runs the wagon train, Mr. Knapp. Knapp helps Alice with a lot of problems, and the two end up growing very close, to the point that Knapp ends up proposing to her. They begin planning a new life together, until Alice ends up wandering off with President Pierce one morning and comes across an Indian war-party. Knapp’s partner, Mr. Arthur, comes to her rescue, but when things get dire Alice ends up killing herself, thinking that she’s about to be murdered, leaving Arthur to tell Knapp what happened. Which gives us our final story, “The Mortal Remains,” which tells the story of five people riding a stagecoach. There’s a pair of bounty hunters, a lonely trapper, a stodgy old woman, and a French gambler. The five of hem tell stories and debate the point of morality, before gradually realizing that they may actually be dead, and this wagon is taking them to their afterlife. 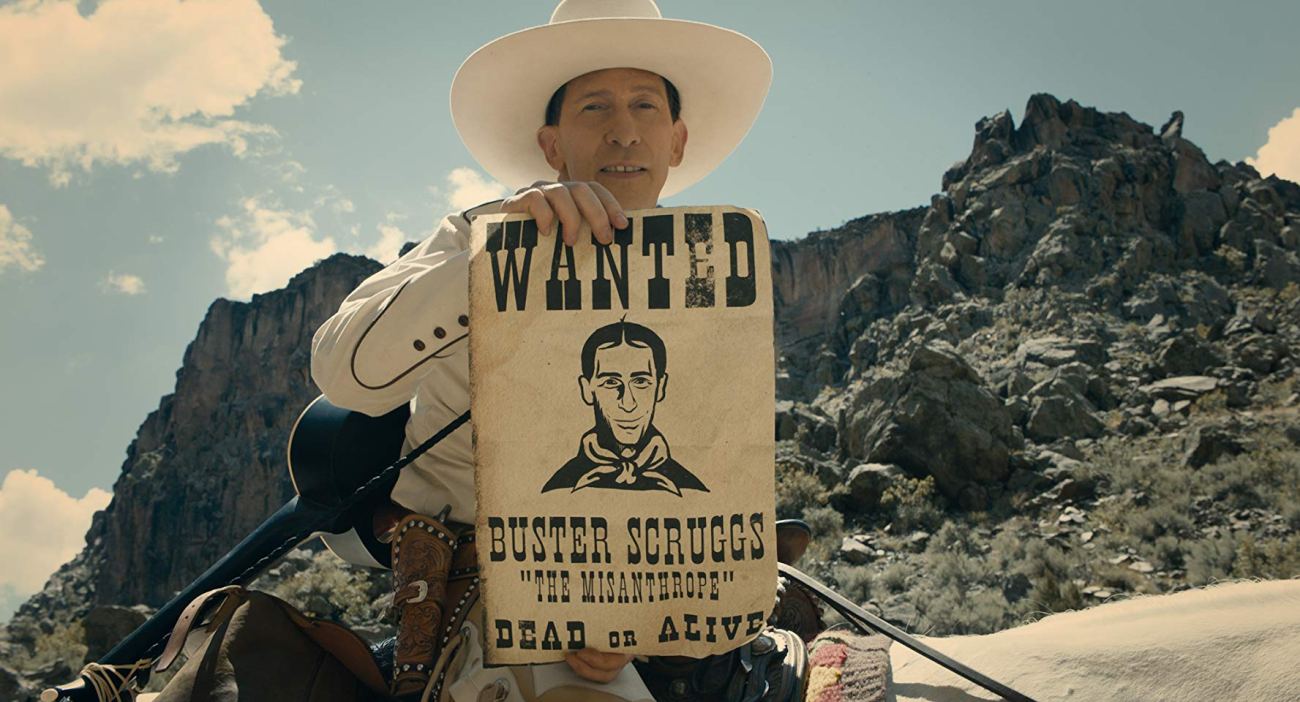 Anthology films have never really clicked for me. In theory they can be great, short little stories that can get straight to the point of the narrative, giving us a series of smaller scale stories that can give us different perspectives in a single narrative. But, usually in reality they end up being pretty disappointing, often coming off as stories that couldn’t be worked into full narratives, or giving you a pretty lousy rate of success, sitting through an entire movie where only one of the stories is actually any good. And yet, the Coen Brothers kind of knocked this out of the park. There are stories that work better than others, but for the most part I enjoyed myself thoroughly the entire time. The stories are all very different, sporting varying themes and even tones, just like the Coen’s entire filmography. If you’re in the mood for something screwball and goofy, you’re covered. If you’re in the mood for something darkly ironic, you’re covered. If you’re needing something tragic, they have that. Every actor in this movie seems to be having the time of their life, getting to be tossed into the weird minds of the Coen Brothers and live out their Western dreams, giving us a collection of characters and stories that feel larger than life, showing us the breadth of the Wild West while reminding us that death lurks behind every corner.

Which is probably the thing I walked away from this film feeling the most intrigued by. The movie is kind of all over the place, telling stories that have very little in common, other than the general aesthetic and the knowledge that these people are probably going to die. But, as you watch the film, getting swept up in the almost mythic stories that these characters are fulfilling, the thing I was most reminded of were the old Wild West tall tales you learned as kids. The short morality tales that felt like a hybrid of Aesop and Wild Bill Hickok, giving distinctively American twists to fairly universal concepts. And this film felt like it was cut from the same cloth, giving us six new stories that could be entered into the pantheon of the Tall Tales. Much like the Western genre itself, this film doesn’t get constrained by any specific rules or guidelines, just serving as an aesthetic framework in which to tell interesting stories. This film gives us six very different stories, with very different vibes, all of which are held together by the world of the Wild West, and the assurance that we’re all going to die, some of us in more tragic or ridiculous ways than other. And it’s that sort of mythological rhapsodizing that I was hoping from the Coen’s, giving us what may be their final word on the Western genre.

The Ballad of Buster Scruggs was written and directed by Joel and Ethan Coen and released by Netflix, 2018.