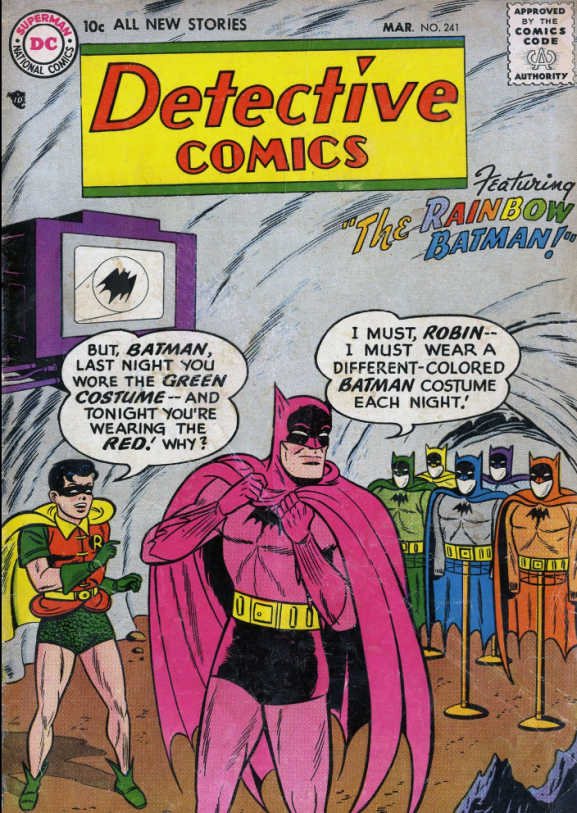 Hello everyone, and welcome back to yet another installment of Bat Signal, my never ending quest to read every issue of Detective Comics, in random order, and with basically no context. And we have an interesting story to talk about today, folks. Because, as you may be able to tell, we’re talking about a fairly famous issue of Detective Comics today. Or, one with a famous cover at the very least. Comic covers from the Golden Age are often incredibly strange, and have been adopted by irony-loving people on the internet as perfect encapsulations of the weirdness of early comics, without any actual context. That took the form of people laughing at the apparent dickishness of Superman for a while, but Batman took his fair share of mockery for the bizarre covers of the Golden Age. And this issue is one of the more famously weird covers of them all. I just had no idea that this was the plot that actually was attached to it.

The story begins in the streets of Gotham one afternoon while Dick Grayson is wandering around, minding his own business. This is spoiled when a car full of gangsters comes screaming down the street, barreling towards a small girl. Dick doesn’t have time to change into his Robin costume, so he just leaps towards the girl, saving her, and smashing his arm into a light pole in the process. Some police officers and a doctor arrive, and Dick ends up becoming a big story, getting interviewed on the news for his heroics. Which is a bummer for Dick, because it turns out that those men had just stolen a new television camera, and he’d been hoping to identify men who stole it, since he got a good look at them before he had to jump out of the way. But, when he gets home and tell Bruce all about it, Bruce says that he has a plan. The two reason that the men aren’t going to be able to sell the camera they stole, so they must be planning on using it as a prop so that they can pretend to be cameramen and steal something that’s going to be televised. So, they decide to attend every televised event in Gotham for the foreseeable future, in order to catch them. Bruce also decides to do something that remains unexplained until the last page of the issue. He gives Batman a new wardrobe.

Yep, Batman’s wearing a red costume! He and Robin showed up to this ticker-tape parade, ominously driving around in the Batmobile, while Batman sported a new look, drawing everyone’s eye. The spend the entire event just looking around, checking all the cameramen, before leaving without any answers. And, it’s not an isolated incident. Batman and Robin begin appearing everywhere that cameras are present, and each time Batman’s wearing a different costume. Such as when the arrive to news that a truck full of explosives has caught fire in town, causing Batman to race onto the scene in a powder blue costume, before hopping into the flaming car and driving it off a pier before it could explode.

And, things just keep going from there. Batman and Robin arrive at the Gotham City airport when a famous movie star land, only for Batman to out-shine her in a glittery gold costume. Batman shows up at a fancy auction house in an orange costume that draws everyone’s attention to the point that the proprietors kindly ask him to leave, since now one’s paying attention to the wares. And, he shows up in emerald green at the dedication of a boat, only to spot some sabotage. Batman has begun to worry that whoever stole the cameras has noticed his continues presence at televised events, and decides to draw them out with his next stunt. Because the next day, at some sort of televised sharpshooting contest, Batman shows up wearing a costume that looks like this.

So, Batman’s shown up to a shooting contest dressed as a human target, which of course draws quite a bit of attention. And, as the firing begins, he even ends up drawing a bullet. Luckily, Batman was using the same thought process as the Punisher, and was wearing a sheet of steel under his target, blocking the bullet. But, he and Robin were able to identify that the shot came from a nearby building, not one of the contestants. They aren’t able to catch the men, but Batman deduces that if they’re so frustrated with his constant appearances that they’d try to murder him in broad daylight, their plan must be about to be sprung. And, there’s only one more major televised event coming up, a special exhibit at the museum about the history of money, complete with a display of a million dollars in cold hard cash.

The exhibit becomes a major event, drawing in a whole lot of people and press. And, of course, Batman and Robin. But, swinging for the fences, Batman arrives in a rainbow print costume, obviously making every person in the room look at him instead. And, while everyone is gawking at Batman, Robin finally recognizes one of he men he saw in the car. Batman lunges at the man, knocking him out, and is surprised to find a gas mask on him. He and Robin then go from camera to camera, until they find one that had been boobytrapped with a bunch of tear gas. And, with their plot figured out, the rest of the criminals attempt to beat up Batman, only to get swiftly defeated. So, with the case finished, the assembled Gothamites beg Batman to tell them why in the world he’s been dressing the way he has. But, he refuses to tell them, instead heading back to the Batcave with Dick, where they explain things to the reader. And this is where we find out that the reason Batman had been dressing so garishly was so that everyone would notice him and not Robin, who was still nursing his wounded arm, so that people wouldn’t put two and two together and figure out that Robin was Dick Grayson. Which…sure is a weird plan, Batman. But, I’m not the World’s Greatest Detective, so I guess I can’t fault him.

As is often the case with Golden Age comics, the weird story that was promised on the cover wasn’t really fulfilled with the actual contents of the book. I mean, yeah, we did get a story where Batman had to wear a variety of garish costumes, but the actual reasoning why ends up being incredibly disappointing. And, weirdly enough, it ends up becoming the only mystery of the entire book. The comic just cuts out an earlier part of the story where Bruce and Dick come up with the plan, leading the reader to wonder what’s going on for the entire story, because nothing else was delivering any sort of mystery or stakes. The actual crime they were solving wasn’t particularly engaging, and really just resulted in Batman and Robin wandering around for days on end, not getting anything accomplished, besides confusing the people of Gotham and the reader. I don’t like Batman stories where the mystery is impossible to solve because the story itself was withholding information, but I really don’t like stories that remove a crucial piece of information, and act like it’s a twist when that information is finally revealed.

“The Rainbow Batman” was written by Edmond Hamilton, penciled by Sheldon Moldoff, and inked by Stan Kaye, 1957.