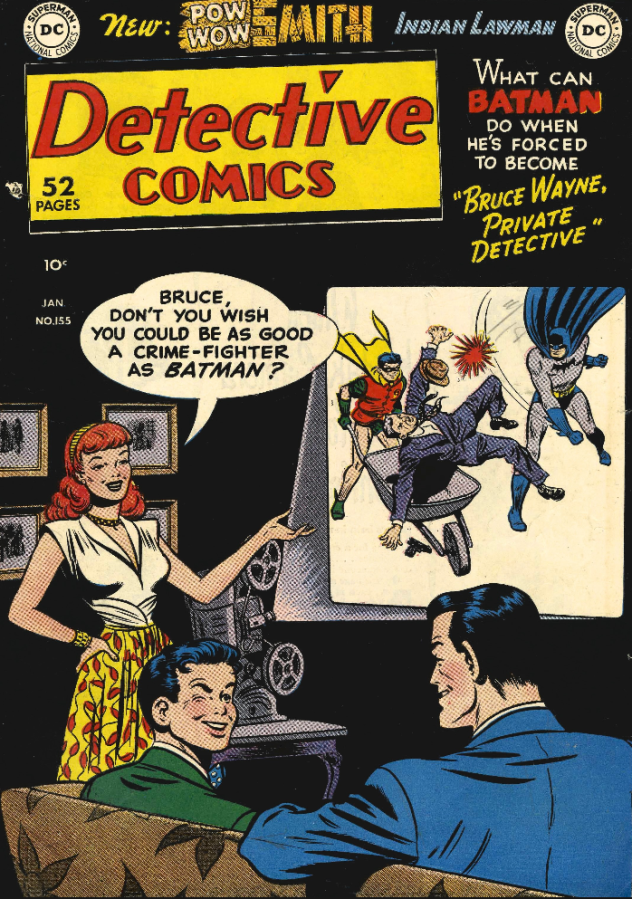 Hi there everyone, and welcome back to yet another installment of Bat Signal, my ongoing project to read every issue of Detective Comics, in random order, and with basically no context. And we have a really goofy and fun little issue to talk about today, folks. We’re taking a trip back to the end of the Golden Age, the time period in comics where no one had any idea what to do and were just throwing every conceivable idea at the wall to see what could possibly stick. More often than not this ends up creating some really lackluster stories, but today we get to see the rare case where that desperation and randomness works out. Because we get to talk about Bruce Wayne being forced into becoming a private eye, outside of his career as Batman. That’s a premise that just about ensures wacky hijinks. But what you might not anticipate is a whole lot of talking about trains. Let’s go!

The story starts off with Batman and Robin giving famous photographer Vicki Vale a private tour of the Batcave. Specifically they’re showing off their vast trophy room where they keep the spoils of their cases so that Vicki can photograph them for the magazine she works in. She gets shown a lot of fun artifacts, including what appears to be a pretty regular model train. Batman explains that the train came from a case where he was taking down a criminal named Tracks Carlin. Carlin ended up throwing his model train at Batman, out of desperation, only to trip on it and knock himself out, ending his illustrious criminal career. And, with the pictures taken, Batman and Robin blindfold Vicki and guide her out of the Batcave so that she can make it to a date with Bruce Wayne. And that date doesn’t go great, because Vicki spends the entire dinner telling Bruce how awesome Batman is, and how terrible he is by comparison, until Bruce makes the mistake of saying that he could be a detective if he really wanted to. Because Vicki Vale is apparently nuts.

So, yeah. Vicki Vale has decided to call Bruce on his bluff, and has forced him to become a private eye while a legitimate detective recuperates from appendix surgery. And, for some reason, Bruce doesn’t just announce that this is insane, and instead gets to work as a private eye. Now, you may assume that Bruce would then do an incompetent job, further pushing the idea that Bruce Wayne couldn’t possibly be Batman. And you would be wrong. Because Bruce Wayne quickly becomes the greatest private eye in history, stopping a jewelry theft, finding a deadbeat dad who skipped out on his family, and saving a man’s life from an assassin! And, all in a week! But, it still doesn’t really impress Vicki, who basically just chocks it up to beginner’s luck and then runs a story in her magazine about Bruce’s weird little story, right next to her collage of Batman and Robin’s trophies.

And that was a mistake! Because the next day while Bruce is sitting around in his borrowed office he gets approached by a man named Frank Kelcey. Kelcey is an architect, and apparently a collector of model trains. He wants to buy Tracks Carlin’s train that Vicki took a picture of, and wants to hire Bruce to be the intermediary. Bruce thinks it’s kind of odd, but agrees. And, as soon as Kelcey leaves the office another man, a lawyer named Tilley arrives also wanting the train. This obviously raises some red flags, especially when Tilley straight up threatens Bruce if he doesn’t give him the train instead. So, figuring that there’s something up with the train, Bruce returns to the Batcave that night where he and Dick take it apart, looking for hidden treasures. But, there’s nothing. It appears to be nothing but a normal model train. And, to figure this conundrum out, Bruce decides to have Dick deliver a duplicate train and keep an eye on how he reacts.

Kelcey is able to tell right away that the train is a phony, all because it’s actually able to run. And, Batman’s pretty curious about that. He starts interrogating Kelcey, trying to get the truth about this train thing, when he gets bashed in the back of the head by Tilley, who has crept into the room. The two men then toss Batman into a massive wind tunnel that’s apparently in Kelcey’s basement so he can test model skyscrapers, figuring that the Dark Knight will then be chopped to bits by the fan inside.  So, Batman wakes up to find himself slowly being drawn into a giant whirling fan, with no real way out of the situation. He then does the only logical thing he can do. He takes off his gloves and throws them into the fan so that they fan will spit out the tattered remains of his glove into an alley outside Kelcey’s building where Robin is waiting, letting him know that things are amiss. Sure, why not. This works, and Robin is able to free Batman right before getting chopped up.

The Dynamic Duo then speed back to the office of Bruce Wayne, PI, where they assume Kelcey and Tilley will show up next. Bruce takes off his costume just as there’s a knock at the door. But, surprisingly, it’s just Vicki Vale. And, as soon as she knocks Bruce off his guard, the two villains show up and take her hostage, demanding that Bruce give them the real train. The one that doesn’t work! So, thinking fast, Bruce throws the train at the light-switch on the wall, turning the lights out. The villains then grab the train and flee, letting Bruce make sure Vicki is alright. And, once that’s done, he quickly suits back up as Batman and gives chase. Luckily, they’re still outside and Bruce is able to chase them down, knocking them out and getting the train back. So, what’s the secret to the train? Well, apparently a wire connected to the battery isn’t a real wire, and in actuality has some encoded message that can be used on a record player to reveal a recording of Tracks Carlin detailing a whole bunch of corrupt people in Gotham, including Kelcey and Tilley. So, with the case figured out, Bruce decides to go on another aggressive date with Vicki Vale. 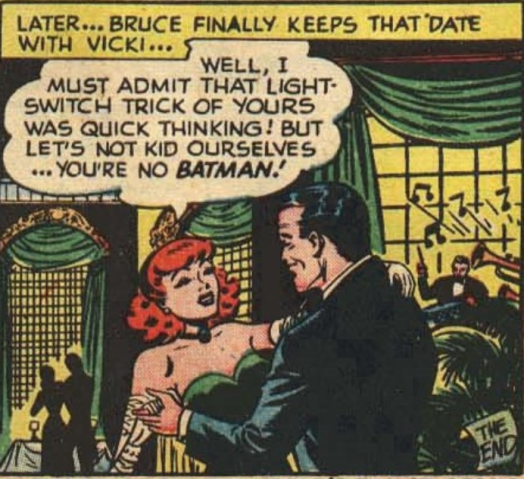 This issue was a whole lot of fun. Comics from this era are really hit or miss, but I think that this one hit incredibly well. The idea that Bruce Wayne has to become a private eye, instead of just refusing Vicki Vale’s insane request is weird enough. But when you then throw in the idea that Bruce couldn’t help himself from being the World’s Greatest Detective, even when that would be detrimental to his secret identity, is amazing. The whole train scheme is a little weird, especially with the insane reveal that waits until the very end with the wire record, but for the most part I think it really worked. It’s really par for the course for stories from this era, and it works decently enough. But, what keeps this comic from being the usual throwaway kind that I get from this era is the utterly insane detective stuff, which actually managed to do the impossible. It was something I hadn’t seen yet from Detective Comics, which is something I always appreciate. 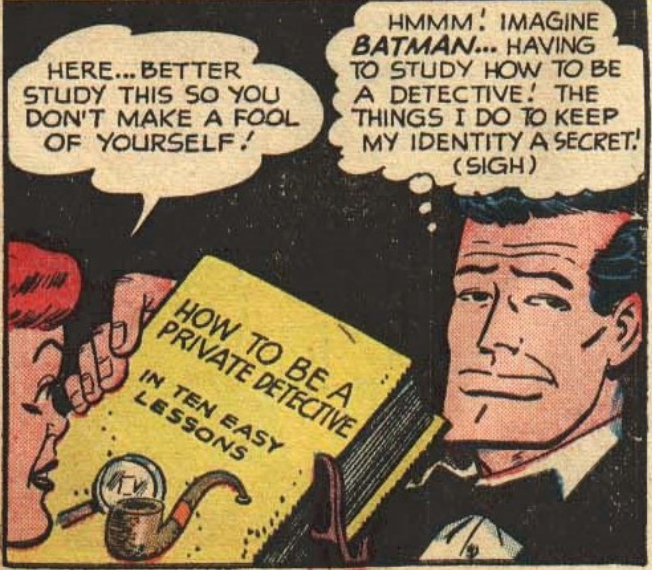