Hi there everyone, and welcome back to another installment of Bat Signal, my ongoing quest to read every issue of Detective Comics, in random order, and with basically no context. And, after a somewhat accidental break last week, we’re getting back into the swing of things with the best kind of story. One that’s the first part of an ongoing tale, meaning we only get a bunch of set-up and no pay-off! And, to spice things up even more, it features a hilariously lame villain. Which, sadly isn’t Poison Ivy, as you might have surmised from the cover. I’d imagine that she’ll play a larger role in the rest of this story, which would have been great, because I’ve literally only had one other story with Poison Ivy during this project, which is a bummer. But, at least she’ll now be tied with today’s villain!

The issue begins at five in the morning at a small park in Gotham City where a mysterious man in a makeshift hazmat suit is wheeling a barrel next to a fountain. Which, would be suspicious anywhere other than Gotham. And, apparently seeing an easy mark, a bunch of gang-members approach the man, attempting to rob…his barrel? I don’t know, but the man panics and triggers a device attached to the barrel. Because, as you probably assumed, this man is a criminal, and the barrel is some sort of chemical weapon. It releases a massive cloud of chemicals, which appear to be rather caustic to the criminals. The cloud then spreads around the park, killing all of the plants in the area before triggering a pretty substantial explosion. The man scurries into his waiting van, and attempts to flee the scene, right as the police arrive to see what’s up with that mysterious explosion. And, unluckily for the bomber, Batman and Robin have also answered the call. Batman and Robin chase after the bomber, only to watch as he slams into a department store. The Dynamic Duo follow the bomber into the building, but he actually manages to avoid them, despite openly wheezing and knocking stuff over. However, it’s not a total bust, because Robin’s able to get quite a bit of data off of the van, hopefully enough for them to track down the identity of the bomber. And, while this is going on, we get a whole bunch of stuff that has nothing to do with this story, but probably makes sense in the larger ongoing narrative, like a contentious mayoral race. But, I would say a solid 20% of the stories I talk about on this site feature a contentious mayoral race, so that’s nothing new.

Things actually start rolling when we see how the investigation is going. The GCPD send two detectives to look into the bombing, assuming that because the bomb was actually a combination of defoliants that could be bought in a commercial setting, that they’re looking for someone with a plant gimmick. And, since Gotham is home to a prominent villain with a plant theme, Poison Ivy becomes a suspect. Which is dumb, because her whole deal is the sanctity of plants. She wouldn’t be involved with the destruction of a whole park. But, who would? Well, we’re then introduced to the actual bomber, a man named Maxwell Veezey. And, why has he created a herbicidal bomb? Well…. So, yeah. Today’s villain, Maxwell Veezey, has severe allergies. And, because this is Gotham City, he’s decided to deal with that problem by becoming a plant-hating super-villain. A totally rational and sane thing to do. And, if we have someone whose making their whole deal that they hate plants and want them to die, you can guess that Poison Ivy is going to have some strong feelings about that. There’s only one problem. She’s currently serving time in Arkham Asylum. But, she’s been on good behavior, earning her some small freedoms. Like being able to run a small garden on the grounds. And, to show off her hard work, she’s made some special salads for the two doctors in charge of her care. Which she’s poisoned. And, as the doctors start to asphyxiate, she explains that she has an antidote for them, but she’ll only give it to them if they let her escape to track down this herbicidal killer.

And, speaking of Maxwell Veezey, things are starting to pop off. Because the police officers of the Major Crime Unit have tracked Veezey down. They managed to find that he bought the hazmat suit he was seen wearing, along with all of the plant-killer, making it pretty obvious. But, when he sees the police arriving at his door, Veezey freaks out and escapes. He’s rigged a truck up with a much larger defoliant bomb, put on his dorky suit, and has decided to start calling himself Allergent. He flees from the police, leaking deadly mist. Which is when Batman and Robin find him again. They give chase, but are unfortunately rather blinded by all the mist coming from Allergent’s van, causing them not to notice that they’re rapidly approaching a draw-bridge that is in the process of being raised. Allergent barely manages to land on the other side of the bridge, and the Batmobile unfortunately plummets down into the river, where Batman and Robin will presumably die. I’m on the record as being somewhat frustrated with issues like this. It’s my own fault, coming up with the ridiculous parameters of this stupid project, but coming across an issue like this, that’s nothing but set up for a larger narrative, can be a little frustrating. Even getting just the ending of a story can usually be better, since there’s actually some sort of payoff. But, this issue gets some bonus points for being so completely ridiculous. There’s a whole lot of weird stuff that I assume will matter later, like the mayoral stuff, and the entire involvement of Poison Ivy, but as it stands this was kind of a funny issue. I mean, we were given a villain who has made it his expressed goal to kill all the plants in Gotham City because he has severe allergies, and then calls himself Allergent. That’s something I’d expect from a Bill Finger comics from the fifties, not one from the late nineties. It’s wonderfully dumb in the best way, and almost makes up for the fact that I didn’t get nearly enough Poison Ivy in this story. 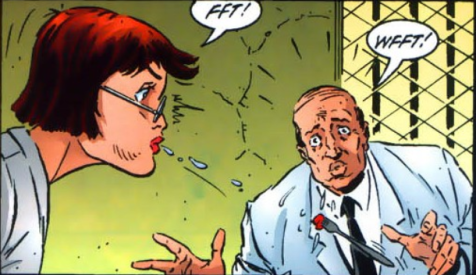