We Sold Our Souls and the World of Conspiracy 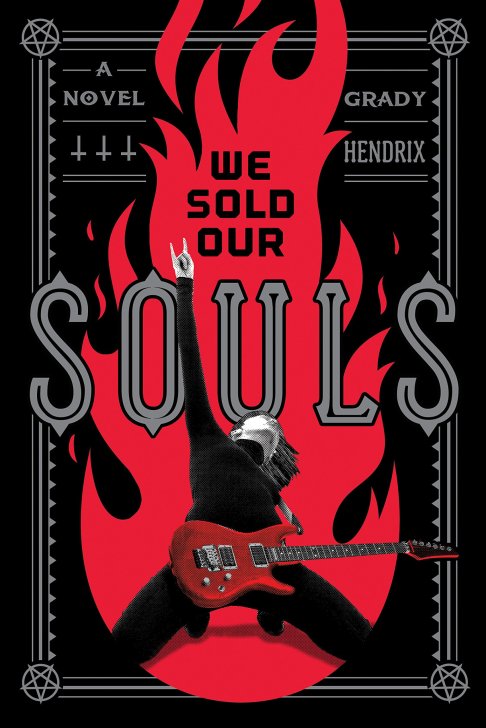 I’m really fascinated with narratives that revolve around one medium, expressed in another. That was probably a vague way to explaining it, but I’ll try to lay it out. For instance, when you have a movie that’s all about music, or a book that’s all about movies. I love seeing someone who is passionate about something bring that passion to a foreign medium, finding ways to express everything they love about it in a form that isn’t really that easy. And, oddly enough, I’ve found quite a few novels that revolve around music and the way that it influences our life, and how important it is to us. Movies can handle music, since they can just play music, but books have a real struggle. Putting the feeling of music into words in ridiculously hard, but when an author can pull it off and tell a story that’s both a satisfying narrative and manages to give some insight into the power of music, it’s one of the more impressive things you can read. And, when you take into account the bizarre mythic stature that music has in America, what with the legends of Robert Johnson and the proliferation of legends and myths surrounding our favorite rock stars, you can see how fun it is to tell stories about the American experience and music. So, when I come across a book that takes a stab at this elusive subgenre I give it a shot. It often pays off. But, sometimes it doesn’t. Let’s talk about We Sold Our Souls.

This novel revolves around a woman named Kris Pulaski, the former guitarist of a 90’s heavy metal band called Durt Wurk. Her band never really went anywhere, and after a particularly nasty break up of the band, she ended up fading into obscurity, starting a rather depressive slide into mediocrity. She ends up working nights at a crappy hotel, slowly being suffocated with the sad reality of her life, until one day she sees a billboard advertising new shows from a band called Koffin. Koffin is led by Terry Hunt, the lead singer of Durt Wurk who broke the band up to sell out as a nu-metal band, thus ruining her life. The sight of Terry is enough to cause her to do something she hadn’t done in decades. She plays her guitar. And, after feeling the power of music again, she decides to go visit her best friend, the other guitarist from Durt Wurk. She has some strange memories missing from the night the bad broke up, and she wants to finally confront them with Scottie. Unfortunately, when she gets to his home things get worrisome.

Scottie has become insanely paranoid, and is convinced that Terry Hunt is constantly monitoring them and trying to ruin their lives. And the only way to save his family is to kill Kris. However, instead he just kills himself. Kris is terrified, and becomes even more so when a group of mysterious UPS drivers arrive and kill the rest of Scottie’s family. Kris manages to escape, and becomes convinced that Scottie was right, and Terry Hunt is trying to ruin her life. She starts to uncover memories that the night the band broke up Terry offered the let the whole band become Koffin, and Kris refused. And, after the rest of the band agreed they were feasted up on by actual demons, since Terry apparently sold their souls for his own purposes. And, with that knowledge unleashed, Kris decides she needs to destroy Terry Hunt. She attempts to get the other two members of the band, Mike and Tuck, to join up in her cause, but they’ve already been won over by Terry, and are on his side. So, Kris becomes a wanted fugitive, heading towards a massive metal music festival going on in Las Vegas which is presumably Terry’s farewell show. She gets followed by massive crowds, is almost killed several times, befriends a young woman whose life goal is to see Koffin live, and eventually comes face to face with Terry Hunt. And, she manages to succeed. She stops Terry from selling the souls of every single visitor of the concert, gives her strange prophetic metal album to the people, and vanishes out into the world, becoming a legend.

We Sold Our Souls didn’t really work for me. I spent almost the entire time I read the book trying to figure out why it wasn’t connecting with me, and I don’t think I ever really figured out what was wrong. It’s a little plodding, gets a little dull at times, and features an almost Tolkien-esque amount of song lyrics. There are some good ideas in it, and I like seeing the conflict of nu-metal versus real metal brought up, but the novel just didn’t work for me. If what I described sounded interesting, you should give it a shot. I’m not trying to say it’s a bad book, or anything like that, it just wasn’t for me.

But, one thing that the book did very well, and the thing I came away most intrigued by, was the way that it handled the vast conspiracies going on within it. The book takes a hard turn into becoming a very different type of book when the conspiracy shows up, and I think that it’s a fascinating element of the book. Because I find conspiracy theories utterly fascinating. The idea that everything in your life is a lie, and that you’re the only person who sees the truth is a horrifying idea. And then finding out that you’re completely right, and it isn’t just paranoia, is honestly one of the most frightening things I can think of. Finding out that you’re literally trying to be silenced for knowing the truth is extremely scary, and I do think that this book expressed that terror in a great way. Kris finds herself adrift in a sea of people looking to capture her, just because she knows the truth. This is kind of everything that people who get into all the insane conspiracy theories like Qanon and the Flat Earth hope will happen to them, but the truth is that it’s probably the worst experience you could ever have.

We Sold Our Souls was written by Grady Hendrix, 2018.