Hi there everyone, and welcome back to yet another installment of Bat Signal, my seemingly never-ending quest to read every issue of Detective Comics, in random order, and with basically no context. And we’re taking a trip to the weird and wild world of 1970’s Batman comics today, folks! This is the period when they were trying to figure out what to do with Batman after his campy heights of the Adam West show, which basically resulted in them throwing everything at the wall to see what sticks. Sometimes he would be a hardboiled detective, sometimes he was a globetrotting James Bond ripoff, and sometimes he literally fought vampires. And this time he gets to fight what might possibly be a Mesoamerican Ghost Rider! Comics!

The issue starts off by establishing that there’s a special event going on in the Gotham City Museum, that Batman has specifically been invited to. And this isn’t really just because people like hobnobbing with Batman like they did in the 60’s, it’s because they’re worried that there will be a robbery. And, since this is Gotham, they’re correct! Batman manages to capture three men who were planning on robbing the museum, and is then able to zip down to the ground, change into his tuxedo, and make a fashionably late entrance as Bruce Wayne. He gets to strut around as Bruce, being a complete asshole. He mocks Commissioner Gordon’s inability to control crime in Gotham, he acts snooty to the help, and confidently admits that he invited two women as his dates. Everything to throw people off the trail of his secret identity. And, after a sufficient amount of shittiness it’s time to look at the reason everyone’s here. A rare relic from Mexico! 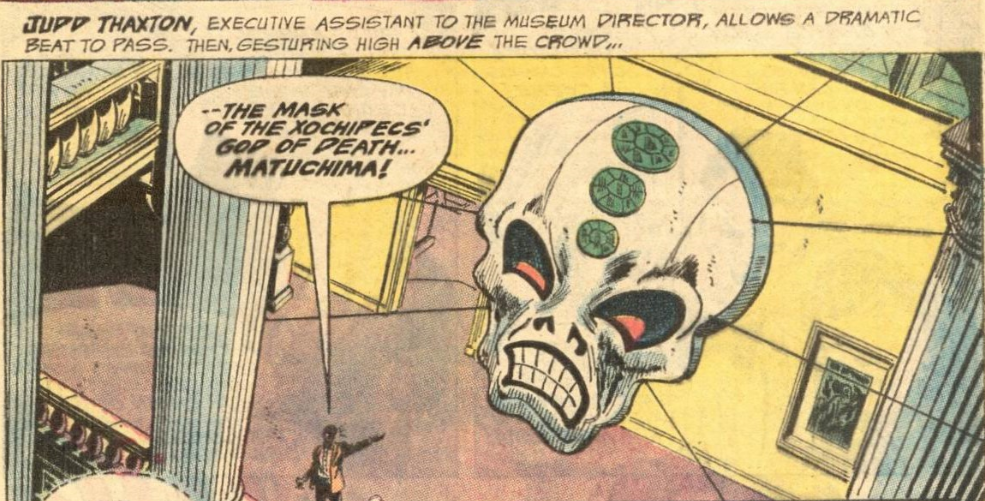 That giant skull is not the actual mask though. For some reason that’s a giant replica that they built to tease anticipation for the real mask, which seems weird, but vintage Gotham. The attendees walk around, eagerly awaiting the reveal of the actual mask, when they hear a scream of terror from the room with the real mask. Everyone goes racing in, only to find a man wearing red robes and the mask of Matuchima brutally beating someone to death on a sacrificial altar. Faux pas. Everyone obviously panics with this revelation, and begin fleeing from the museum for their own safety. Bruce Wayne included. He leaps from a window, quickly changed into his Batman costume, and jumps right back in to do battle with this Matuchima.

And it doesn’t go well! For some reason the man has an incredibly amount of strength and is able to take Batman’s heaviest hits. After a minor tussle Matuchima ends up knocking Batman out, giving himself time to escape. And when Batman wakes up he and Gordon begin planning how to deal with this mysterious killer. The man who was beaten to death ended up being a fourth thief from the beginning of the story, so that isn’t much of a lead. However, establishing that identity they hear that a second corpse has been found outside. It ends up being Marcus Wingate, the director of the museum. Batman finds this very suspicious, and decides that there’s two people who may benefit from the death of Wingate, Spires, the scientist who found the mask and Thaxton, a powerful member of the museum who raises the money. Both wanted Wingate’s job, and Batman suspects one of them murdered Wingate to accomplish this, and he and Gordon split up to find them. Batman decides to go find Spires, and heads to his apartment. Where he finds something alarming.

Yep, Matuchima has beaten Batman to the punch, and is strangling Spires. Not very good! So, Batman starts attacking Matuchima, assuming that he’s now Spires. But, just like before, Matuchima proves to be a shockingly proficient fighter. He attacks Batman, and ends up pushing the Dark Knight out a window. Batman’s able to grab a hold of a flagpole, saving his life. But by the time the climbs back into Spires’ apartment he finds both Spires and Matuchima gone. But, before heading back to the museum to see how Gordon is doing, he decides to snoop around Spires’ home. Batman comes across some notes on the Xochitepec people, including information on their expertise with narcotics and the story of the Mask of Matuchima, which legendarily gives the wearer massive strength and power, before dying brutally.

Batman then heads to the museum where he finds Gordon waiting for him. Gordon lets him know that Thaxton wasn’t in his home, which furthers the idea that Thaxton may in fact be Matuchima. And, as it just so happens, there appears to be another Matuchima assault going on in the museum, directly behind them. Convenient! Batman and Gordon race towards the commotion and find Spires fearfully shooting an entire clip of bullets into the gut of a rapidly approaching Matuchima. The masked man finally drops and dies. They take the mask off the man, and sure enough, it’s Thaxton. But, the story isn’t that simple. Batman explains that Spires is actually the mastermind. He discovered the mask, and the fact that they invented a special narcotic that gave the wearers of the mask incredible strength, but that put a massive strain on their hearts, to the point of heart attack. So, Spires has been putting the mask on other people, forcing them to go mad with narcotic strength, and then watching as they die. Spires is terrified to be found out, and attempt to flee, only to immediately fall off a balcony to his apparent death. And, with that somewhat dissapointing finale, the mystery of Matuchima has been solved!

This is the exact kind of weird, mid-tier Batman story that I’ve grown to love. Yeah, it’s not one of those stories where Batman and Robin wander around the vast wilderness surrounding Gotham City, but it’s still pretty great. It’s a fairly straight-forward detective story, without anything too ridiculous. I like seeing Batman just solving a relatively simple murder mystery. Simple by Gotham standards at least, there was still the potential that the murderer was a supernatural Mexican spirit of vengeance, but that’s just kind of an average night in Gotham City. We get to see Batman get suspects, investigate, and come up with a solution that actually makes sense, and could be pieced together. Which is shockingly a rarity in Detective Comics. Part of me would love to see Batman actually fighting a Mesoamerican demon, but a delightfully convoluted story involving an archaeologist forcing people to commit murders with narcotic masks only to trip to his death is pretty good too, I guess.

“Deathmask!” was written by Archie Goodwin and penciled, inked, and lettered by Jim Apairo, 1973. 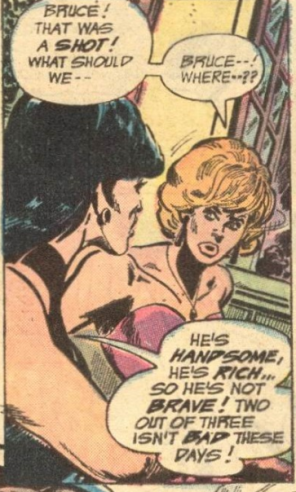