Let the Corpses Tan and the Slavish Devotion to Style 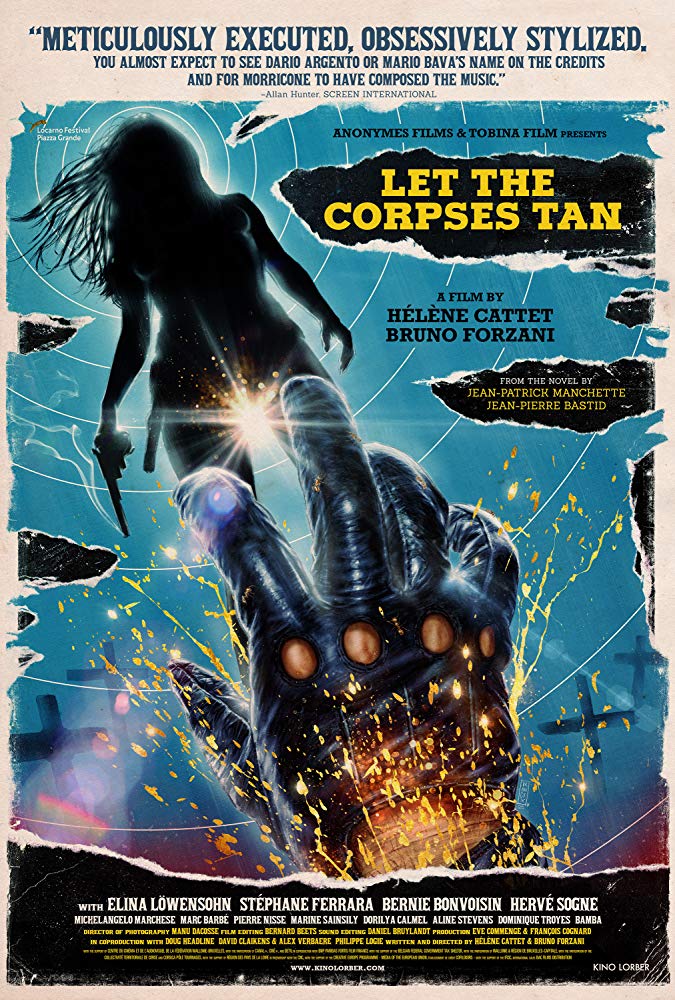 By and large, American cinema is very safe. Occasionally you can come across a strange piece of outsider cinema or an indie flick which really pushes the boundaries of what works in an American movie, but for the most part we’re a very tame country. And I’m not just talking about sexuality in film. We’re certainly repressed in that manner, and there could be entire books written about the hows and whys of that aspect. No, what I’m more referring to is just simple subject matter and execution. We don’t often toy around with strange editing and structure, and when an American film does play with the format of film it usually gets labeled an art film, and resoundingly ignored or rejected. But you know who doesn’t have those weird hangups? The Europeans! If and when you want to start getting into the cinema of countries other than America, it’s entirely possible that you’ll find some of the major films put out by Europe, primarily France and Italy, a little hard to grapple with. They have a much larger basis is surreality than American cinema does, and as a result it can often be a little overwhelming to watch movies that try to be something other than a typical film. It’s not a blanket statement, you can certainly find films from other countries that fit into the typical mold of American cinema, but every now and then you’ll come across a movie that just feels purely un-American. And, when you take a story that could easily become a cookie-cutter American action flick and put it through the prism of European surreality, you can get a truly fascinating experience. Which brings us to a film called Let the Corpses Tan that I saw this weekend. It is a truly unique and impossible to describe film, and I quite possibly have never seen anything like it. I just don’t know if that’s a good thing or not.

Let the Corpses Tan has a surprisingly simple plot. It’s not the story I struggle describing. The story revolves around a group of criminals who are staying at the secluded home of an ageing artist named Madame Luce before robbing an armored car carrying 250 kg of gold bars. Luce’s lawyer is involved in the robbery, giving the rest of the gang access to Luce’s home while they plan their heist. And it goes perfectly. They’re able to kill the police officers transporting the gold, and get away without anyone spotting them. However, on the way back to Luce’s home they come across a woman, her maid, and her son who seem to be stranded in the wilderness near Luce’s home. They stop to help the group, and find that the woman is the wife of an alcoholic author who has run out on her and is currently hanging out at Luce’s as well. So, to avoid any suspicion, they offer to bring the family back to Luce’s where they can continue their plan and escape with the gold. Everyone then returns to Luce’s home, and just start hanging out for a while. The brutish member of the gang sleeps with Luce, the author argues with his wife, Rhino the leader of the gang plans their getaway, and everyone else just kind of bides their time.

Unfortunately, the theft of the gold has reached the authorities, and they’re beginning to look around for potential thieves. And, in the process, two motorcycle cops are told that the author’s family had been wandering around by Madame Luce’s home, and they decide to check in on them and make sure they’re okay. So, the police arrive at Luce’s home, and the gang immediately freak out. They shoot and kill one of the cops immediately, and start a shoot-out with the other cop, who barricades himself in Luce’s home with the lawyer, the author, and Luce herself. The rest of the film then plays out as a night-long stand-off, full of double crosses. The brute and the lawyer end up teaming up against Rhino and the young getaway driver, the two teams each trying to screw over the other and steal the gold, all while the author and his family try to just stay out of everything else and Luce just start huffing ether and falling into a semi-psychotic state, full of bizarre flashbacks to her younger life as a sex-loving conceptual artist who has rejected all society. There’s a lot of double-crosses, there’s a lot of death, and in the end basically everyone dies. The gang members and the cop die, the author and his family escape, and Luce stays behind watching as the car full of gold cars explodes and falls off a cliff, not really too concerned with what’s going on.

This is an incredibly strange film. At it’s core, it’s a very simple film. It’s about a group of outlaws who steal some gold, and then cave in on each other. The plot is simple to grasp. It’s the execution that keeps me from loving the film. Because this movie is stylized within an inch of its life. This movie owes quite a bit to the bizarre Italian and French films of the 1970’s, full of nudity, strange editing, and an overall rambling editing style. It’s a fairly rote noirish plot, with a Western twist, drenched in so much homage that its knees are starting to buckle. And, paradoxically, the strange style of the film is what drew me towards it, and then ended up repelling me from the film. I haven’t seen many of the sort of films that this movie is homaging, but the aesthetic is one that I’ve seen plenty of times, and which I usually find charming. But this film takes the style and seems to pride itself by mimicking the style as closely as possible, at the extent of any sort of watchability. The movie is gorgeous, the plot is actually pretty followable when you think about it, but it’s hard to keep from getting distracted by how strange it is. I think I could love this movie if it was made in a more straight-forward manner. Which, I guess is just me failing to appreciate something outside my comfort zone. But, I think that you still owe the audience to make something that’s enjoyable to watch. This is a challenging film, trying to question how editing and structure can change a simple story, but there’s just something about the film that I just found myself irritated by. It ends up going away from homage and into the real of pastiche at times, becoming a little too self-satisfied with how cool it is, at the expense of creating a film that functions. There’s just a little too much flash, and not enough foundation.

Let the Corpses Tan was written and directed by Helene Cattet and Bruno Forzani and released by Anonymes Films, 2018.