Hi there everyone, and welcome back to yet another installment of Bat Signal, my ongoing quest to read every issue of Detective Comics, in random order, and with essentially no context. And we’re going to be talking about one of the roughest types of stories there is again this week, everyone. That’s right, the random number generator gods have frowned upon us and given us the second part in a three part story, meaning we don’t really get to understand where the story began, or where it goes. So, it’s going to be pretty unsatisfying this week, folks! Which, is something that I feel like we’ve become used to when happening to pull Part Two’s of stories. But this week is something special. Because this issue? It makes no goddamn sense.

The story begins with a bang, showing us a screaming man shambling out of the burning wreckage of some sort of chemical waste warehouse. No idea who he is or why he’s in there, but the man is in pretty rough shape, and things get even more dire when the fire department shows up. Because the fire fighters obviously want to help this strange, burning man, but when they race in to rescue him they find that the merest touch melts them. The Corrosive Man ends up killing a firefighter, completely by accident, which merits some police involvement. Unfortunately, this results in two more deaths, which is when Batman arrives on the scene. The quickly gets a hold of the situation, and grabs a fire-hose, blasting the Corrosive Man with it, full tilt, sending the Corrosive man careening through the air and back into the warehouse. Batman then gives chase, following the man into the warehouse to continue their brawl.

But, before finding out how this battle ends up, we randomly cut to a different part of Gotham City where a pudgy, bumbling little man named Webley gets out of his car and walks into a large home that’s decked out in incredibly macabre decorations. He then heads down into the cellar of the building, and finds himself in a room full of medieval torture implements, and a man dressed as Dracula hanging out in a coffin. But, this isn’t the second time we’ve talked about actual vampires, this is just some weirdo who calls himself Mr. Kadaver. And, Mr. Kadaver is quite a character. He lives in the basement, hanging out with weird torture devices, and seems like spend his time either pretending to be dead, or using make-up to look like he’s been brutalized. Not quite sure what this guy’s deal is. He apparently is in charge of Webley, and has commanded him to go out into the night and kill some man named Dalton Walls who is visiting Gotham from California. But, Webley has apparently killed the wrong person, in the previous issue I guess, and now Kadaver has ordered him to go out and find the real Walls, and kill him.

With that we hop back to Batman, who is walking into the warehouse where the Corrosive Man was thrown into. Batman finds the strange man sadly sitting in the warehouse, struggling to figure out what’s going on with himself, and Batman doesn’t exactly deescalate the situation. The Corrosive Man immediately freaks out when seeing the dreaded Batman walking up to him, and starts yelling at him to go away. So, Batman responds by throwing some chains around him, tying the confused and powerful man up.

And, as you can see, this doesn’t work very well. The Corrosive Man melts straight through the chains, and is not happy. He throws the melted chains at Batman, knocking the Dark Knight unconscious. But, the Corrosive Man doesn’t really have a beef with Batman, so he shambles out of the warehouse, a new goal in mind. Mr. Kadaver! Apparently Kadaver was somehow responsible for the accident that turned him in to the monster he’s become, so he decides to track Kadaver down and melt him. Unfortunately, this proves to be difficult, because when the Corrosive Man tries to get into a truck to drive to Kadaver’s house, he just melts down through the chassis, and realizes he has to just walk there.

Once the Corrosive Man is long gone, Batman wakes up from his brief chain-related nap, and realizes he needs to go out and stop the monster. He swings away, and we end up slipping away from the Dark Knight and into the path of Webley, who has found himself in a small shanty town in a Gotham alley. Webley walks up to the group of homeless people, and begins eavesdropping on them. And, by pure happenstance, the men start talking about where they’re from, and Webley is able to identify Dalton Walls when he explains he’s from California. Webley then starts loudly shouting that there’s been a murder committed by some mysterious serial killer who has apparently been stalking Gotham, causing the men to freak out. This gives Webley the time he needs to  brutally stab Walls to death. Unfortunately, right when he does this Batman happens to fly by, and he’s not exactly pleased. But, we’ll have to wait to figure out what Mr. Kadaver’s deal is, and what the Corrosive Man will do to them for some future installment whenever the random number generator gods decide to let us check it out.

So, yeah. This is a pretty typical example of the second-issue problem we frequently run into in this project. I picked Detective Comics over Batman when I first started this project specifically because it seemed like Detective Comics would lend itself more to one-shot stories, where I wouldn’t run into this problem as much. And, I still think that that was still the right call, but it can really be frustrating when I find issues like this that don’t have a satisfying beginning or end. But, at the same time, I have to be aware of the fact that that complaint stems completely from the absurd rules that I imparted upon my self for this project. These stories aren’t meant to be read this way, and I shouldn’t really complain about them because I do. And yet, this issue is incredibly weird. We aren’t really given any sort of explanation of what the previous issues contained, and we’re just tossed into a whole bunch of insanity, having to deal with the Corrosive Man, Mr. Kadaver, and the murdering Webley without really any insight into who they are, what their deals are, and what’s going on. I would hope that reading the entire story would make things make more sense, but this issue really feels like a lot of stuff being thrown at the reader without any real connective tissue, which makes me question how well it functions even with its other parts. It’s one of the weaker issues I’ve pulled in a while, but there’s enough weird elements to at least make this a decent little read.

“Night People – Part Two: The Corrosive Man” was written by Alan Grant and John Wagner, penciled and inked by Norm Breyfogle, colored by Anthony Tollin, and lettered by Todd Klein, 1988. 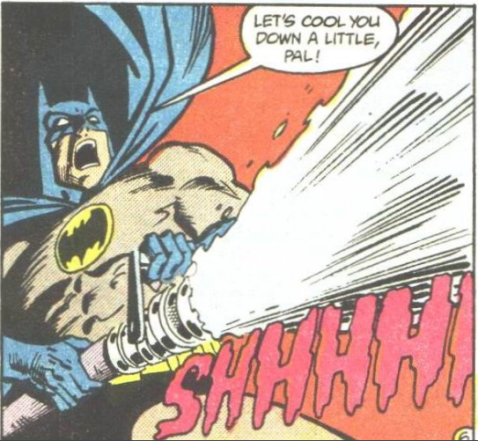 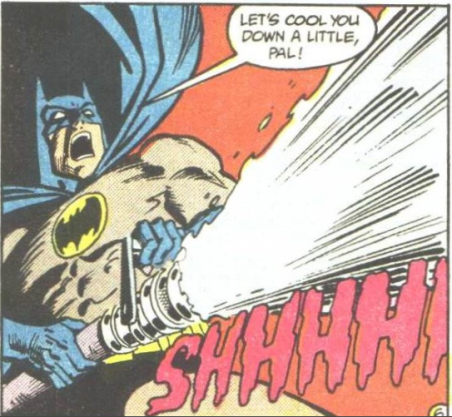