BlackkKlansman and the Sale of Hate

I’ve said it before, and I’m apparently saying it again, but we’re having an absolutely stunning summer filled with fascinatingly searing satiric films. The impetus for these films can sometimes be a little nebulous, since the actual process of making films is much more involved and time-consuming than most of us actually realize, and it’s hard to tell how recently these filmmakers had these ideas. It’s likely that the heightened social climate we find ourselves in have had a major role in these films being made, but it can often be hard to get a real read on. This film however, makes it a little more clear. Technically Spike Lee began work on this film before the election of 2016, but things really started rolling late last year when the absolute insanity of the current administration was in full swing, and the rise of blatantly racist organizations was suddenly a thing people had to worry about once more. And, with the horrific events of the Charlottesville rally fresh in everyone’s minds, Spike Lee decided to bring a fascinatingly strange true story to life to remind us all that the KKK are the absolute worst, and shockingly easy to trick. It was going to be a big, boisterous, funny, and captivating look at a black policeman who infiltrates and humiliates the Ku Klux Klan, and it looked like it was going to be an incredibly hard tightrope to walk, especially in the world we find ourselves in. And, wonderfully, I think that Lee was able to walk that tightrope perfectly.

The film tells the story of Ron Stallworth, a young man who has arrived in Colorado Springs, Colorado with the hope of becoming the first black police officer in Colorado Springs’ history. And, seemingly just to meet some sort of diversity quota, Stallworth is hired by the police department and promptly pushed into the records room to be forgotten. Stallworth then quickly realizes that his fellow police officers have next to no experience dealing with black people, and offers his services in a more detection-focused position. And, realizing that they do have a lack of insight into black culture, they agree, and decide to make Ron an undercover agent so he can go and report back to Colorado Springs’ apparently burgeoning black liberation community. He goes to see a speech by a member of the Black Panthers, and ends up meeting a young woman named Patrice who runs the Colorado College’s black student union, and who immediately catches Ron’s eye. His first mission is more or less a success, giving the police some insight into these meetings, and he’s emboldened to keep looking into specifically black things. Instead, he looks through the Colorado Springs newspaper, and finds an advertisement attempting to recruit members to the Ku Klux Klan. This intrigues Ron, and he ends up calling the number, and chatting with a man named Walter. Ron pretends to be a white racist, and quickly gets invited to meet up with the local chapter of the KKK so they can investigate what exactly they’re up to. Which, immediately proves to be a problem, since Ron is black. But, Ron’s captain gives him permission to start his own investigation, and he begins working with a white Jewish officer named Flip Zimmerman to be the in person Ron Stallworth, while the real Ron takes over on the phone.

Flip is then sent into the belly of the beast, and discovers the rather pathetic lives these KKK members lead. He plays his part well, and befriends Walter. However, he does find one member of the group, a man named Felix, to be incredibly suspicious of him. But, for the most part, Flip is welcomed into this strange community, and is able to tell that other than some drunken bluster, they aren’t really that fearsome, throwing the whole investigation’s worth into question. Meanwhile, Ron is working on getting his fictitious self made an official member of the KKK, and ends up talking with, and befriending, the head of the KKK, David Duke. Things even reach the point that Duke announces he’s going to come out to Colorado Springs for “Ron’s” initiation. Which is going to be at the same time that Felix has decided to amp things up. He’s brought in another racist to help them create a bomb from C4, and they begin planning a way to kill Patrice, since they blame her for inciting racial equality in Colorado Springs. And, to make things even more complicated, the real Ron Stallworth is assigned to be Duke’s police protection, forcing him a Flip to be in the same place at the same time, both ostensibly named Ron Stallworth. It’s an awkward time, and both Ron’s are forced to flee the initiation at one point when they realize that the bombing is about to happen. And, unfortunately, they arrive just too late. But, fortunately, the racists are idiots, and because they didn’t communicate properly they end up blowing themselves up, killing off a bulk of the Colorado Springs chapter of the KKK. Ron and Flip are then lauded as heroes, primarily because they were able to expose several members of the KKK to the FBI, and they’re even able to give David Duke a call and tell him how easily they tricked him. However, they’re then ordered to bury the existence of this investigation, told to go back to normal. However, everyone involved is hopeful that this mission will help race relations, and end organizations like the KKK. Which was false.

BlackkKlansman is a movie that probably shouldn’t work. The basic premise, a black police officer helps infiltrate and humiliate the KKK, is one that seems more suited for a comedy sketch than a full film, and it’s made even more ridiculous by learning that it’s a true story. It’s about one of the most hateful organization in American history, and features the planned murder of several people. And it’s funny! And yet, Spike Lee and company were able to make it work. It’s a big, crazy story, and Spike Lee told it in a big and crazy manner, giving us a film that succeeds in being funny, inspirational, heartbreaking, thrilling, and thought-provoking. John David Washington, who I’ve never seen in a film before, was absolutely terrific as Ron Stallworth, giving us a man who seems uncomfortable in ever setting he’s placed, and yet completely in tune with who he is and what he wants to do. He gives a terrific performance, and I definitely want to see what he’ll do next. He’s even able to hold his own against the great Adam Driver, who I almost always love, and who is predictably great as Flip.  And, it’s hard not to see how great all the various racists in the film are. Everyone, especially Topher Grace as David Duke, shows us how these people are. They’re weaselly cowards who try to puff themselves up with pretensions of masculinity and violence, all to hide the fact that they’re actually just weak failures who can’t accept that there’s nothing special about them. They’d almost be tragic if they weren’t so repellent, and the film does a good job at looking at them.

Which is something that the film does a very good job with in general. They easily could have made the KKK members stereotypical rednecks, without any real characterization and just a bunch of yokels who can barely string a sentence together. But, instead, Spike Lee seemed to make an effort to show the strange, horrible appeal of hatred. It’s easy. It’s so easy to just hate other people, and blame them for all of your problems. None of the racist assholes portrayed in this film have anything going for them. They’re general failures in life, and the only thing in their lives that can give them any sort of happiness is by finding everyone who is different than them somehow worse. Because it’s easy to sell hate. Human’s seem predisposed to fear of those who are different from them, and giving into those fears is the easiest and laziest thing imaginable. And there’s always going to be horrible people who are willing to prey on those fears and hatred and gain influence. There’s a reason that this film ends with some footage of the Charlottesville riots, and the violence that ensued. Because, even though we’d like to think that things have gotten better in the world, and that we’ve progressed, that’s sadly not the case. We still live in a world where cowards flock together and violently lash out at their own insecurities. We still live in a world where hate is commodified and we all need to work hard to create the world we want to live in. We all need to be like Ron Stallworth. We all need to be better. 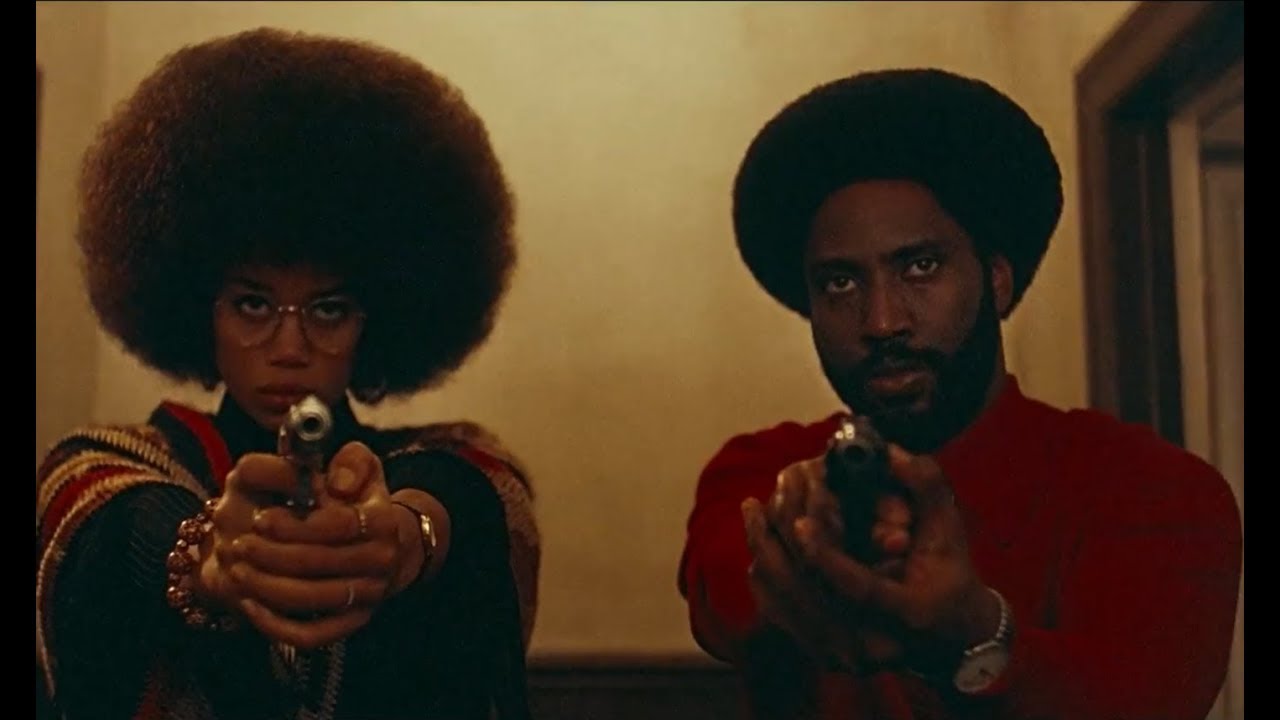