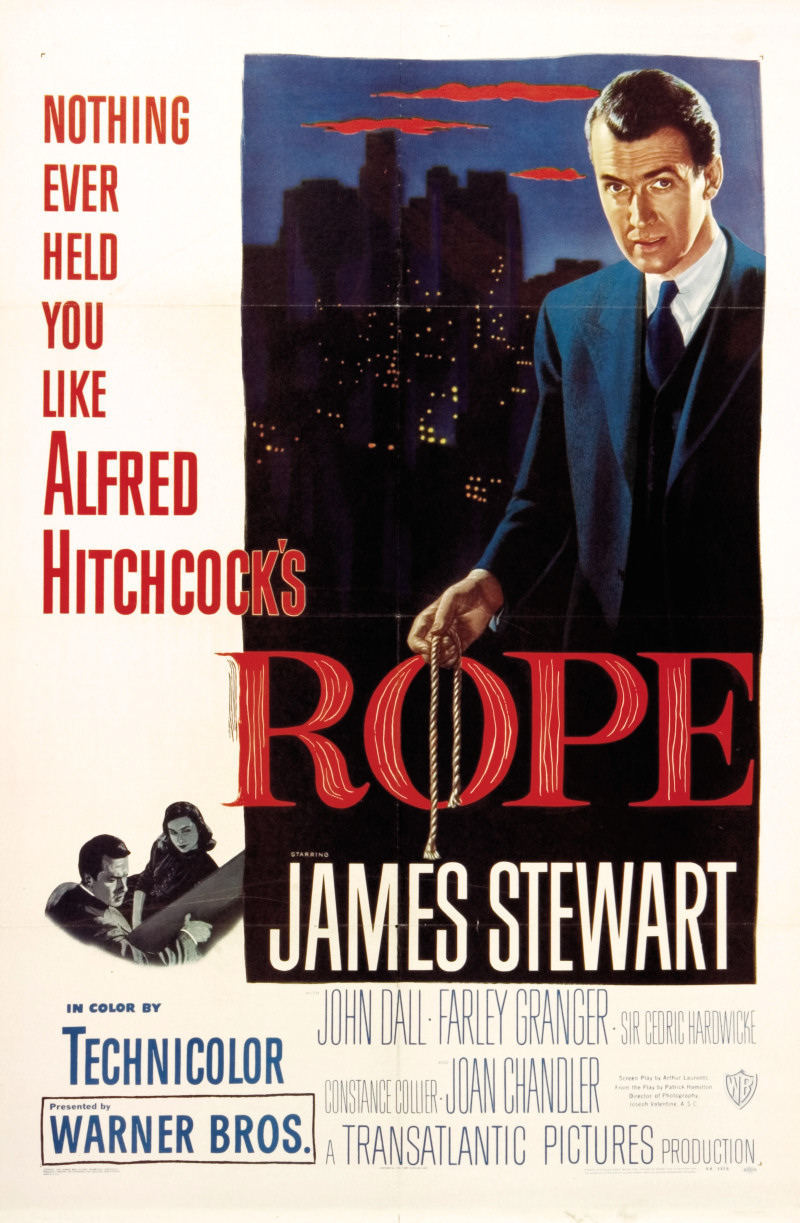 Folks, now that we’ve reached the late-40s here on the Cinematic Century, you’re going to have to get ready to talk about Alfred Hitchcock all the damn time. I love Hitchcock’s films. The man is very problematic, but the films he created are some of the finest of this era of American cinema, and so many of the films I’ll be talking about in the coming weeks will have sprung from his mind. Which brings us to my favorite film of 1948, Rope. This film is wonderful, and the first time that I saw it I was blown away, becoming yet another example of a movie that I was upset it had taken me so long to check out, because I could have had it in my life longer. Although, it did have some serious competition for my favorite film of the year. Primarily from the absolutely wonderful psychological thriller masquerading as a Western, The Treasure of the Sierra Madre. Please check that film out if you like Westerns or Humphrey Bogart, because it’s an absolute delight. There are also two films that have been on my watchlists for years, but I’ve never gotten around to, which presumably could give Rope a run for its money. Bicycle Thieves and the Red Shoes both came out in 1948, and by all accounts they’re terrific examples of the power of cinema, both becoming pretty quintessential examples of the types of film that people watch in film school. I’m sure those films are great, and I really should try to be better about filling in some gaps like them, but I also can’t imagine that I would like them more than I like Rope. Because Rope is phenomenal.

Rope began life as a play written by Patrick Hamilton that more or less told the tale of real-life murderers Leopold and Loeb. The play was a tense thriller that followed two young men who murdered a fellow student before hosting a party in the apartment where the corpse is hidden. The play was a moderate success, and was adapted for BBC as a teleplay, which caught the interest of Alfred Hitchcock, specifically the fact that the televised production used very long, unbroken takes. So, when it came time for Hitchcock to begin adapting Rope into a film, he decided to do something pretty unconventional with it. Hitchcock had already done a film that took place almost entirely in a very confined set with Lifeboat, but this time he’d do one better, and make a film that never leaves one location, and is designed to look like it’s one prolonged take. It isn’t, and if you know to look for the cuts they’re pretty obvious, but everything about the film does its best to appear to be in real-time. They designed a special set that had removable walls so that the camera could weave between rooms while people would rapidly move around furniture to make everything seamless. Hell, they even created a remarkably impressive model of New York outside the windows, complete with moving clouds and a sunset that slowly occurs on the horizon. It’s a marvel of cinematic technique, which makes it a shame that it wasn’t more beloved when it came out. Either because of the experimental nature of the film or the potential gay subtext within the film, people at the time didn’t respond to Rope, and it faded into obscurity. But, over the years as the public’s perception of Hitchcock and his work went up, the film finally found its audience and is rightfully hailed as one of Hitchcock’s finest films. 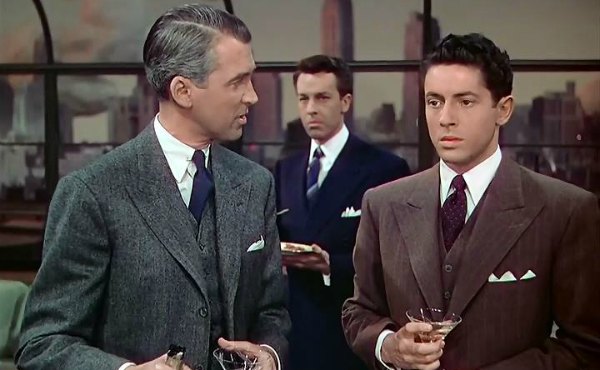 Rope immediately opens up on the murder of a man named David Kentley in the apartment of his murderers, Brandon Shaw and Philip Morgan. The two men live together and have apparently become convinced that they’re better than everyone. And, to exemplify this fact, they decide to pull of a perfect murder, and kill their friend David to prove that they can get away with it, because he’s a lesser person. Brandon is clearly the brains of this operation, and Philip almost immediately becomes disgusted by what they’ve done. But, Brandon ignores him, and moves their plan along to the next phase. They place David’s corpse inside a chest in their living room, and get ready for a party that they’re about to have. And, who is invited to this party? Why, David’s parents, his girlfriend, his best friend (who recently broke up with David’s girlfriend), and their prep-school headmaster whom they claim gave them the inspiration for this murder. It’s an act of hubris that they have planned to prove that they’re criminal masterminds, and they even go so far as to set up the food and drinks on the chest that contains David’s body.

The guests then begin to arrive, and we’re treated to a whole lot of uncomfortable mingling while Philip starts to lose his mind. Everyone is pretty confused why David isn’t at the party, but Brandon keeps making excuses for him, saying that he’s probably forgotten the party and is just busy, which seems to placate everyone, even though it feels strange that David’s parents would attend this party without him. But the headmaster, Rupert Cadell, is immediately suspicious, and can’t quite put his finger on the reason why. Philip is sweating bullets, starts drinking too much, and is acting like he’s clearly trying to hide something, all while Brandon just schmoozes the guests and does his best to assuage their suspicion of Philip. And, to make things even weirder and more uncomfortable for Philip, when they finally decide to sit down in the living room and eat some dinner, Brandon strikes up a conversation about why it should be okay to murder people. Most everyone gets really into the conversation, especially Rupert, and it eventually reaches some really macabre places.

But, eventually, David’s father gets too upset by the conversation, and forces them to end it. Which coincides with everyone else reaching the end of their interest in the party. So, everyone prepares to leave, and Brandon even tosses in one final sick signal by giving David’s father a stack of rare books tied up with the rope that they just used to strangle his son. But, as everyone is getting ready to leave, Rupert finally gets a solid clue. He finds David’s monogrammed hat in their closet, and realizes that David must have been there recently. Rupert leaves with everyone else, giving Brandon and Philip a chance to breathe a sigh of relief and begin planning how they’re going to dispose of the body. Unfortunately, Rupert comes back, in theory because he forgot his cigarette case. He strikes up a conversation with the boys about David, and slowly starts to hypothesize that they viewed him as a lesser person, and might have murdered him. Philip is horrified, but Brandon is thrilled, figuring that Rupert realizes how great they are, and eventually admits what they did. And he doesn’t get the response he was hoping for. Rupert is horrified and disgusted that they took his views on philosophy and used them to justify murdering a friend of theirs for no reason. This causes Philip to panic, and he ends up pulling a gun on them, threatening to kill himself and them. Rupert manages to get the gun from Philip, and fires it out the window of the apartment to draw some police attention so that the two men can be arrested. He then stands guard over the body as the police sirens get closer and closer. 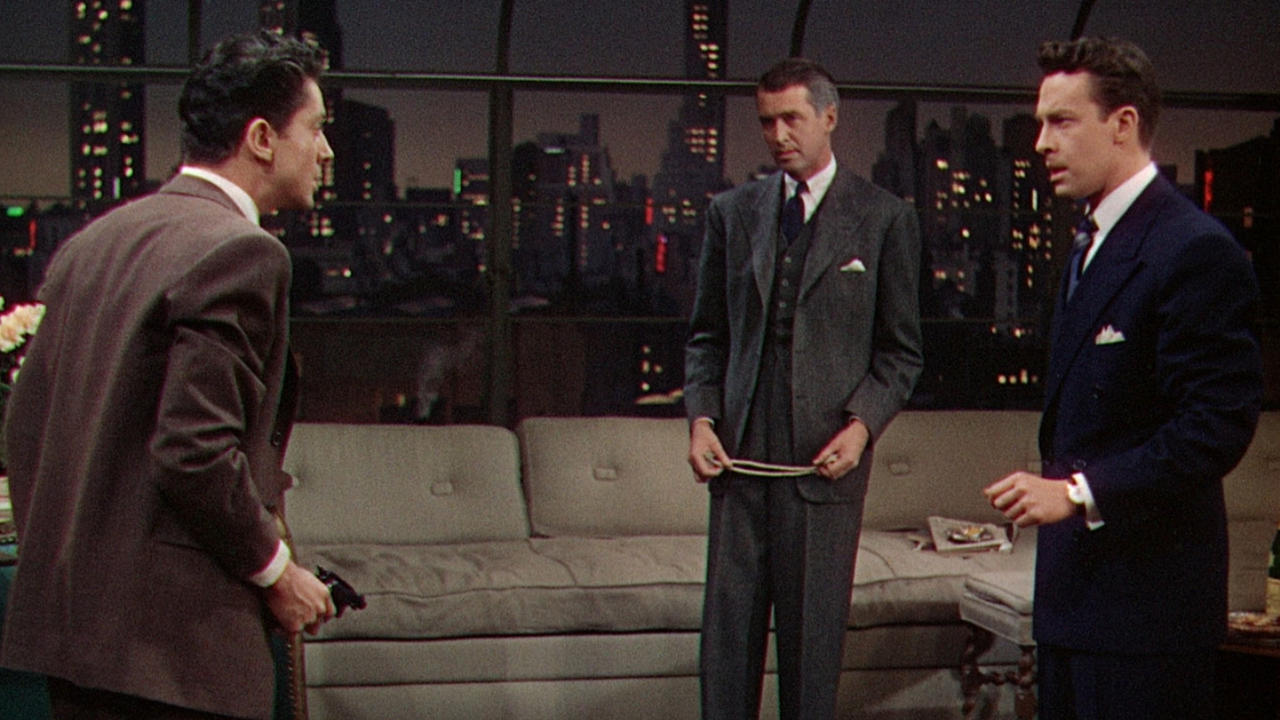 Rope is an incredibly impressive film. If you watch it from a technical standpoint, it’s frankly remarkable what Hitchcock was able to to. Once you know that the film is full of tricks, and that it’s not actually one long prolonged shot, you can start to catch the seams, the little cheats that Hitchcock used to make it appear that way. But, that doesn’t take away from the fact that this is a brilliantly orchestrated film. Normally, I’m rather adverse to the idea of films that look like plays. I enjoy live theater, but films should be something different. There are plenty of films, primarily from the 1930’s and before that really just feel like they put a camera in front of a staged production, with little to no cinematography, and those types of films really rub me the wrong way. They just come off as bland, and very un-cinematic. And Rope is anything but bland. It takes a relatively simple story, a deceptively simple set, and turns it into something fascinating. Hitchcock is a master of tension, and by stuffing a bunch of characters into a room with a hidden corpse while they attempt to have a lovely dinner party we get to see that flair for tension on display. It’s a film that grabs your from the first frames and keeps you enthralled until the sound of the sirens come roaring in. It’s a timeless story, full of terrific performances that end up meshing to create a near perfect thriller.

This film is remembered for it’s technical skills, and often the homosexual subtext between Brandon and Philip, but there was something about this film that really stood out to me on this watch. Rich sociopaths really have never changed, have they? Brandon and Philip are two entitled assholes who assume that they’re better than everyone, and that that allows them to kill people. They don’t care about the repercussions, and they just do what they want, in order to prove that they’re the best humanity has to offer. Honestly, it was a little surprising seeing their dynamic, and seeing how it’s replicated itself in reality. Brandon is the domineering mastermind behind the killing, and Philip just kowtows to him and goes along with it, not knowing what to do without his approval. And, if you’re familiar with real-life murderer duos, especially the two that committed the Columbine murders, you’ll see that Hitchcock kind of nailed the dynamic between these types of people. He obviously had no idea how much reality would imitate his art, but it’s frankly striking how familiar this film can feel in modern day. Which, is a shame. The film spends its last scene explaining why having such a mentality, that other lives are worth less than your own, is a destructive and faulty way of thinking, and yet, certain members of humanity just can’t seem to get that message.

Rope was written by Arthur Lorents, directed by Alfred Hitchcock, and released by Warner Bros. Pictures, 1948. 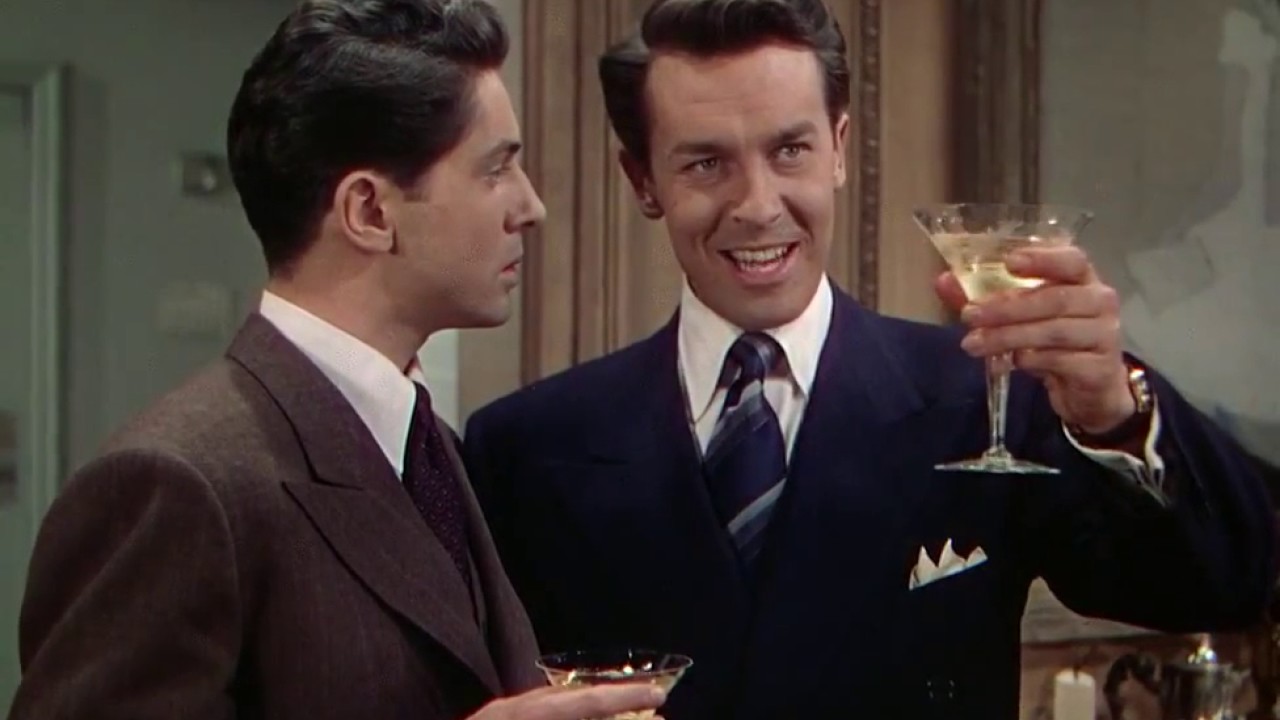