The Familial Fantasy of the Adventure Zone

I get to talk about a lot of things that interest me on this site. I mean, the whole thing is basically just a cavalcade of things that I’m into, barring the occasional dreadful DC movie, so you would think that there aren’t many aspects of my pop culture tastes that don’t get featured here. But, oddly enough, there is one big one. And I think it’s just because I’ve never found out a satisfying way to write about it. Podcasts! I listen to podcasts constantly, they’re a major source of entertainment during my day job, and over the years I’ve become absolutely addicted to them. I listen to movie podcasts, political podcasts, narrative podcasts, history podcasts, and really anything else that can pique my interest. But, it’s not really easy to write about them. I can give you a list of the shows I listen to, and why I love them, but there’s not really an overarching narrative or anything to discuss. Which is why the only podcast I’ve really discussed on the site before has been the wonderful Welcome to Nightvale series, which has released two novels during the course of its run, giving me an excuse to talk about it. And, thankfully, another of my favorite podcasts of all time has decided to do some cross-medium growth, giving me a chance to talk about it.

Now, I’m actually not sure what kind of reach this show has. In my personalized internet echo chamber I feel like everyone is aware of, and obsessed with, the bizarre adventures of the McElroy Brothers. In case you’re unfamiliar, they’re three brothers from West Virginia who have amazing chemistry, and a preternatural ability to make the dumbest things in the world hilarious. They started off with a great podcast called My Brother, My Brother, and Me, which is ostensibly an advice show, but is basically just a forum for the brothers to goof off on. It’s a spectacular podcast, and one of my favorites, but it was their spinoff that really connected with me. It started as a bit of a weird gag. They were going to do a special episode where they played Dungeons and Dragons with their dad Clint, and not really take it seriously. But, the episode was a hit, and ended up becoming it’s own show, which was called the Adventure Zone. It told the tale of three incompetent adventurers gallivanting around an elaborate fantasy world while trying to find mystical artifacts, and slowly but surely became one of my favorite works of narrative fiction in the last decade. Not just narrative podcasts. Of all narrative. It’s hilarious, sweet, genuinely emotion, and just all around one of the most wonderfully realized stories I’ve ever heard.

The Adventure Zone continues to this day, but the first arc has finished. They’ve wrapped up the main adventures of Magnus the fighter, Merle the “healer,” and Taako the wizard, and have moved on to new stories, new characters, and new adventures. And, while I’ve loved where the show has evolved, I don’t know if anything will ever be able to top it’s first story, which has come to be known as the Balance Arc. And, as a way to continue to revel in this wonderful story, the McElroy family have partnered with artist Carey Piestsch to create a graphic novel adaptation of the first chapter of the Balance Arc, “Here There Be Gerblins.” I assume they plan to do the rest of the Arc eventually, and if this book is any indication of what they have in store, I’m very excited. 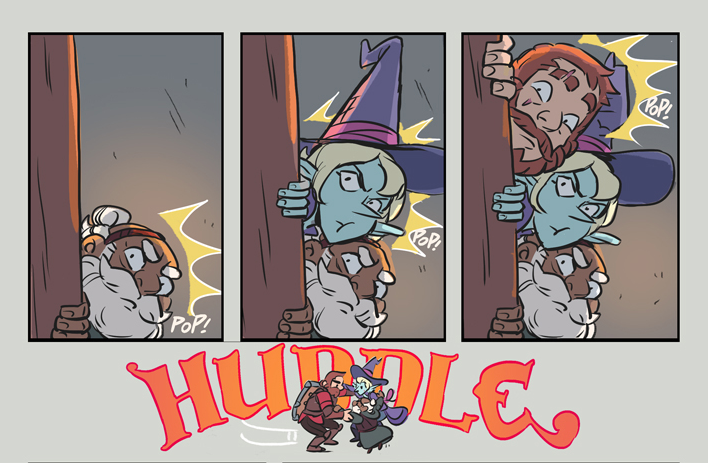 Now that the entire story has been completed, it’s easy to recognize that things get better. This is honestly probably the weakest chapter of the entire Balance Arc, but that’s to be expected. It’s the introduction. It literally was just based off of a Dungeons and Dragons module that anyone could buy, which necessitated them changing some of the names of characters and locations for this book. Eventually the brother who was crafting the story for them, Griffin, became more comfortable with the world that he wanted to create and started branching out into original stories, but it all had to start here. The world and he over-arching plot that ended up dominating The Adventure Zone would comer later. What this chapter needed to do, and what this graphic novel really captures perfectly, is establish these characters.

The premise of this initial arc is very simple. It follows our protagonists as they attempt to pull off a disastrous body-guarding job. We’re introduced to our characters, and see them incompetently fight off a bunch of goblins, fail at protecting the people they were hired to protect, fight off an army of marauding goblins, and get involved with an evil wizard who is trying to acquire a powerful magical artifact. We get to see Magnus, the human fighter who is constantly rushing in with little thought to what’s around him, purely focused on blind heroism. We also see Merle the blissed out dwarf who is able to bring out powerful healing magic thanks to his belief in the god Pan, as long as he remembers he has that capability. And we have Taako, the vain and self-serving elvish wizard who is obsessed with keeping himself safe and rich enough to start up a career as a professional chef. Together fail their way up, meeting a variety of strange and goofy creatures before finally coming into contact with an incredibly potent magical artifact that could threaten to destroy the world. And, they don’t manage to stop it from destroying a city. But, they do probe themselves to be at least somewhat competent when it comes to these artifacts, and they’re introduced to a much larger world, one where they’re brought into a secret organization tasked with saving the world, and bringing us with them on this world-spanning adventure.

I was very curious when this project was announced about how they would pull it off. The podcast is a wonderful experience full of fun storytelling that primarily stemmed from improvisation. Griffin McElroy is a hell of a story teller, and he devised a fascinating world and story for his brothers and father to play around in. But, it’s still a role-playing game. You need to be able to react to what the players are doing, and they drive the story. It’s a fun little fantasy adventure, but it’s also a podcast where four family members goof off with each other. The podcast is full of goofy bits where they mess with each other, make fun of the mechanics of the game, and just generally don’t take everything too seriously. And I wasn’t quite sure how they were going to bring that aesthetic to the comic. But, I think they did a good job. The comic doesn’t get too meta, we don’t see the four of them around a table or anything, and for the most part it’s just the story of the three characters. But, every now and then Griffin himself will pop in, as the DM, and either give them advice or heckle them. It’s not a direct, word-for-word adaptation of the first arc of the podcast, but it also shouldn’t have been that. It’s it’s own thing. It takes the fun premise, some of the bits, and then runs with it, telling a story that’s obviously familiar, and yet new and refreshing.

This graphic novel didn’t need to be the podcast. We still have the podcast. It needed to do its own thing, while bringing the most important aspect of the podcast to life. The interactions. Because I really and truly think that that’s why this series has succeeded. The plot is great, the twists are wonderful, and I’ve come to really appreciate the characters and the arcs that they built for themselves, but the thing that drew people in, and kept them coming back week after week was the people themselves. The podcast let you glimpse into the life of these three brothers and their dad, just goofing around and having a good time. You end up feeling like one of the family, just listening to some friends having a good time. And you still get that from this book. Yeah, we don’t have the meta-narrative of the family hanging out and spending time together, but we still get to see these characters having adventures and growing closer as friends. I’ll be interested to see how these adaptations will continue to bring the Adventure Zone to life, but as long as they don’t lose sight of the power of some family members goofing around, I think they’ll go far.

The Adventure Zone: Here There Be Gerblins was written by Griffin McElroy, Justin McElroy, Clint McElroy, and Travis McElroy and illustrated by Carey Pietsch, 2018.